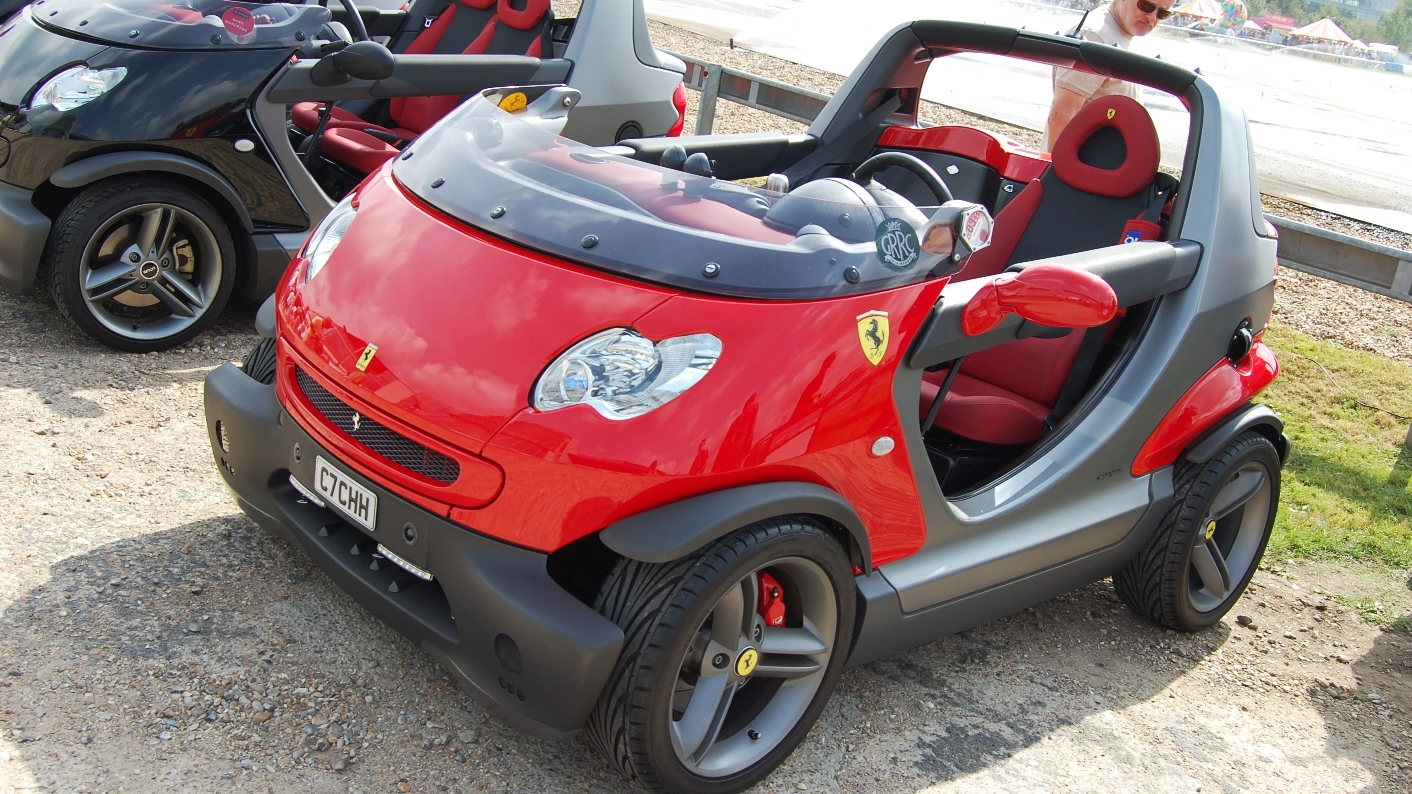 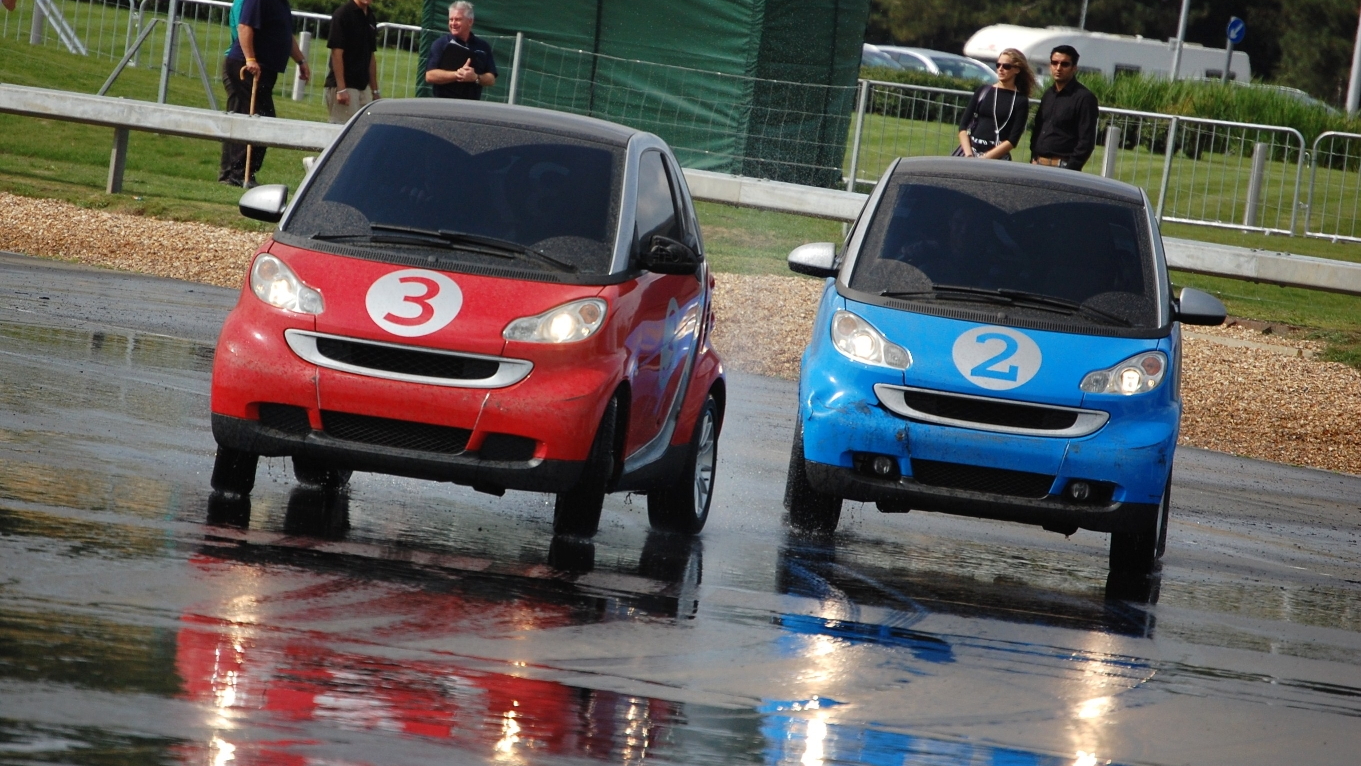 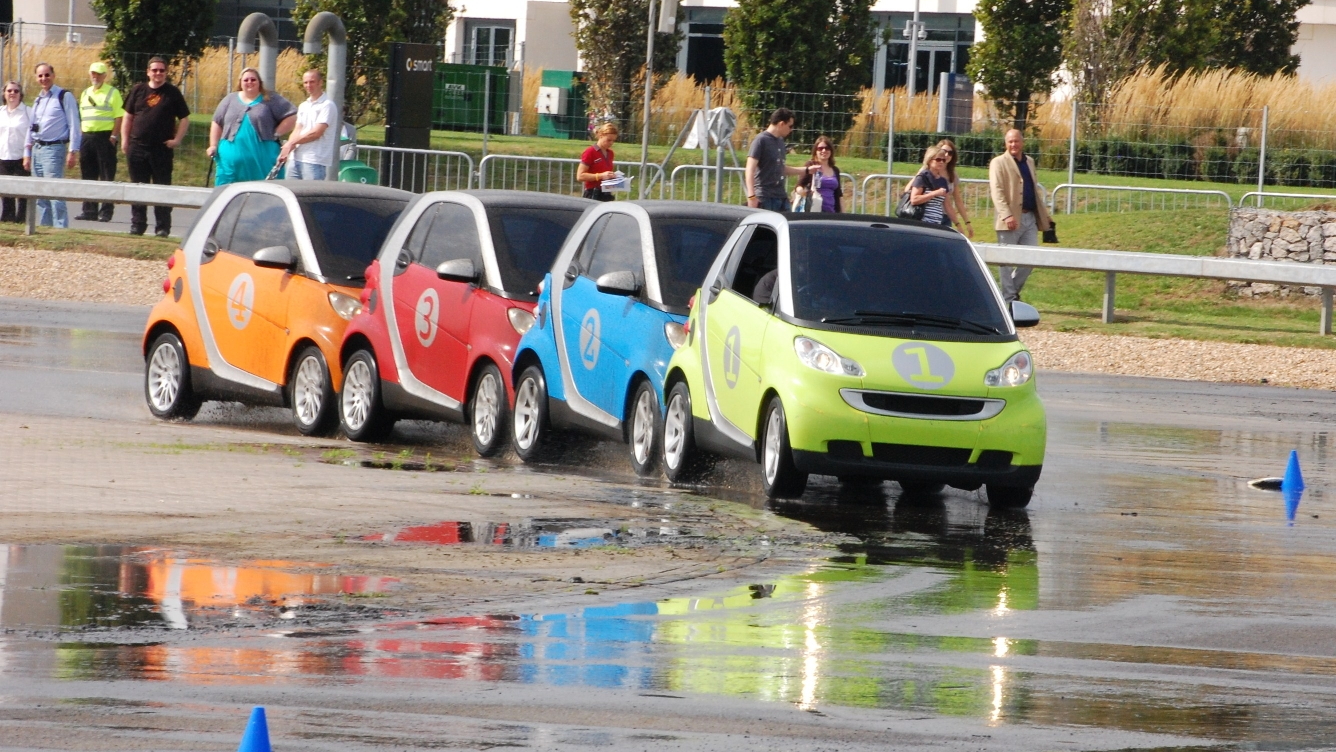 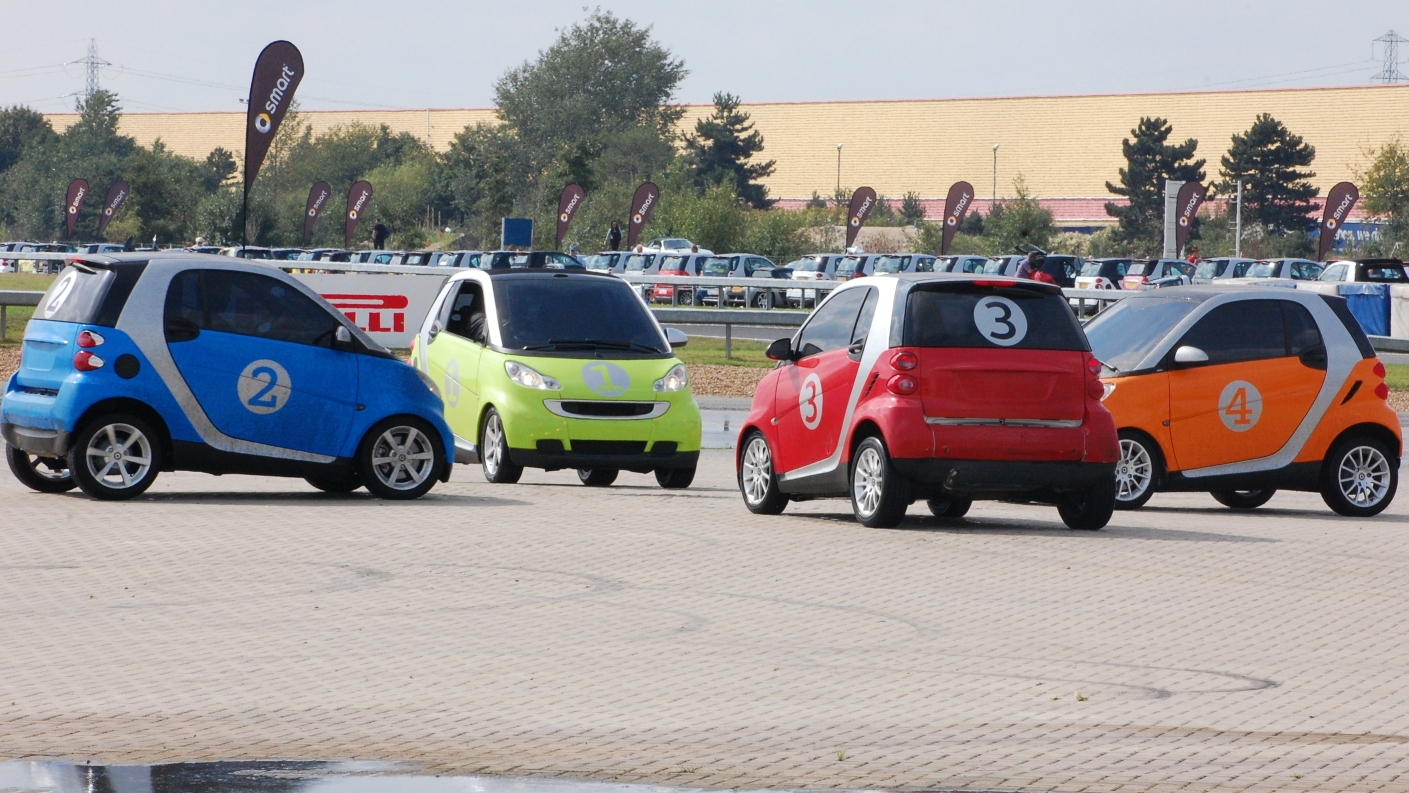 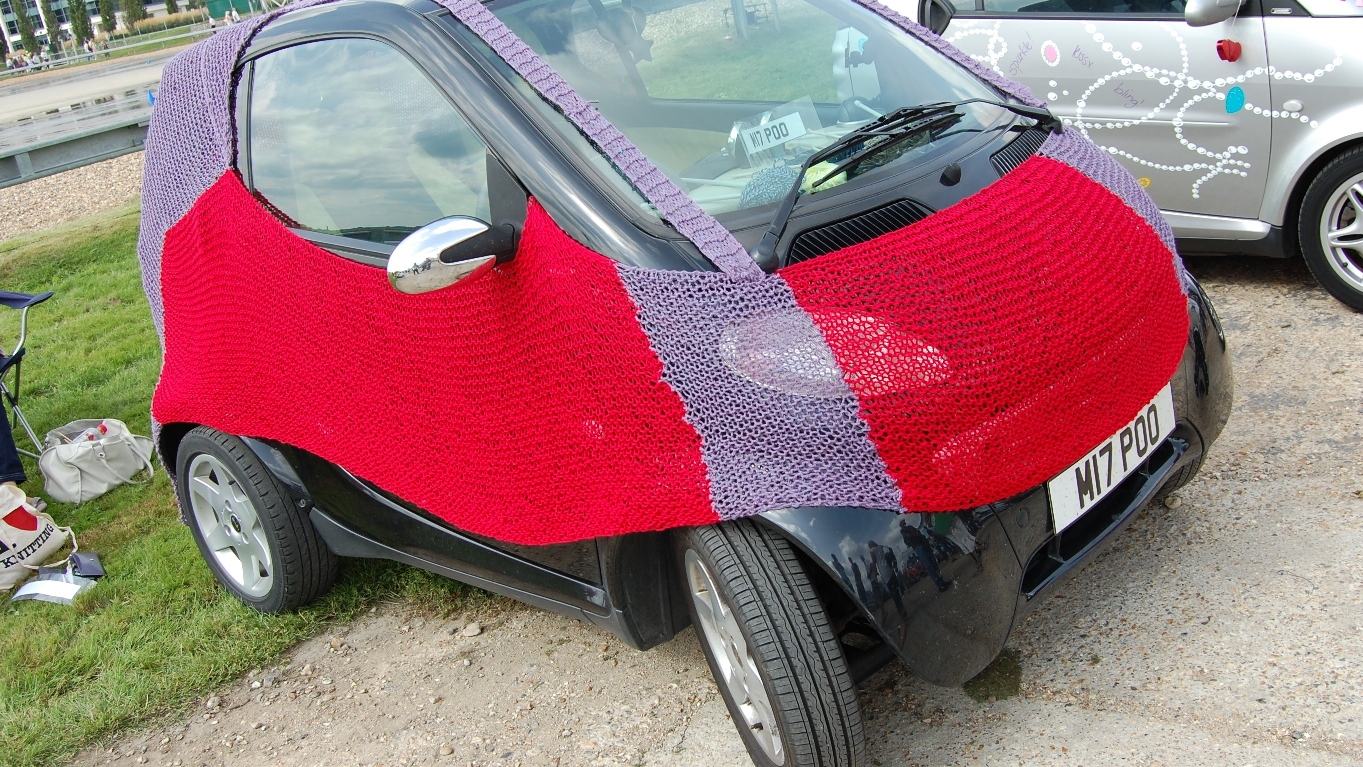 Whilst the U.S. might not be warming to the 'Smart car' quite the way owners Daimler might have hoped, the same can't be said for the car's reception in Europe.

2010 marks the tenth anniversary of the Smart in the United Kingdom, and to celebrate, the marque hosted 'Smartfest' at Mercedes-Benz World in the South of England. Over 1,400 examples turned up, with the popular ForTwo being joined by discontinued models such as the Roadster and ForFour.

In the grounds of Mercedes' impressive showroom, museum and test track facility, hundreds of Smarts lined up in the sunshine for the thousands of visitors to enjoy. From standard examples through modified cars and vinyl-wrapped models to rally cars and off-road conversions, the festival had something for everyone.

Just driving into the show was a surreal experience - with Smarts outnumbering regular cars at least twenty to one, the traffic jam was like no other. Colorful certainly, but probably the happiest jam you'd experience too. The beeping horns certainly weren't in weren't in anger and frustration, with hundreds joining in to signal their arrival.

Once inside the show, we joined the hundreds of other Smarts lined up beside the test track, the parking lot being as much a part of the show as the stalls and events.

Cars for judging rightly stole the show though. Most of the attention went to the stripped-down Crossblade model, lacking such standard features as a roof, windscreen and doors, that had been accessorized with Ferrari logos and a bright red paint job. It went on to win a "best of show" award, as did the car equipped with a Smart-sized tea cosy, which won "best dressed".

Focus wasn't just on the show though. Mercedes-Benz were hosting the final round of the Mercedes-Benz Driving Academy, there to teach younger drivers all aspects of driving, from motoring skills to journey planning and changing tires. The star of the show? A guest appearance by Formula 1 racing driver and 2008 World Champion Lewis Hamilton, who entertained the Smart crowds with some drifting in a V8-powered AMG Mercedes.

Also drifting to entertain the crowds were a Smart display team, running nose-to-tail in some slightly battered ForTwos and pulling stunts in the diminutive cars.

Visitors couldn't fail to notice Mercedes' impressive museum and showroom though, and Smart fans could get close and personal with old concepts as far back as 1993 when the Smart was just a glint in Nicolas Hayek's eye. Even from this early stage, the Smart DNA is clear to see. Other concepts included the 1996 motor show vehicles and 2009's Smart Crosstown, a chunky-looking gas-electric hybrid that was never brought further than the concept stage.

What we noticed was the enthusiasm towards Smarts. Although there are Smart clubs in the U.S, none have the scale of the U.K.-based thesmartclub. According to the club, almost 70 percent of U.K. Smart owners are part of the club and they had a huge presence at the show, despite not organising it for the first time since 2000.

For a company producing such small cars, Smart has made a big impact on the U.K. and Europe. Undoubtably the small, economical city cars make more sense in the crowded streets of London, Paris and Rome and whilst not to every taste, thousands of buyers have taken the car to their hearts.

Indeed, the 'Smart car' seems to share a similar following to other iconic European cars such as the Mini, Volkswagen Beetle and Fiat 500. Whilst those cars have enjoyed a retro renaissance in the past decade, Smart has started from scratch to produce a modern interpretation, a car based on the small car concept rather than past glory.

Whilst not without its faults, the ForTwo has many virtues and we sincerely hope the model has a future in the U.S. Even the Mini was a slow burner back in the day, but nowadays has a cult following like few other cars. Perhaps in a few years, enthusiasts will mention Smart in the same breath.