The annual event known as "SEMA" (for Specialty Equipment Manufacturers Assocation) has grown from its simple trade show origins into a global extravaganza bigger than most auto shows.

Imagine the hugest Kustom Kar event you can possibly conjure. On steroids. In Vegas.

SEMA is now a mandatory stop for every large automaker. This year Toyota brought several show cars, including a pair of Prius customs. They even threw in a little Latin naming, for spice.

Aerius for display, Aemulus for driving

The first of the pair, the Prius Aerius (Latin for "belonging to the air"), is for display only. Customizer Five Axis Design collaborated with suppliers on design and performance changes to the car that embody environmental sustainability, without changing its Hybrid Synergy Drive system.

The second is the Prius Aemulus (meaning "envious imitation"), which is a drivable replica of the Aerius. Toyota has donated it to the Environmental Media Association to be auctioned for charity.

Starting with a 2010 Toyota Prius, Five Axis Design created a set of aerodynamic add-ons from polyurethane and partially recycled materials. Computer modeling ensured that the 2010 Prius maintains its 0.25 drag coefficient even after it is modified. 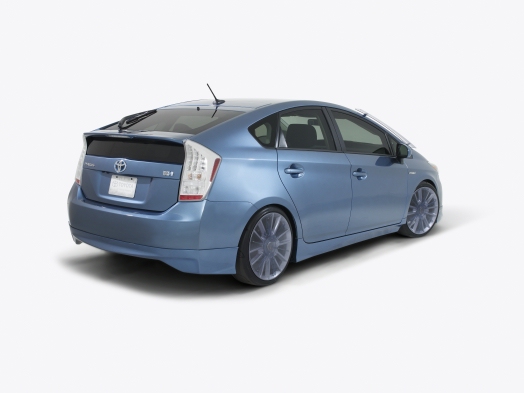 Both versions were painted in a custom three-coat blue-green color that "resembles airiness and the color of the sky," executed in waterborne paints.

For laughs, the custom-made Yokohama tires have a leaf pattern built into the treads. Like the original Toyota Prius tires, they are low-rolling-resistance models, and 80 percent of the material that goes into them is from non-petroleum sources.

The windows of both cars are covered in a 3M film that blocks 99.9 percent of ultraviolet light, giving a Solar Protection Factor of 1,000 or more. No need for sunblock there!

The seat fabric is made entirely from recycled polyester, much of it from a special manufacturing process that captures and recycles 99 percent of solvents used for production, minimizing pollution. The original seat materials, replaced by the new fabric, were recycled by Toyota.

Like virtually every SEMA car, the Prius Aerius has a gigantic stereo. The Pioneer system in the Aerius puts out 900 Watts and blasts through 10 separate speakers; the marginally more practical Aemulus makes do with a mere 700-Watt system and only nine speakers.