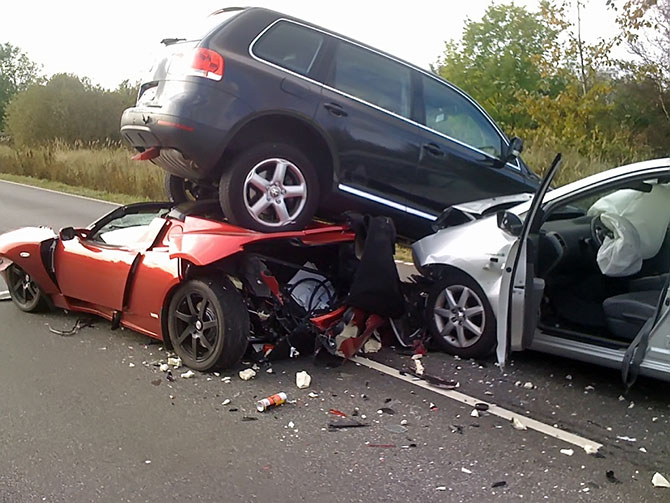 Yesterday, we started seeing reports of an accident that involved a Tesla Roadster (1 of about 700 in the world), a Toyota Prius and a Volkswagen Touareg. Now you may be asking yourself what the big deal is and why this is worth reporting on. Well, I thought the same thing until I saw the picture of the accident. Any time you have something that seems like a common occurrence end with a car on top of another it should give people pause.

In this case, the final word is that a Tesla roadster was rear ended by a Toyota Prius, which in turn shoved the Tesla under the VW Touareg that was in front of it at the time. Safety is always concern and in this case there are no reports of major injuries, but that probably wasn’t as comforting to the Tesla driver who experienced the impact. This really should be filed under: Truth is Stranger Than Fiction. Some of these situations you just can’t plan for in life, but it does make you reevaluate driving a small car amongst a culture of SUV drivers like we have here in the States.

Since this happened in Denmark we don’t have a lot of news on why the accident happened or the road conditions, but what we can see is that the result is a big mess. The bottom line in this story is that the Tesla seems to have held up well to the two front assault and it is a testament to how safe the car is; I mean how many sports cars would you be willing to bet would hold a 5000 lbs Touareg on their roof?

Until next time be sure to browse around the site for other interesting stories like:

How Many Non-Hybrids Do You Think Make the Ten Most Fuel Efficient Cars for ’10?