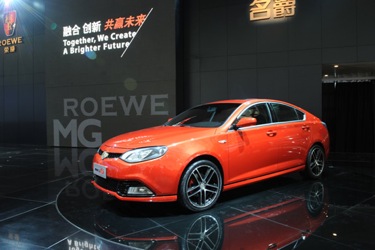 Most of us here in the U.S. haven’t seen a new production MG stateside since the 1980 MGB LE. However, we have watched from a distance as Morris Garage has changed hands from British owned to the BMW years that produced the MGF and MGTF to present day where this long time British favorite is now owned by the Shanghai Automotive Industry Corporation (SAIC) based in China. Back in April, SAIC revealed the MG division’s newest MG concept—the MG6.

The MG6 concept is based on the Roewe 550 four-door sedan, which is said to use a modified version of the Rover 75’s front wheel drive platform from some years back. Of course this means the MG6 is set to come equipped with the K-series like 1.8-liter 4-cylinder gasoline engine. The twist—the MG6 will be available with a 160 hp turbocharged 1.8-liter for those looking for a little more punch than 130 hp that will come with the base motor. All of this is wrapped in a Ford Mondeo-esque like body and is slated to arrive as a production car in the Chinese market for 2010.

Will the MG ever make it back to the U.S. though? Currently, there aren’t any confirmed plans for that, however, the Chinese have been looking for ways to break into the U.S. market. I look at this as a repeat of Nissan and Toyota coming to North America. Older generations will remember Toyota’s first venture into the American market in 1957 with the Toyopet Crown (see First Toyota in the States). It was a disaster, especially from a public relations perspective and it caused Toyota to pull out of the in 1960. Of course we all know how that story has continued; some 50 years later Toyota is now the number one car manufacturer in the World.

So for all you MG fans, don’t count the marque or SAIC out of the equation. It might take another couple years, but I doubt that would change people’s love affair with the classic British Sports car. It did spawn the Mazda MX-5 Miata revolution.

In the hunt for more small car news? Then check out our archives for February, March and April!