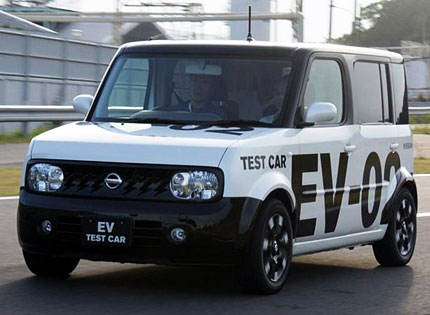 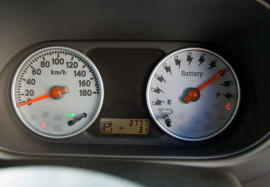 Nissan invited several journalists and other automotive types to conduct a brief test drive of their upcoming electric vehicle.  The prototype, still in early prototype form known as a mule, carries the internals of their electric model planned to come to market in 2010, but the body of the existing Nissan Cube.

The test car, dubbed the EV-02 is pictured above, but the production vehicle will likely be a compact sedan more in line with the looks and size of the Versa or Sentra rather than the boxy Cube pictured above.  The Nissan EV is slated for production in 2010 and will be released first in Seattle and then in 12 to 15 additional markets in the U.S.

With background complete, lets move on to updates about the car itself.  The Nissan EV will employ a laminated lithium ion battery system that is half the size and half the weight of a traditional lithium ion system.  The battery was developed through Nissan's partnership with NEC.  The vehicle can be recharged through a standard 220 volt outlet in as little as 4 hours and is expected to have a range of 100 miles between charges.  Charging from a 110 volt outlet is possible, but will take up to 14 hours to complete the task.

One option that Nissan decided to include is a 480 volt rapid charging system.  The 480 volt system can recharge the batteries to 80% of their capacity in 26 minutes.  Nissan expects that roadside charging systems will use this expensive, but convenient charging option.

Driving experience:  The Nissan EV moves out with hardly a sound at all.  The drivetrain  and power-train combine for nearly silent operation.  Torque comes on quick and makes the vehicle feel peppy.  The brief drive time was limited to a closed course and no public roads.  According to journalists on hand, Nissan tuned this prototype for economy rather than performance in mind.  Accordingly, tires were not smoking, but they were still impressed by the vehicles acceleration and linear power band.

The Nissan EV is expected to come to market in less than 18 months.  Nissan is focusing on building a vehicle that is environmentally friendly and to that end, the Nissan EV will be 99% recyclable including the battery system.

According to Mark Perry, Nissan's director of product planning for North America, the Nissan Ev will not be priced above comparable gasoline vehicles in the same class as the Nissan EV.  He believes the vehicle will come to market in the $20,000 to $30,000 price range.  The vehicle is expected to seat 5 passenger and be available with a wide range of options such as GPS, premium audio, heated seat.

Considering the price tag, which would put it into the upper range for a compact car, the EV may be a hard sale.  But the EV would be eligible for $7,500 in incentives from the federal government.  The EV also has an operating cost of only 4 cents per mile which adds to the savings for would be buyers.

One small side note.  In order to maximize the vehicle's range, the Nissan EV will be tailored to where it is sold.  In hot climates, the air conditioning system will receive a boost at the cost of a lower powered heating system.  In cold climate the focus will be on a boosted heating system.  This setup should maximize range, but its unknown if consumers will appreciate this type of system.

Nissan is optimistic and hopes that the EV will outgun hybrids in coming years.  They are actively involved in creating the charging infrastructure needed and feel that the future of automobiles will lie in the success of the electric vehicle.