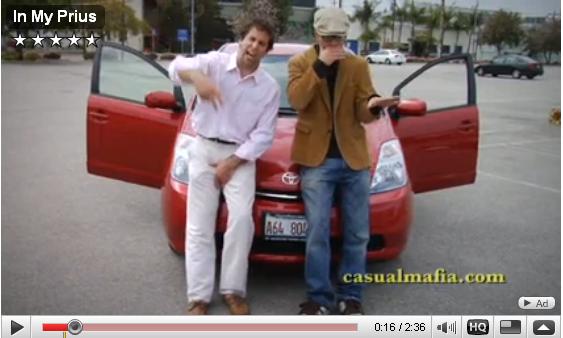 In My Prius video by The Casual Mafia

You have to admit, we Toyota Prius fans can get awfully serious about our cars.  Hey, it's hard work, saving the automotive world one egg-shaped hybrid at a time, right?

So to launch you into the weekend, we figured we'd bring you a couple of videos we can only categorize as "people doing stupid things around Priuses".

First up is movie star, pop singer, and personality Miley Cyrus. Like many of Hollywood's glitterati, she drives a Toyota Prius at least some of the time (we haven't looked in her garage lately, so we don't know if a Paris-Hilton-style Bentley Continental GT lurks in there).

We're not sure we could identify a Miley Cyrus song to save our life, though her dad's one big hit, "Achy Breaky Heart," is indelibly etched on our neurons (and we'd love for it to go away). But we suspect Ms. Cyrus could use some lessons in both deportment and driving.

We're fairly clear that fit young women shouldn't park their black Priuses in the handicapped spots, whether at LA's Millions of Milkshakes takeout or anywhere else, unless they're actively handicapped. That means physically handicapped, m'dear.

We also think drivers are supposed to know that being able to reverse your car out of a parking space is not a cause for extra brownie points. It's a mandatory part of possessing a driver's license. Sigh.

And now we get to The Casual Mafia, an "LA-based entertainment company" that has produced a rap video called "In My Prius." The maroon Toyota Prius shown is a 2004, according to the lyrics. Unless they just used that to rhyme, of course.

A multicultural geekfest of a cast ticks off talking points from Toyota's press material: MPGs, silent operation, 15-inch wheels, interior room, and so forth. Points for saving the ozone layer, et cetera.

The plotline, such as it is? The protagonists lost all their money in the Madoff swindle, had to give up their BMW, and are now turning to their Prius, complete with Obama bumper sticker.

Just to send you into the weekend with your neurons resonating the way ours are: a bonus video of Billy Ray Cyrus performing "Achy Breaky Heart" on BBC's Top of the Pops in 1992.