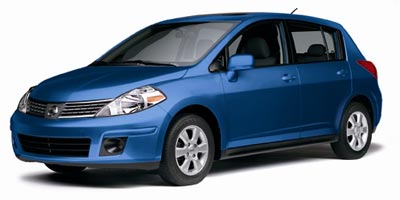 Would it surprise you that the least expensive car for sale in the U.S. isn't a Hyundai, not a Suzuki nor a Kia?

To woo new-car buyers away from cheaper used cars during this deep recession, Nissan's priced the Versa 1.6 from $9,990 MSRP. It's a bare-bones model, for sure: you get four wheels, four doors, a heater, six airbags, tire pressure monitoring system and not much else. In other words, this is a true BASE model.

The one of the major differences between the 1.6 and the 1.8 is that the 1.6 carries a smaller 1.6-liter four-cylinder engine that puts out about 107 hp (comparable to the Chevrolet Aveo, Kia Rio and other subcompacts). This is opposed to the 1.8 liter four-cylinder that cranks out about 122 hp in better-equipped Versas. The 1.6 does okay in the miles per gallon arena, but disappoints a little by only managing 26 mpg city/34 mpg highway. However, the fuel economy is in line with other subcompact competitors like the Chevy Aveo, Honda Fit, Kia Rio etc…the only one that stands out of this pack by far is the Toyota Yaris, that boasts 29 mpg city and 35 mpg highway.

If you're looking for a true base model, that gets decent gas mileage and is more than affordable, the Versa 1.6 might be for you. However, if you're looking for more of the creature comforts I would suggest you stretch your sights to the Versa 1.8 that tips the scales at a starting price of $13,100 and can be equipped with the power package that adds the power windows, door locks, a better audio system, and more.

You'll find more on the 2009 Versa at AllSmallCars' new-car information pages. For a full review, steer over to TheCarConnection.com for an in-depth look at the Versa and other competitive wheels.