The Ram Revolution BEV Concept, previewing a future electric Ram pickup truck, is due to debut in concept form at CES in Las Vegas in January, rather than originally planned at the LA Auto Show this month.

The announcement on Tuesday from the Stellantis truck brand confirmed timing for the Ram 1500 Revolution Battery Electric Vehicle Concept, and piled on a few more boast points that appear to be direct lobs over the Ford F-150 Lightning and upcoming Chevrolet Silverado EV.

The Ram electric truck will be a “a visionary roadmap and glimpse into the future,” showing how the brand will “redefine the segment,” said the company. It added that its electric vehicles, including the Ram 1500 electric truck, “will push past the competition as leaders in a combination of areas truck customers care about most: range, towing, payload and charge time.”

To compare on range for the like-sized electric trucks expected on the road by then, the F-150 Lightning currently offers up to 320 miles of EPA range. GM says the Chevy Silverado will offer up to 400 miles, and Tesla says that a version of the Cybertruck will offer more than 500 miles of range.

Over months, Ram has teased obscured glimpses of the fully electric Ram 1500, suggesting that it has a sleeker, more daring design than the gasoline Ram 1500—perhaps with a midgate setup as is used in the upcoming Chevy Silverado EV (and previous Chevrolet Avalanche). Earlier this year it opened dialog with devoted Ram truck brand fans to provide input as the electric trucks are being developed. 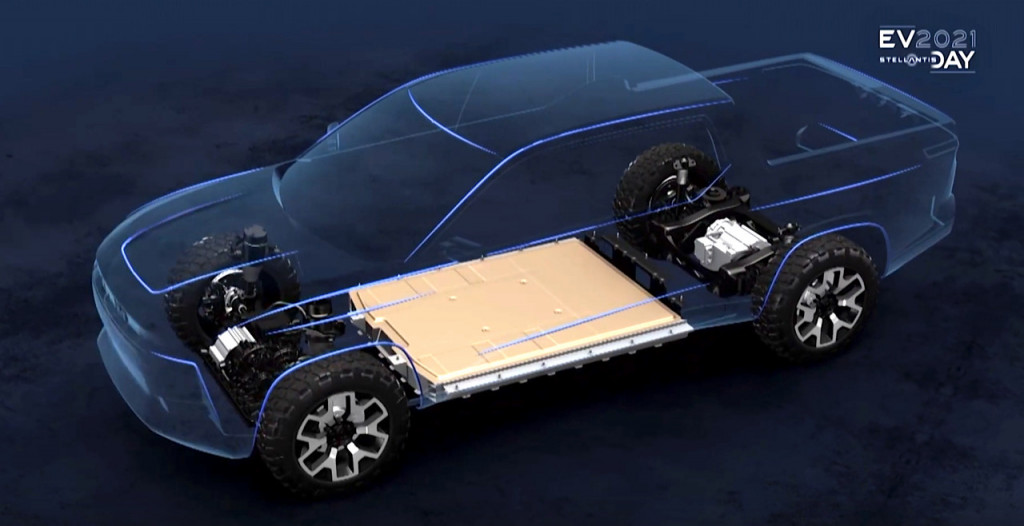 It will be built on one of the platforms that’s being developed as part of a $35 billion Stellantis EV push. In its STLA Frame layout, full-length frame rails enclose a flat battery pack—in this case, filled with made-in-America battery cells.

The Ram 1500 EV is due for deliveries starting in 2024. That might not be too long after Tesla finally gets to ramping up Cybertruck production.