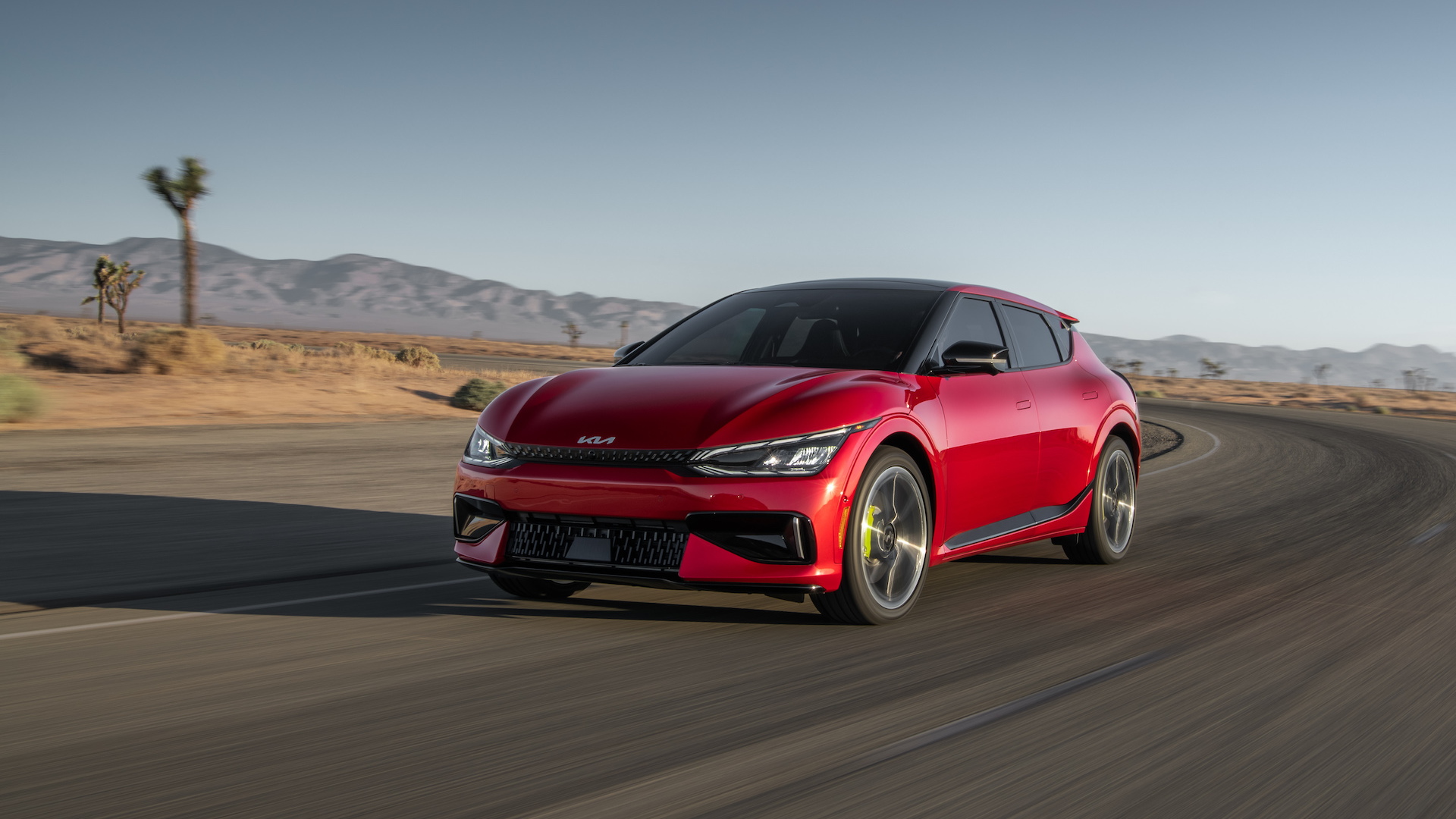 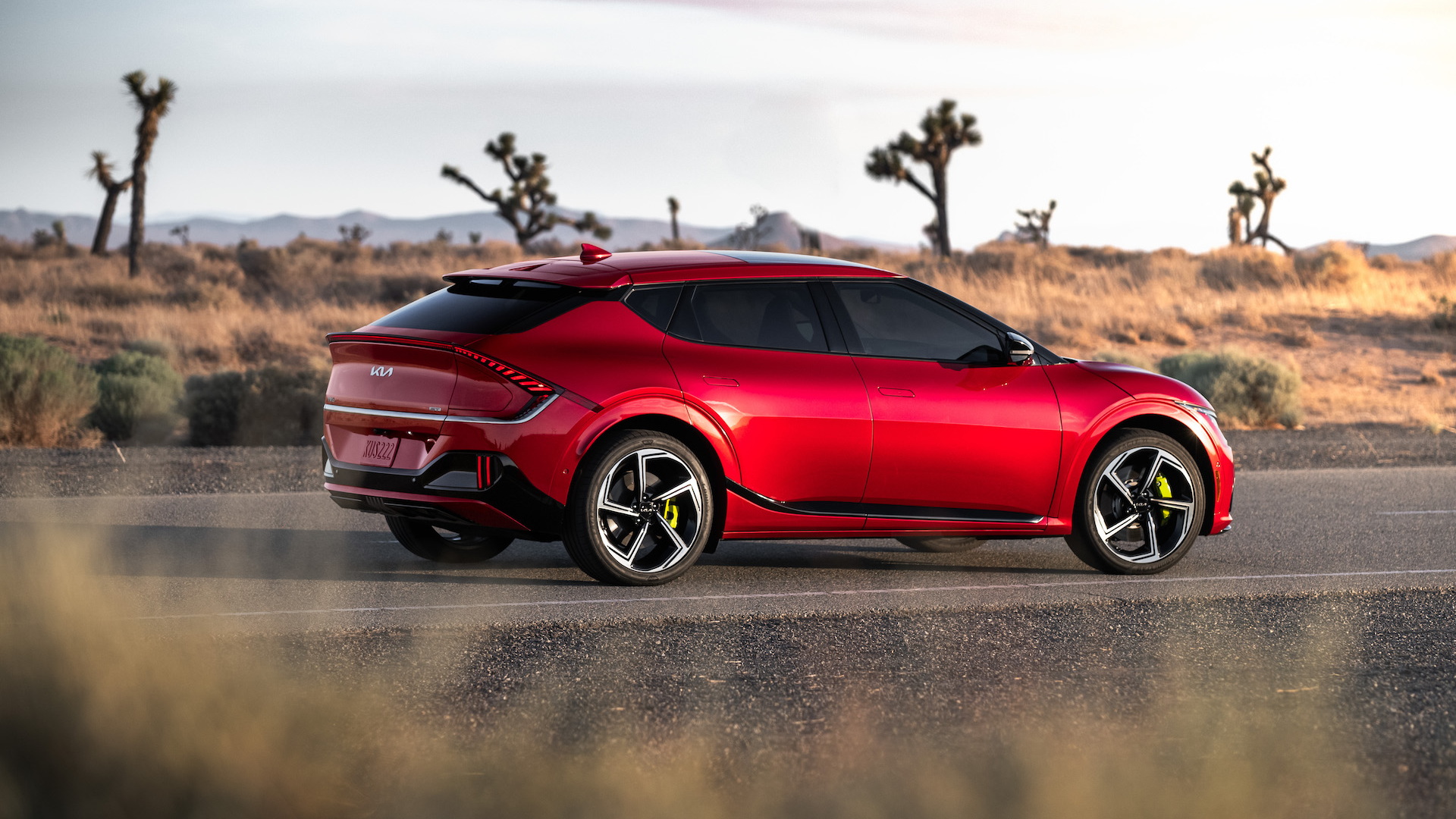 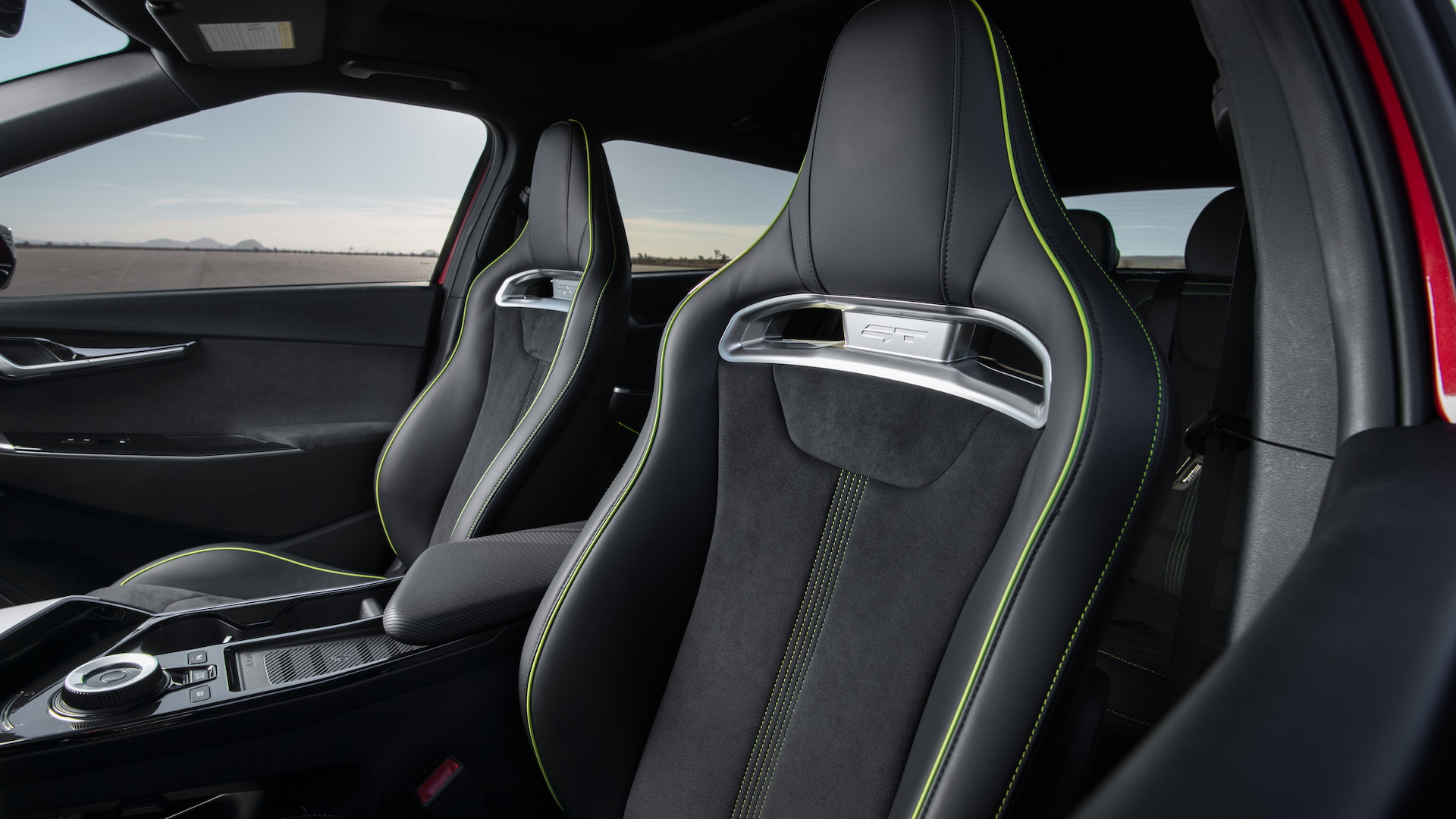 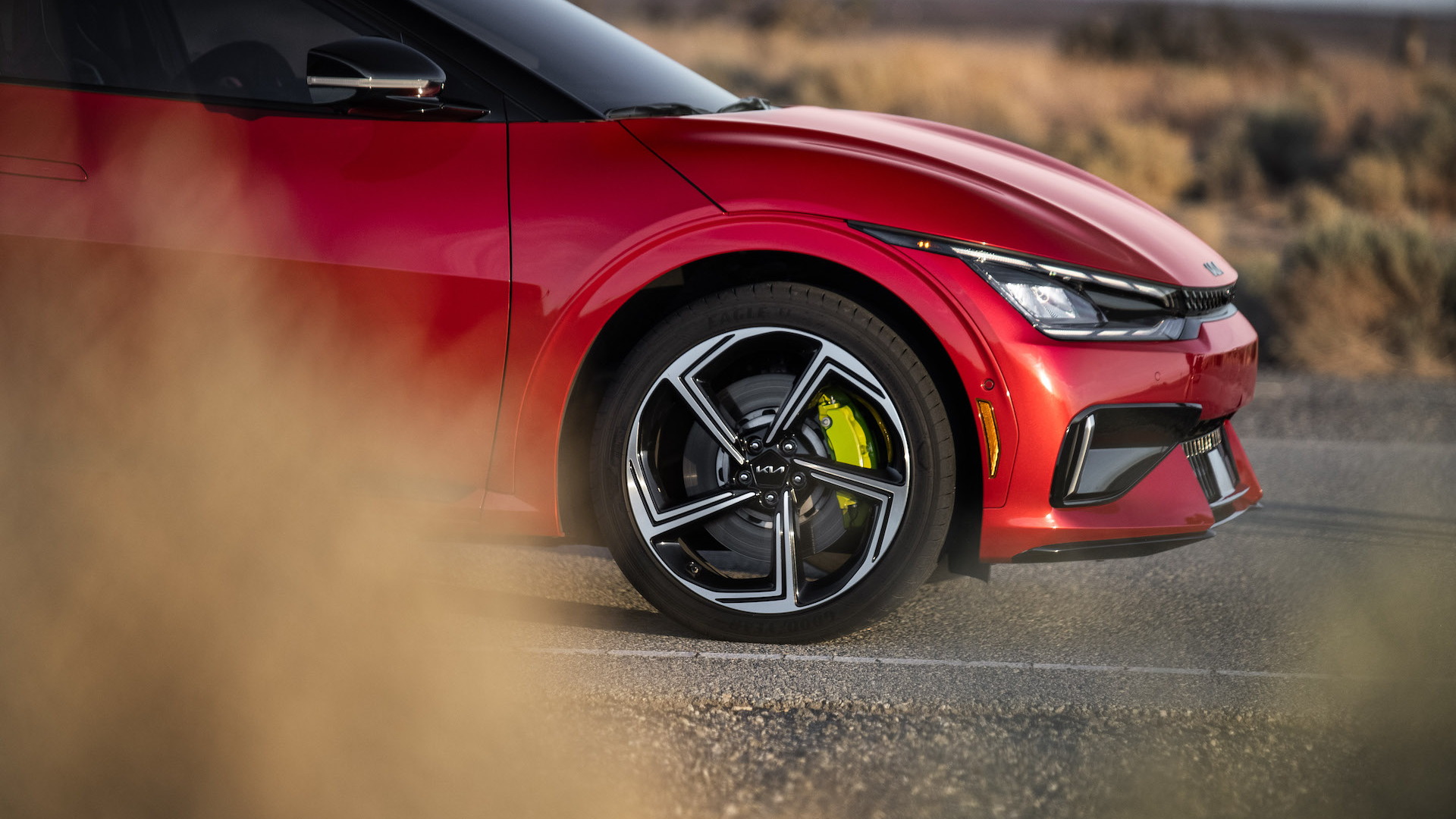 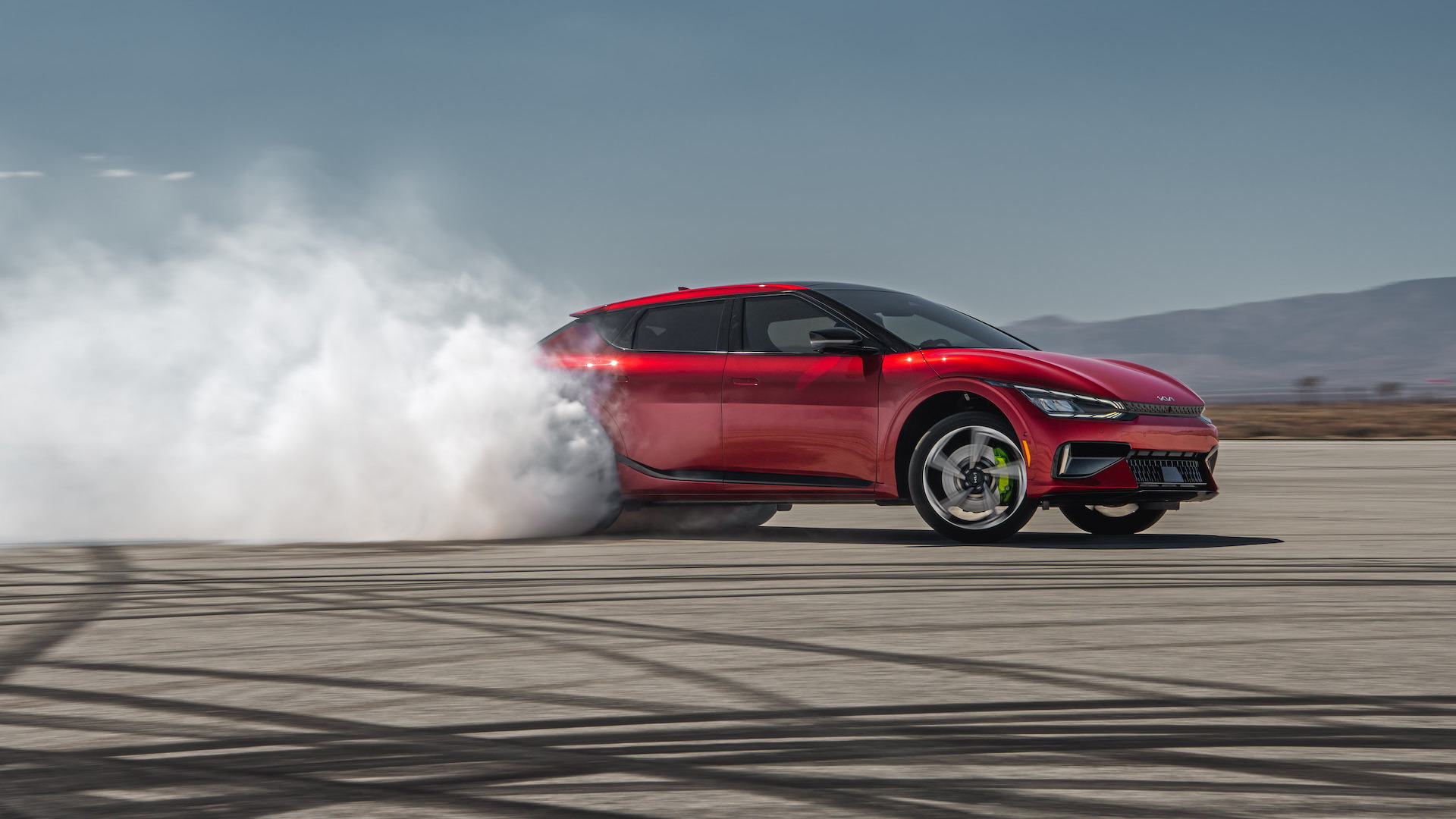 Kia has announced U.S. details for its upcoming performance version of the EV6, called the EV6 GT, although range, efficiency, and pricing remain yet to be confirmed.

The model has been the expected range-topper from the start—hitting a higher performance peg than any version of the Hyundai Ioniq 5 as of yet. Kia already laid out the essentials for the quickest EV6 model last year: 576 hp from a higher-output propulsion system, cutting the 0-60 mph time to less than 3.5 seconds, with dynamic prowess aided by a GT-Mode performance configuration and electronic limited-slip differential, plus various other upgrades. Then, in June, the car made a dynamic debut at the UK’s Goodwood Festival of Speed.

In U.S.-spec form, those official performance numbers are 0-60 mph in 3.4 seconds with a top speed of 161 mph—good enough, Kia says, to out-accelerate the Ferrari Roma and Lamborghini Huracan Evo Spyder RWD. It’s also better than the Tesla Model Y Performance’s 3.5 seconds to 60 and 155-mph top speed.

The GT pairs a 160-kw front motor and a  270-kw rear motor, for a combined output of 430 kw—that 576 hp—with a combined torque of 546 lb-ft. Upgrades for the GT include a dedicated sport suspension with dynamic damping control. The electronic limited-slip rear differential helps direct torque to the wheels with more grip, while larger ventilated front and rear disc brakes and Z-rated Goodyear Eagle F1 tires give this model what it needs to deal with the extra power.

On the outside, the GT gets a rear aero spoiler, 21-inch alloy wheels with “neon-accented brake calipers, and unique lower front and rear styling that emphasizes the width. Inside, the GT gets suede-trimmed performance front bucket seats with green piping, with ambient lighting and its own striped motif.

In addition to the Eco, Normal, Sport, and Snow drive modes you’ll find throughout the EV6 lineup, the GT adds a GT Drive Mode that optimizes the behavior of the motors, brakes, steering, suspension, electronic limited-slip differential, and stability systems to maximize performance. There’s also a My Drive Mode setting for the driver to pick and choose, and a Drift Mode that brings more power to the rear wheels. Kia has also added two additional sounds to the menu, although here it’s for those inside the cabin, not outside.

On the charging front, it appears that the EV6 GT is unchanged compared to other EV6 models with the larger battery pack. With its 800-volt fast-charging capabilities and 350-kw DC fast-charging hardware, the EV6 GT can recover an 80% charge in less than 18 minutes.

All of this is not to be confused with the dual-motor EV6 GT-Line, which we’ve already found a hoot to drive. That one can accelerate to 60 mph in 4.6 seconds, while even single-motor rear-wheel-drive models do the dash in less than seven seconds.

Kia says that the EV6 GT will be available at U.S. dealerships starting in the fourth quarter of the year. It’s estimating a 206-mile range for the GT, according to those present at an on-site reveal in Monterey, California. Although yet to be confirmed by the EPA, that would be significantly below the 274 miles of the dual-motor EV6 with the same battery pack.

In the slow release of info, Kia still hasn’t said what the EV6 GT will cost in the U.S., so expect that—and an build tool and more for this sporty version—very soon.