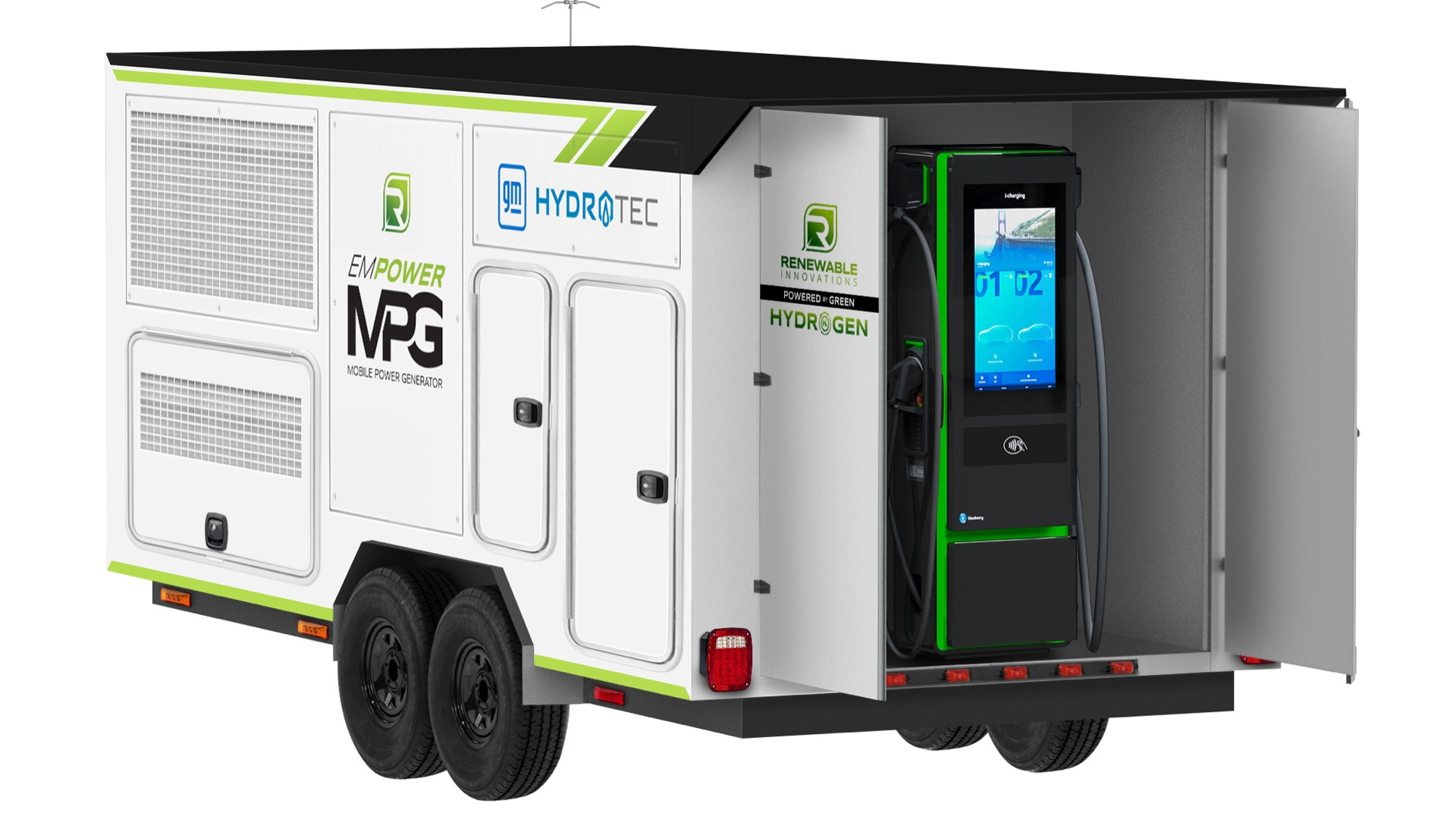 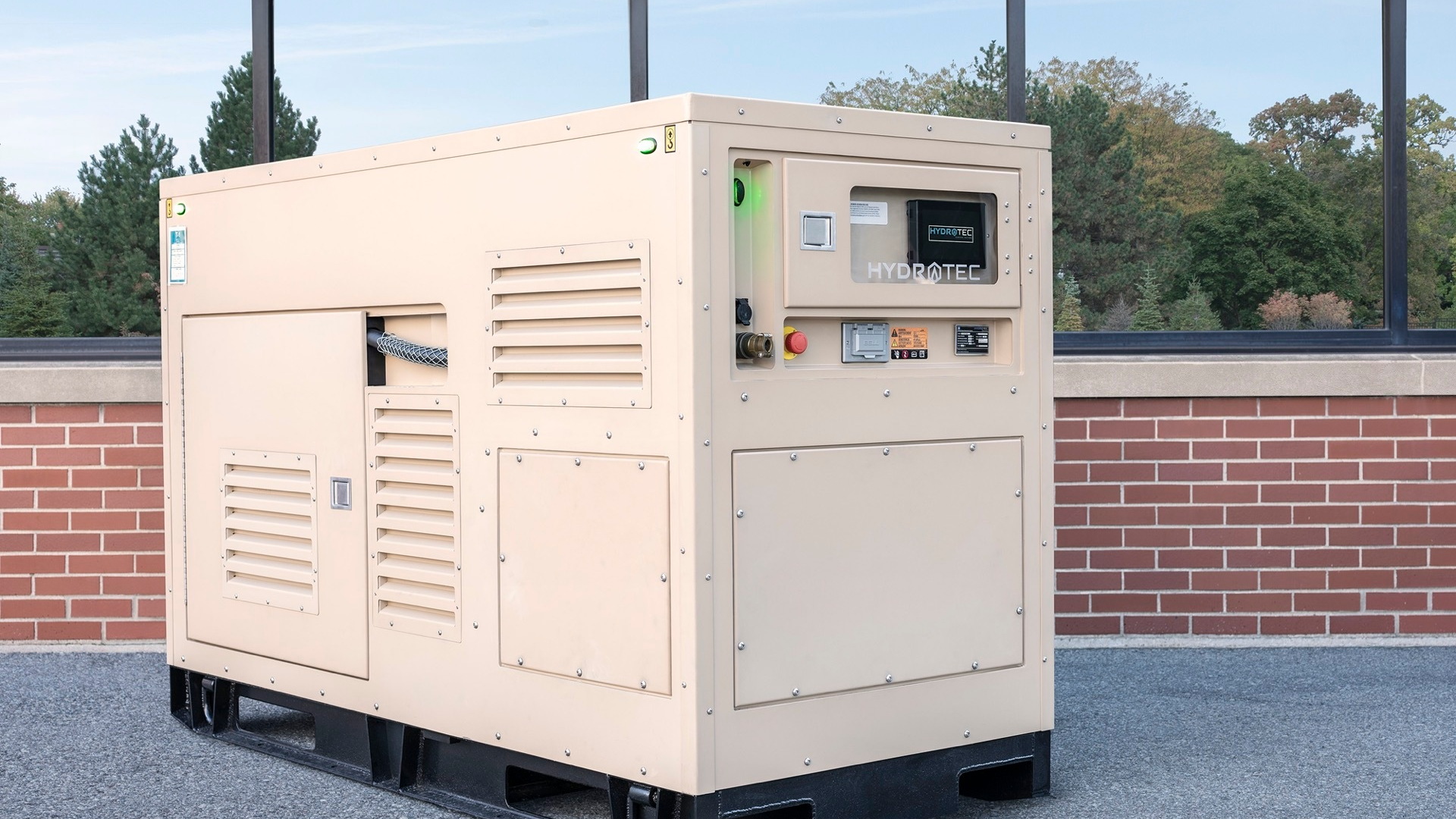 On Wednesday, GM announced it’s adding a line of Hydrotec power generators to the plan—as well as a DC fast charger that will use fuel-cell power to provide charging at places where the grid might not allow it.

These mobile generators could potentially be used by worksites, data centers, or outdoor festivals, and they’re all powered by GM’s Generation 2 Hydrotec fuel-cell “power cubes,” the company said. They’ll be offered in a wide range of outputs from 60 kw to 600 kw, to fit various uses.

The push into the generator business includes the Mobile Power Generator (MPG) revealed Wednesday. To be made by Utah-based Renewable Innovations, with the Hydrotec power cubes, it will be demonstrated by mid-2022.

The California Energy Commission is funding the use of four MPGs to show how such systems might help offset power loss during wildfire mitigation.

While a battery pack is about 93% efficient, the efficiency of fuel cells is the upper 60% range. However with longer or bigger demand situations, hydrogen can make more sense, Freese said. GM sees these fuel-cell modules, in some respects, occupying the space that diesel engines did in the past—providing power for the heaviest of applications, while batteries do the rest.

“When you need to put much more energy into the storage form, you get to a point where it’s no longer economical with the batteries, and that’s where the hydrogen comes in,” Freese explained to Green Car Reports. “So there will be a need for both.”

“Grid buffering is more than just the 24-hour cycle...it’s even more than what we talk about with wind, which might flow for a week and then not flow for two weeks,” he argued, noting that if the sources on the grid follow a seasonal nature and loads change quite a bit, it makes sense.

“So to truly optimize renewables on the grid, and have everything running at peak efficiency and maximizing that investment, you have to have a place where you can buffer the energy for months." Hydrogen solves that problem if demand is high and the grid is overloaded in a particular week or even month.

As more renewables come online and pass the 20% mark, about where it can become more problematic for a localized grid, a solution such as this could fit in, Freese summed—with the added potential to take excess energy off the grid as a mobile fuel.

Funding for the MPG itself comes in part from the Michigan Economic Development Corporation and the U.S. Army—partly, because fuel cells have such a low heat signature that they make sense in many military situations versus internal combustion engines. A palletized version of the system is being tested for that.

GM and Renewable Innovations have partnered on the DC fast charger, which is initially designed to be a temporary addition at fuel stations, national parks, or other vacation destinations. The companies say they’ll deploy 500 of them by the end of 2025.

Last year, GM and Navistar announced plans to create and support 2,000 long-haul fuel-cell semis “in the near term.” It's also been clear that it doesn't intend to use fuel-cell tech in passenger vehicles.

GM hasn’t yet responded to a request about how it sees this as a future business—or how it compares to GM’s previous generator business. GM also remains allied with Honda for fuel-cell tech, and it seems plausible that as the new business line grows, it might conflict or compete with Honda's longtime leadership in internal combustion generators.

But the emphasis here is that it’s ready to make applications for a wide range of uses.

“We can solve problems across multiple transportation modes if we do this right,” Freese said. “And so that’s an added tailwind that comes along with this as these infrastructure investments start to build out. They’re going to help each other; there’s a lot of synergy there.”