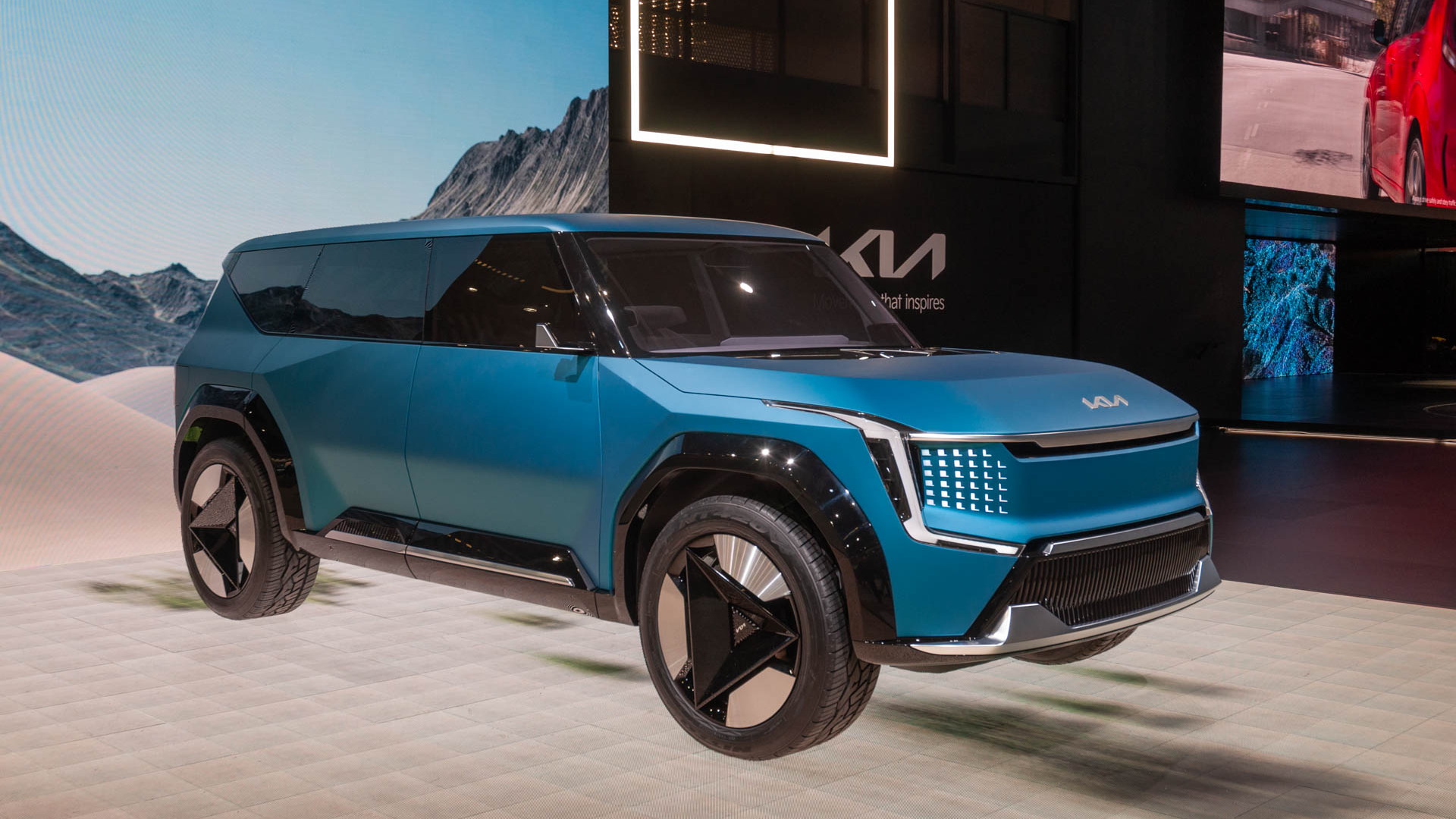 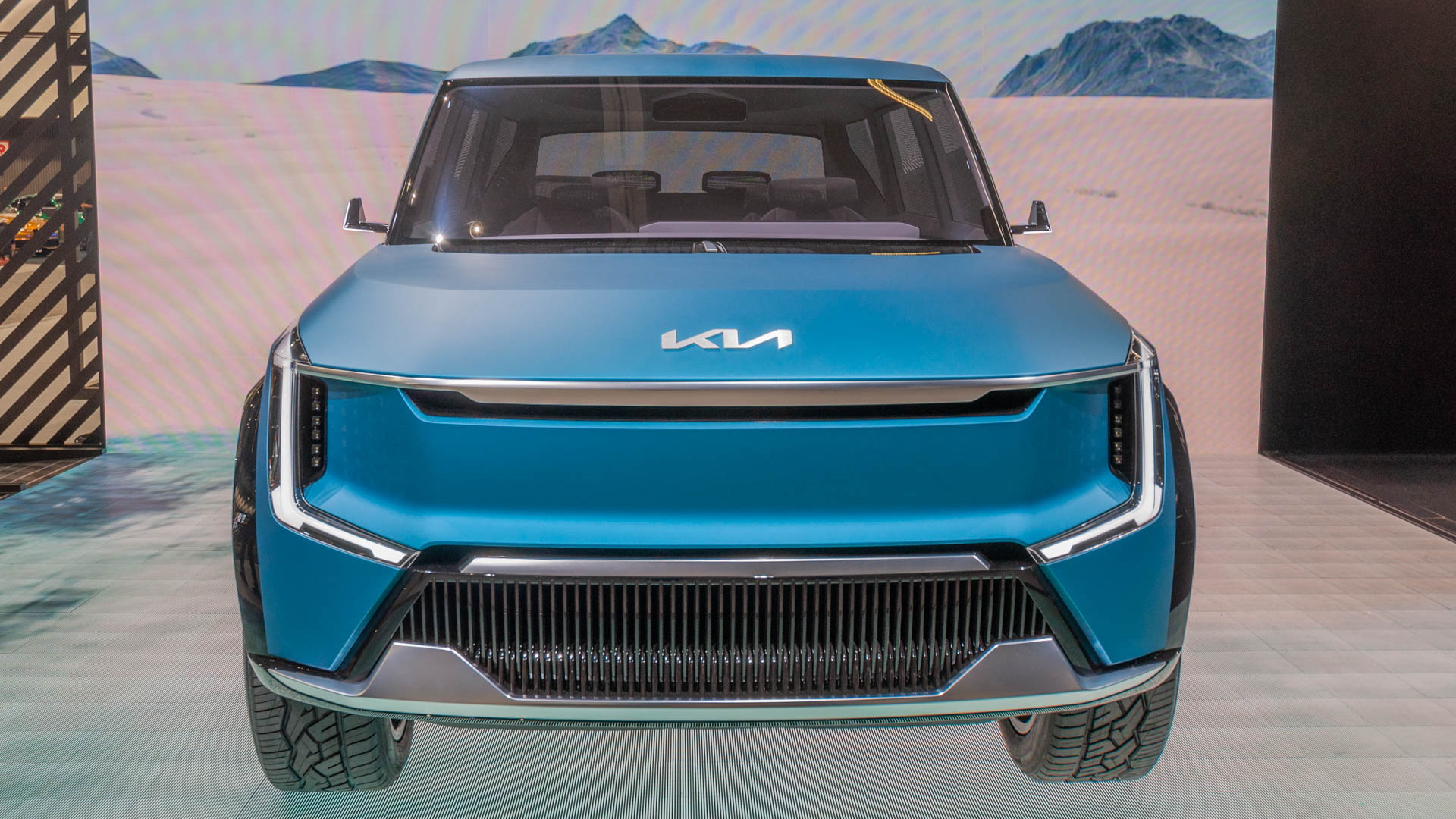 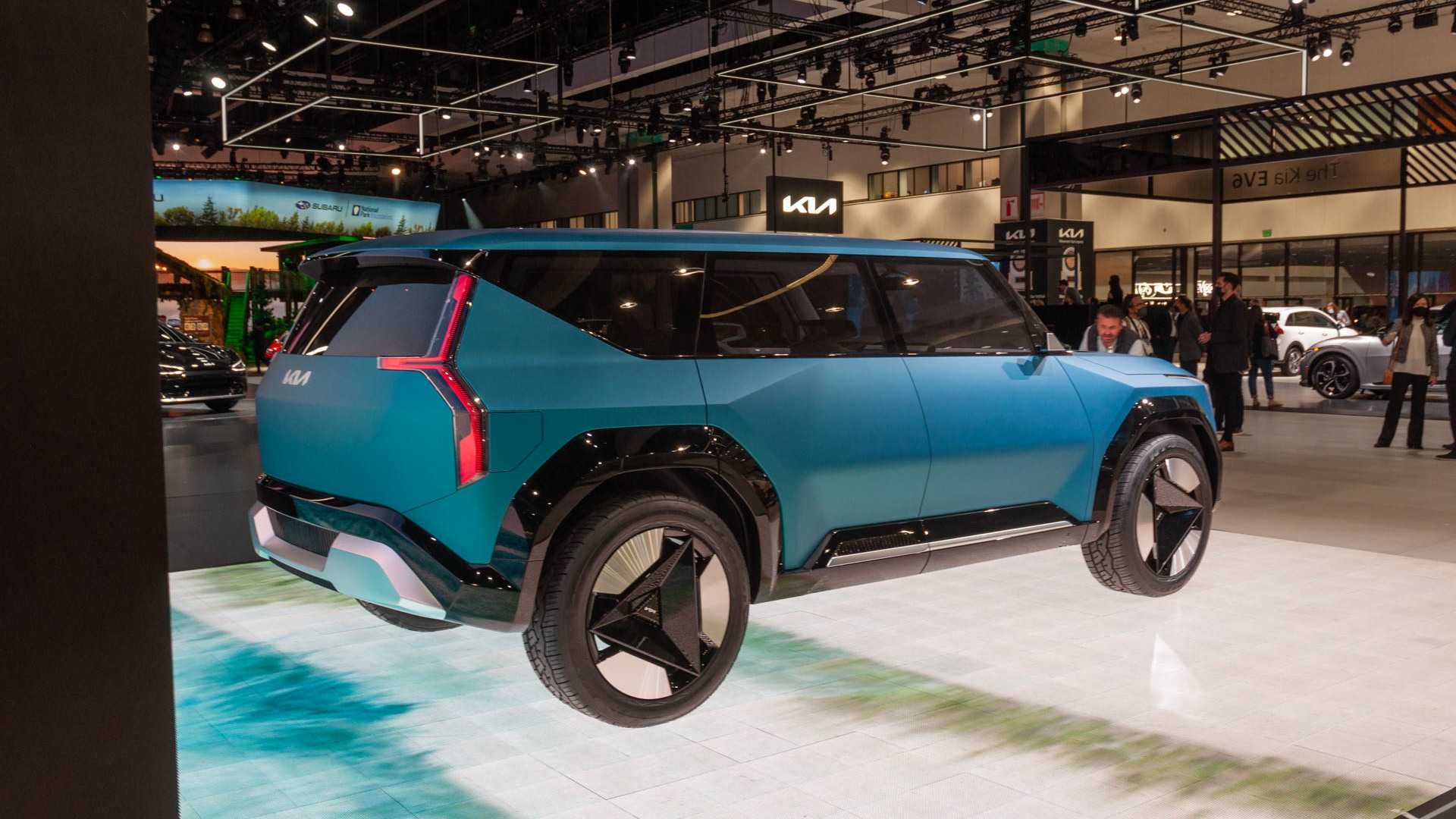 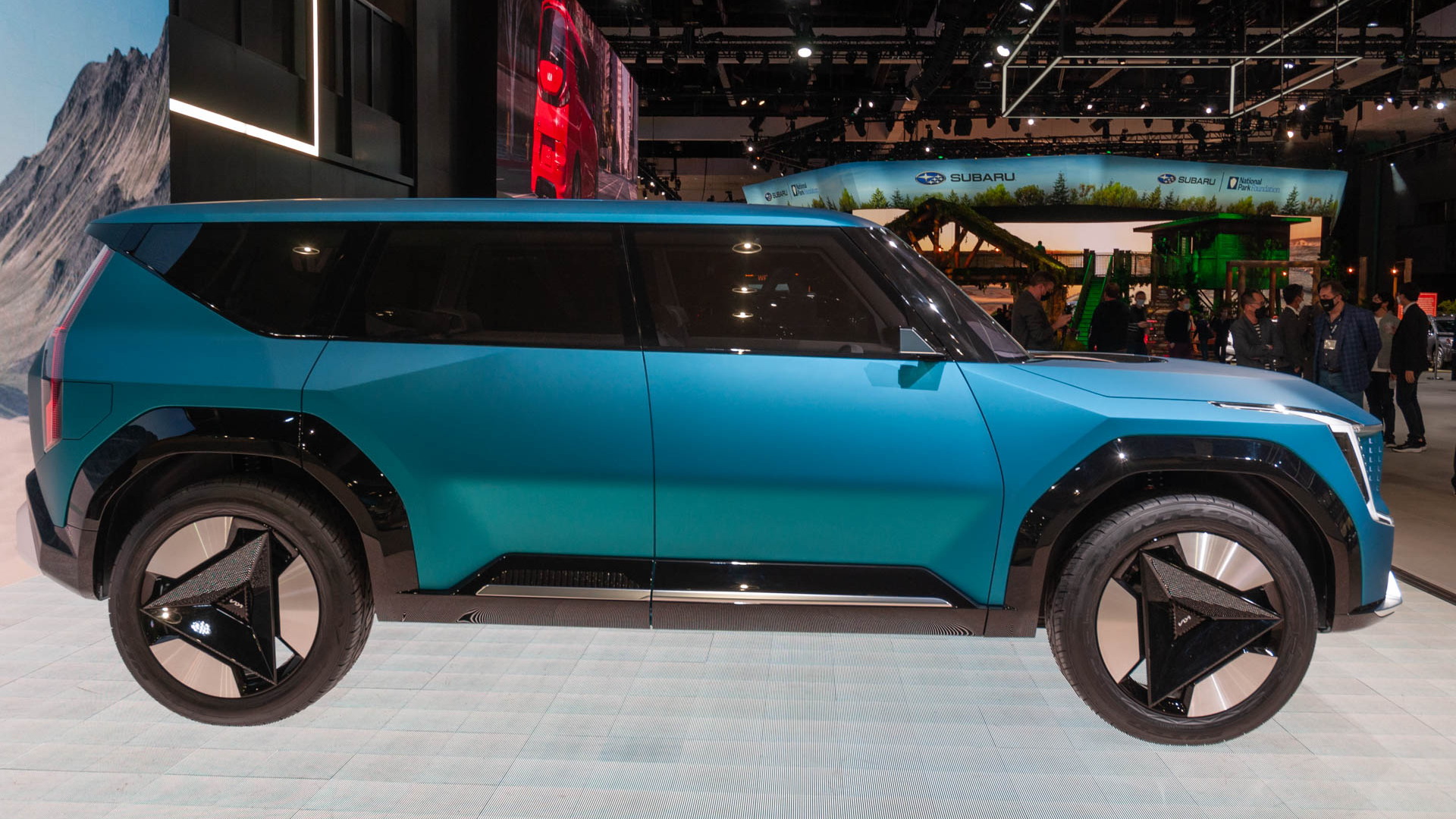 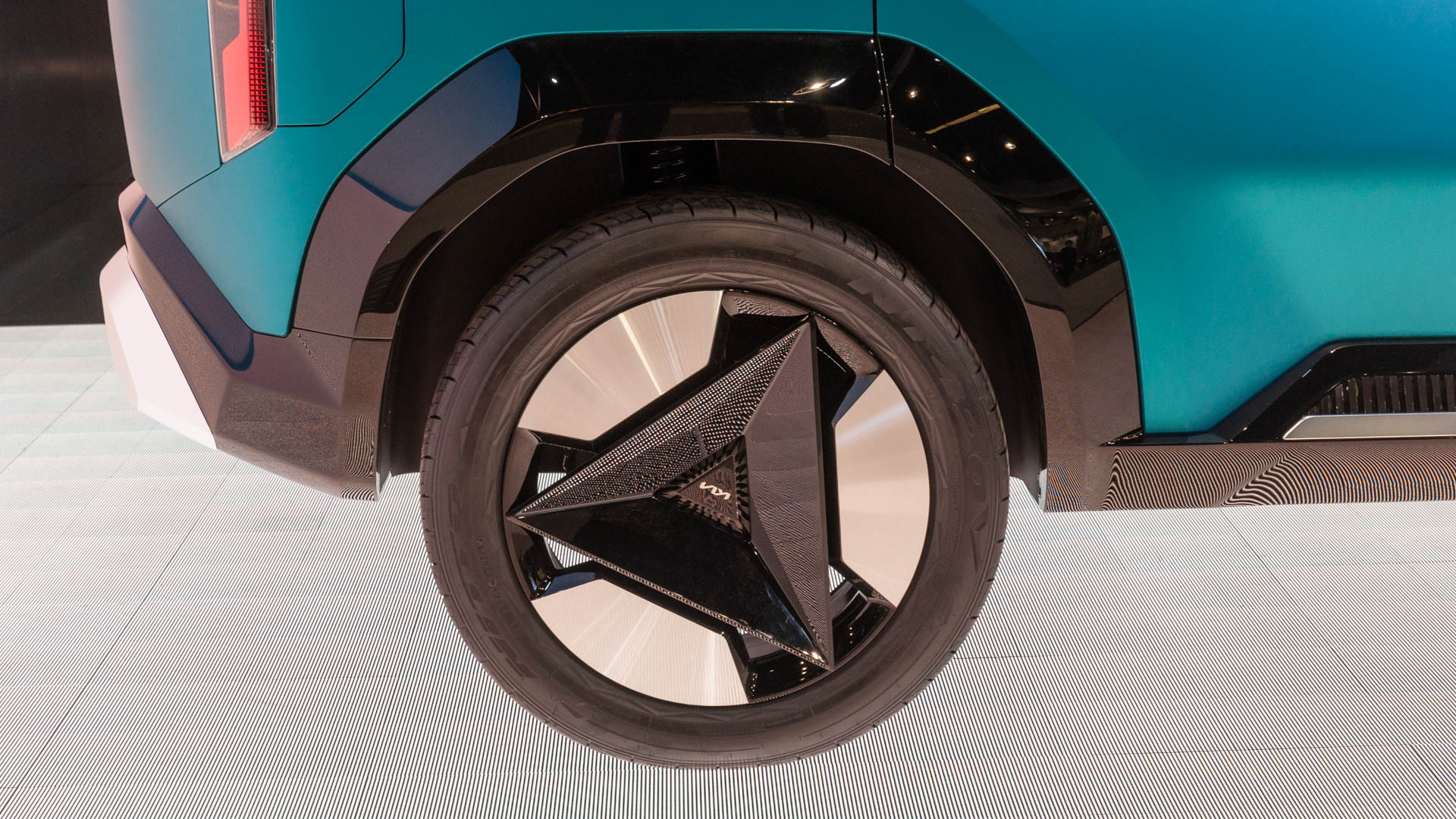 Kia on Wednesday revealed the EV9 Concept, which both hints at an upcoming mid-sized electric SUV and sets a new sustainability-focused design theme for the brand.

The very boxy, upright look of the EV9 reinterprets Kia's Tiger Face facade in front, with a "BEV-focused grille" that hides a star pattern. The hood duct area also houses a solar panel. A star cloud pattern was the inspiration for the lighting, while the exterior color was chosen to mimic the ocean and its depth.

As outlined with Kia's sustainability roadmap last week, sustainable and ecological sound materials are features throughout. The fabric is made of recycled plastic bottles and recycled wool fibers, and there's vegan leather, as Kia plans a shift away from real hides. A steering yoke and large digital display provide plenty of information for the driver, although otherwise the interface looks minimalist.

Inside, a Pause Mode allows light in through a wide panoramic roof, with the seats switching around to face each other, between the first row and third row, while the second-row seats fold down to become a table. Or with Enjoy Mode, the third-row seats turn around to the tailgate, letting users gaze out to nature.

The EV9 nomenclature confirms that this concept previews one of 11 electric cars Kia plans to add to its lineup by 2025, part of a $25 billion funding shift.

The first of those new electric cars will be the Kia EV6, which is arriving at dealerships in the U.S. later this year. This sleeker-looking crossover SUV will be available in all 50 states, Kia previously confirmed. That hasn't always been the case with previous Kia EVs, so the EV6 will likely be the automaker's first truly mass-market EV for the U.S.

The EV6 is related to the Hyundai Ioniq 5, sharing the E-GMP dedicated EV platform, and Kia has said it will launch at least two other electric SUVs alongside the EV6 by 2025. So the Concept EV9 could potentially preview more than one vehicle.

Kia parent Hyundai also showed a larger SUV in concept form at the LA show. The Hyundai Seven concept will preview the Ioniq 7, and has a more rounded roofline than the Kia concept. The production Hyundai Ioniq 7 is expected to launch in 2024.