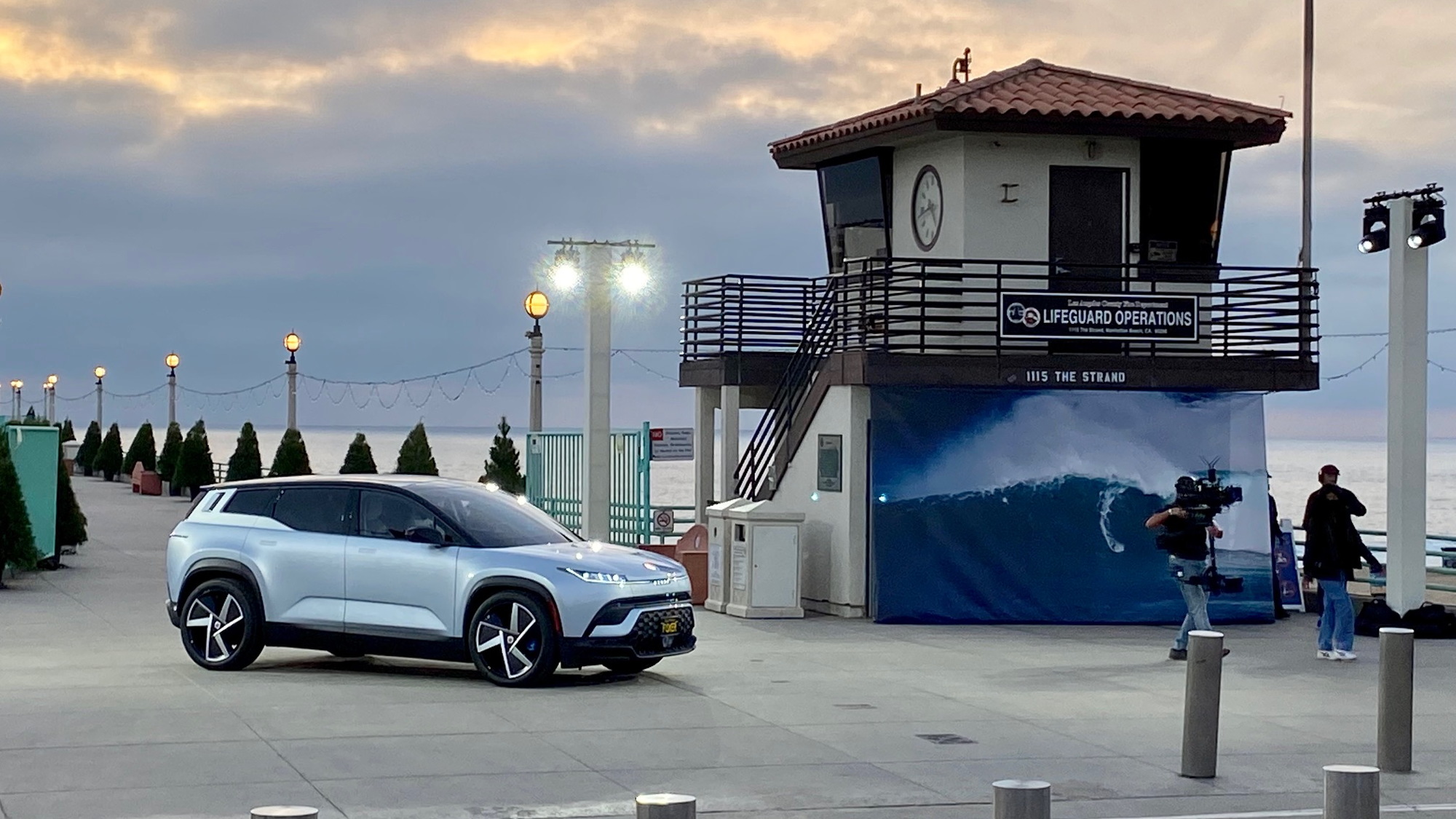 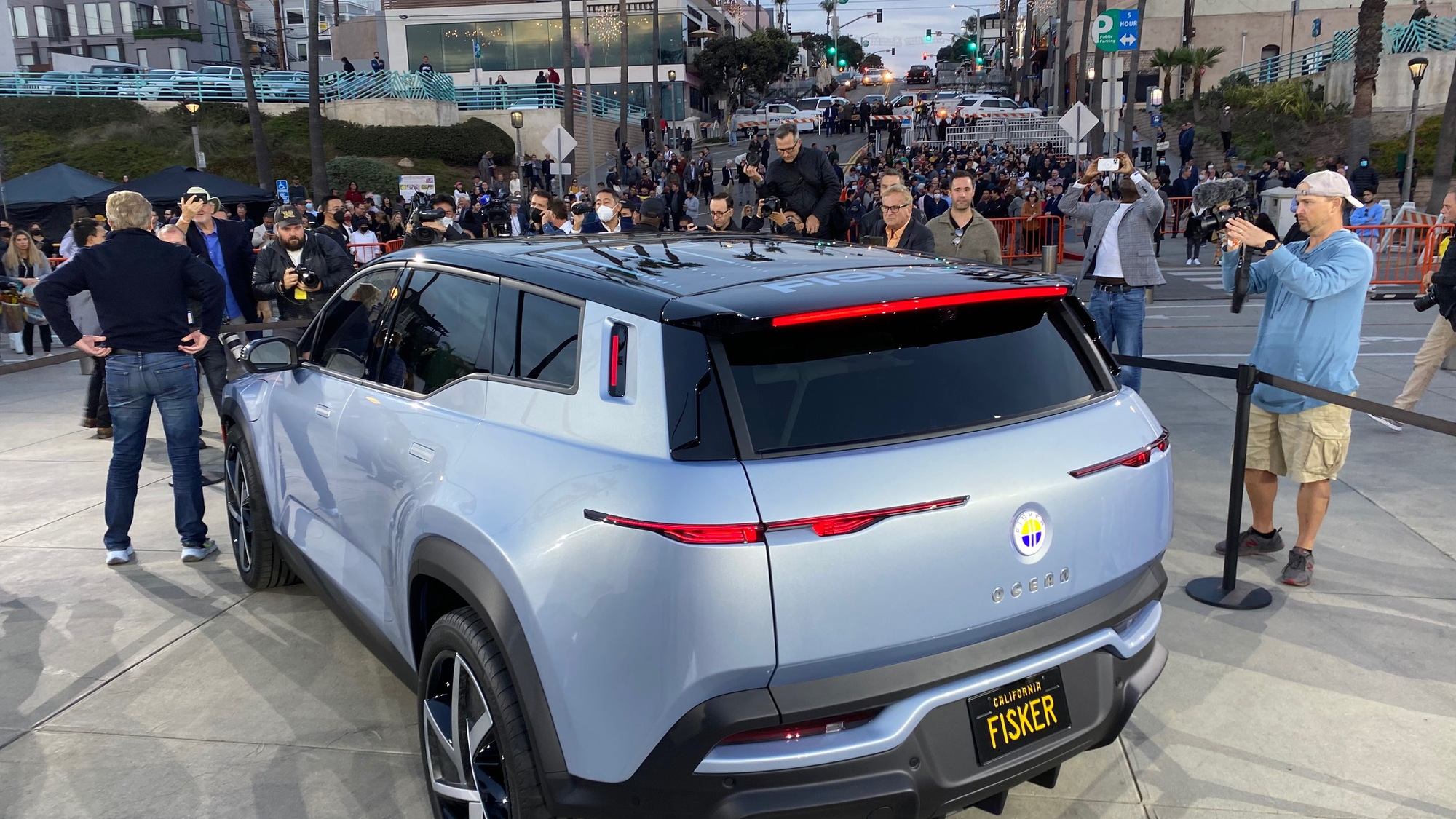 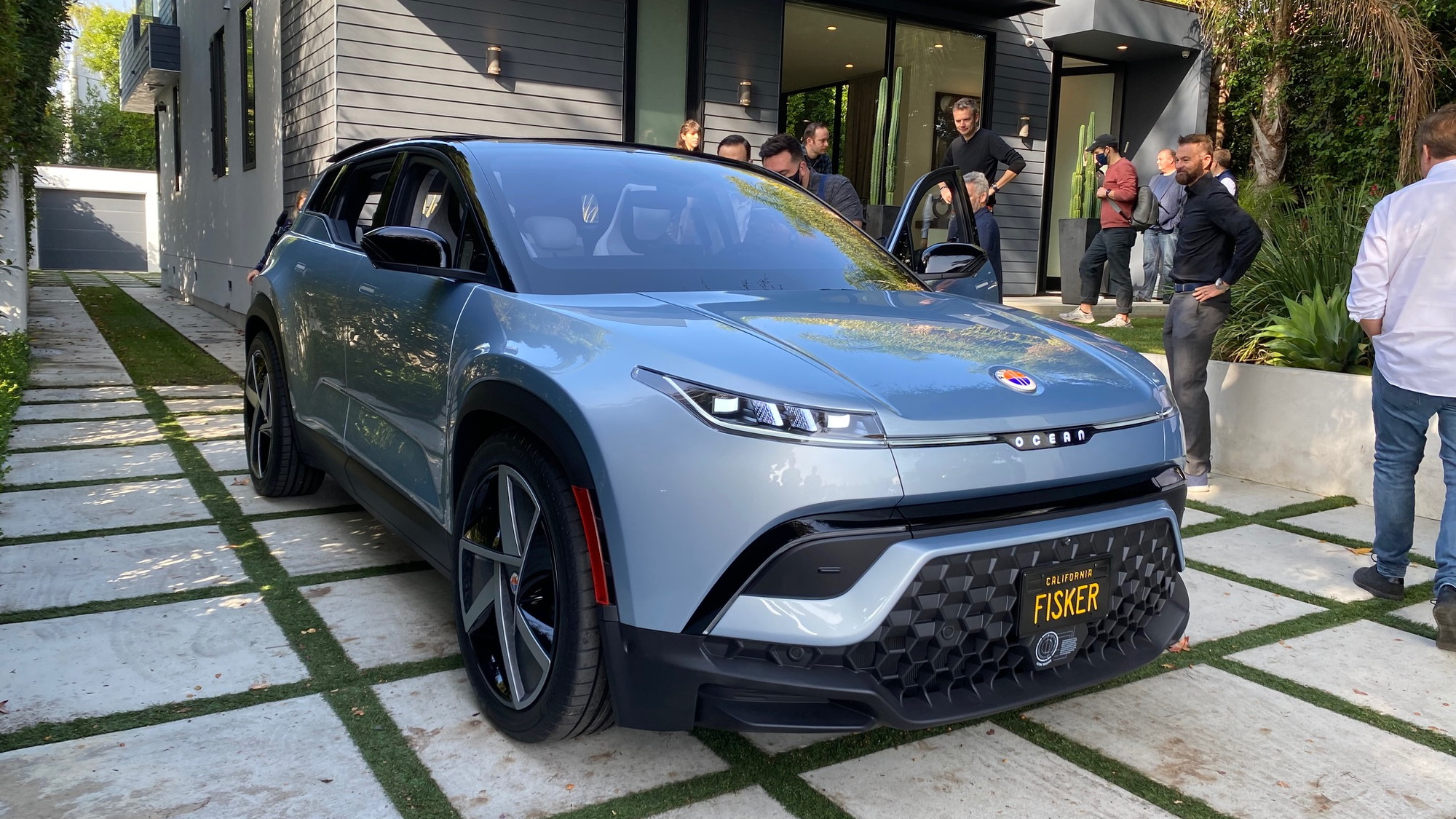 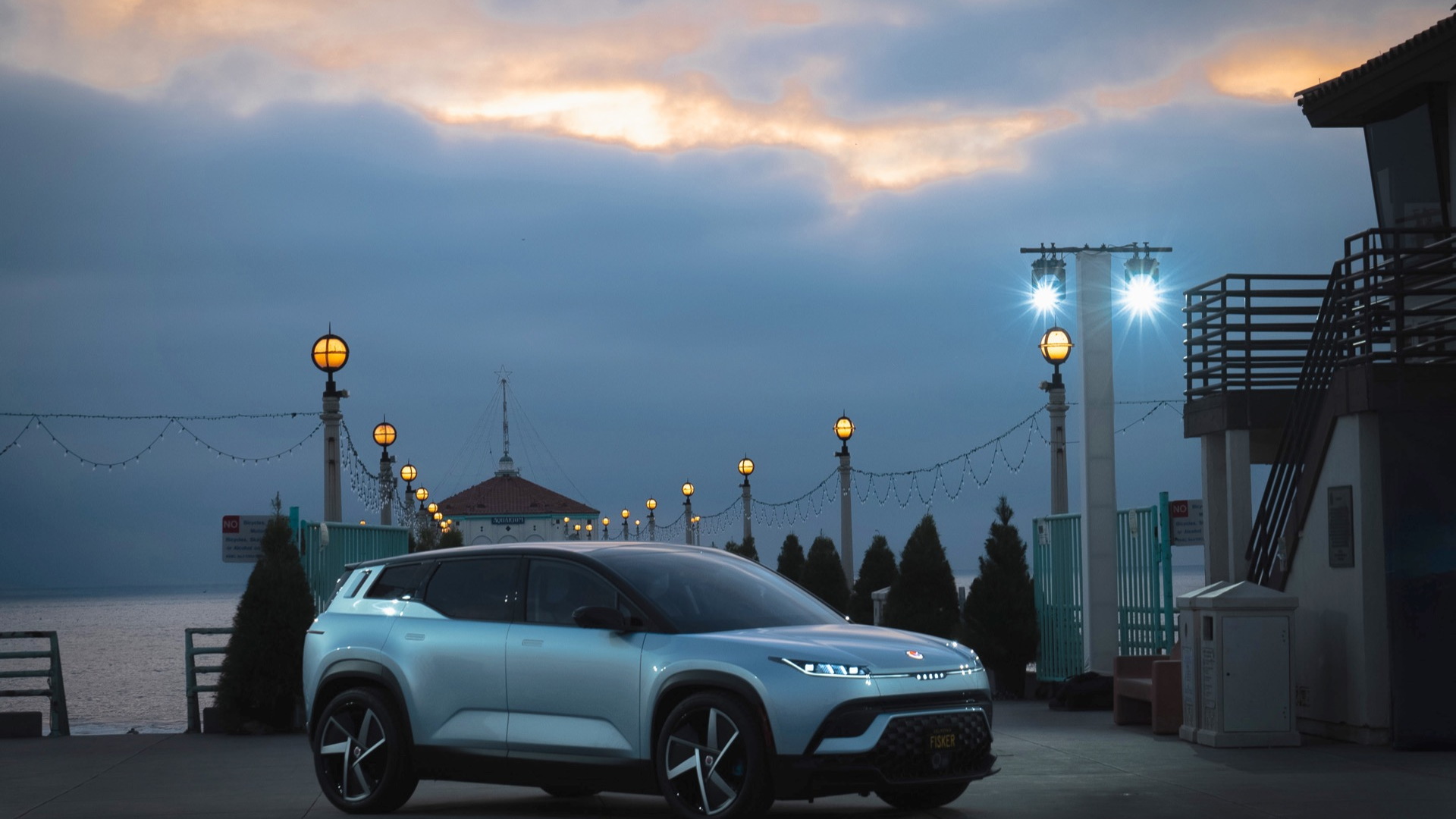 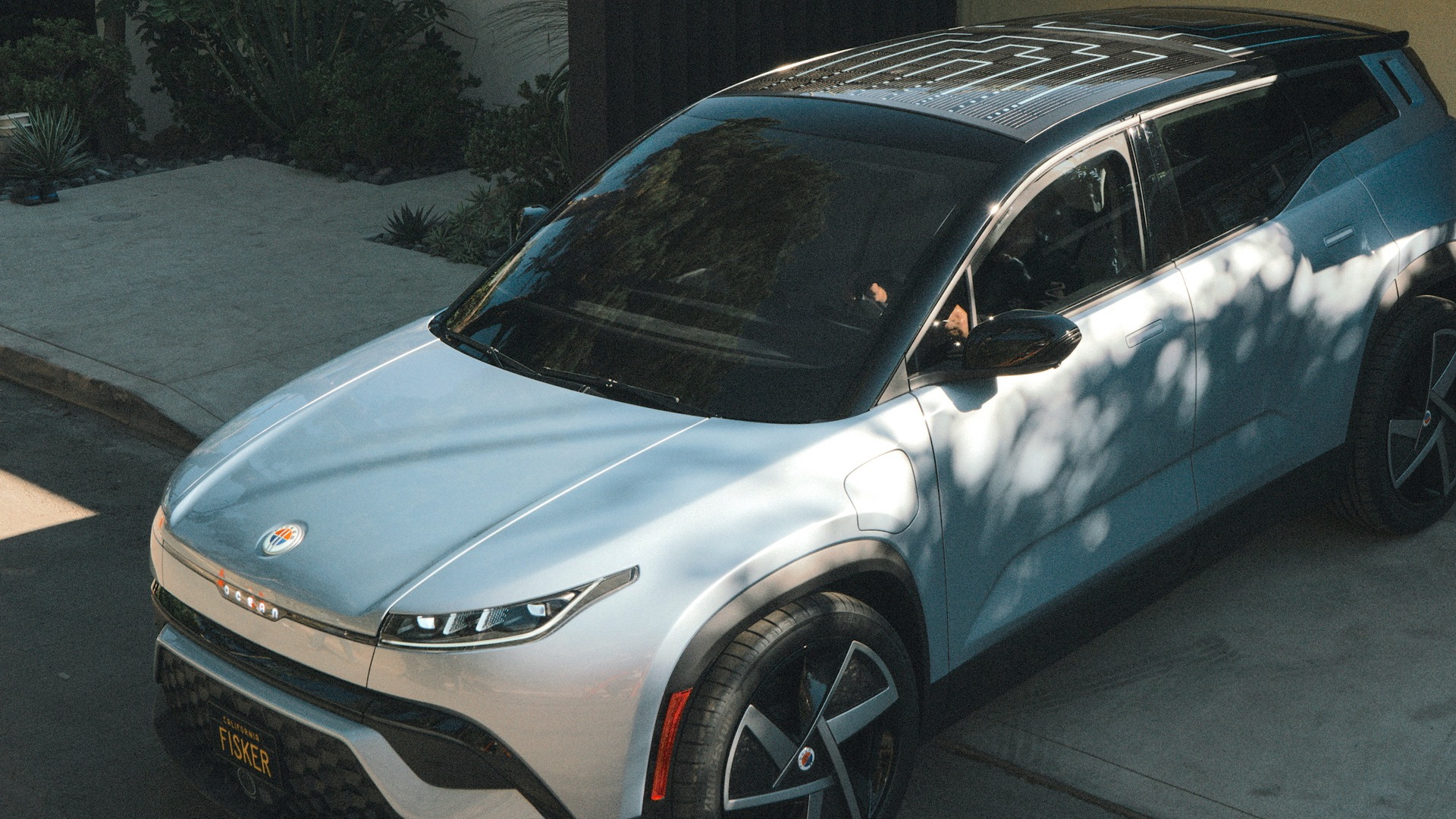 Fisker Inc. on Wednesday officially introduced its Ocean electric crossover, in production-bound prototype form—with a series of innovations that includes a solar roof, power-out capability for charging other EVs or home backup, and an infotainment screen that can rotate from portrait to landscape with the push of a button.

The LA auto show introduction is exactly a year ahead of this sustainability-focused model’s official production start—scheduled for November 17, 2022 at Magna-Steyr in Graz, Austria.

The Ocean will be offered in Sport, Ultra, and Extreme versions, with the single-motor front-wheel-drive Sport, at $37,499—before customers potentially claim a $7,500 federal EV tax credit.

The base Ocean Sport will employ lithium-iron phosphate (LFP) battery cells, from CATL, according to Fisker. Other models will include nickel manganese cobalt (NMC) cells also from CATL. Sizes and capacities of the packs haven't yet been released.

Fisker has already said that both packs in the Ocean will charge at a peak of more than 250 kw. The company plans to subsidize some Electrify America fast-charging.

The first 5,000 Ocean models produced will all be a special Ocean One edition, priced at $68,999 and will include 22-inch F3 SlipStream wheels and be offered in an exclusive matte-metallic Big Sur Blue exterior hue. Top $68,999 Extreme and One versions of the Ocean will include a SolarSky roof that the company says could add up to 2,000 miles of range per year—or up to 1,500 “under typical sunny skies” in California.

The Ultra, Extreme, and One models also include a “California Mode” that drops the front and rear windows as well as the far-back Doggie Power Windows and rear liftgate window while opening up the roof. Fisker says that the Ocean was designed to be a true SUV over all-out aerodynamics, although CEO Henrik Fisker said that he expected the model’s coefficient of drag to be quite good.

All versions of the Ocean will include the capability for vehicle-to-vehicle charging and vehicle-to-home capability, which it terms PowerHouse. Base Sport versions include 20-inch alloy wheels, specially developed Bridgestone tires to maximize range, an app-as-key system, a power liftgate, and an exterior power outlet. A 17.1-inch central touchscreen and a panoramic fixed-glass roof are also included on the base Sport.

While the small gauge cluster just ahead of the steering wheel will display the basics, in most models the 17.1-inch infotainment screen at the middle of the dash—supplied by Foxconn-owned Sharp and offering class-leading resolution, Fisker says—can be flipped 90 degrees with a button press, when the vehicle isn’t moving. That allows navigation and driver prompts to be served in vertical orientation, while viewing and entertainment functions can best be enjoyed in landscape (Hollywood) mode. There’s also a Limo Mode that allows second-row passengers to control cabin temperature and audio.

There are a few surprises in equipment and layout. One is that the single motor version of the Ocean is front-wheel drive. Another one is that—in the interest of keeping costs under control—the Ocean has no frunk.

It will offer a lot of space, though—something close to what’s considered a mid-size SUV in the U.S. The Ocean’s dimensions have changed a bit since its concept debut at CES in January 2020. Length has expanded out to 188.0 inches, while width is 78.5 inches and overall height is 64.1 inches. It rides on a long wheelbase of 115.0 inches, which helps assure a roomy interior. Fisker hasn’t yet revealed passenger capacity, but it points to 41.1 and 40.4 inches of front and rear leg room, respectively.

The company plans to establish service centers near major cities in its first two markets, the U.S. and Europe, but it will generally skip the stores and galleries that some other EV startups have focused on. FIsker is asking for a $250 deposit for reservations, but it also promises a Flexible Lease program for $379 a month plus a $2,999 initiation and activation fee—allowing 30,000 miles a year plus the ability to walk away at any time without a penalty.

Home hardware to take advantage of the Ocean’s car-to-car, car-to-grid, and car-to-home capabilities is on the way, too—as well as many more details between now and next November.