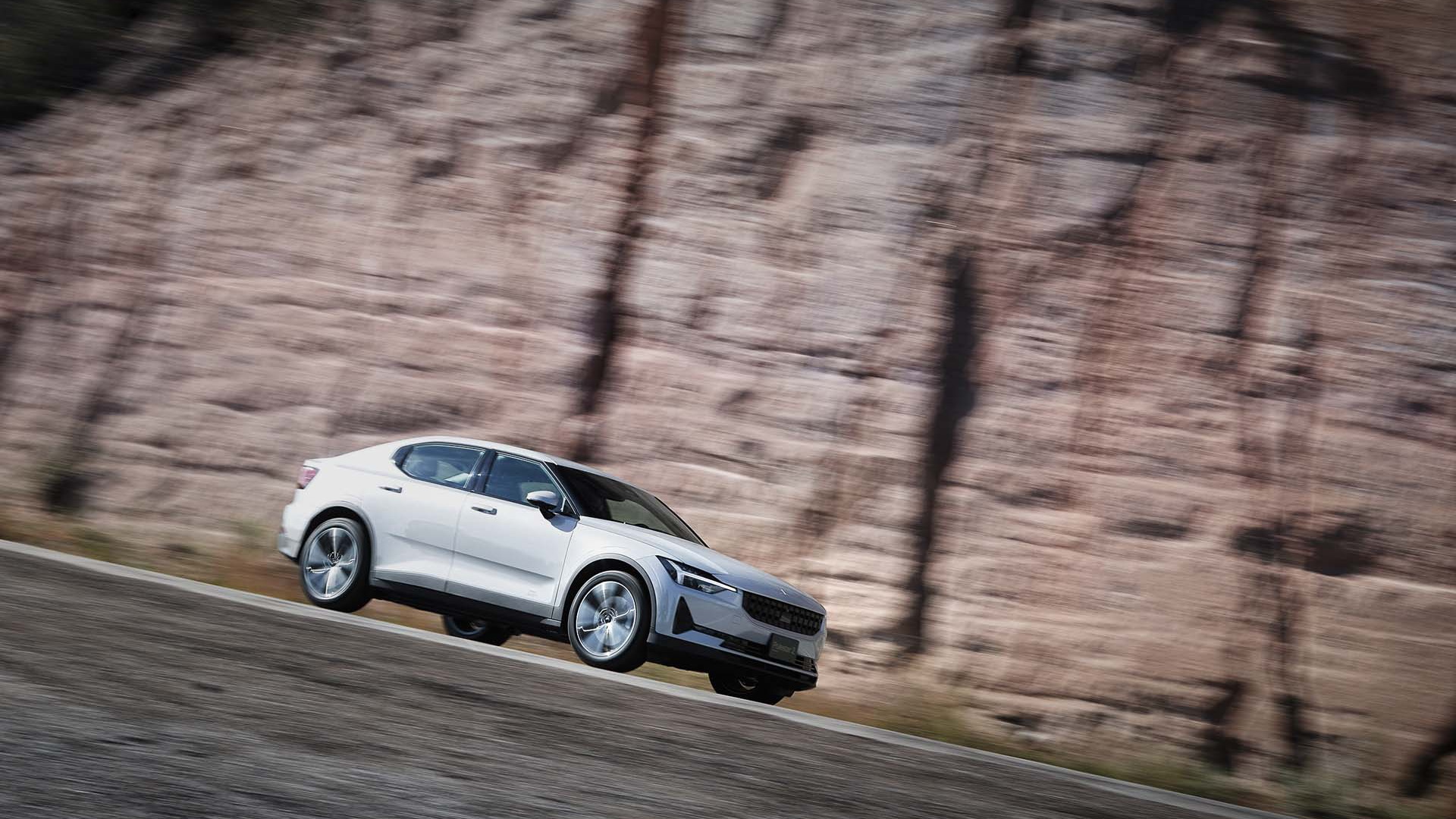 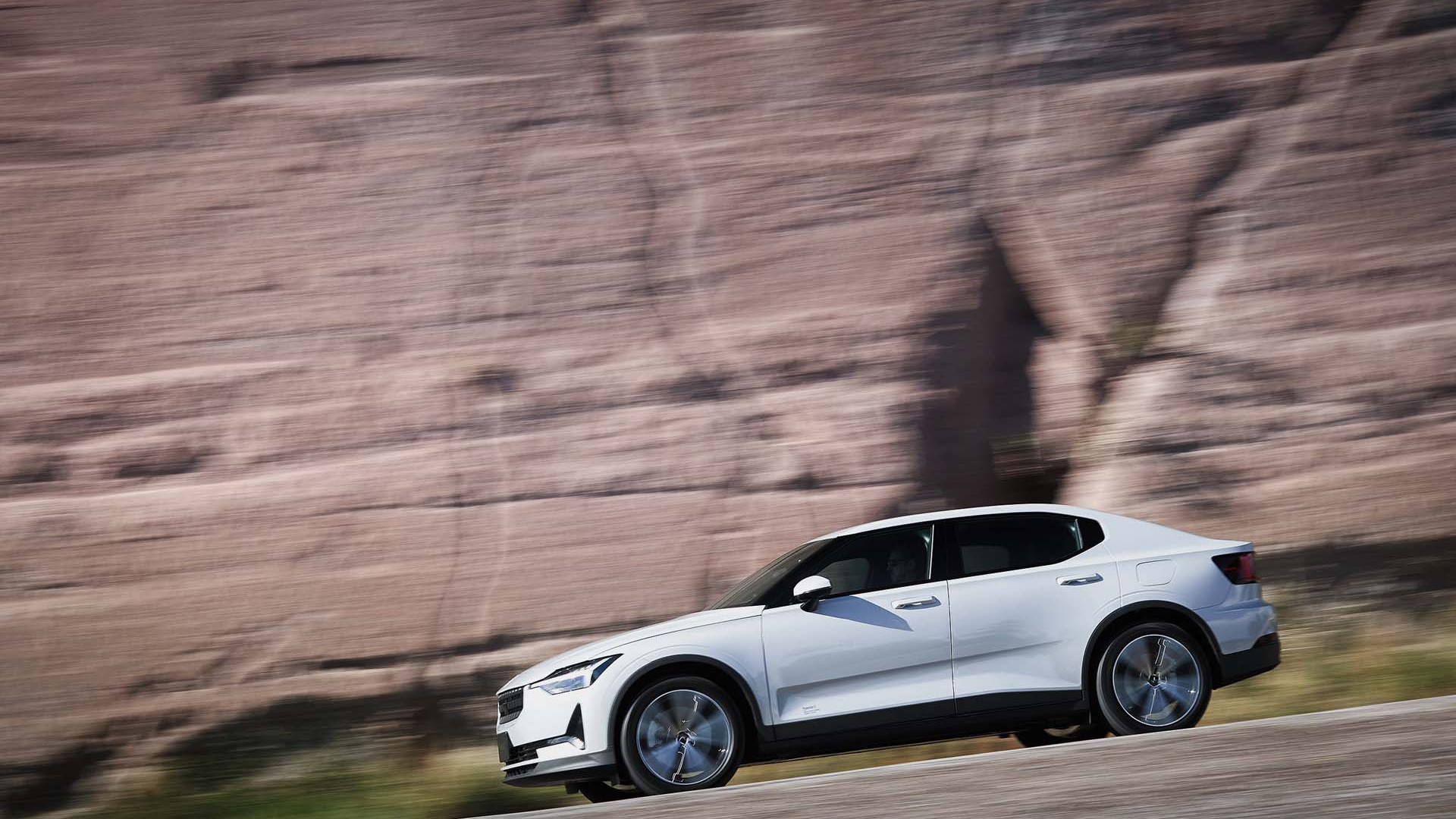 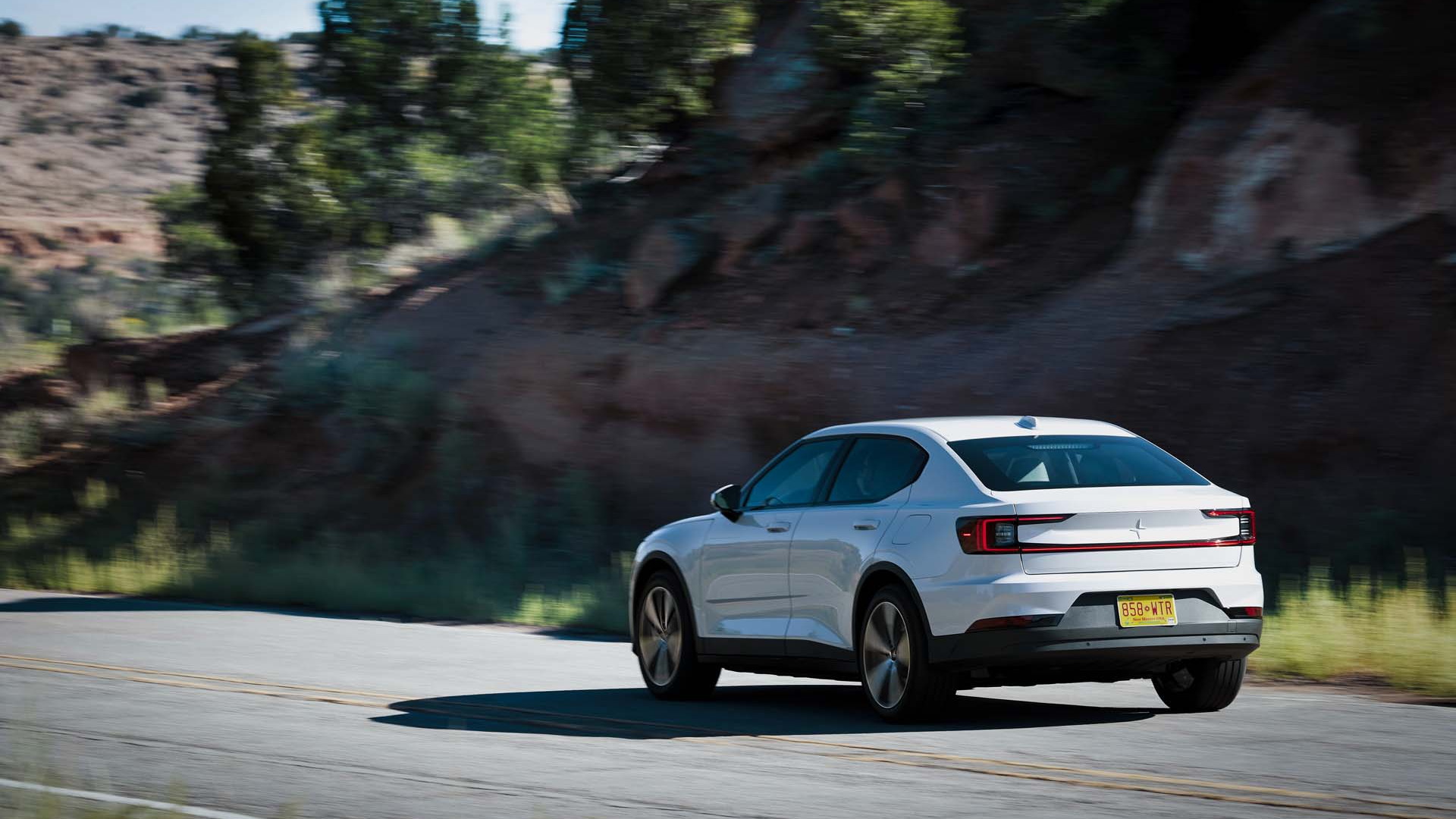 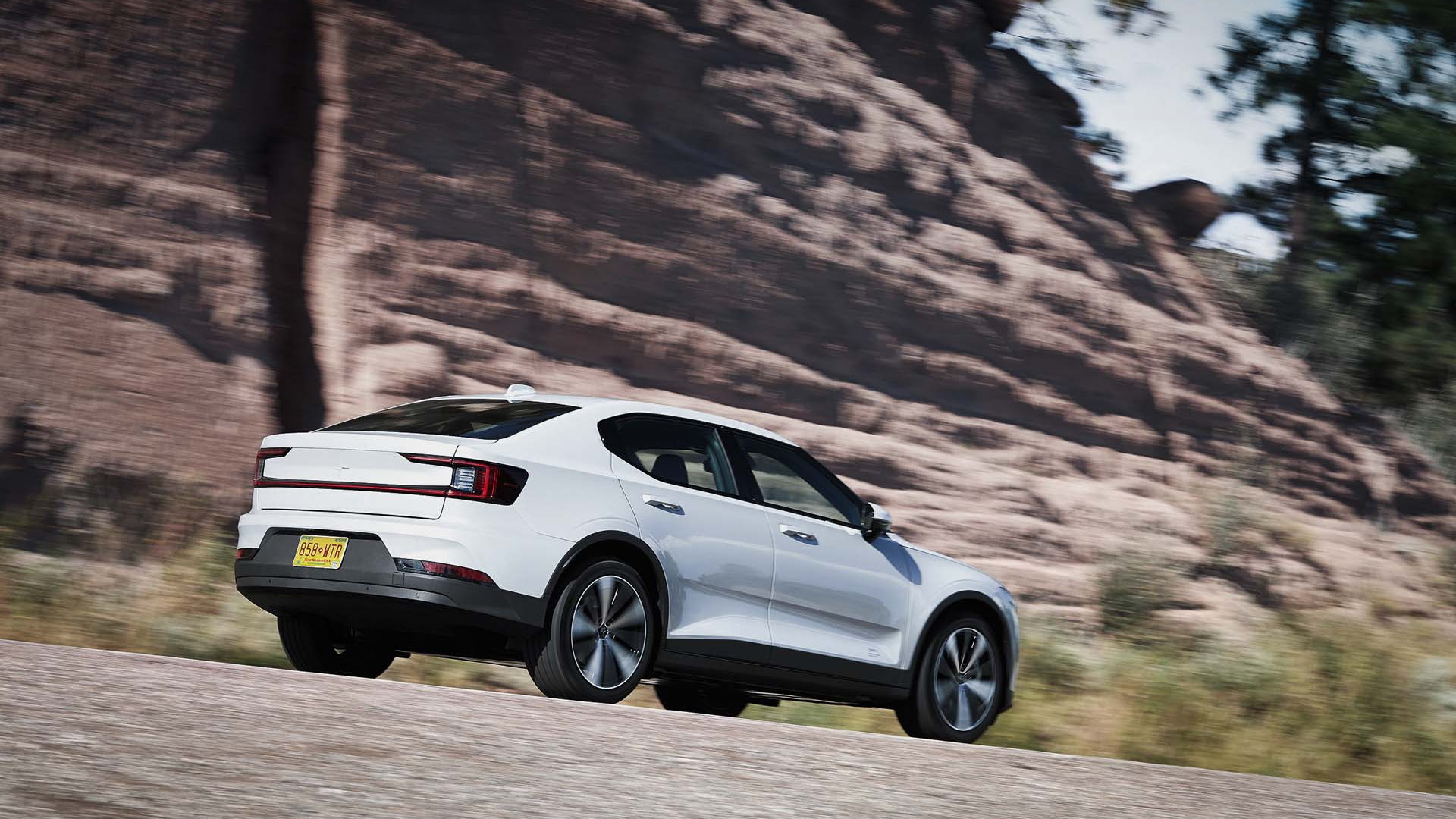 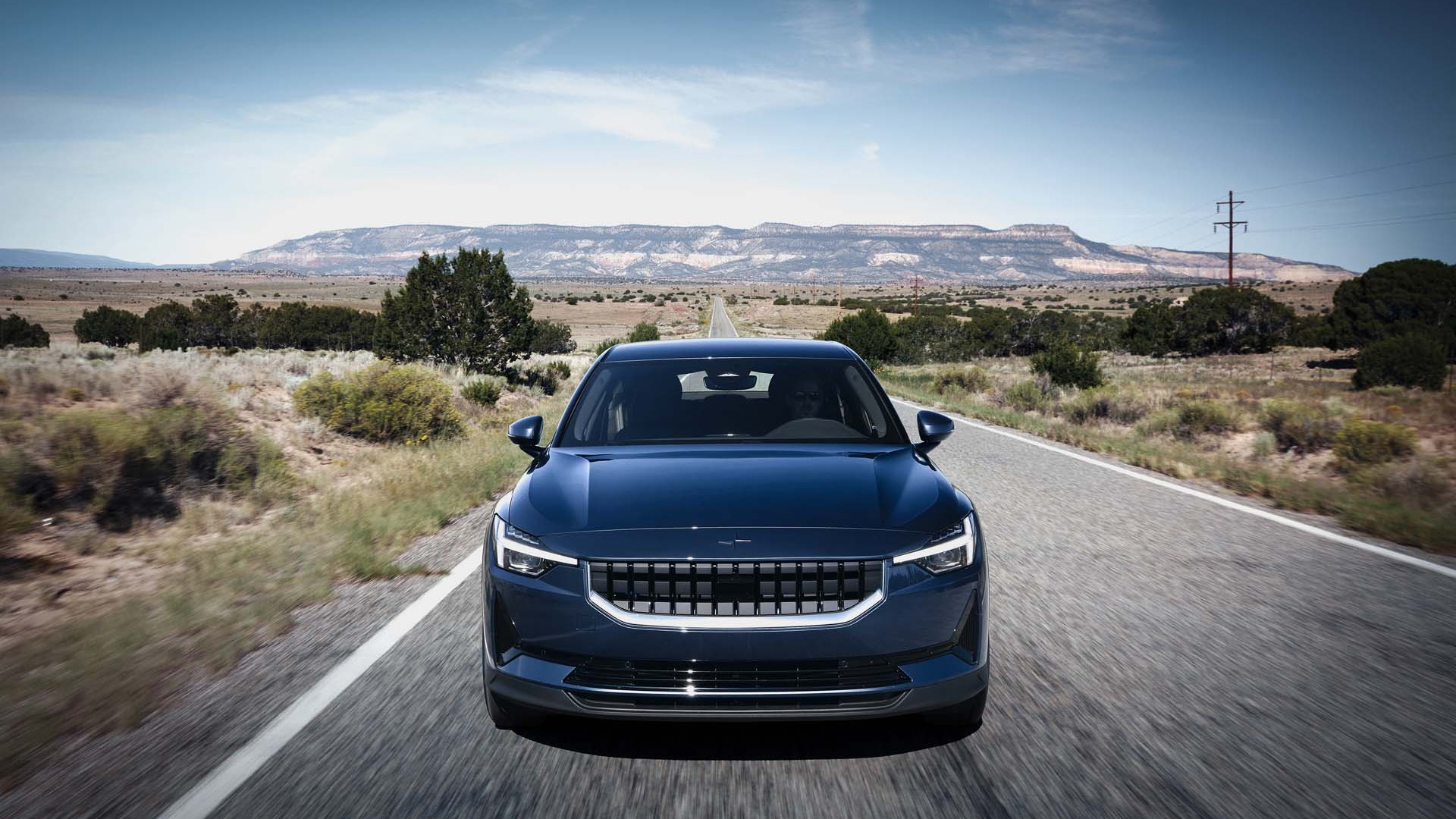 Suddenly there’s an attractive, premium, reasonably priced, electric car that doesn’t have a Tesla badge. The question is whether that matters and what concessions—or advantages—that brings with it.

Polestar flew me to Santa Fe, New Mexico and tossed me the keys to the 2022 Polestar 2 single-motor front-wheel-drive model. I aimed to find out if a lower price point and more range for the 2 fixes some of our qualms from the launch in 2021.

When it arrives in January the long-range single-motor variant of the Polestar 2 is estimated to have an EPA-rated 265 miles of range, which is three more miles than that of the standard-range plus Model 3 (currently serving as the base model in the lineup).

Polestar makes 75 kwh of the 78-kwh battery pack usable. It weighs 849 lb, or about 1,100 with the aluminum structural casing.

Polestar representatives told Green Car Reports the motor and inverter in the single-motor cars are the same as what’s in the dual-motor cars, but the gearbox and its 10.51:1 ratio is new for the front-wheel-only drive system.

My tester indicated it had a 100 percent state of charge and 260 miles of range when I slid into the driver seat with an outside ambient temperature of about 70 degrees.

Our 83-mile drive route consisted of a mix of highway cruising and backroads that were winding both up and downhill.

After that the range meter suggested there were 180 miles left. From this very short sample, Polestar’s ratings don’t seem to be optimistic, but they seem to be spot on to what many drivers might see in the real-world.

As an enthusiast, I’m here to tell you openly that a front-wheel-drive car starts, dynamically, at a disadvantage in terms of handling and composure. The Polestar 2’s no different, and the Model 3 has the upper ground here.

The single-motor Polestar 2 has a weight distribution of 55:45, which would be far more ideal if inverted with a rear-wheel-drive setup.

On the highway and around town it’s hard to fault the Polestar 2 single-motor. It has V-6 like grunt with that instant electric torque one will only find in an electric car. Its 231 hp and 243 lb-ft of torque are what one would file under “adequate” but hardly neck snapping. Polestar said the single-motor 2 runs 0-60 mph in 7.0 seconds, and my butt dyno says it can do a bit better.

There’s surprisingly no torque steer when the accelerator is put to the floor regardless of speed. But start pushing the Polestar 2 single-motor around a switchback and it’s clear the car is being pulled around a corner by the steering wheels rather than pushed while the front wheels control the direction. The Michelin Primacy 4 tires are meant for comfort and control, not speed and precision, though they did an admirable job of letting me know exactly where the limit was.

Look at the Polestar 2 from the inside or out and it’s not clear if it’s a single-motor or dual-motor car. There’s no visual markings, no distinct differences. Even the wheels and tires are the same.

This isn’t a bad thing, because the Polestar 2 is attractive looking. There’s no question that visually this thing is related to Volvo, but it has its own distinct elements in terms of lighting, roofline, and details such as the Chiclet-like grille.

The fastback design looks good, and the best angle is either the rear view or rear three-quarter view. The entire exterior package is attractive, but it’s a bit chunky and less curvaceous than a Model 3.

Inside too, the Polestar 2 is clearly related to, but not the same as, its Volvo cousins. The standard 12.3-inch digital gauge cluster and 11.2-inch touchscreen seem familiar, but feature their own design layout.

The touchscreen infotainment system runs on Google’s Android Automotive operating system, which to be clear, is not Android Auto. With just a few minutes it’s rather easy to understand the layout and navigation, but the system feels, at this time, half baked.

There’s no AM or satellite radio, nor is there Apple CarPlay support. As an iPhone user I felt out in the cold. Yes, using Google’s assistant I was able to send and receive text messages via voice while driving. But even that didn’t work terribly well compared to Siri.

Notably, all three of these things (satellite radio, AM radio, and Apple CarPlay) will be coming via over-the-air software updates later this year, according to Polestar representatives. But for right now, Polestar 2 owners are out in the cold on these features.

Base isn’t really base

A base Polestar 2 doesn’t feel like a stripped-down economy car. The seats and part of the dashboard are covered in a fabric that looks and feels terrific, with an almost retro design that while not quite houndstooth, reminded me of that style. The trim on the dashboard and center console is a 3D-design that adds depth where wood simply looks dull and flat. Surprisingly, the base interior looks better in my eyes than the Plus Package and its reconstructed wood trim or the leather interior option.

But the real story with the Polestar 2 is the build quality. As I walked up to the Midnight Blue 2022 Polestar 2 it passed a personal test in the way no Tesla I’ve seen up close ever has: Every body panel lined up and was painted correctly, and seals were seated, and the doors close with a solid Volvo-like thunk. In fact, the entire car had Volvo-like build quality, something that simply can’t be said of the Model 3, including the one my sister owns as her daily driver.

For all that is good with the Polestar 2 the less expensive single-motor version doesn’t fix the compromised packaging at some level. Front seat headroom is improved thanks to the metal roof (instead of glass), but the car is still based upon an ICE platform. This means the battery modules are placed under the footwells, in the center tunnel, and under the rear seat. The rear seat is mounted stadium style, which has rear-seat occupants sitting up high, leering over the driver’s shoulder, and there’s a lack of headroom. At 5’10” I had only a few inches between the top of my head and the roof. Rear-seat foot room is also at a premium, and up the frunk is a larger-than-it-looks 15.4 cubic feet.

For those who want an electric car as a daily driver, don’t need the Supercharging network to charge or take frequent road trips, and are willing to live with some packaging compromises, the Polestar 2 makes a lot of sense. Suddenly there’s a premium electric car with actual build quality that can be had for a reasonable price should someone be willing to live outside the Teslaverse.

Polestar flew us to New Mexico and put us in a hotel to bring you this first drive review.