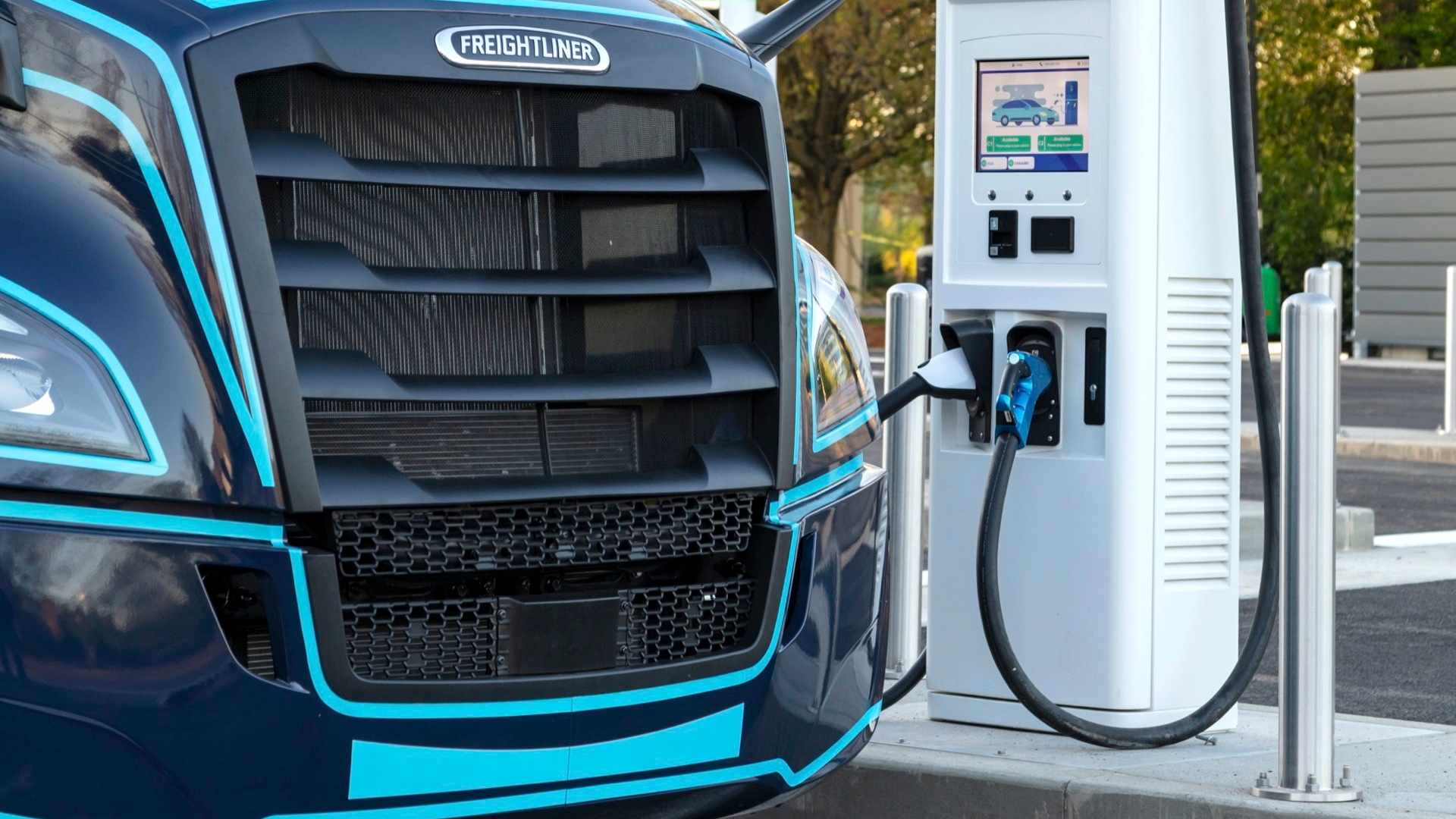 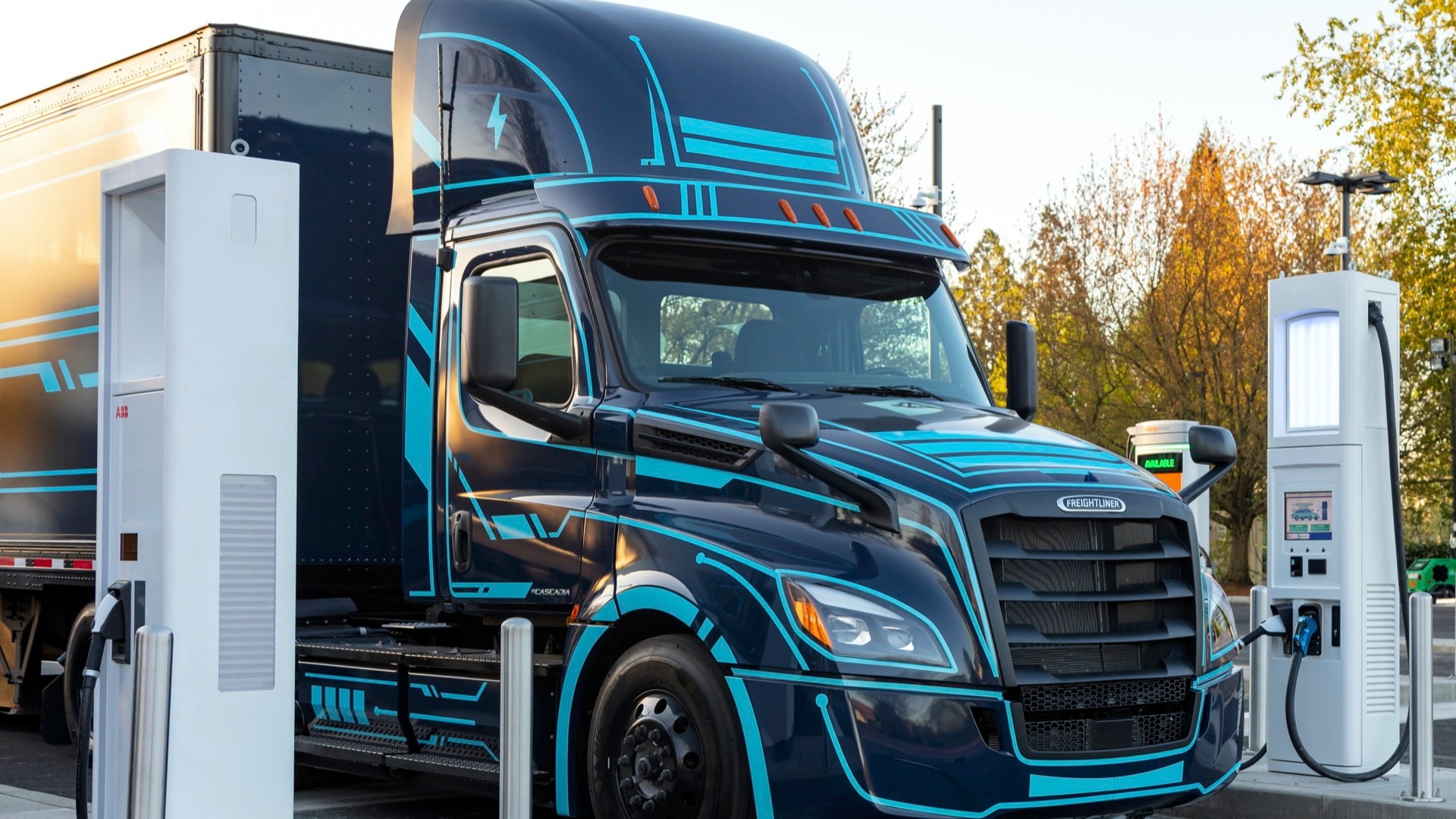 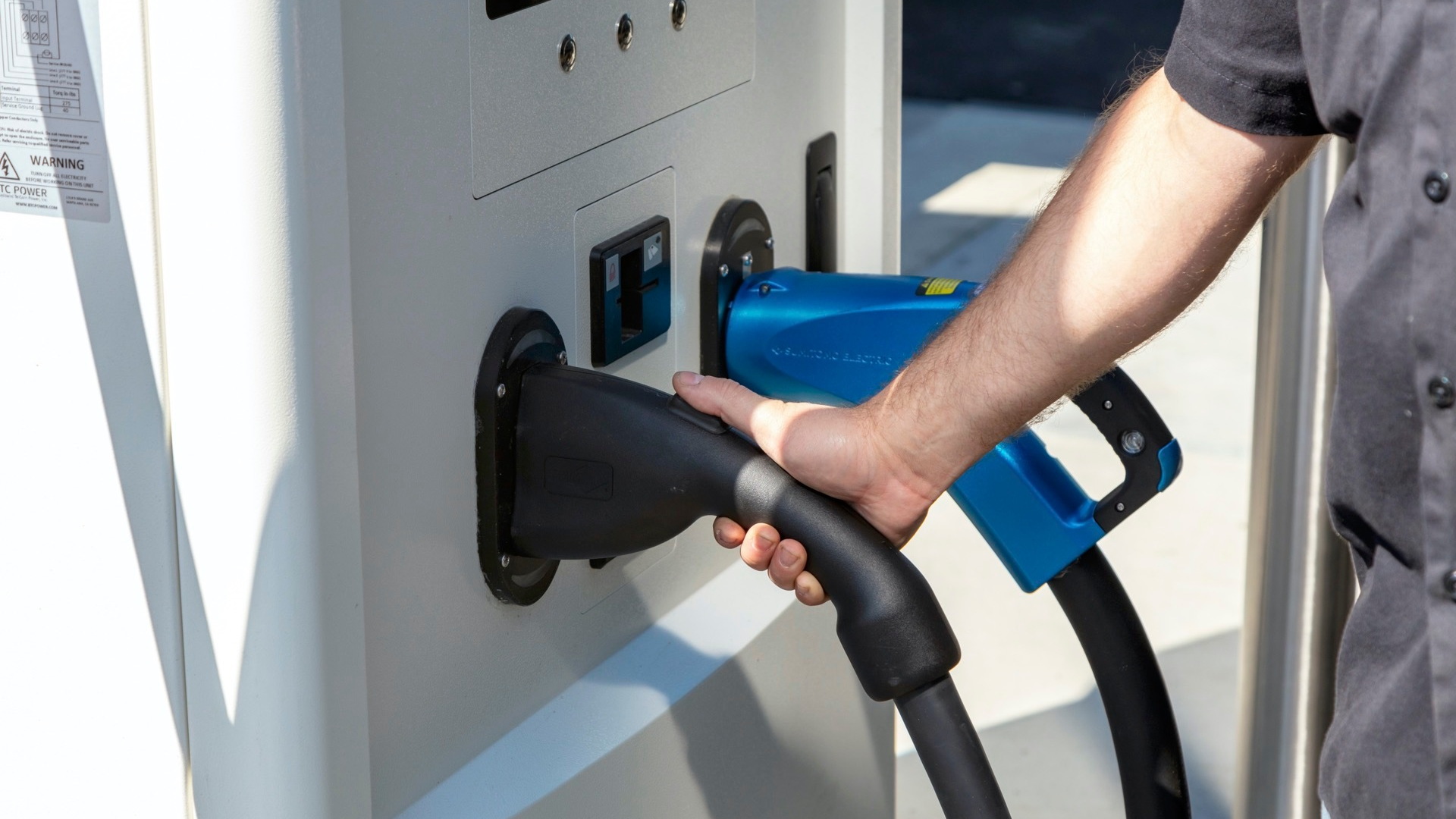 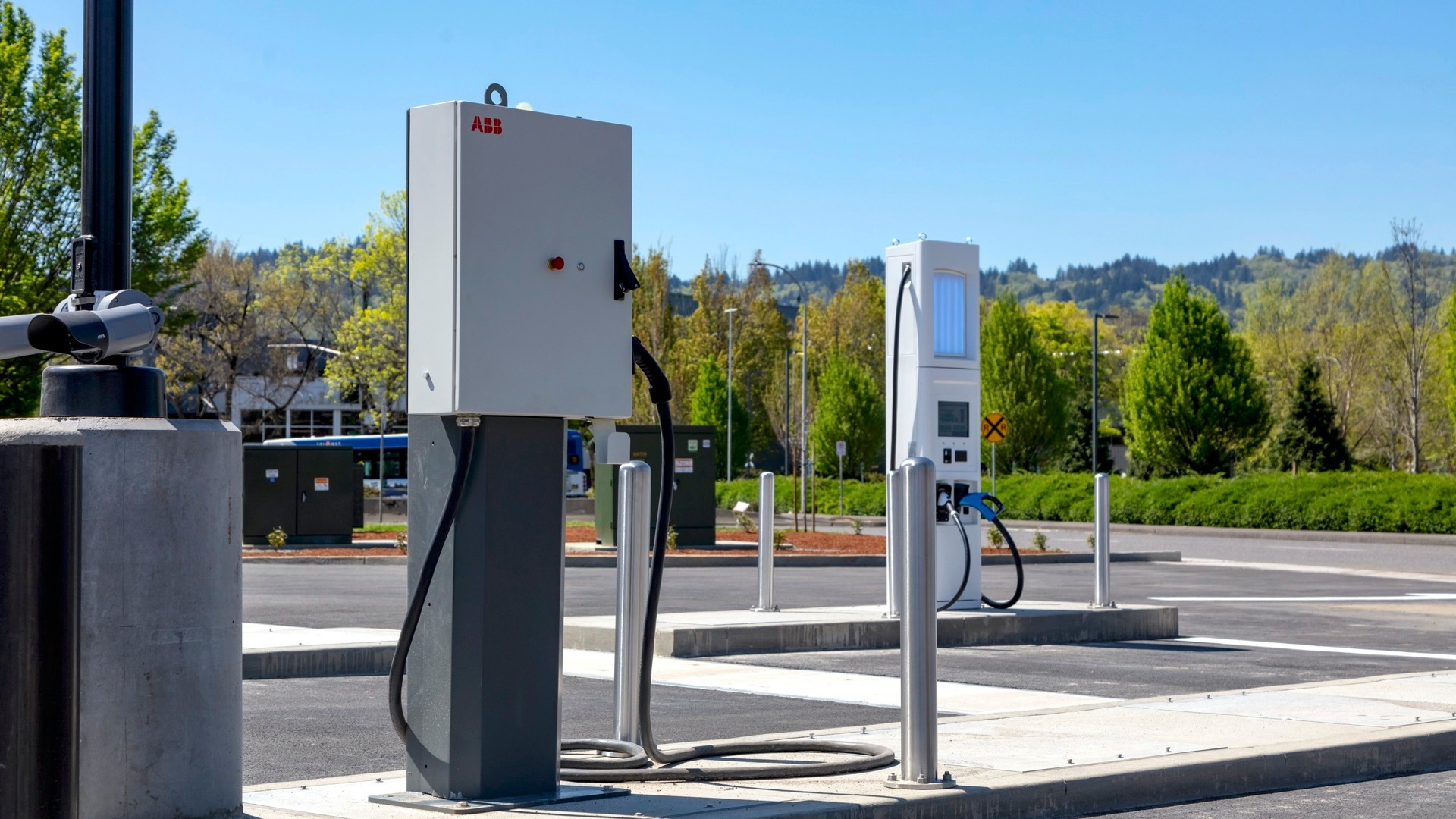 Big electric trucks have big charging needs. They’re megawatt-level charging needs, when you consider how quickly trucks will need to pack the energy back in and not interrupt their daily, time-is-money business too much.

For instance, the prototype Freightliner eM2 truck I rode in has a maximum 315-kwh (usable) battery pack, offering a range of up to 230 miles fully loaded, although the average daily use for this type of truck is about 95 miles a day. Although the truck is seductively quick and quiet in all the ways electric cars make the translation, charging might be a barrier for the occasional longer use. That's a long chunk of time with current CCS chargers, but a future megawatt charging system might get such a truck back out with an 80% charge in less than it takes to get a sandwich and take a bathroom break.

While some of today’s electric passenger vehicles have DC fast-charging at 150 kw or so—with Teslas at a max of about 250 kw—manufacturers see a peak of at least four times that to 1.0 megawatt (MW) as necessary. And stations need to be built to support multiple trucks being charged that rapidly, all at once.

Industrial demand on the grid

If there were 10 electric heavy-duty trucks, all charging at 1 MW, that’s 10 MW—about the same as a semiconductor plant, according to Joe Colett, product manager for emerging technologies at PGE.

“So that’s kind of the scale that we’re looking at—when something that used to show up on our grid as a few hundred kilowatts, a truck stop, says, ‘Hey we’re gonna be installing two megawatt chargers,’ now that truck stop looks like a semiconductor plant,” Colett said.

“That means that the grid has to grow in different ways that might not be part of the plan yet,” Colett added. “The grid to support that demand might be in industrial parks, not at a fueling station next to the highway.”

Fundamentally, Electric Island hopes to do many of the same things that Portland’s Electric Avenue did a decade ago for electric cars and their charging hardware: help utilities, charging companies, and vehicle makers understand charging demands, test different charging hardware, and consider best practices for future charging stations.

If you ignore the grid concerns for the moment, the current state of commercial-truck charging looks a bit like where the market was with respect to EVs a decade ago—still waiting for a standard that would permit fast-charging rates that might compare to the time spent refueling a diesel truck.

Nate Hill, head of charging infrastructure for Daimler Trucks North America says that “in the near future” it will have systems that are capable of delivering more than one megawatt from a single dispenser. But the company isn’t yet giving an arrival date for that.

Megawatt standards require the alignment of a lot of OEMs. Hill said the connector will be “dramatically different” than the CCS connector, and the design for it is still being tested in different iterations.

The standard for megawatt charging—called Megawatt Charging System (MCS), and being overseen by the CharIN organization that also oversees the CCS standard—remains under development, and even Tesla has opted not to go it alone.

Daimler Trucks’ first generation of electric trucks won’t support the MCS standard, Hill confirmed, but future trucks will with “some significant changes to the architecture.”

As an interim solution, there will be dual-port fast-charging on some Daimler Truck models to achieve a faster charge rate—if concerns over cooling and battery degradation permit that, of course.

Build a 5-MW station and the electric trucks will come

Since the connectors used for now at the station are all CHAdeMO and CCS—and good for 800V—they’ll work on just about any electric car or SUV, too.

“We knew that we’d have customers coming in here that would need the CHAdeMO connector—like with a Nissan Leaf—and we decided to include that even when none of our vehicles use that,” said Hill. “We’re trying to be good citizens and support the entire EV world.”

The site is a testbed of sorts, so the cabinets are mounted on plates versus right on the cement, which makes them easy to change out for that MCS hardware when it arrives. Another long plate covers an open trench that lets them easily reconfigure cabling.

There are provisions to add stationary storage in the near future, Hill said, to be used for things like demand buffering, in an adjacent fenced-in area called Power Garden.

Part of a future charging network?

The station also fits right in as a first stop along the West Coast Clean Transportation Corridor, which aims to establish a backbone of 27 high-power DC fast-chargers along 1,300 miles of I-5 plus other connecting highways in California, Oregon, and Washington. This station wasn’t designed specifically for that, Hill says, but it fits the blueprint targeted by that project.

Hill also admits that some private charging depots are already larger than this one, but this is the largest public station, to the company’s knowledge. It’s in a strategic position just across the street from the company’s North American headquarters, and with nearby restaurant and takeout options, it’s strategic for users as well.

Electric Island will do more for the companies involved. It aims to look at second-life uses for battery packs, onsite power generation, and smart-grid applications. They also hope that the site “will help accelerate the development, testing and deployment of zero emissions (tank to wheel) commercial vehicles,” according to a jointly issued press release.

Maria Pope, PGE’s president and CEO, told Green Car Reports that this was a truly collaborative effort and involved the utility getting to understand the company’s manufacturing and charging needs.

“Reliability is becoming much more of an issue with regards to energy versus just the kilowatts that we sell,” Pope said. “So we’re going to need to look as an industry, creatively, about how we price our products, what people appreciate, and how they use electricity that’s changing very rapidly.”

Getting to scale will create a stronger grid

Deploying electric transportation at scale will be a challenge for utilities but result in something better for everyone, Pope added. “That will actually in my opinion create a more stable and more reliable grid as the transportation becomes more electric.”

While the greening of the commercial fleets is something to celebrate on Earth Day, there are some reality checks in order: Despite all the hype from startups and new ventures in this sector over the past couple years, the electric commercial vehicle market remains a very small fraction of a percent of the market.

As energy consultancy Wood Mackenzie pointed out last year, there were just over 2,000 electric trucks in the U.S. at the end of 2019, and the electric commercial truck market is expected to grow to more than 54,000 trucks by 2025—still a small fraction of the market.

With advances in battery chemistry, the electric truck market could do better than that, and reach a tipping point faster than the electric car market has; but projects like Electric Island are essential pieces for making that a reality.