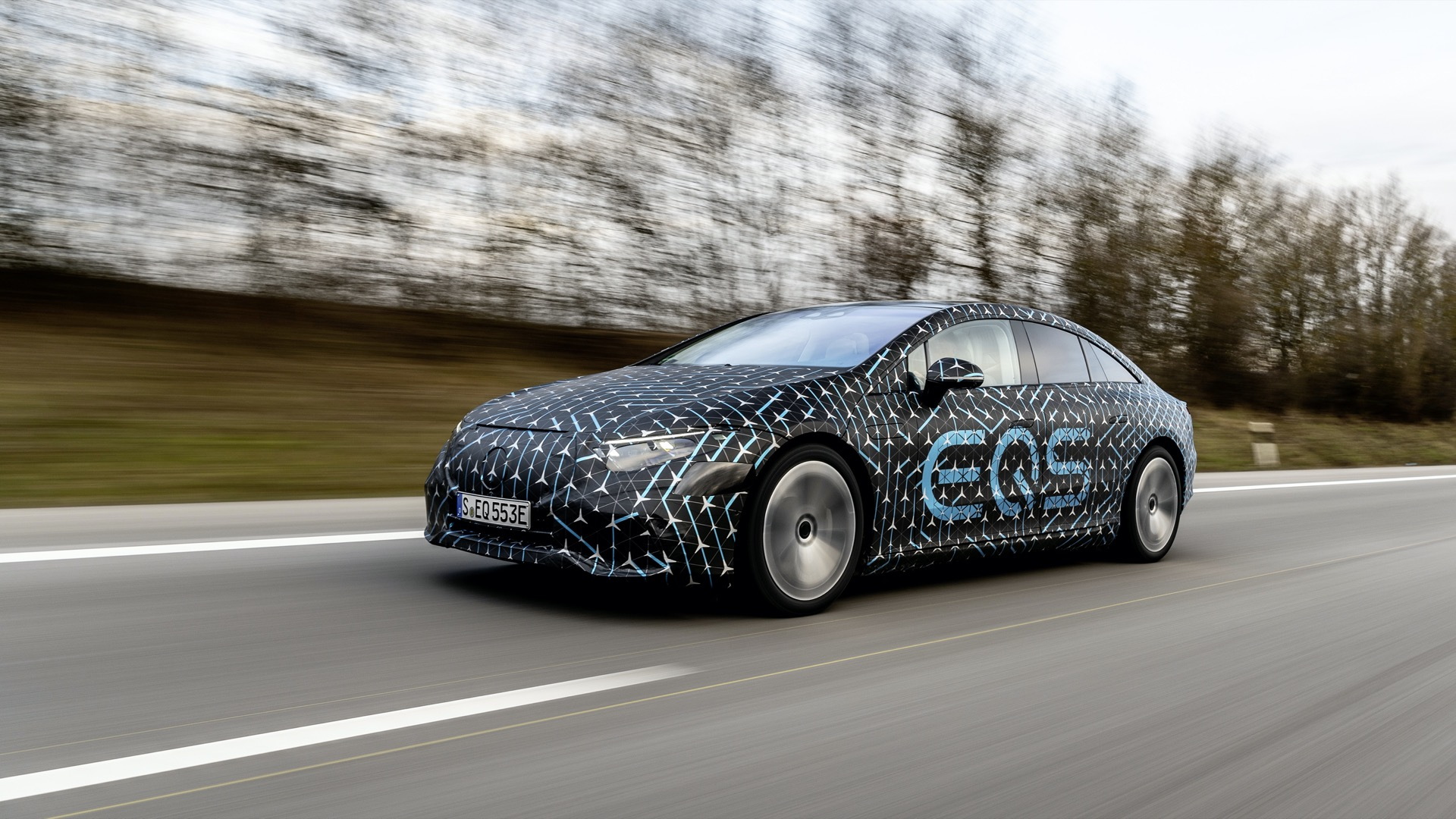 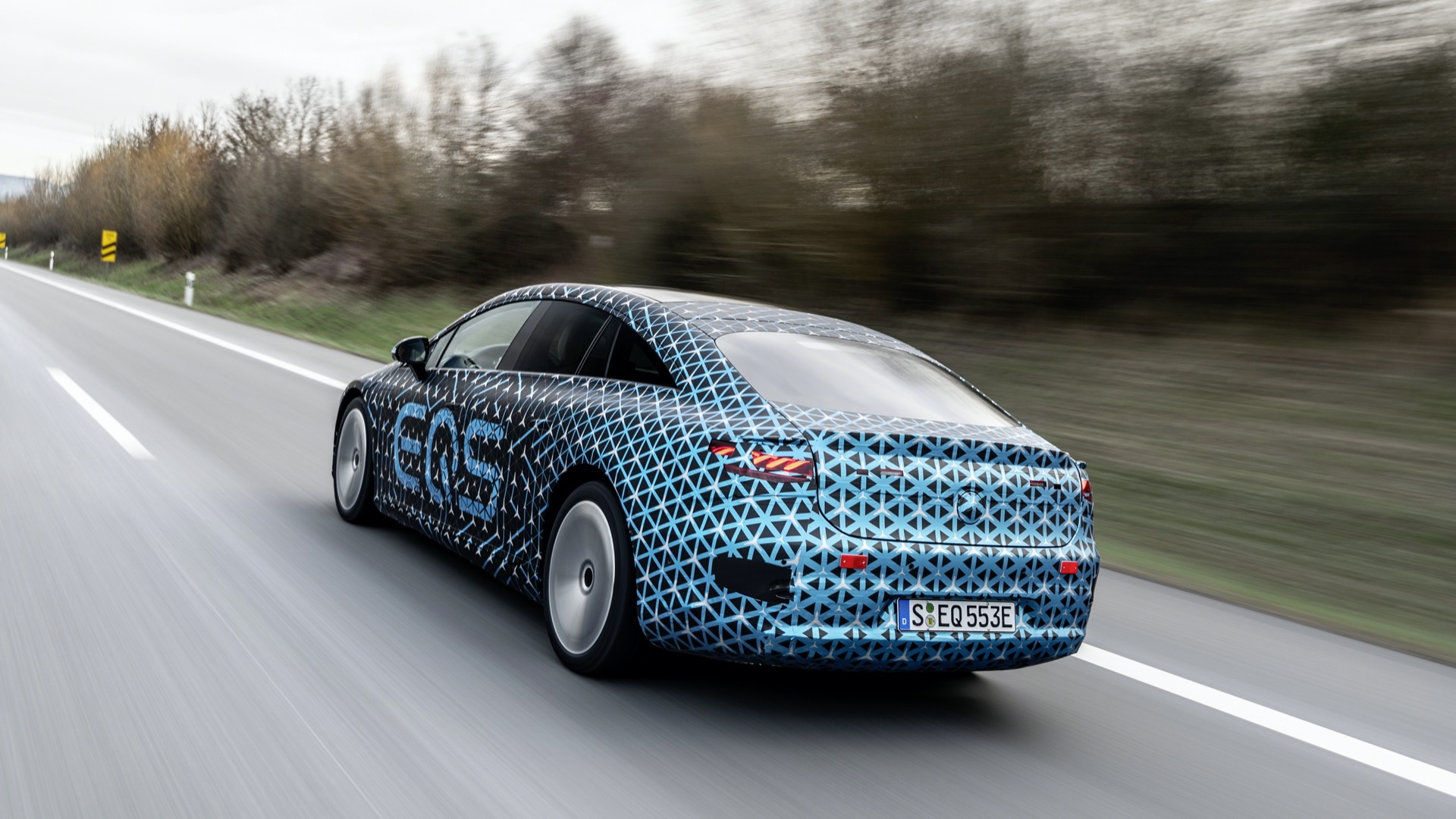 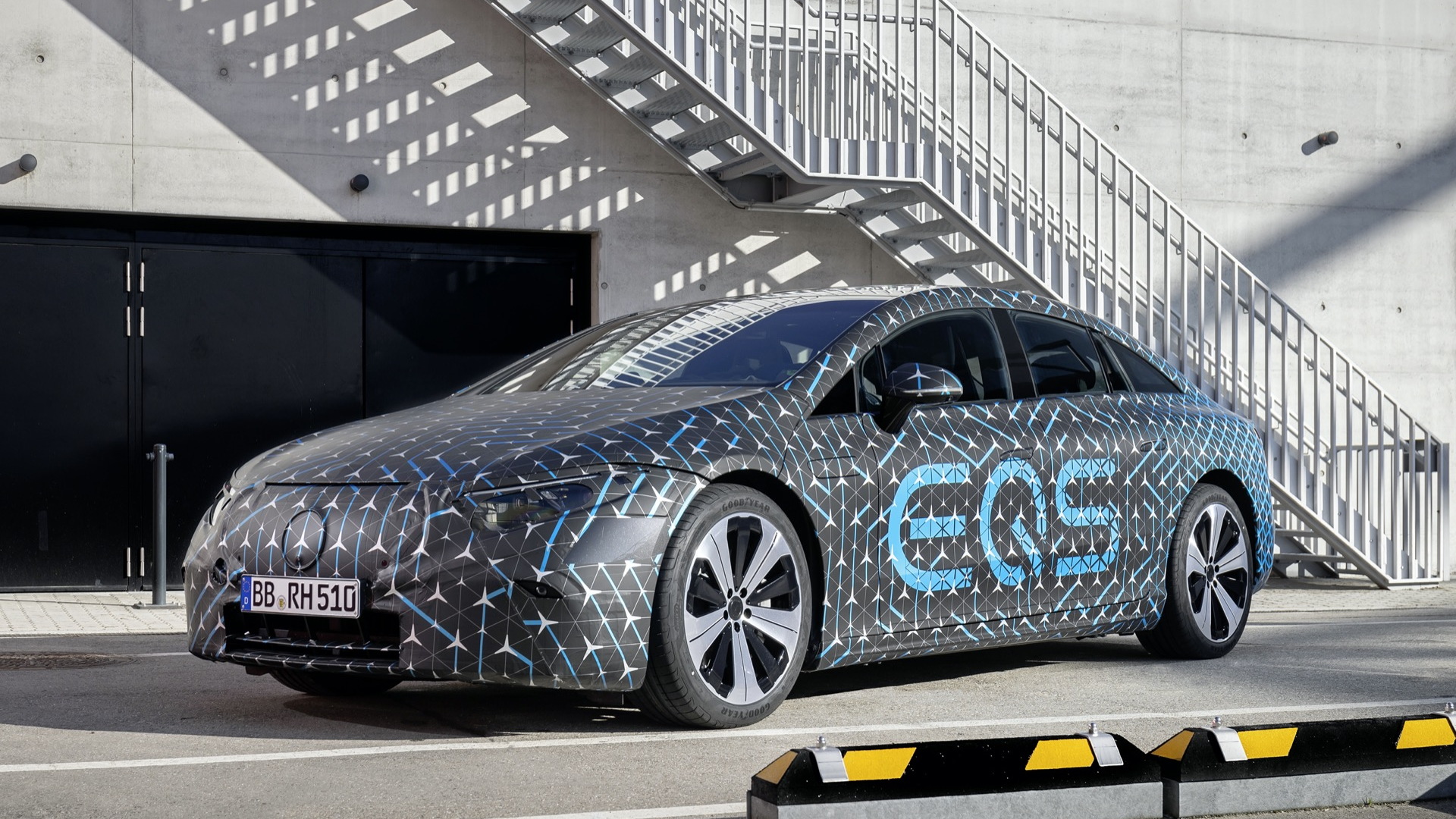 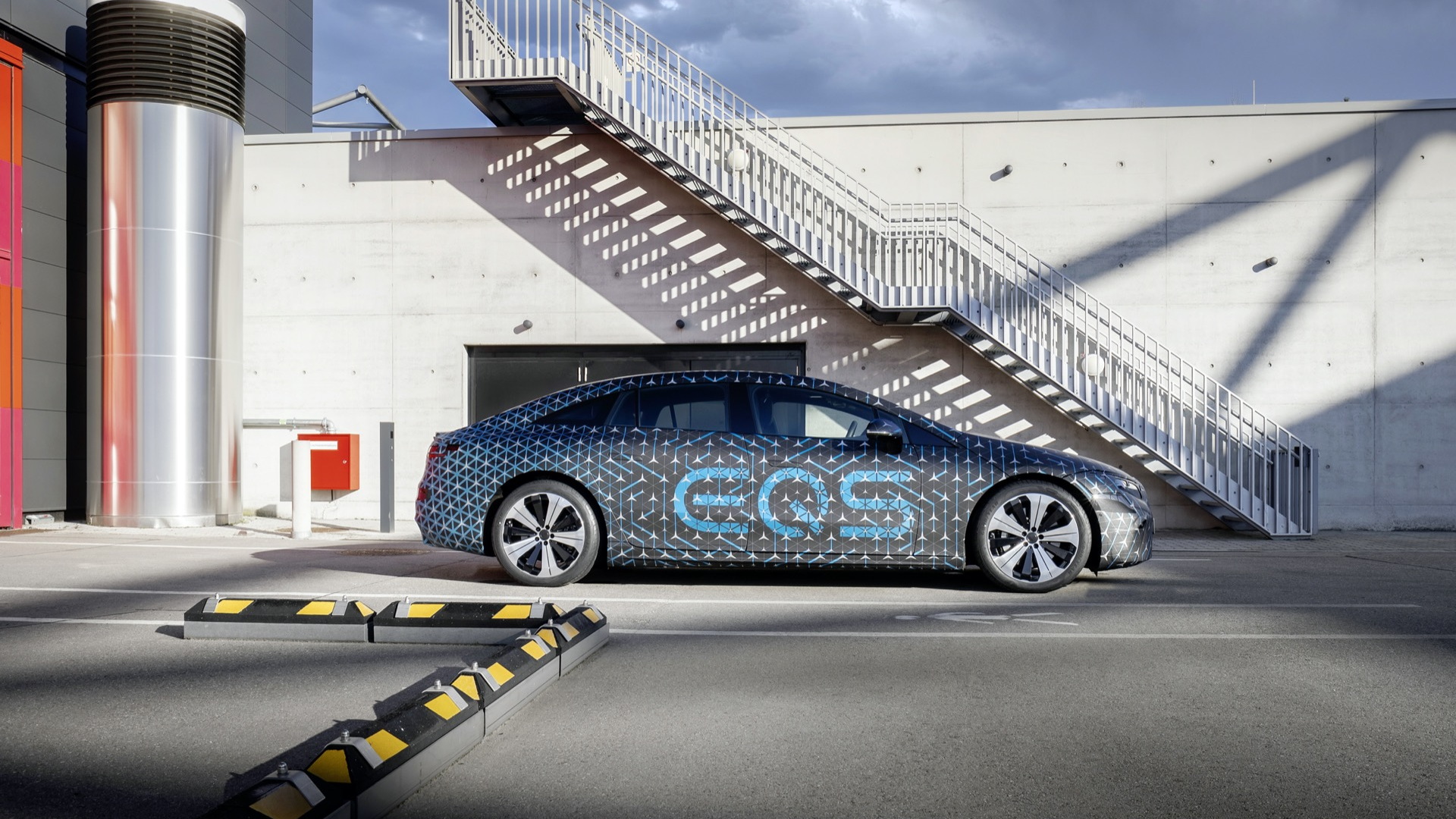 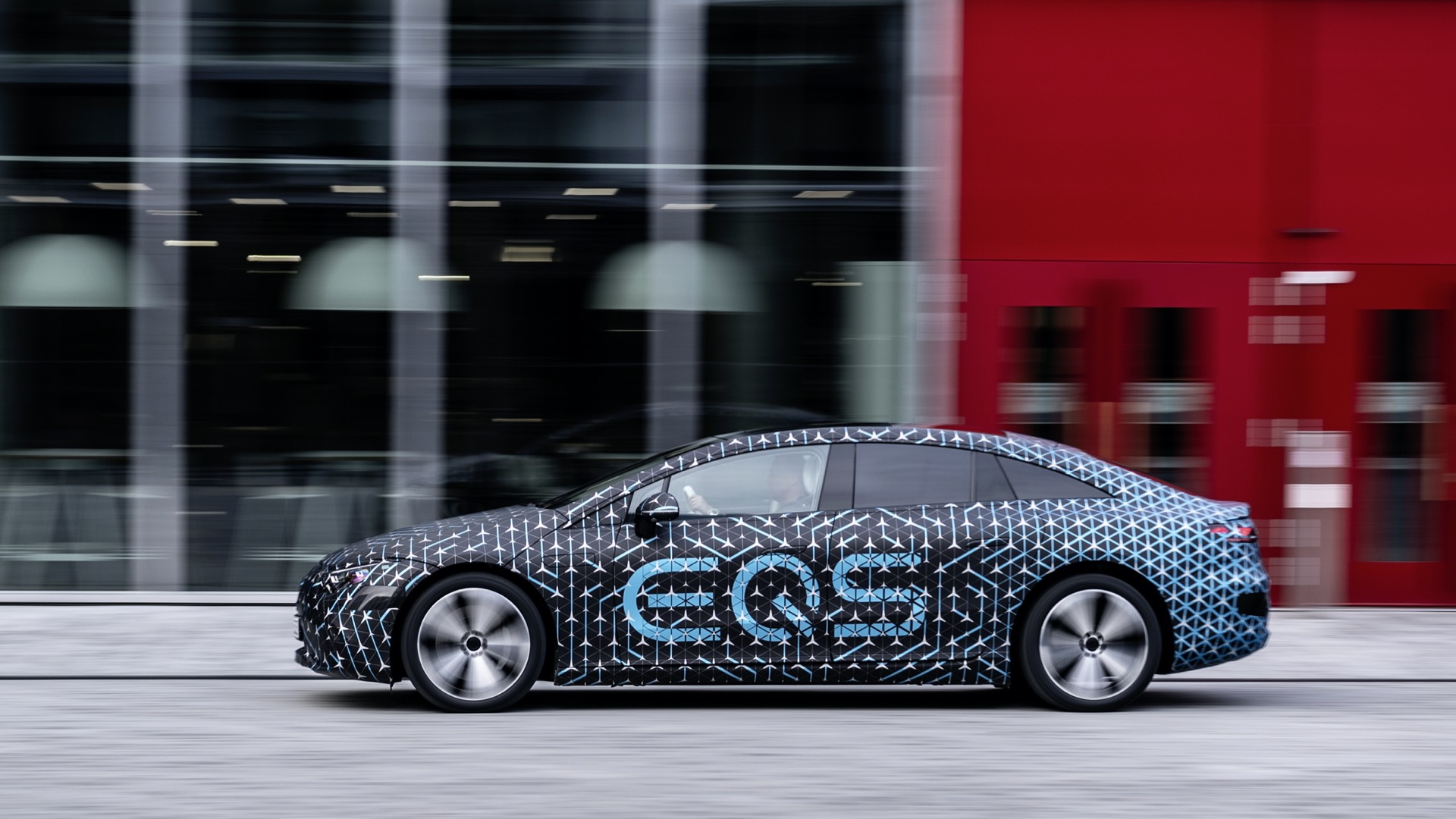 It’s been nearly nine years since the first delivery of the Tesla Model S and, love it or not, it’s a template that the 2022 Mercedes EQS has to stand up to.

As the first true Model S alternative—roughly the same size, but with more cab-forward luxury, Mercedes went a long way in cementing the impression that it’s going to completely reposition the German automaker with respect to EVs.

Earlier in the week Daimler surprised us by revising its estimated range for the EQS, at 478 miles in the European WLTP test. That may result in a range of 450 miles or more in an EPA rating, which we eagerly await.

Although Mercedes hasn’t revealed the EQS yet, and its production exterior and some feature details are officially under wraps until its April 15 debut, Green Car Reports was able to sneak a few detail questions into a 25-minute “ride-around” held earlier this week, with Fabian Wuttke, Mercedes’ project lead for sedan development.

Here are 12 things you might not yet know about the EQS:

It’s a liftback. The EQS concept car was a hatchback/liftback, and since then Mercedes-Benz has referred to the EQS as a sedan—which can be a bit confusing. Wuttke confirmed that there will be an impressive cargo opening and that the rear seats fold forward. It’s like nothing else in the automaker’s lineup.

Yes, of course range was an emphasis. It was especially important here “because it’s the first of its kind and we want to have a statement,” Wuttke said. It includes an industry-best 0.20 coefficient of drag with "a very sophisticated management of the low-voltage/high-voltage consumers here on-board," he said, also pointing to "ultra-efficient tires." The automaker is rating the battery a net/usable 107.8 kwh, and gross capacity is “a little bit over 110 kwh,” which says that yes, they do have a lot of confidence in both the cells and the BMS.

Single- and dual-motor. A rear-motor (rear-wheel-drive) version will have 245 kw of power, while dual-motor (all-wheel-drive) variants will make up to 385 kw, with a combined 828 Nm of torque.

Four regen options, including one-pedal. The EQS has essentially the same interface for regenerative braking as the EQC SUV, but with some minor evolution. A “D Auto” mode combines the assistance systems in the car, plus navigation info, automatically helping to adjust the speed. Or three different normal modes put it all in your control. The “D” normal mode has light recuperation; “D-” recuperates up to 110-kw ceiling, “where we really recuperate at a high rate and can really bring the car to a stop,” confirmed Wuttke. “D+” is the coasting, or "sailing" mode, where the car is essentially staying at the same speed. And yes, you can turn creep on or off.

The EQS can charge with the same power as peak regen. It's 200 kw in both cases. Many EV makers limit peak charge power to a certain amount below peak regen power—mostly because it’s more of a constant load. The 200-kw charge rate is higher than any other 400V EV, Tesla aside.

It’s very quiet inside. This shouldn’t come as that much of a surprise. It’s the first production car ever to reach a coefficient of drag of 0.20. “We addressed that really early in the whole development phase. We wanted the car to be silent. The motors are isolated, and they have their own sound insulation. That’s in addition to additional sound insulation throughout the body.

You log in with a fingerprint sensor. It’s how the Hyperscreen system recognizes you and keeps each of its seven profiles distinct. There are separate profiles available for the passenger as well but they don’t get the fingerprint thing.

Reinventing the screens but not the driving interface. While there’s been much ado about Mercedes’ Hyperscreen system, with its two 12.3-inch displays, one for the instrument cluster and one for the front passenger, a central 17.7-inch display, and AI smarts to anticipate what you’ll want to do next, not much has yet been said about driving modes. Thankfully that’s essentially carried over from Mercedes’ other vehicles. Via the same Dynamic Select switch you can opt for different eco, comfort, and sport drive modes for the damping and steering, or individual settings.

Power doors front and rear. The EQS one-ups the S-Class's available power-closing doors with something even better: All four doors can open and close automatically, and you can activate that via a central display. As you approach the car, the driver door can automatically open. Via a screen selection or a push of the brake pedal, the door will close behind you.

Good things shared with S-Class. The EQS was designed on its own EVA platform in a way such that some things could be carried over from the S-Class. The whole driving system with air damping is borrowed from the S-Class. As is the automatic parking system. And the rear-axle steering with up to 10 degrees of steering, permits the big sedan to have a 35.8-foot turning circle—about the same as a compact car.