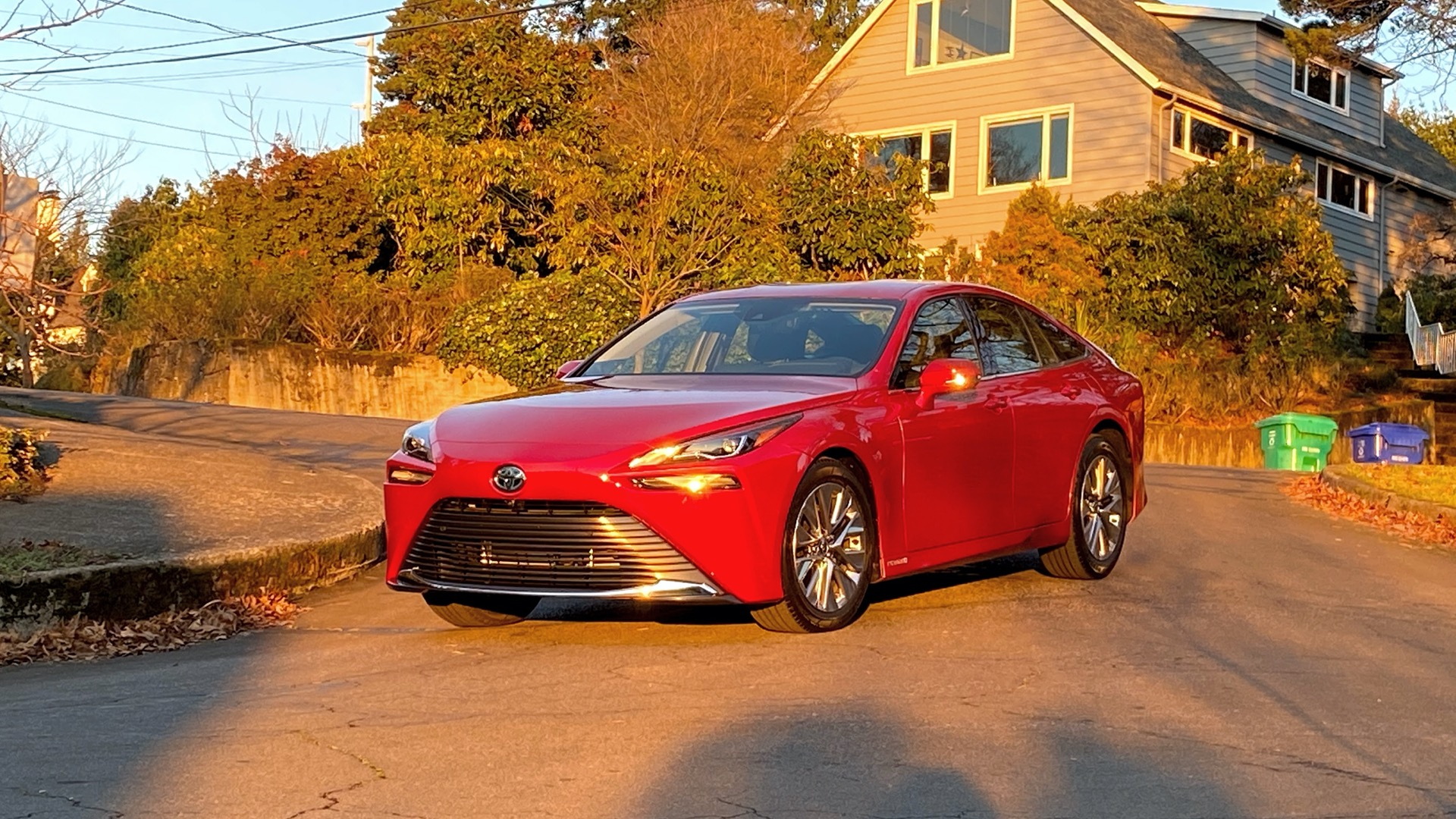 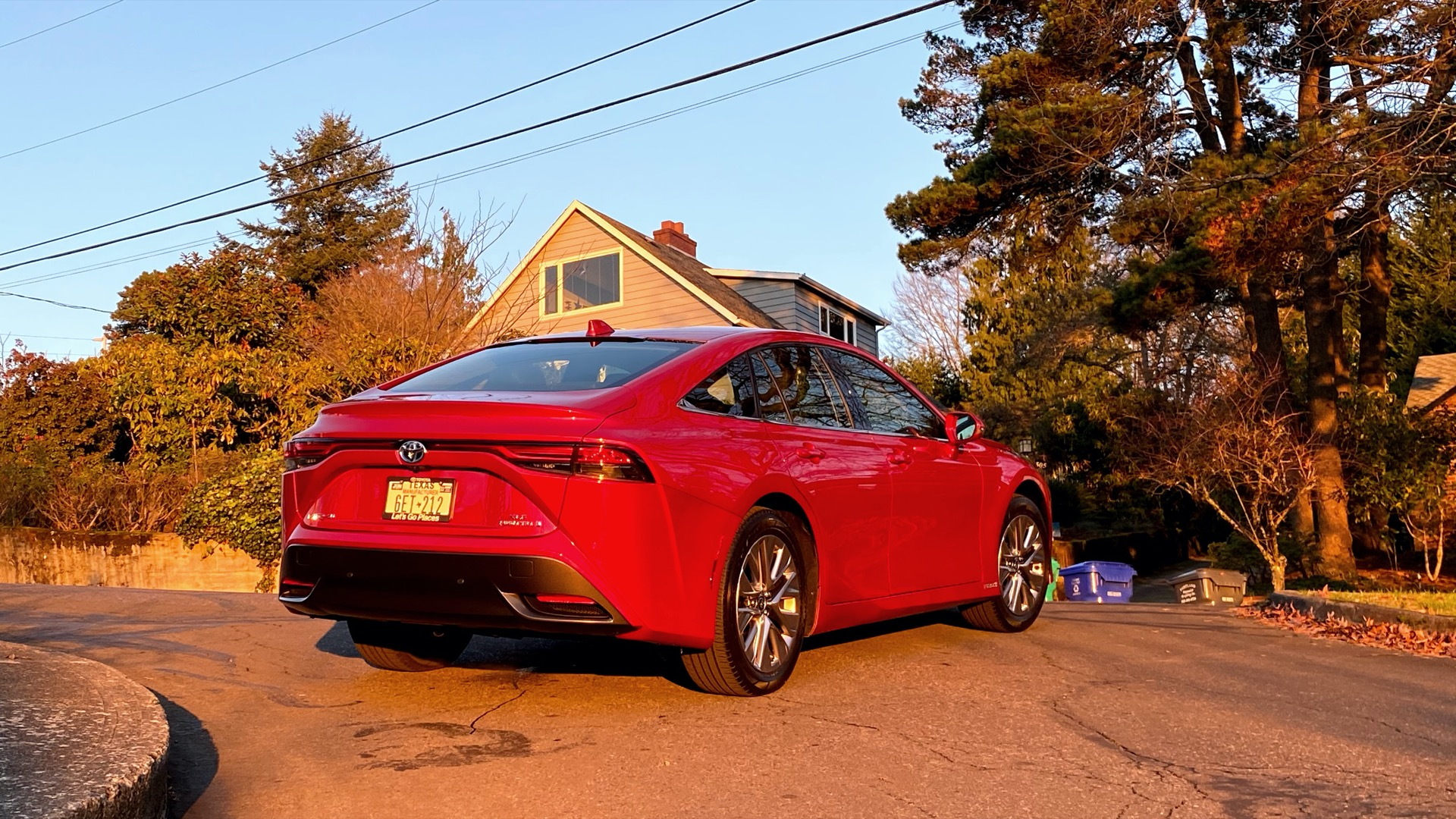 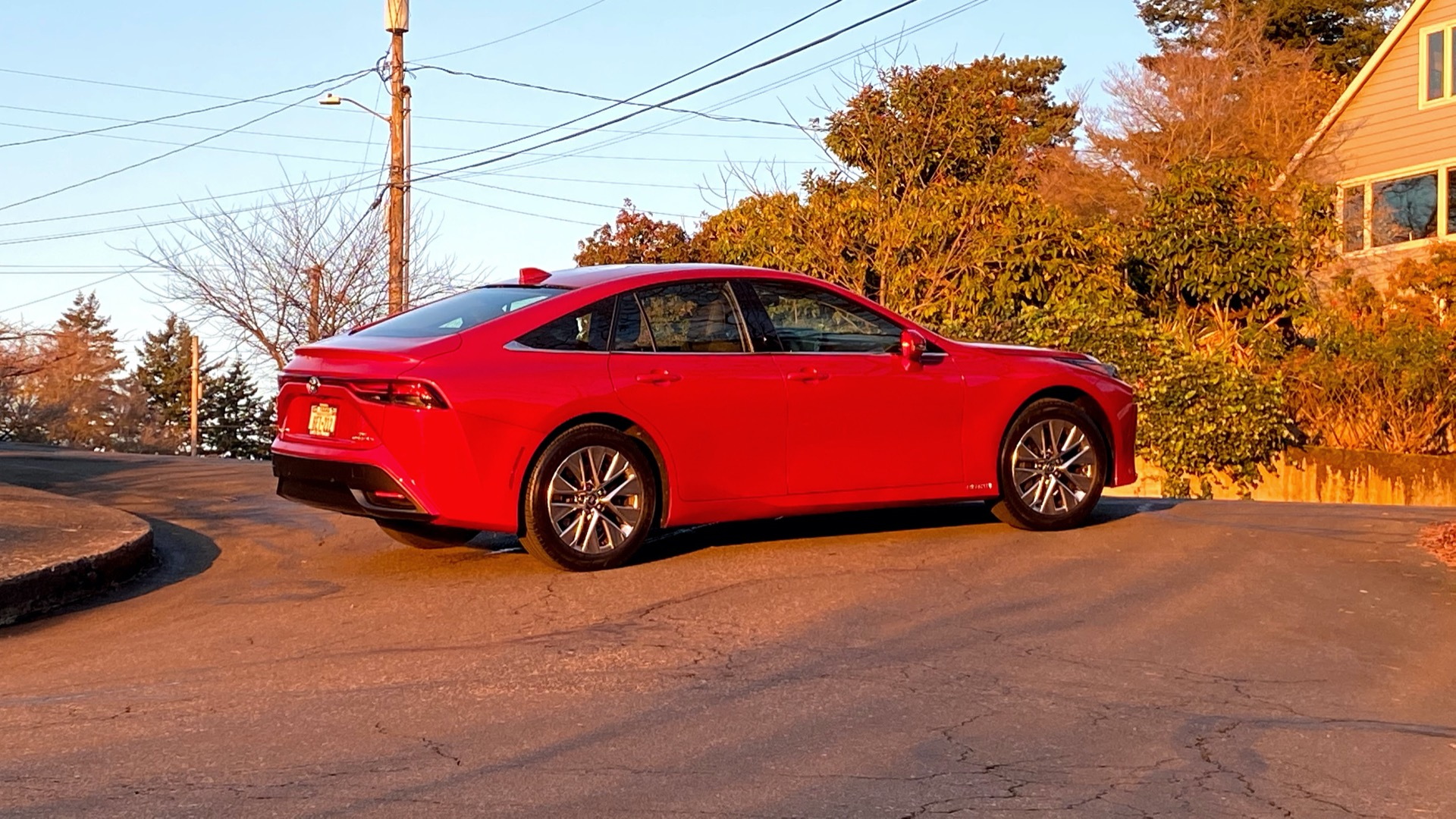 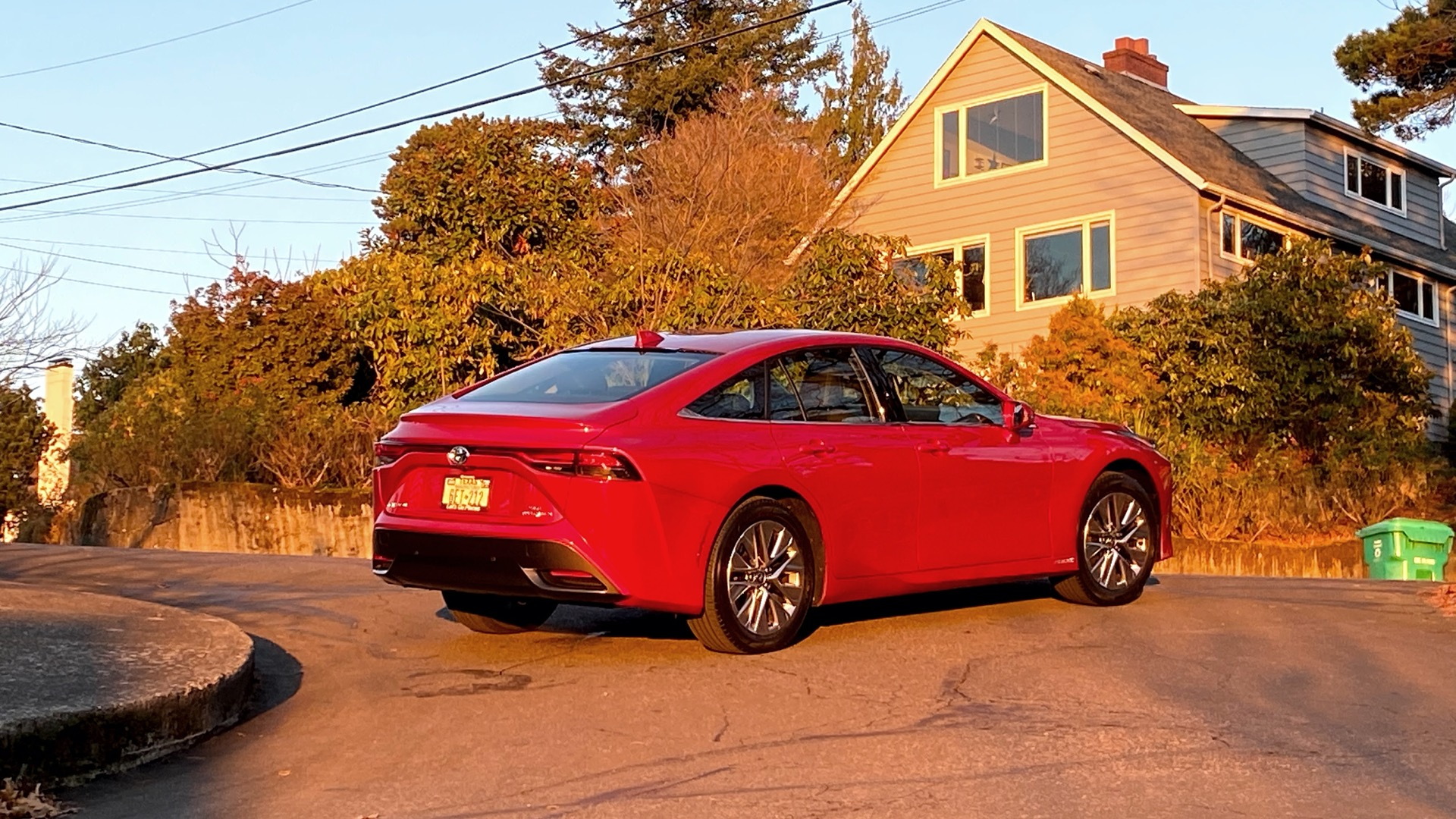 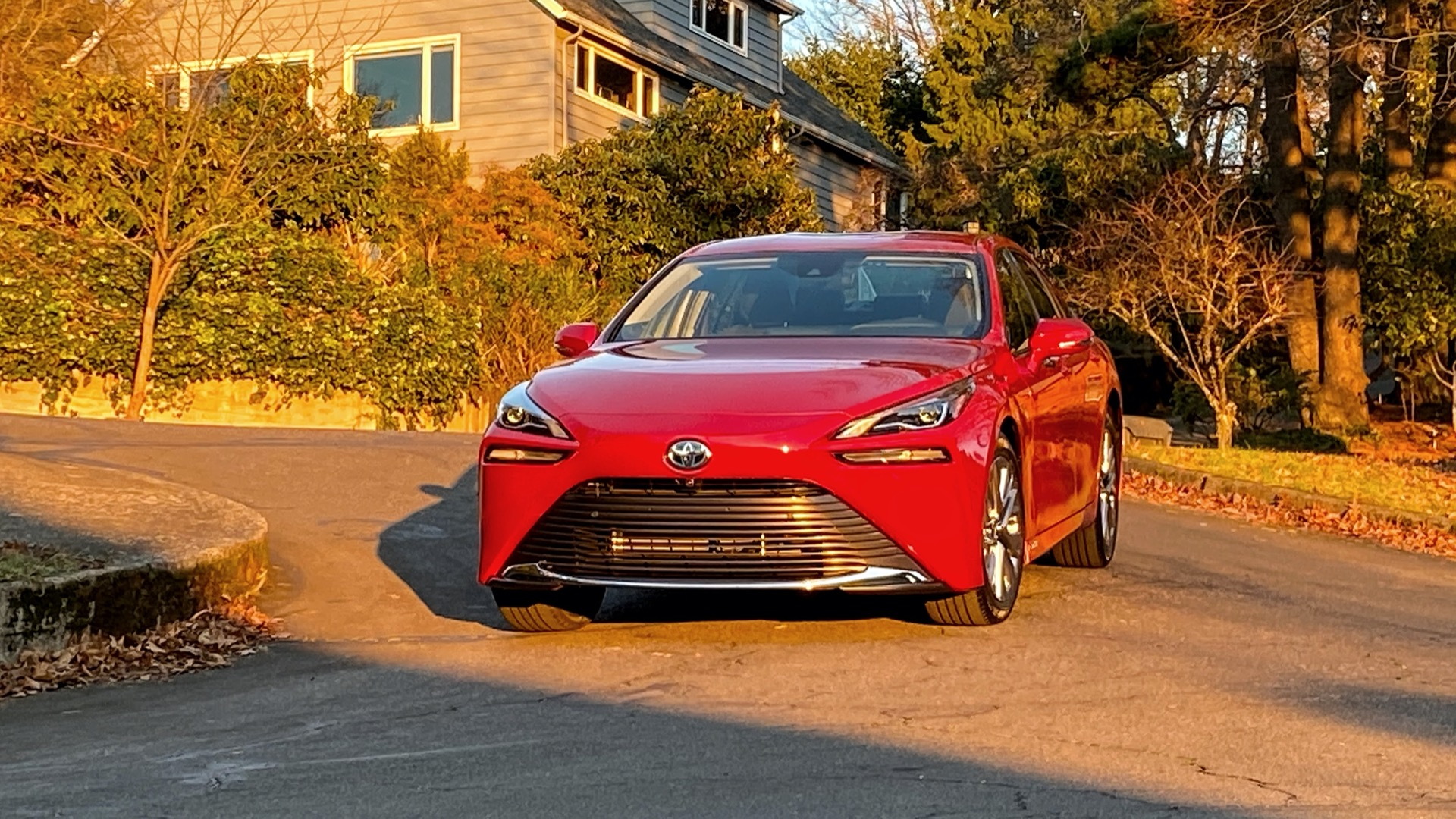 The 2021 Toyota Mirai I drove a few weeks ago adds to the hydrogen conundrum of the past several years—that there can exist some truly great-driving vehicles available in a small region in only one state. Yes, California and its 44 or so hydrogen stations.

As the Mirai was heading away from Portland on a truck, in search of more high-pressure hydrogen that was perhaps hundreds of miles away, I attempted to digest the inspiring hydrogen-powered car and the best-driving sedan in Toyota’s lineup—framed against the infrastructure that almost isn’t.

My mind strayed to the conversation I had with chief engineer Yoshikazu Tanaka more than a year ago. Tanaka summed up the mission behind the whole project with: “Within the limitations of the refueling structure… how appealing of a car could we create?”

Tanaka-san promised a good-looking, sportier driving Mirai that also would have the “the wow factor” of a 400+ mile range, and he delivered on all of those goals. And the only things that didn’t add appeal have everything to do with the more awkward way that hydrogen has to be stored—in cylindrical tanks, in a cumbersome ‘T’ shape.

With the two new battery electric vehicles now confirmed as headed to the U.S. later this year, it’s easy to see a little more of Toyota’s future in the Mirai—not specifically in the Mirai's platform, but in the choices it's made around everything electric, downstream of the fuel cell.

The name “mirai” means “future,” and here it rings true in multiple ways. Toyota might see hydrogen fuel cells as part of future mobility, in many respects, but the reality is that a limited infrastructure and the costs of supporting it will remain issues for many years—as will the issues around procuring truly “green” hydrogen without added carbon baggage. At the same time, many of the core components in a fuel-cell vehicle—outside of the hydrogen and fuel-cell stack—closely parallel what might be used in EVs, big battery aside.

The best-driving fuel-cell car yet?

The Mirai is a fantastic drive—something I sure wouldn’t and haven’t said about the Prius-like first-generation model. The 2021 Mirai isn’t sport-sedan quick, with a 0-60 mph time of about 9 seconds; but its ride is firm and refined, its handling and body control are balanced, and a precise feel governs everything from steering precision to tracking and accelerator inputs.

The zero-latency feel to any accelerator-pedal inputs makes it feel like a much quicker car than it is below about 50 mph.

It’s sporty on the outside, mature and refined inside, and playful when you want it to be. It could serve as a template showing that Toyota can make a compelling battery-electric model that won’t be shoehorned into eco-geek cliches.

The 2021 Toyota Mirai is powered by a single electric motor at the rear wheels, making 182 horsepower and 221 pound-feet of torque, while a new, more compact generation of Toyota’s fuel-cell stack makes 172 hp and keeps the power flowing at varying rates—with a 1.2-kwh lithium-ion battery pack acting as the buffer and booster when more power is suddenly needed.

Part of what helps give the Mirai its vivid feel despite the lack of serious firepower is that it’s a big sedan—the size of the Tesla Model S—and yet it weighs 4,300 pounds, compared to about 5,000 for the Model S.

Reality check on the real-world usability

There’s one serious disappointment in the Mirai, though, and that’s its lack of interior space and cargo space. Yes, it has a long hood and a low roofline, but psychologically it’s a tough sell that a sedan so large on the outside can have so little space—headroom especially—in the back seat. It’s a no-go even for six-footers. Trunk space is just 9.6 cubic feet. There’s no flipping forward the rear seatbacks; no frunk either.

That’s because the fuel-cell stack is packed under the hood—with its own crash structure—while this time around, the Mirai has three hydrogen tanks. Two of those tanks are transverse, under and behind the rear seat (with the battery pack also in the vicinity), while the other is longitudinal, along what would be the drive tunnel in a gasoline rear-drive car.

Toyota has no intent to use the Mirai’s platform for an electric car, but when its EVs do arrive, things will be different with the flexibility of battery packaging under the floor.

Although Toyota took a step back from the sci-fi look and Prius nods of the previous Mirai, it didn’t do as much as it could to clean up the interface, and—outside of the interface to show how it’s cleaning the air—to simply show what the sophisticated powertrain is doing energy-wise. The infotainment system itself feels confusing and obtuse, with multiple ways to get to unintuitive submenus.

My test car, for instance, was showing a 49 MPGe tank average. I had covered about 60 miles—a wildly varied mix of sporty driving plus some calm cruising—and even though the Mirai carries a range rating of 402 miles the trip computer seemed to think that a full tank of 5.6 kg of hydrogen would equate to something just over 200 miles of range.

It’s also totally ridiculous that the driver of a vehicle that’s fueled with hydrogen and uses electric motors and kilowatts for propulsion would want to convert its efficiency to miles per gallon equivalent—or find MPGe useful in any way.

Just like its predecessor, the Mirai will essentially produce water on command—purging its fuel cell with a sudden burst of water out the tailpipe. No, it’s not quite potable, as years of fuel-cell presentations might have suggested, but it’s a party trick. And if you don’t purge along the way, the Mirai will essentially do so when you shut down the car—producing billowing steamy clouds at the 45-degree F temperatures at which I drove the Mirai.

The Mirai also has the capability to proactively dump its fuel—fast. The T-shaped array of three hydrogen tanks has pyrotechnic devices that very quickly open valves to vacate the hydrogen in a collision.

Looking beyond the Mirai, to the mirai

While those elements aren’t going to translate to a battery electric vehicle, plenty of goodness from the Mirai could. For instance, it’s built to produce backup DC power. While it didn’t appear that my test car had this, it’s mentioned in Toyota’s international brochures for the Mirai, and its tanks of hydrogen could power a house for days.

Likewise, the fuel cell boost converter that controls fuel cell output and boosts voltage for the high-voltage drive system is something with technology expertise overlapping to EVs and the high-efficiency inverters required to get a lot of range and efficiency out of battery packs. This is Toyota’s first use of power MOS transistors, which use next-generation silicon carbide semiconductor material.

I’ll place my bets on some of this technology also arriving in Toyota’s yet-to-be-detailed e-TNGA platform for dedicated EVs. As the Mirai shows, sometimes just sketching out one future shows us that another one is just around the corner.