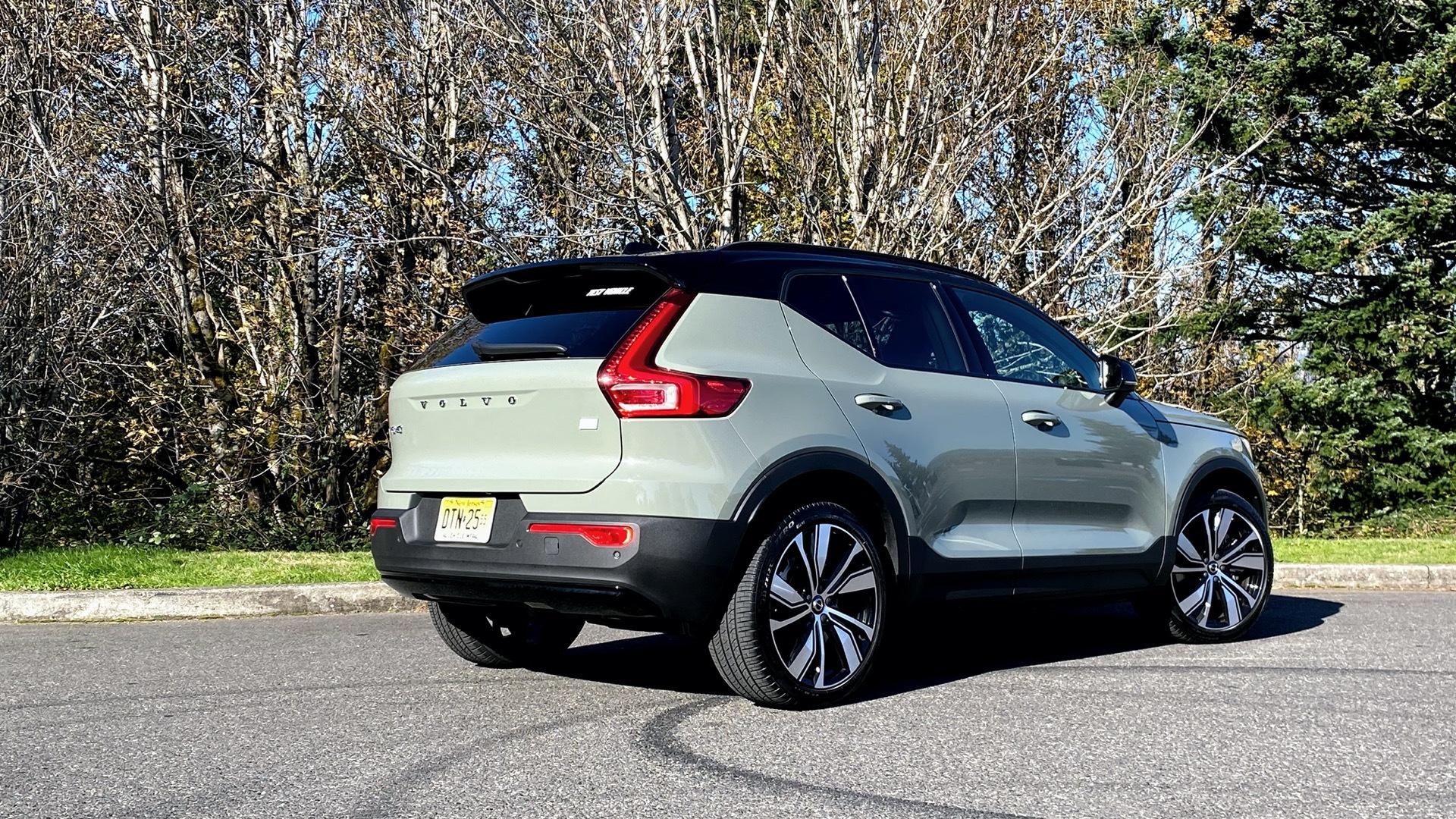 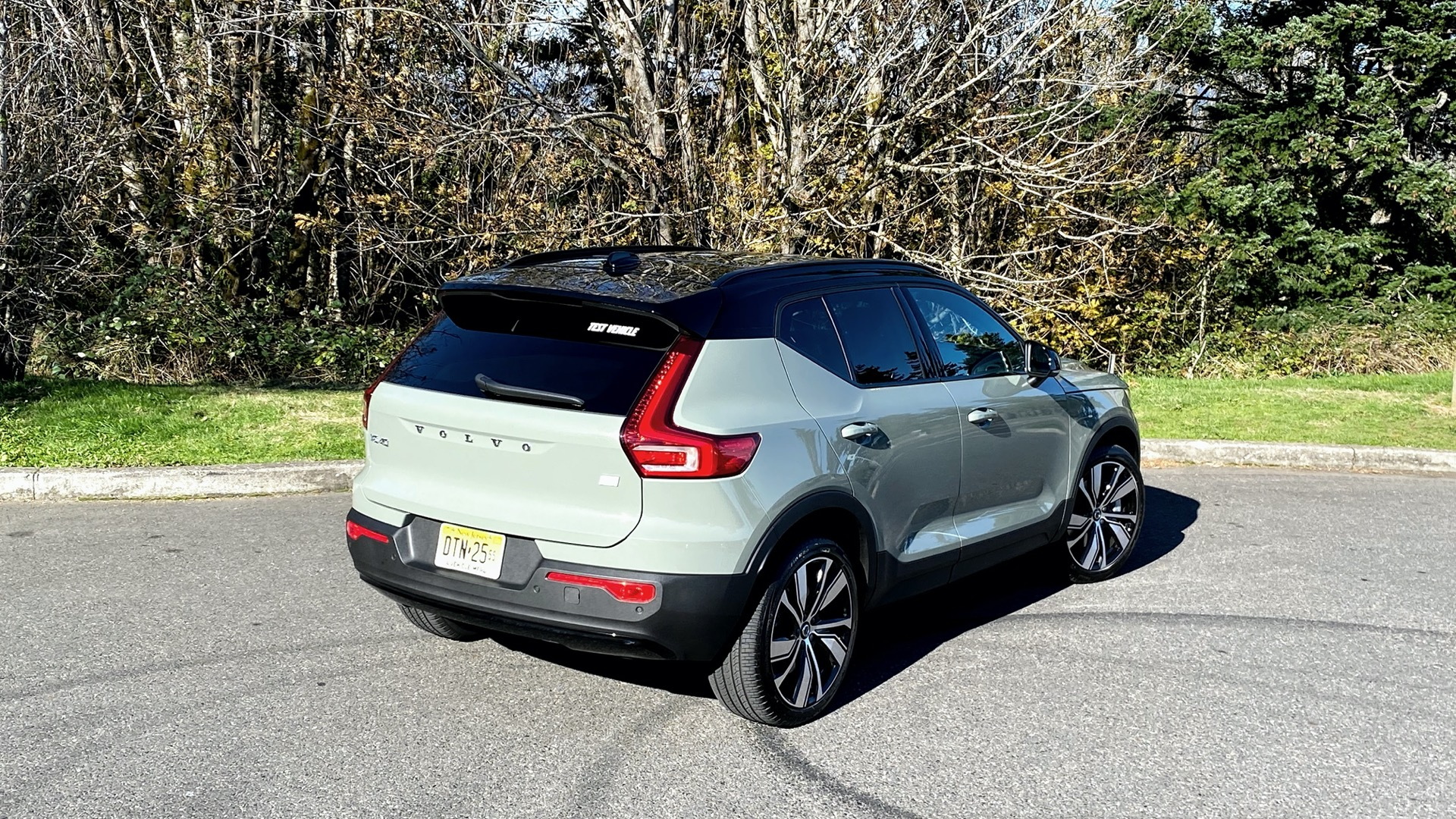 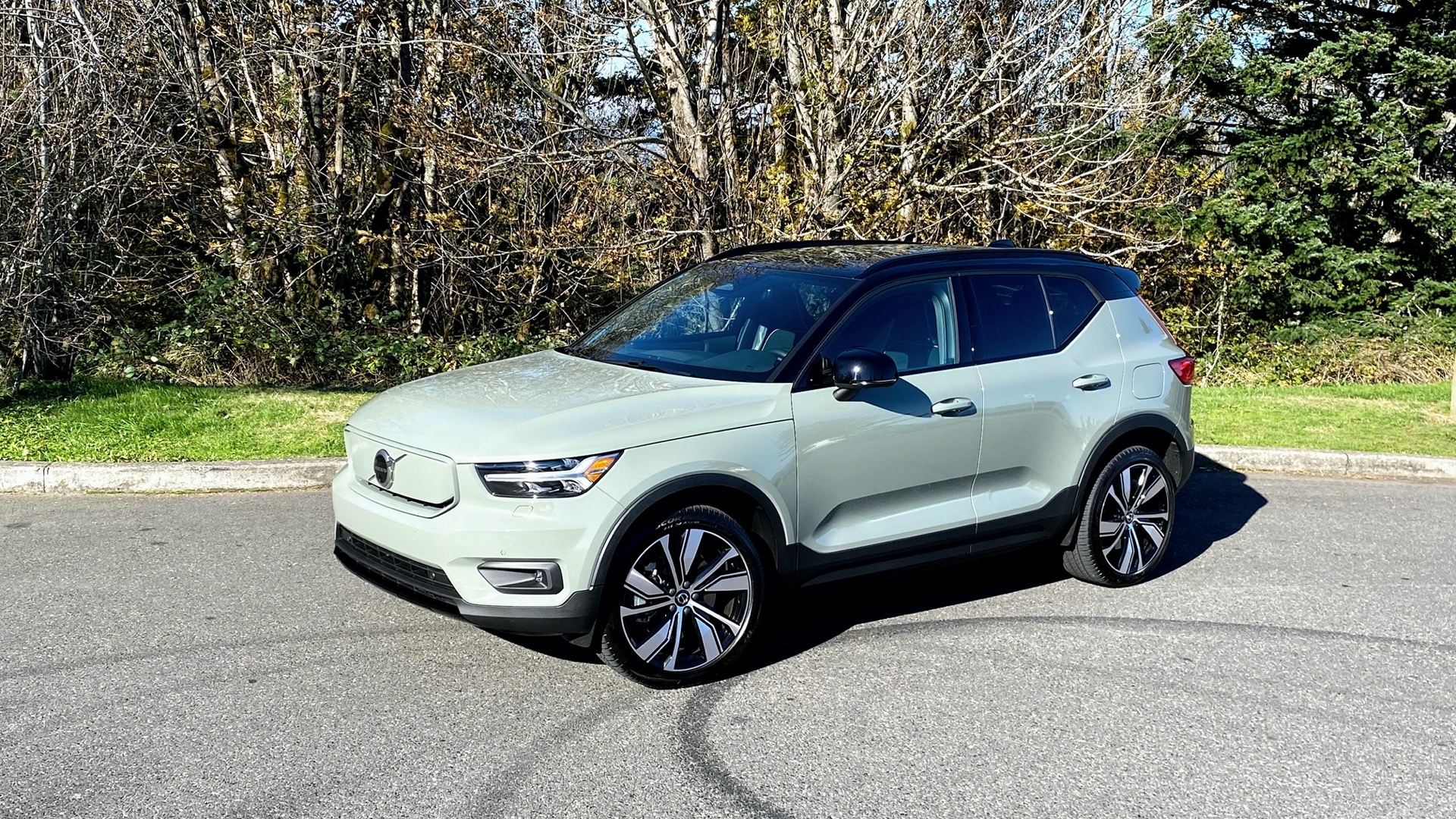 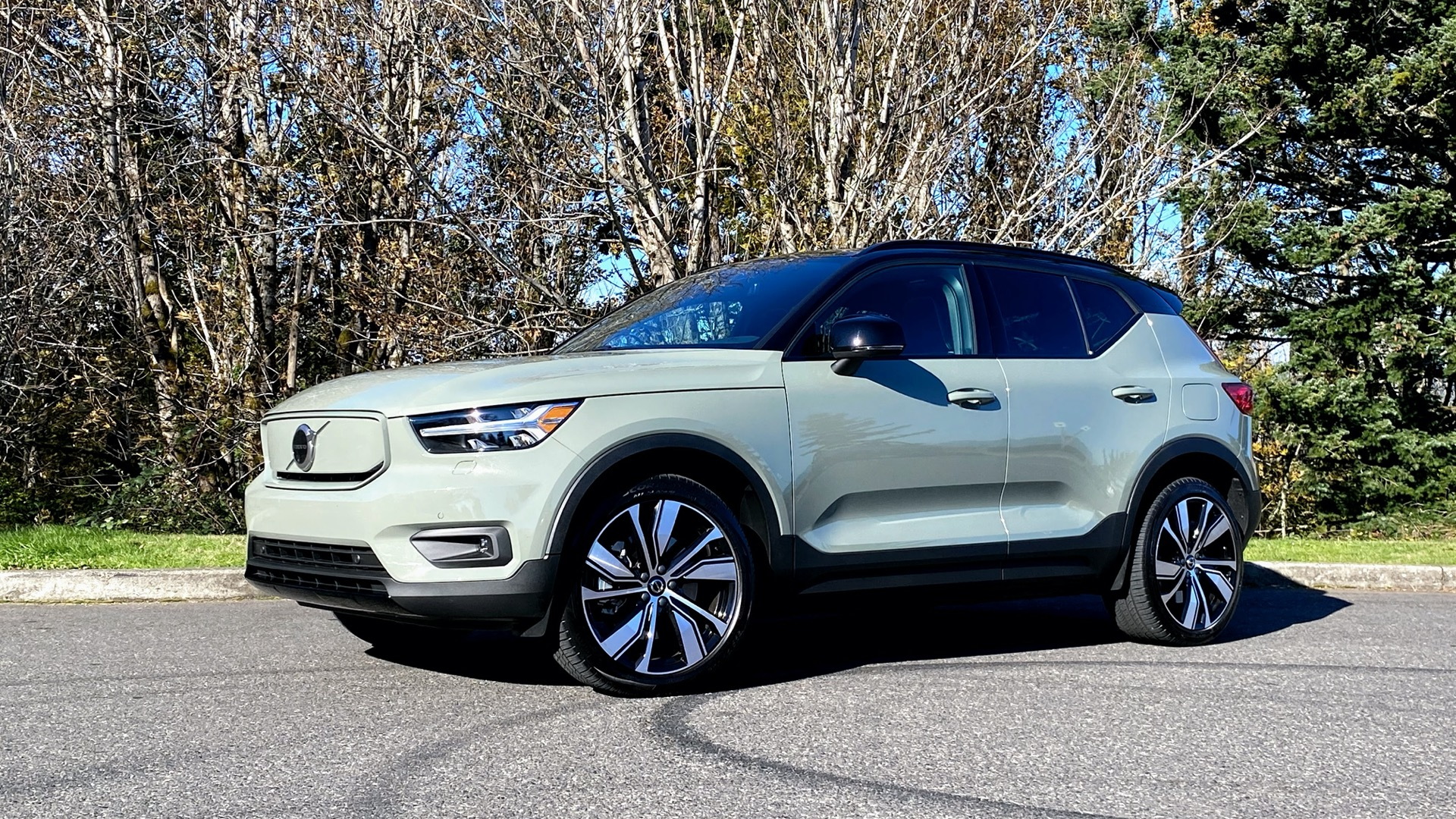 After a very short drive of the Swedish automaker’s first fully electric production model earlier this month, I found it’s a lasting impression that rings true in the driving experience and the overall ambience of the vehicle.

The 2021 XC40 Recharge sets the interface and user experience for a generation of other Volvo EVs to be offered over this next decade—and here, that's a minimalist-luxury approach that pushes the clutter (and noise) out of the way, and promises just the right amount of choice.

Volvo arranged for me to have exactly one hour behind the wheel of one of just a half-dozen or so pre-production prototypes so far in the U.S. In that time I was able to fit 40 miles of driving, fold some seats, pop the hood, and snap some quick photos.

The XC40 Recharge is set to arrive to U.S. dealerships in January 2021, starting at $54,895 (not counting eligibility for incentives like the $7,500 federal EV tax credit).It’s at the small end of a class of crossovers that are called compact by American standards but can serve as full-fledged family vehicles if there isn’t too much gear to take along.

In between, by American standards

At about 174 inches long, on a wheelbase of 106.4 inches, it’s about a foot shorter overall and 7 inches shorter in wheelbase than the Tesla Model Y and Mustang Mach-E, and while seating space for four doesn’t feel dramatically different, the Recharge clearly has a lot less cargo space. The model it most closely compares to in dimensions is the Kia Niro EV, although the Volvo is taller both cabin-wise and overall.

The Recharge has excellent, thigh-extending, back-supporting front seats. Back-seat accommodations are well-apportioned, too, with plenty of head room and no lack of space to tuck your feet under the front seat—although there’s a rather high, squared-off hump in the middle of the floor that soundly makes the middle position a lot less usable for all but kids. It’s the price of the Recharge’s adapted platform and T-shaped battery pack, running through what might otherwise be a drive tunnel.

The XC40 Recharge does have a frunk, and it’s not as large as those in the Ford Mustang Mach-E or Tesla Model Y but large enough for a couple of small backpacks or a larger duffel bag.

At the reveal of the XC40 Recharge, in October 2019, Volvo wasn’t yet ready to discuss the driver interface. After sitting down in the vehicle, it’s clear that some aspects of it have changed since I first sat in the show car.

Just as in the Polestar 2, there’s no start button. You just sit down in the driver’s seat—with the keyfob in the car—and with your foot on the brake, you toggle it into gear and the car seemingly comes to life. A choice of three different gauge displays let you choose from Car Centric (showing you power/regen readouts, and the most information), Navi (bringing the map into the central readout), or Calm (minimal) on a large reconfigurable screen that replaces a traditional gauge cluster.

The XC40 Recharge is one of the first models in the world to run on Android Automotive OS, which claims full integration with Google Maps and the Google Assistant plus a broader range of apps compared to previous versions offered in Volvo infotainment systems.

One pedal at a time

Every electric car has its own special personality largely based on how it carries momentum and how the regenerative braking reacts to inputs of the accelerator and brake, so getting a feel for that was a priority in this short spin.

The XC40 Recharge offers a single option for how this is handled—an all-in-one setting called “one-pedal driving” that can simply be toggled on or off. Without that mode, the Recharge “creeps” forward gently when you lift your foot off the brake pedal, and it decelerates gently when you lift off the accelerator—basically mimicking the behavior you’d find in a gasoline vehicle, only perkier and more consistent.

Toggle “one-pedal driving,” and the behavior swings in a different direction. Lifting off the brake pedal doesn’t create any forward motion; you need to tip into the accelerator for that. And any lift of the accelerator pedal brings on the regenerative braking quite abruptly, letting you slow moderately to a complete stop if you wish, followed a short time later by the faint whir of the parking brake to make sure you don’t drift backward.

There are no steering-wheel paddles or other ways of adjusting the regen. Only when aiming to keep a steady speed on a steep downhill did I miss a middle setting between the standard mode, which required dabbing the brake pedal, and the one-pedal mode, which required feathering the accelerator.

In one-pedal mode, the brake pedal feels firmer than it does in the standard mode; that’s largely because, as Volvo confirmed, in that mode there’s no additional blending-in of regen from the motor as you press the brake pedal—Tesla-style. In its default mode, the regen is blended with the friction brakes.

Volvo also confirmed something I couldn’t adequately get a feel for on my drive: The accelerator calibration is somewhat sharper in the standard mode, and more linear in one-pedal—likely to help reduce the amount of head-toss for your passenger in one-pedal mode.

Outside of that, your other dynamic choice is whether to engage “steering wheel firm.” After some quick A/B testing, I found it unwound more neatly in the lighter setting, though some might find the firmer mode more engaging. I also came to the conclusion that having “firm” mode on makes the steering feel heavy but not any more precise—and counterintuitively, slightly less relaxed on center. Easy decision which one I’d always use.

Buttoned down, but no ballerina

The Recharge has a front strut, rear multi-link suspension, with stabilizer bars front and rear, and it goes without the likes of an air suspension or variable damping. The Recharge rides a lot stiffer than I was anticipating from my experience with other recent Volvo models (and the gasoline XC40). That can bring a little more coarseness in from outside, but it excels in keeping nosedive, pitch, and lean at a minimum. Although you sit high in the Recharge, there isn’t the level of fore-aft body motion that can make the ride of some tall-riding but short crossovers feel unsettled.

The underlying firmness, and neat-handling first impressions emboldened me to take it on one of my standard testing roads—a steep, sharply curved mountain road with imperfect surfaces and banking—at a rapid pace, but  the shrieking of the front tires revealed the Recharge’s 4,800-pound curb weight. This is not a machine that will be pulling high Gs on the skidpad.

I did one flat-out acceleration run up to 70 mph or a little beyond (on the advice of Volvo’s 4.7-second 0-60 mph time), and the Recharge leaps forward with quiet confidence; you sit fairly high, so it tends to feel even a tick faster than it is. The Recharge makes a combined 402 horsepower and 486 pound-feet of torque from front and rear motors, delivering “constant AWD” with a 50/50 torque split by default, but it can shift torque for the best traction.

As good as the Recharge was in sorting out its traction off the mark, on a steep uphill, sudden prods of the accelerator produced momentary front wheelspin like a front-wheel-drive car, resisting (at least for a long fraction of a second) the idea of putting full power only to the rear wheels. This felt like a matter of programming—yet to be done, perhaps?

Range results from this short drive were promising—if you consider the context. The official EPA range of the XC40 Recharge is 208 miles. I went 39.6 miles, and the state of charge dropped from 83% to 61%, with the trip computer indicating an average of 40.0 kwh/100 miles, or 2.5 miles per kwh. Given a usable battery capacity of 75 kwh (78 kwh gross), that puts us at a maximum range of roughly 185 miles based on the kind of driving I was doing.

About 30 of those were miles on the Interstate, aiming for typical travel speeds and mostly cruising at steady speed—where the Recharge proved well-blanketed from road and wind noise. The remaining 10 miles was split between urban surface streets, at 20-35 mph, and on a steep up-and-down curvy backroad. For most of the drive I kept the climate control set to 72 degrees F, and the outside temperature was a mild 63 degrees.

I suspect the efficiency readouts were the consequence of the widely varied driving style as I was trying to get a feel for the vehicle and its capabilities in a one-hour snapshot.

Green Car Reports anticipates getting a more balanced impression of the XC40 Recharge and its real-world efficiency, charging ease, and many connectivity features. Look for that in the next couple of months.

Until then, I can say that the XC40 Recharge is in a very smart position—not so much to woo Tesla drivers, but to show that Volvo can be everything it’s been and more in a fully electric model. It’s a big leap for some families, but I can already tell that this one’s going to make those trendsetters feel at ease.