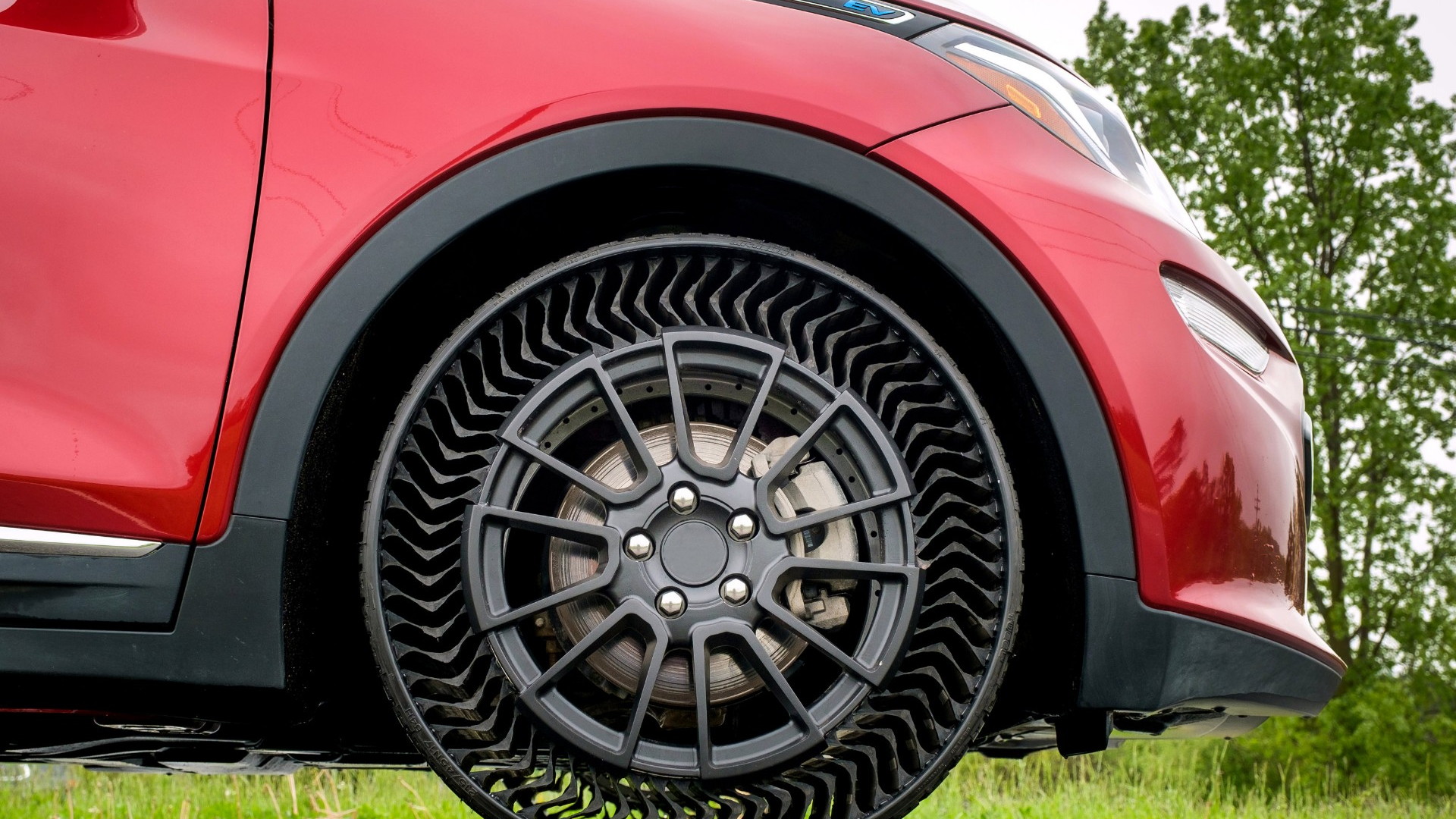 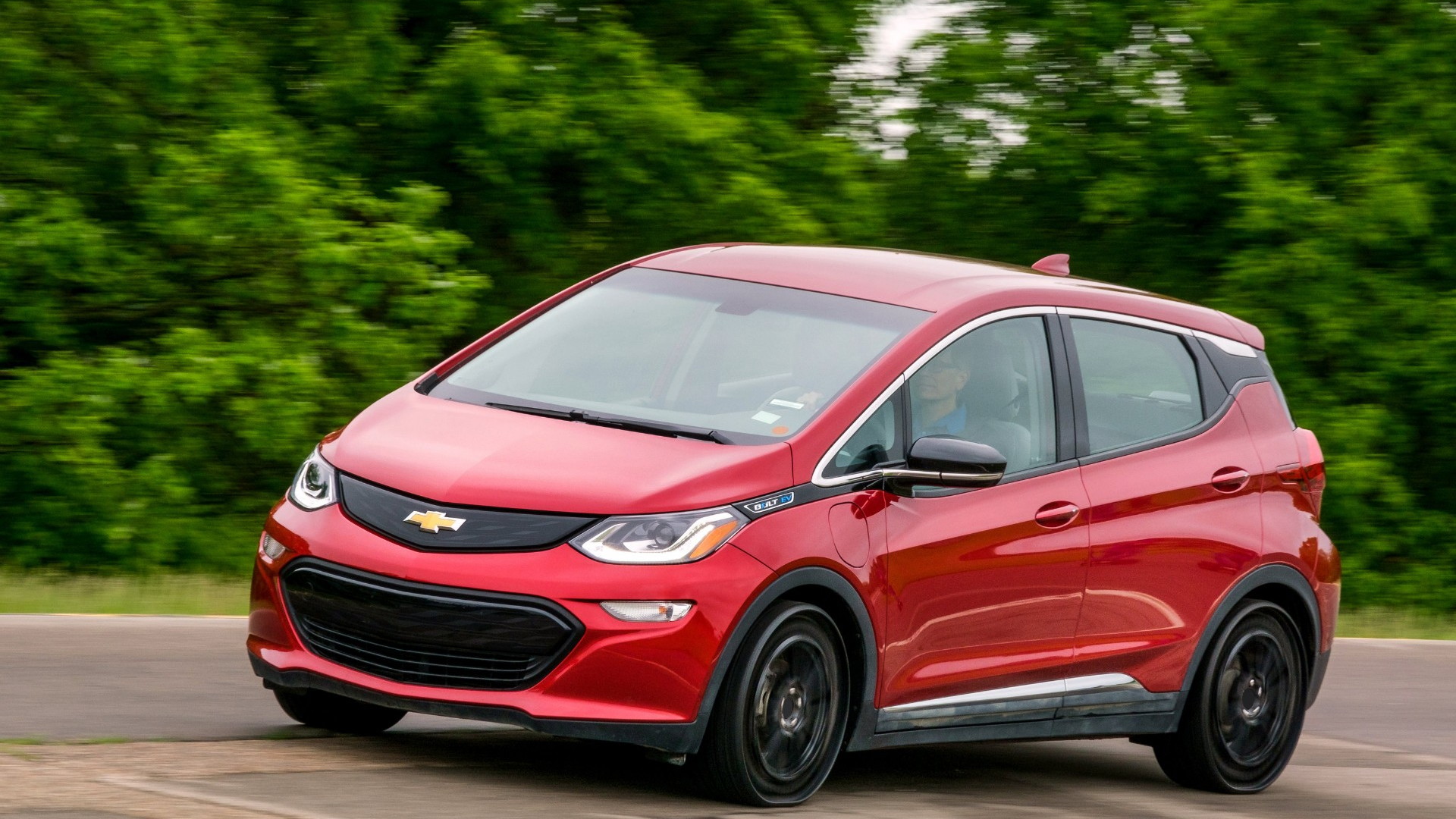 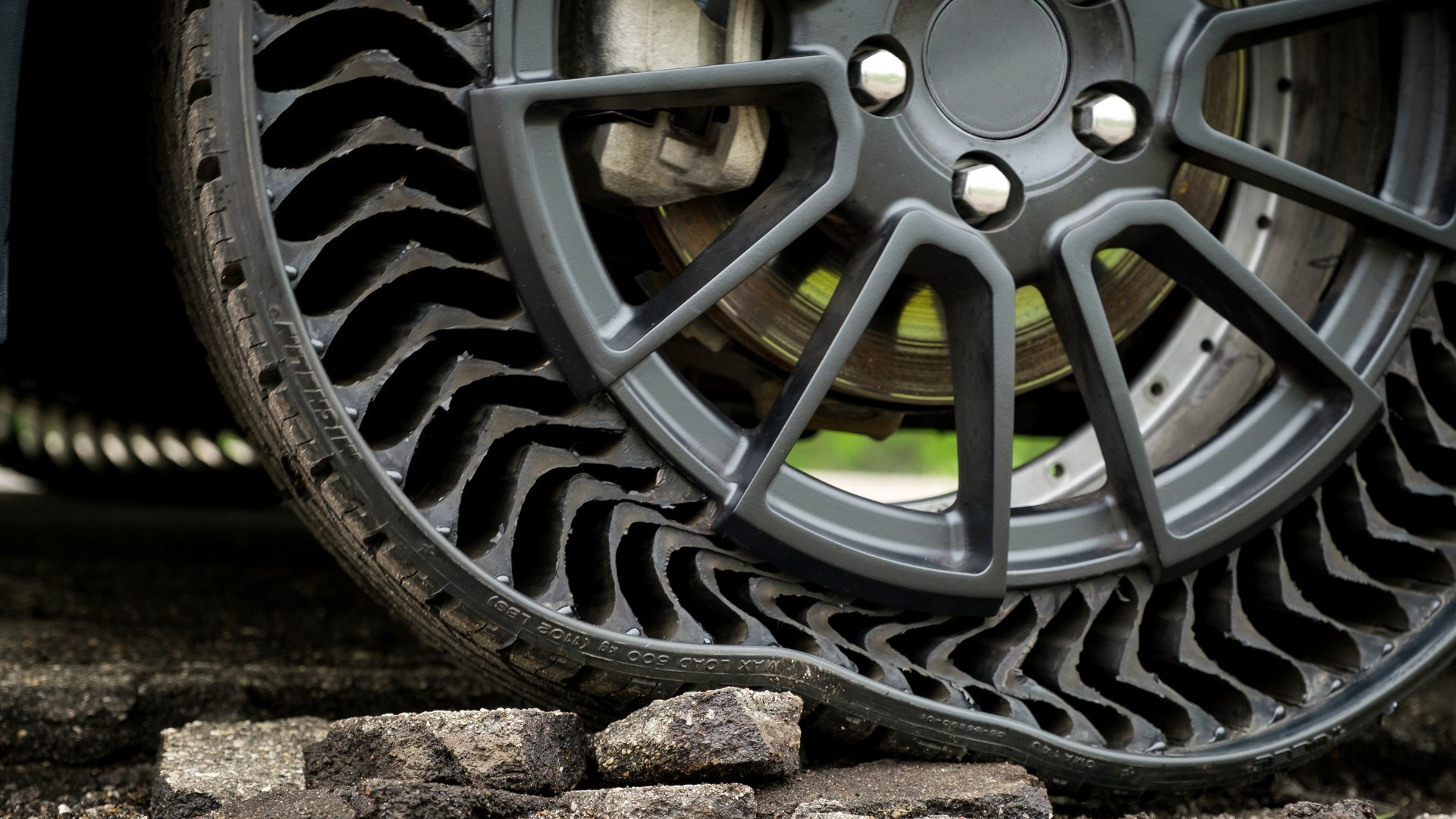 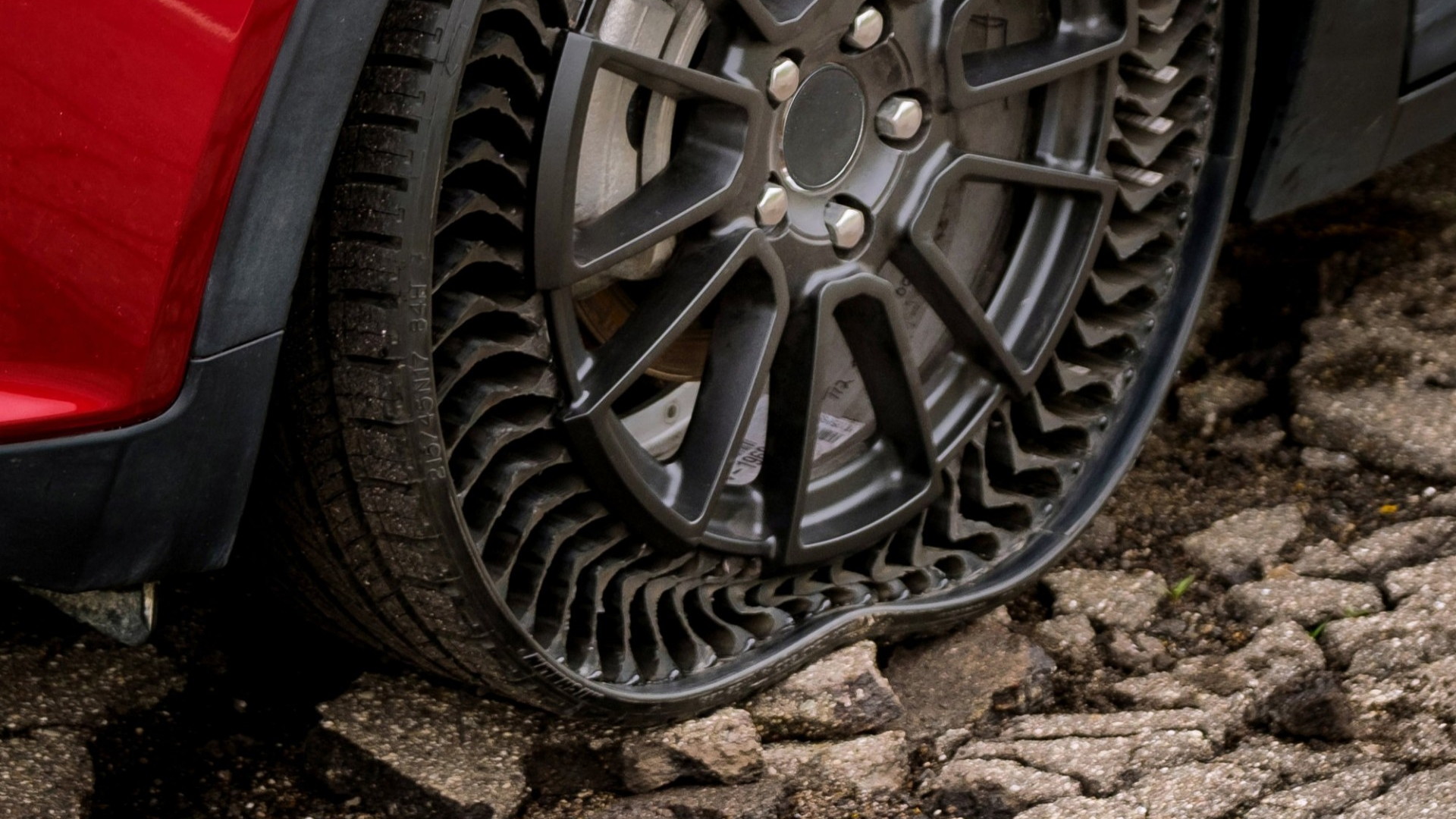 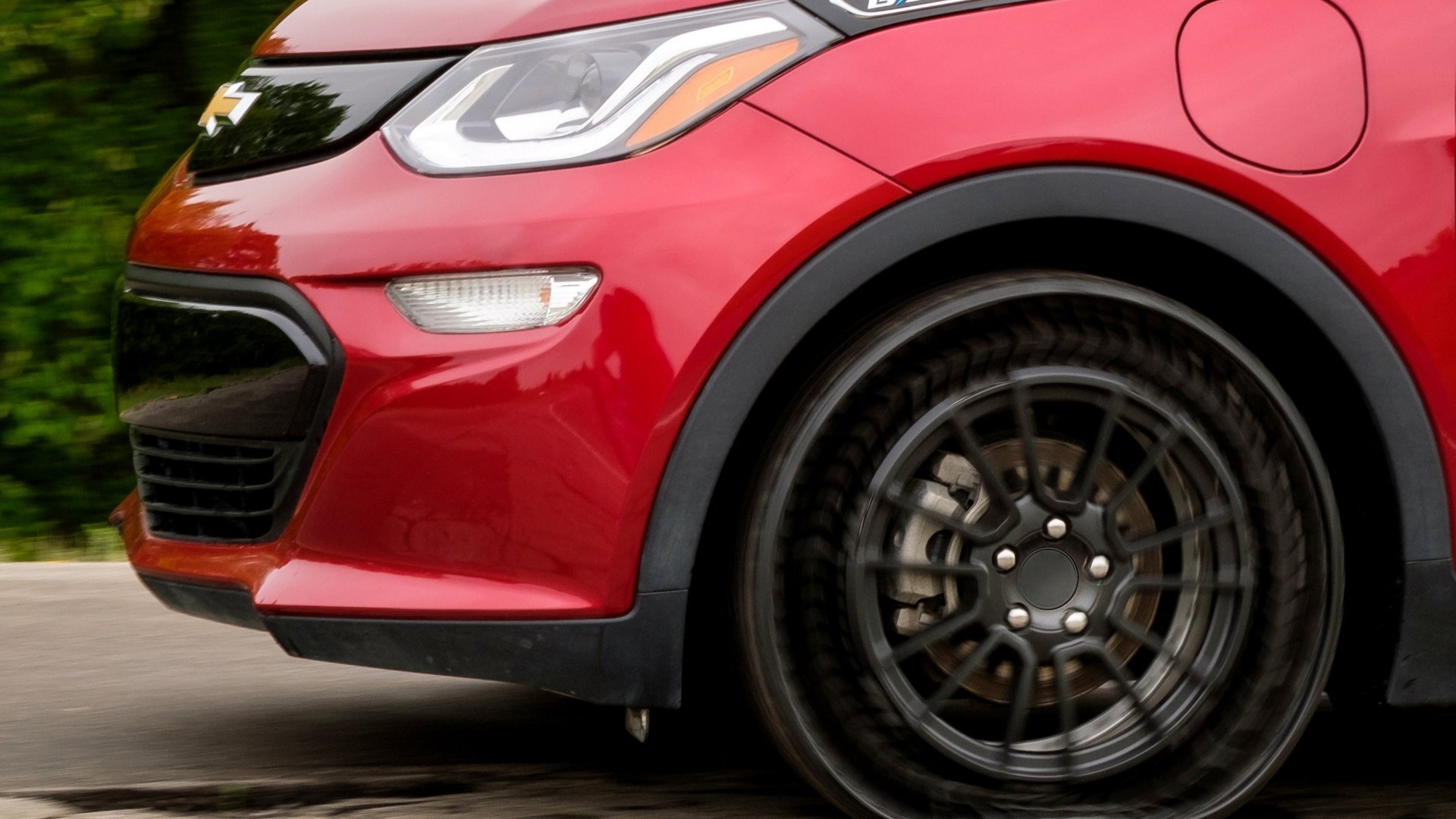 Michelin yesterday revealed a comprehensive look at what some cars could be rolling on in just five years: the company’s first airless passenger-vehicle tire.

The Uptis Prototype (Unique Puncture-proof Tire System) is a wheel/tire combination made primarily of rubber, aluminum, and a new resin-embedded fiberglass-reinforced material “with exceptional mechanical and thermal properties,” according to Eric Vinesse, the executive vice president for research and development at Group Michelin.

Vinesse said that the Uptis Prototype employs technology involving over 50 patents and was conceived to have less impact on the environment than current tires. In addition to claimed environmental benefits from the unit's production, the airless tire will eliminate waste of raw materials. According to Michelin, about 20 percent of all tires (approximately 200 million tires) are scrapped each year due to punctures or irregular wear.

The airless-wheel technology could appear in an eco-focused General Motors production vehicle as soon as 2024, according to Steve Kiefer, GM’s senior VP for global purchasing and supply chain, who was on hand to help present the tire concept at Michelin’s annual Movin’ On mobility and sustainability summit in Montreal.

Michelin and GM are jointly testing the prototype tire, starting on the Chevrolet Bolt EV and then moving testing to other electric vehicles. That will include real-world testing starting later this year.

These two companies aren't the only ones working on airless tires for vehicles; Toyota and Sumitomo have also shown a concept with them, in 2017. Michelin says that the tire should also result in a lot of pragmatic benefits like less downtime, near-zero maintenance, and more peace of mind as the risks of flats and blowouts are eliminated.

According to Cyrille Roget, Michelin’s technical and scientific communication manager, the Uptis weighs about 50 pounds—a few pounds more than a standard tire but slightly lighter than a run-flat. And the weight savings (and material savings) compounds when you consider that vehicles with the Uptis won’t need a spare tire, a jack, an inflator, or tire pressure sensors. It also measures up to low-rolling-resistance designs.

And as Michelin reveals, there’s another important reason why the Uptis almost certainly fits into the future—that it’s “well suited to emerging forms of mobility,” As automakers work not just to electrify their vehicles but to position them toward new kinds of mobility and future autonomous-driving features, some traditional pieces of the automobile may soon go away—like air in the tires.

“The vehicles and fleets of tomorrow—whether autonomous, all-electric, shared service or other applications—will demand near-zero maintenance from the tire to maximize their operating capabilities,” the company stated in an accompanying release.

Tire makers have definitely not been short on ideas. Over the past several years they’ve teased us with concept tires—including the last Michelin Vision concept revealed in 2017, featuring an airless, sponge-like design made of recycled, organic, and biodegradable material, and offering tread designs that are customizable via 3D printing. Other tire concepts in recent years have generated electricity, shape-shifted depending on driving needs, and even hosted living things. Yes, that was Goodyear’s Oxygene concept tire from last year, with living moss.

All these ideas may happen in a farther-off future, but in the meantime we may be bidding farewell to some other familiar fixtures: air pumps and gas pumps.