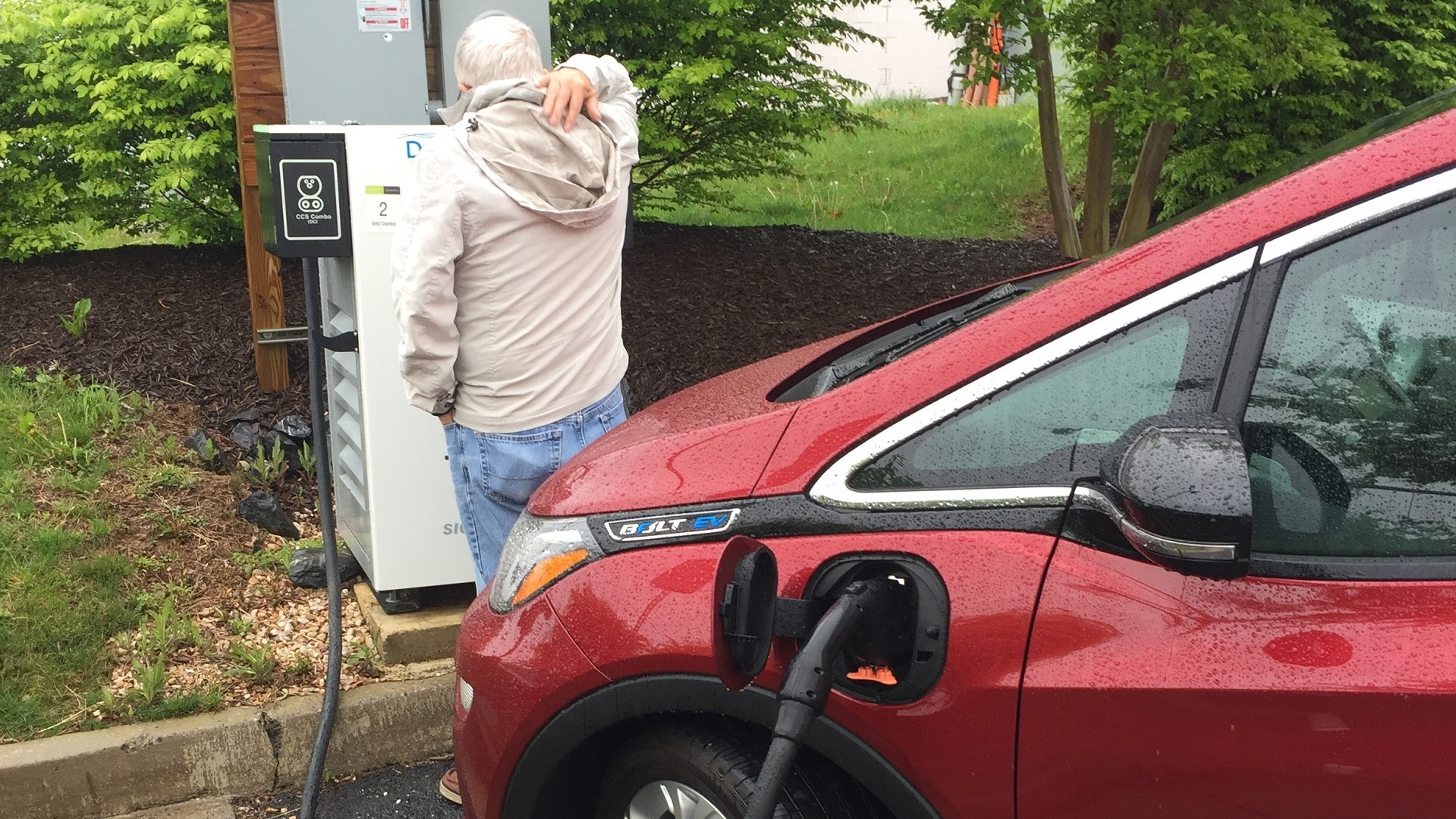 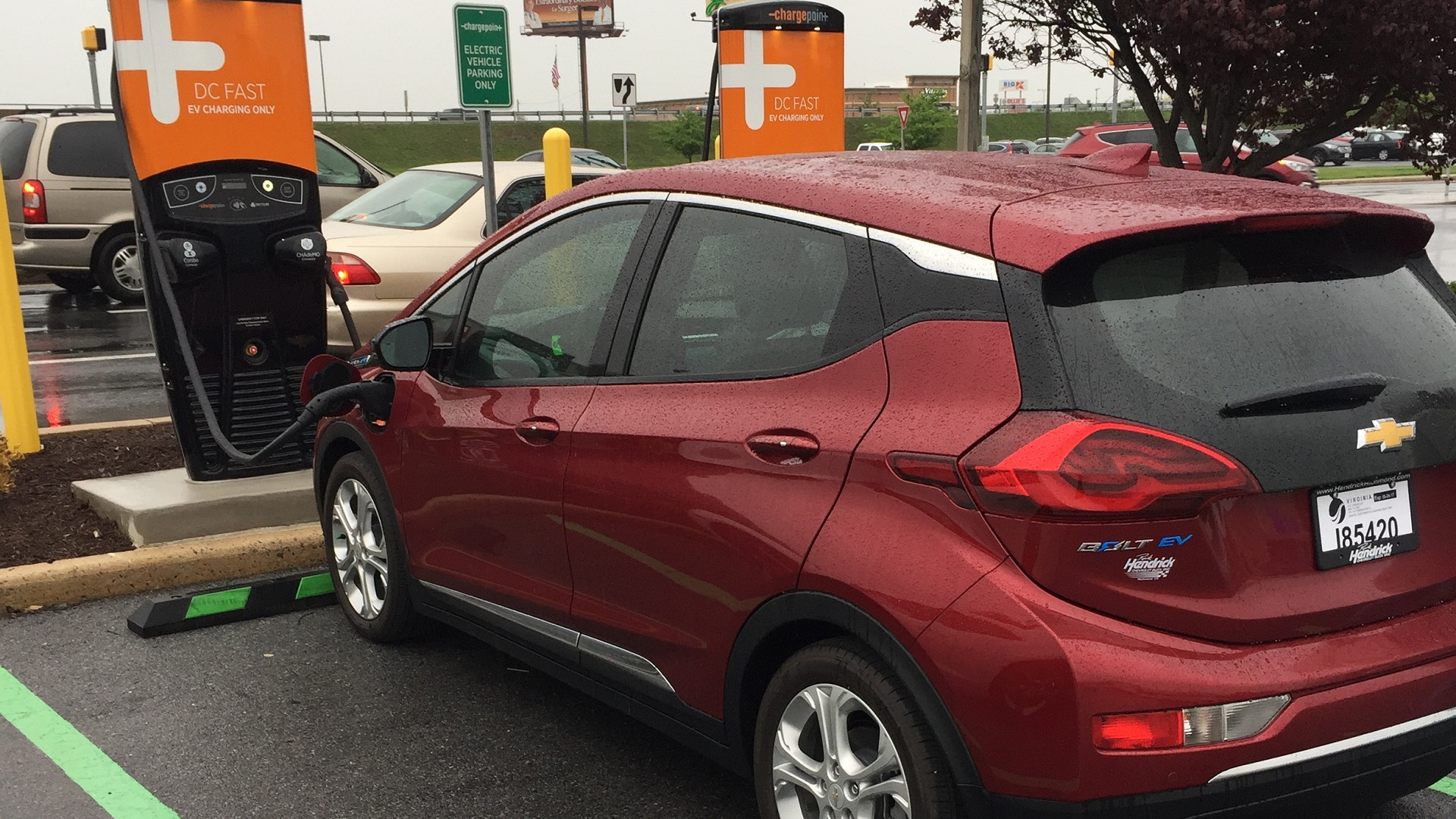 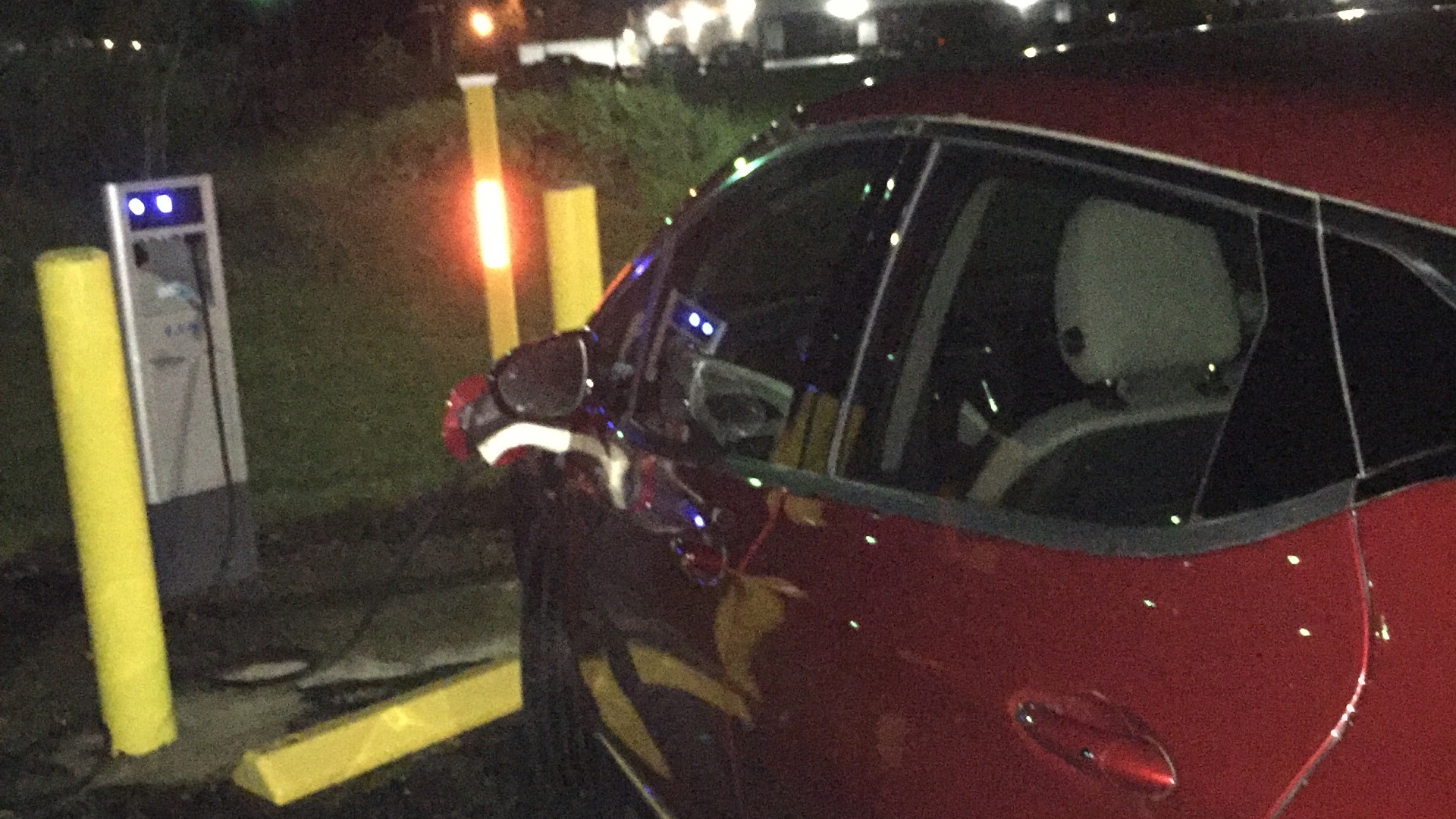 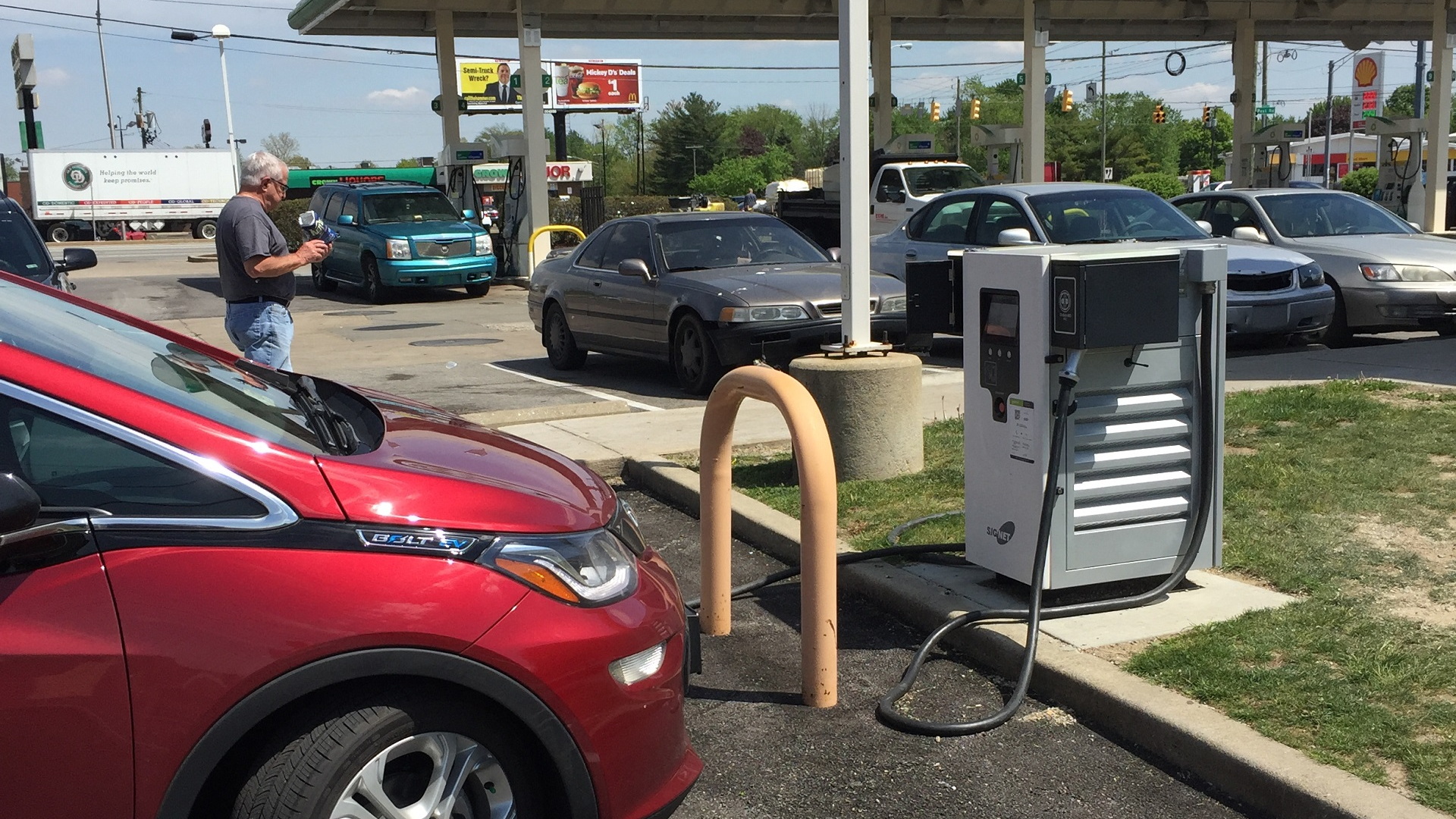 How badly do you want a new, affordable, long-range electric car?

Badly enough to drive it more than 800 miles without a unified fast-charging infrastructure?

Long-time Green Car Reports reader Massmann lives in a state that was in the very last group where Bolt EVs would be made available: he wouldn't have been able to take delivery of one until September.

So he took matters into his own hands, searched for dealers elsewhere who had Bolt EVs in stock, and planned a road trip.

What follows are his words, lightly edited by Green Car Reports for clarity and style.

Can you drive a Chevy Bolt EV half way across the country? Of course you can, but with lots of planning!

I had to have a new Chevrolet Bolt, but they wouldn’t be available in Missouri until September 2017. They went on sale on the West Coast last December, and on the East Coast in March.

READ THIS: This family has two Chevy Bolt EV electric cars, uses no gas at all

I’ve been interested in electric cars for years, but the 80-to-100-mile range cars were unacceptable. And of course the Tesla was a little out of my price range. Then I heard about the 238-mile range Bolt EV and I was in!

I started checking online for dealers that had them and which would be the most practical place to buy one and drive it back to St. Louis.

The logical thing to do would be to trailer your trade-in to the out-of-town dealer, then trailer your new electric car back home—but where's the challenge in that? Life is full of adventures and this would be one of them.

Researching charging-station sites are a must when planning, and I couldn’t have accomplished the trip without them.

ChargePoint and PlugShare are my favorite online resources, though it's interesting that not all charging stations show up on both sites. I'm not sure how they get their info, but when planning a trip, you should check more than one site.

A trip from the West Coast to St. Louis just wasn't going to work: there weren't enough Level 3 DC fast-charging stations—which give 160 miles of range per hour of charging—to make it viable.

You'd have to make numerous Level 2 stops (25 miles of range per hour of charging), and that just wouldn’t work unless you have a week to devote to seeing the great wild Wild West.

I found there are many more Level 3 sites between east coast and St. Louis. But, were there enough to make a trip to St. Louis practical?

I found several dealers in Virginia that had Bolts, and concluded a deal with Hendrick Chevrolet Buick GMC in Henrico, outside Richmond, Virginia.

Of course I had the route planned before I finalized the deal.  Interstate-64 goes directly from Richmond to St. Louis, but there aren’t enough Level 3s to make it practical. There is literally not a single DC fast-charging site in Kentucky, though I have no idea how or why.

The southern route through Tennessee would have worked until I got to Illinois, where I would have had to make at least one Level 2 charge. The northern route could work, but it would turn an 814-mile trip into a 1003-mile trip. Well ... it’s an adventure, right?

I had no idea of how many miles you could actually go on a fully charged Bolt EV. I did all the research, and watched all the videos, but you can still never really know for sure how far you can drive an electric car until you actually do it.

The longest leg of the trip would be 213 miles. Could we actually make it, or would we be stuck on the side of the road calling AAA?

My good friend Tommy B. and I drove my trusty 2007 Acura RDX—which delivered 17 mpg on premium gas, ugh—to Richmond for the trade-in. We had arrived at the dealer at 10 am, ready for our return adventure in the Bolt EV.

While the northern route was along I-70, we had to cross the Appalachian Mountains heading north out of Richmond to get to it. How would the Bolt EV perform in the mountains?

Having no experience in driving an electric car and no idea of how the Bolt would perform in the mountains, I was conservative in planning the first few legs of the trip.

Our first stop was Harrisonburg, Virginia (after 129 miles), at 5 Guys Burgers and Fries. As luck would have it, it poured rain almost the entire first day. I had never connected a charger, and of course never contacted the company that operates the charging stations to pay them.

So the first experience with fast-charging was in a downpour—but eventually it worked out fine. I did have to call the company twice, but we got it done.

Our next stop (114 miles more) was Hagerstown, Maryland, at the Hagerstown Valley Mall. We hung out at the mall and decided to have dinner there, which worked great.

Our original plan was to stop at a pair of Nissan dealers for the next two stops. I called them during my planning to see if they would allow a Bolt EV to charge, and they both agreed.

But we were running late (of course), and the dealerships would be closed by the time we got there—so we had to make a change on the fly.

EDITOR'S NOTE: Some Nissan dealerships offer DC fast-charging using only the CHAdeMO protocol and plug that is fitted to the Nissan Leaf, but Massmann's Bolt EV uses the CCS protocol and plug. Unless the dealers in question were specifically indicated to provide CCS fast charging, he might well not have been able to fast-charge his Bolt EV at all, so he may be lucky that his plans changed.

After checking online for an alternative to the Nissan dealers, we found a Holiday Inn Express in Bentleyville, Pennsylvania (169 miles away), with a 240-volt Level 2 charger. We had to spend the night somewhere, so it worked out great and we had a full charge the next morning.

I was interested to see how the Bolt performed coming out of the Appalachians. We were on Old US Route 40 (I'm still not sure why the directions took us that way), but it was crazy.

Part of the route was a 9-percent downhill grade for 3 miles, where the posted speed limit for trucks and buses was 10 mph! We had experienced a little range anxiety until then.

In the end, coasting downhill when we could and using the “Regen” feature on the Bolt EV, we were able to gain a full 50 miles of range.

With a full charge, no rain, and relatively flat terrain, the drive to Columbus, Ohio (174 miles), was a piece of cake. Our thanks to the Ohio State University Center for Automotive Research for the free charge.

While charging we used Maps to find a place to eat within walking distance. Off we went for the half-mile walk to a bar/restaurant ... which was closed! Maps then found us a chain restaurant we knew would be open, another three-quarters of a mile farther away.

Lunch finished, we took Uber back to our recharged car to save valuable time. And on to our next stop: Indianapolis, Indiana.

There are a few gas stations in the Indy area—Ricker’s BP—that also have Level 3 charging stations. What a great innovative idea. Perhaps this is future: gasoline and electric-car charging at the same location?

The distance from Columbus to the westernmost Ricker’s was 190 miles, which we could have made, but we decided to be a little conservative. Once again we really didn’t know how far the Bolt could go on a full charge.

So we charged at the easternmost Ricker’s, and drove through Indy to the westernmost one in Plainfield, a great place to recharge, including a few places to eat, some with WiFi.

There, we had to get a full charge for the longest leg of the journey: 213 miles to Edwardsville, Illinois.

We had experimented on the Columbus-to-Indy leg and learned that setting cruise at 60 mph and turning off the climate control every once in a while helped to get the most miles per charge. You're just not going to go 200 miles driving at 70 to 75 mph, and 80 mph would be out of the question.

But driving that long leg was a little frustrating.  We set the cruise at 60 mph, and still had a little range anxiety. Imagine driving three and a half hours at 60 mph. We thought many times we were going to be run over by 18-wheelers, but it worked.

The Bolt EV has a gauge that shows the approximate miles left in the battery, with a maximum and a minimum, calculated by how you've been driving. When we started, the minimum number was less than 213.

But the longer we drove, the more the minimum figure slowly rose. In due course it surpassed the needed 213 miles—and we got to Edwardsville with 23 miles to spare.

So yes you can drive a Chevy Bolt the advertised 238 miles on a charge, if you can drive 60 mph. (That is an EPA combined city and highway range, which includes 55 percent city driving; the highway-only range would be considerably lower.)

Our very last charging station before making it home was an EVGo site at the Commerce Bank in Edwardsville, Illinois. I had previously set up an account with EVGo, but hadn’t gotten my swipe card in the mail. No problem: just give them a call and tell them where you are, right?

It was late, we had been driving all day, and by then, we were ready to park the Bolt and call for a ride home, just 35 miles away.

CHECK OUT: How much is a replacement Chevy Bolt EV electric-car battery?

But it pays to travel with someone who is way smarter than I am, and Tommy B is that.

He noticed that there was a credit-card slot on the charger ... and it worked perfectly!

So, can you drive a Chevrolet Bolt EV halfway across the U.S.? Yes, you can—but it does take some extensive planning.