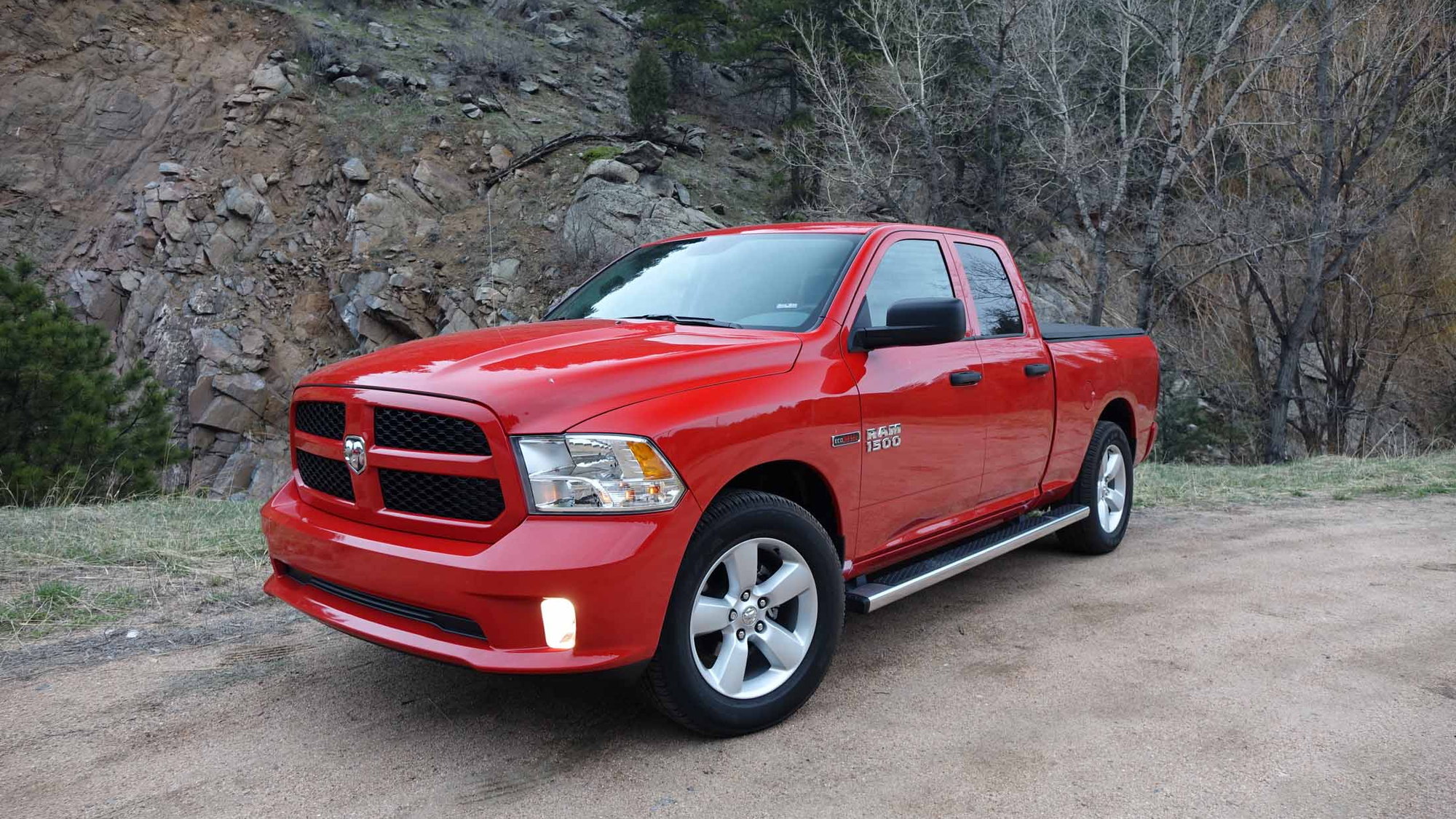 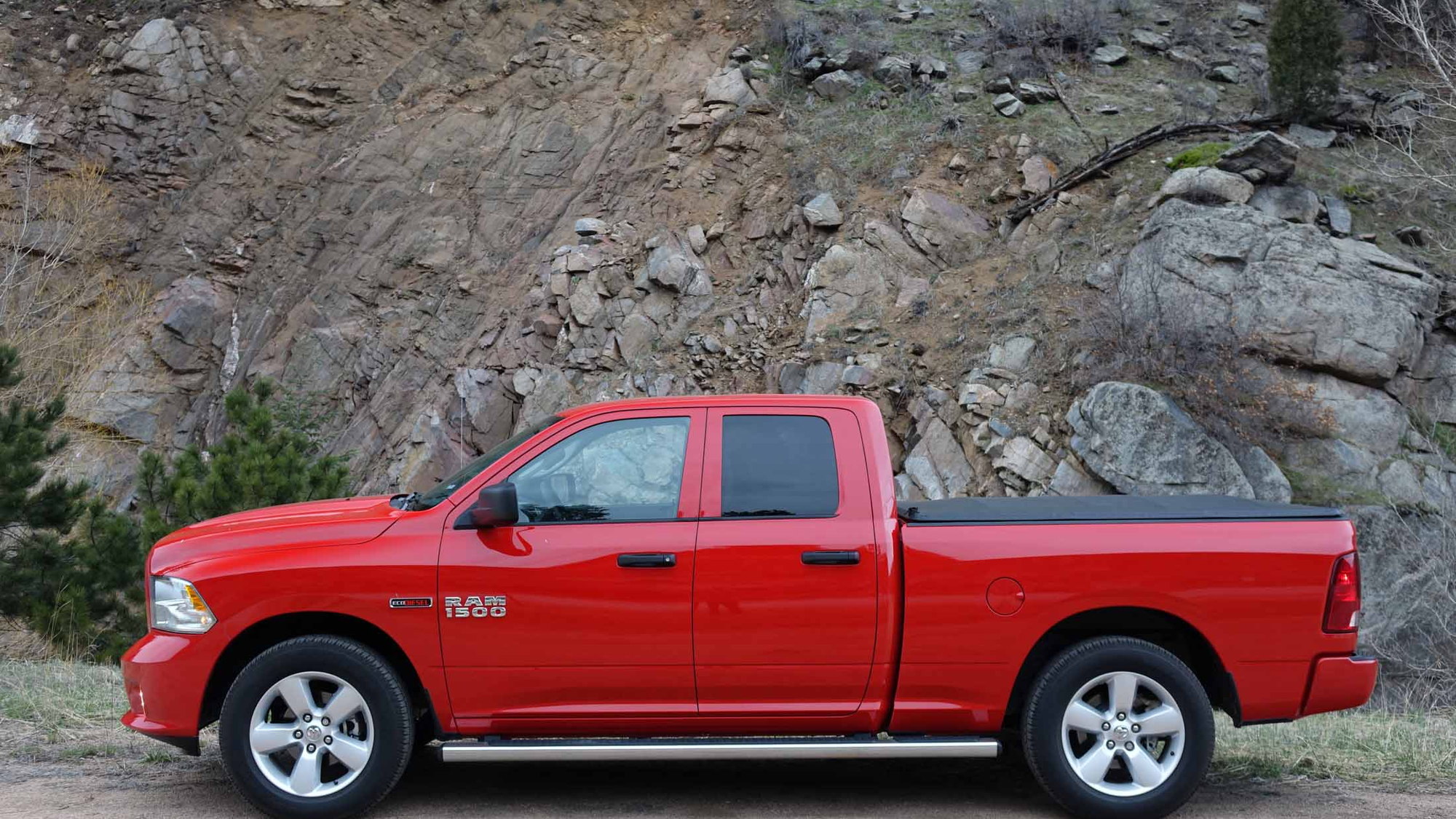 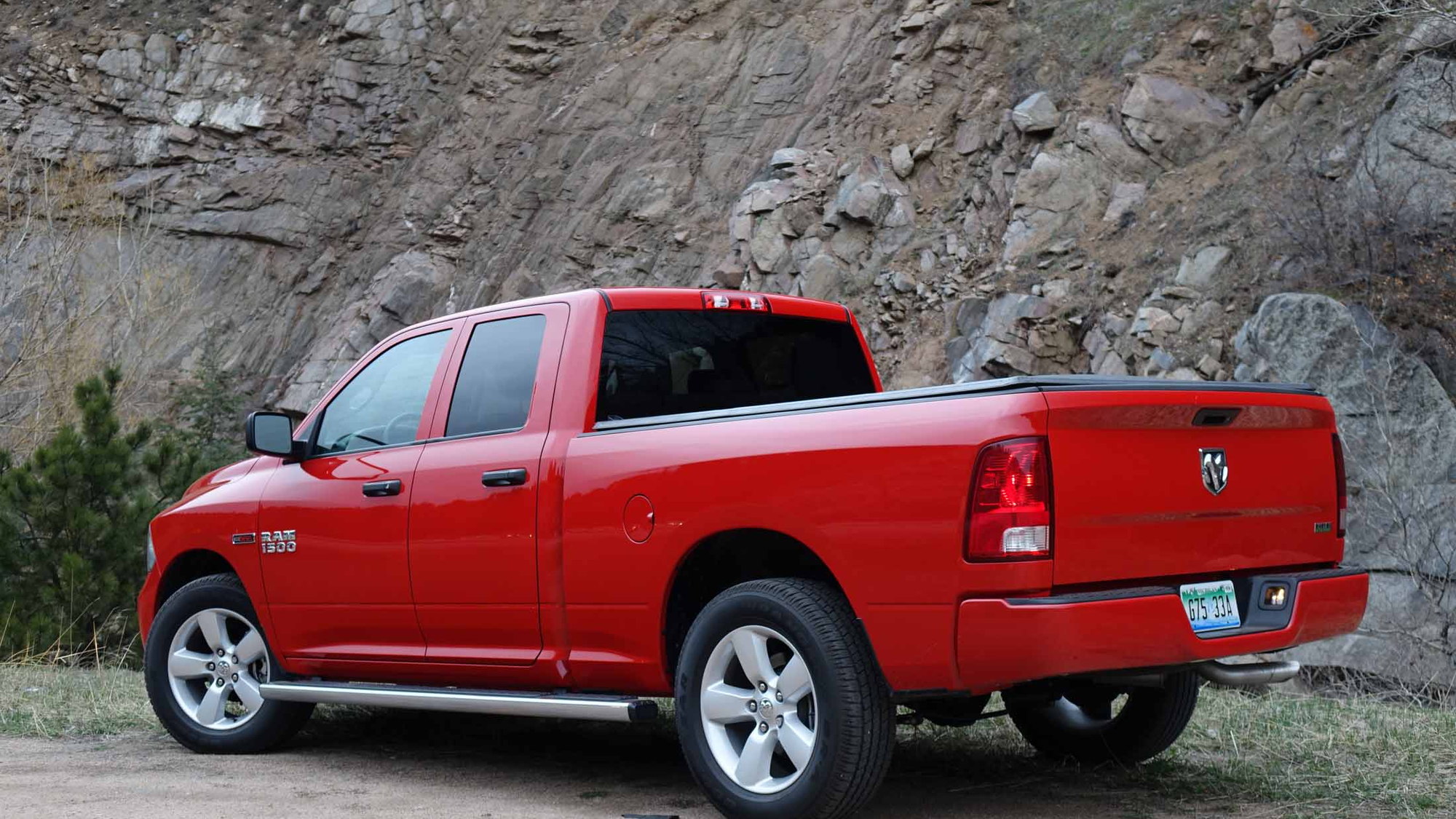 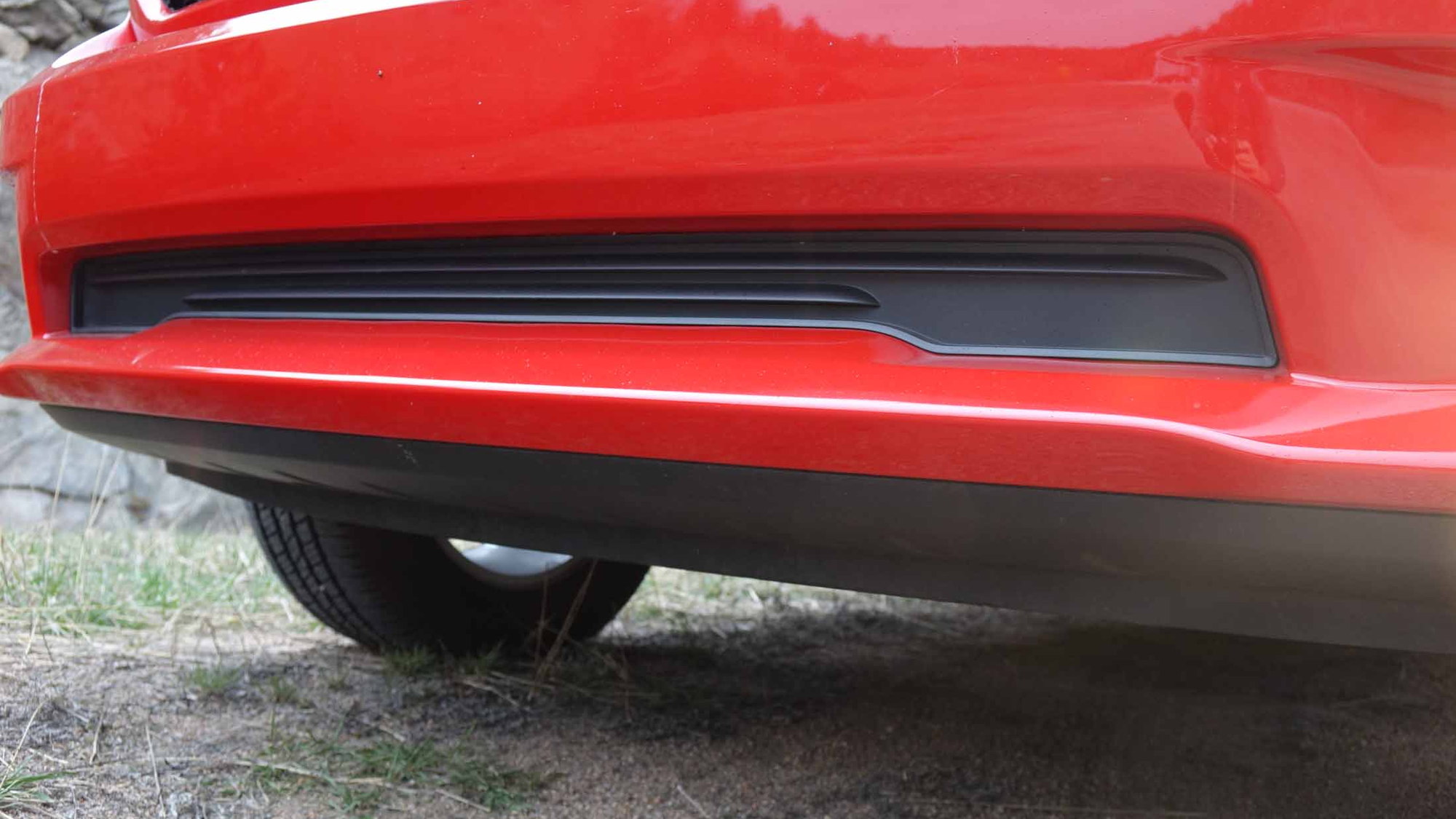 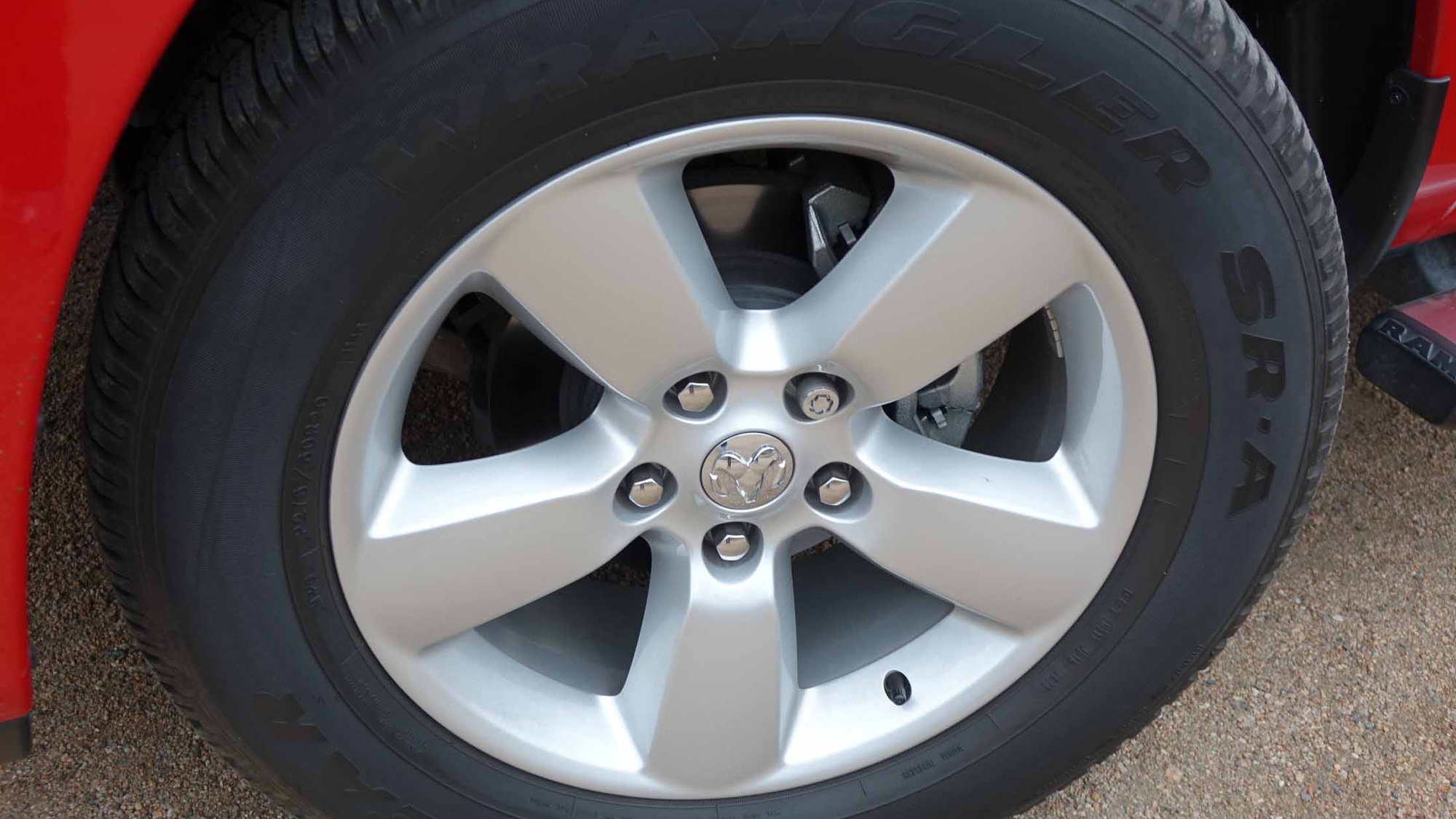 It may not look like it, but the Ram full-size pickup you see here may be one of the more interesting new trucks on the road today.

You might view it as this decade's version of the Camaros, Mustangs, and Mopars that emerged in earlier days from back-corner "skunkworks" engineering groups at each Detroit automaker. How so, you ask?

This Ram isn't the run-of-the-mill SLT model that you'll see in the parking lots at every ranch supply store (or high-end shopping mall) in America's heartland.

The folks at Ram Trucks put a lot of work into thinking outside the box to create a full-size pickup that offers the fuel economy of a V-6 midsize sedan.

And as we found, its EPA ratings of 24 mpg combined (21 mpg city, 29 mpg highway) actually underrate its fuel efficiency at highway speeds.

The heart of this truck is what gives it the EcoDiesel badge: parent company Fiat Chrysler's 3.0-liter turbodiesel V-6 engine, which you can add to just about any Ram trim level.

(It's also available as an option on the Jeep Grand Cherokee luxury SUV, for that matter).

Designed by Italian engine maker VM Motori, now a division of FCA, the EcoDiesel V-6 is rated at 240 horsepower and 420 pound-feet of torque in this application.

For the record, it is fitted with a Selective Catalytic Reduction emission-aftertreatment system that injects a liquid urea solution into the exhaust at specified times to convert harmful nitrogen oxides into nitrogen and oxygen.

As well as its fuel tank, all EcoDiesel Ram trucks have a separate tank holding several gallons of diesel exhaust fluid, or DEF—which must be kept filled, or the truck won't run.

What makes the HFE version of the Ram 1500 unique is the way it came together as a product.

It's likely very similar to what their grandparents did back in the 1960s, looking for bolt-on parts to make their pony cars just that little bit faster.

To get there, they also booked a lot of time in FCA's wind tunnels.

They found that the most aerodynamic configuration of the Ram full-size pickup was the middle model, the Quad Cab with front-hinged short rear doors.

The Quad Cab sits between the standard two-door regular cab, with a single row of front seats, and the living-room-on-wheels Crew Cab.

Of course, Ram's engineers picked a 4x2 model, since the rear-wheel-drive-only version weighs less and sits lower to the ground than the 4x4.

All diesel Rams include grill shutters that activate at highway speeds to improve aerodynamics.

And, regardless of engine, all Rams have a ducktail spoiler integrated into the tops of their tailgates to improve airflow as it departs the vehicle.

Like all big trucks, the Ram can be ordered in a dizzying array of trim levels. Knowing that weight (not to mention cost) would be crucial for the HFE, the engineers started with the most basic truck they could build.

Ram chose to forgo the cost, weight, and complexity of the normally optional air suspension, which might have allowed the HFE to hunker down closer to the road at highway speeds for lower drag and presumably better fuel economy.

From there, the engineers looked at what else could make the truck ever so slightly slipperier.

A tonneau cover was an obvious choice. But chrome running boards?

They actually help to push air around the truck, Ram engineers found, after investigating multiple add-ons from their accessory catalog.

Even though they add weight, the running boards are standard on the HFE.

But they found that the one-piece plastic-covered front fascia from the low-end Ram Express cut through the air better than any other bumper setup.

Inside, weight savings was key. The HFE is decidedly low on features, especially for a base price of nearly $40,000.

The only factory option currently offered on the Ram 1500 HFE is a cold-weather kit that includes a block heater.

That means that HFE buyers sit on vinyl seats and listen to a basic AM/FM radio with a USB input but no Bluetooth.

They'll unlock the truck's doors using a standard key in a door lock, not a remote fob.

They do get power windows, but they'll forgo a driver's vanity mirror in the visor, a backup camera, and even a height-adjustable seat.

This is a basic truck by 2016 standards—but that's because it was built for only a single purpose: just sipping at diesel fuel.

It worked, too: the Ram 1500 HFE is EPA-rated at 24 mpg combined, 1 mpg higher in all three ratings than any other Ram EcoDiesel pickup.

Notably, it's well above the 20-mpg combined rating that for years represented the ceiling for any full-size pickup truck sold in the U.S.

And as we found out during a lengthy road trip, the EPA figures are conservative.

Ignore the lack of luxuries (hey, a basic stereo actually sounds pretty good), and the Ram 1500 HFE may be the finest highway-cruising full-size pickup built.

We did our best to run through a full tank of fuel, and managed to net 31.5 mpg on the highway, as indicated on the Ram's digital display.

That's without changing our driving style in any way, let alone so-called hypermiling, we should note.

We stuck to the speed limit, or slightly above it, and liberally used the truck's cruise control—as most owners probably would on long road trips.

That kind of fuel economy isn't too far off what you might get in a V-6 midsize sedan, at least in real-world use.

You won't get 31.5 mpg if you're pulling an 8,000-pound trailer behind you, but we're willing to bet it will still sip less than any other full-size pickup.

As for its general operation, the Ram 1500 HFE drives like any other Ram. With coil-sprung rear suspension, it rides smoothly, with only a hint of the empty-bed looseness you'll feel in most pickups.

Its steering is light but precise by pickup standards, and it corners confidently and largely free of drama.

A Ram 1500 HFE EcoDiesel isn't for everyone, by any means—and you will certainly pay a price to get this kind of fuel economy.

But for long-haul drivers who place an emphasis on hauling, this may be the best pickup truck they will have seen to date.