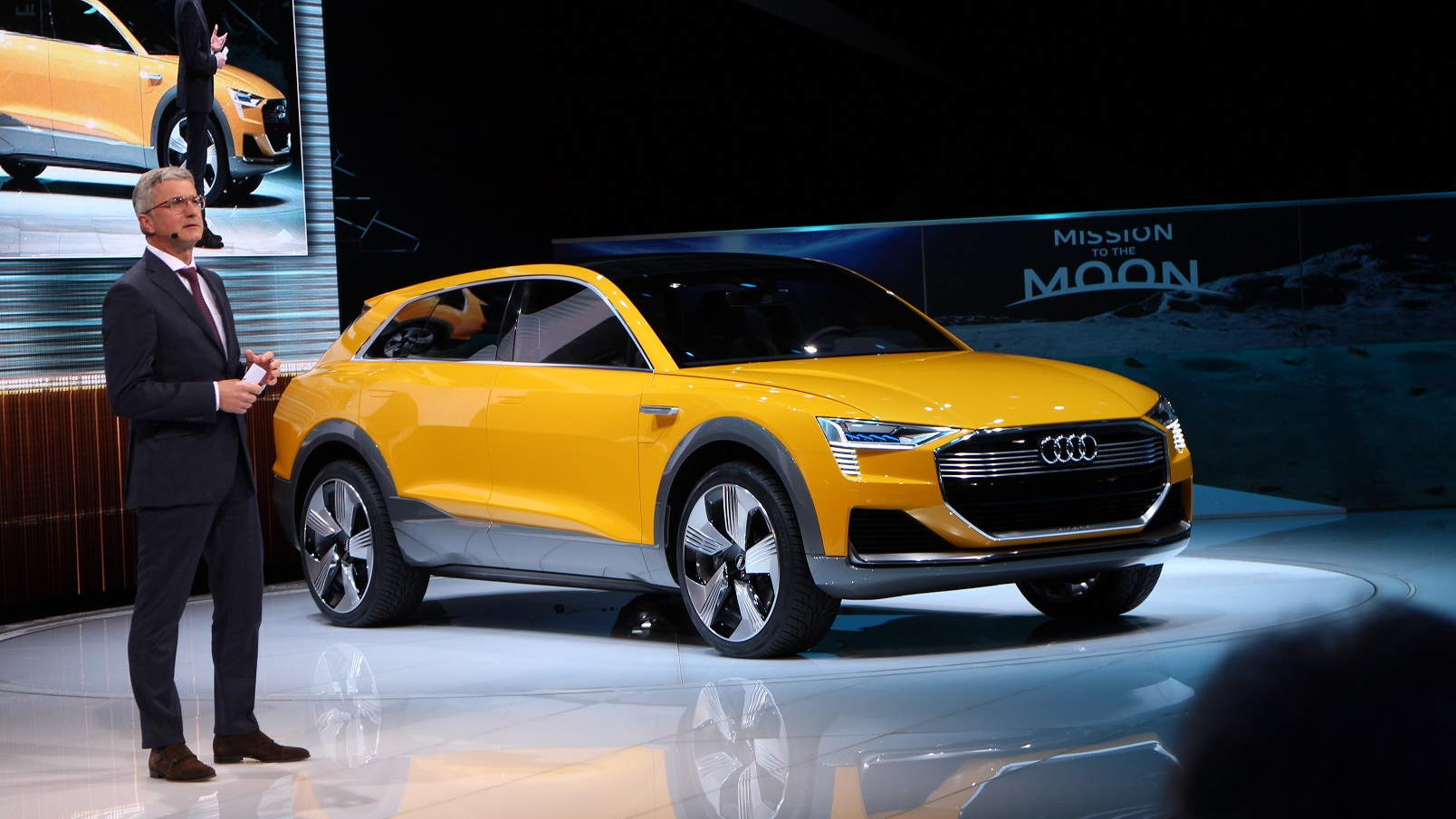 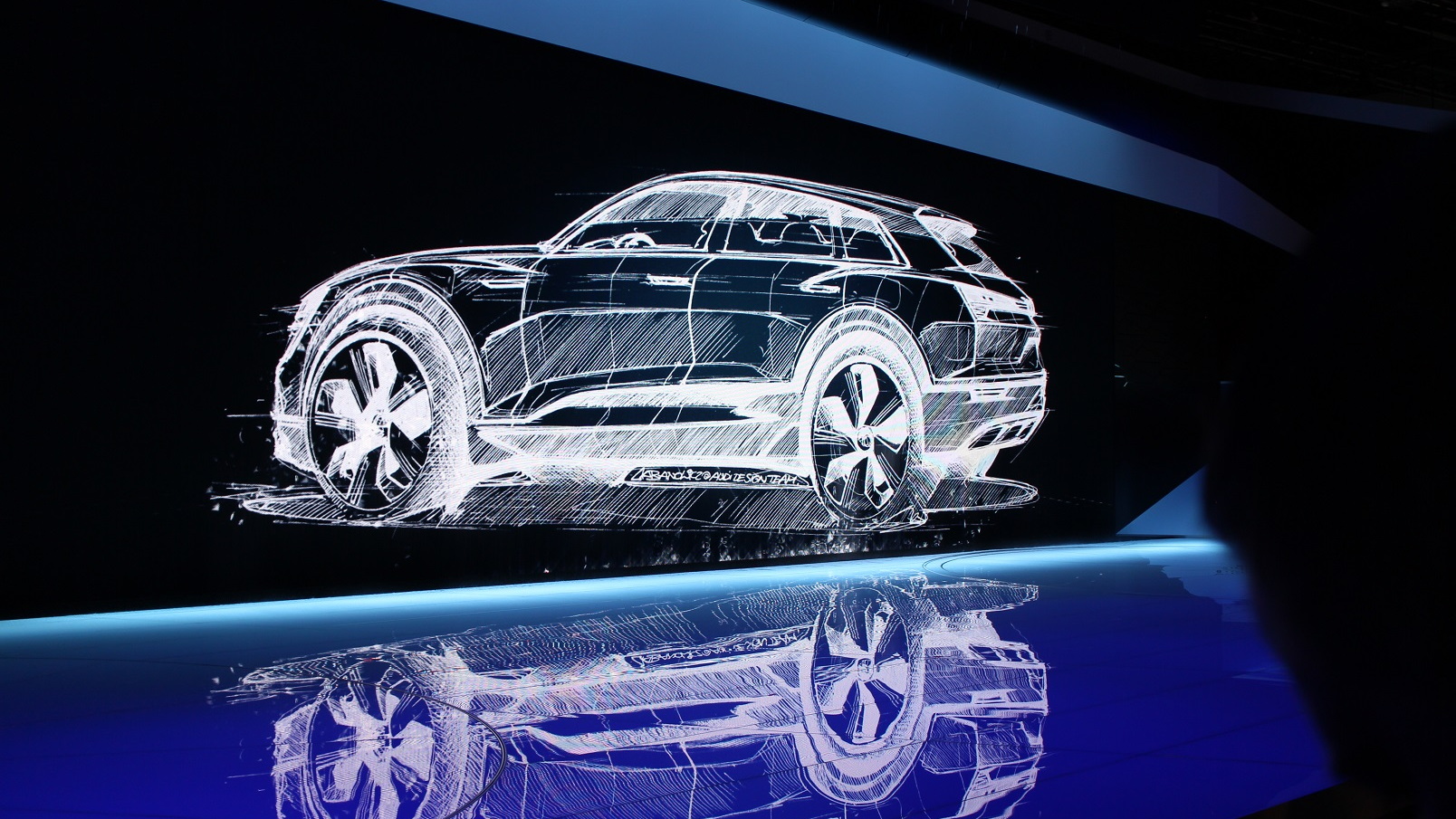 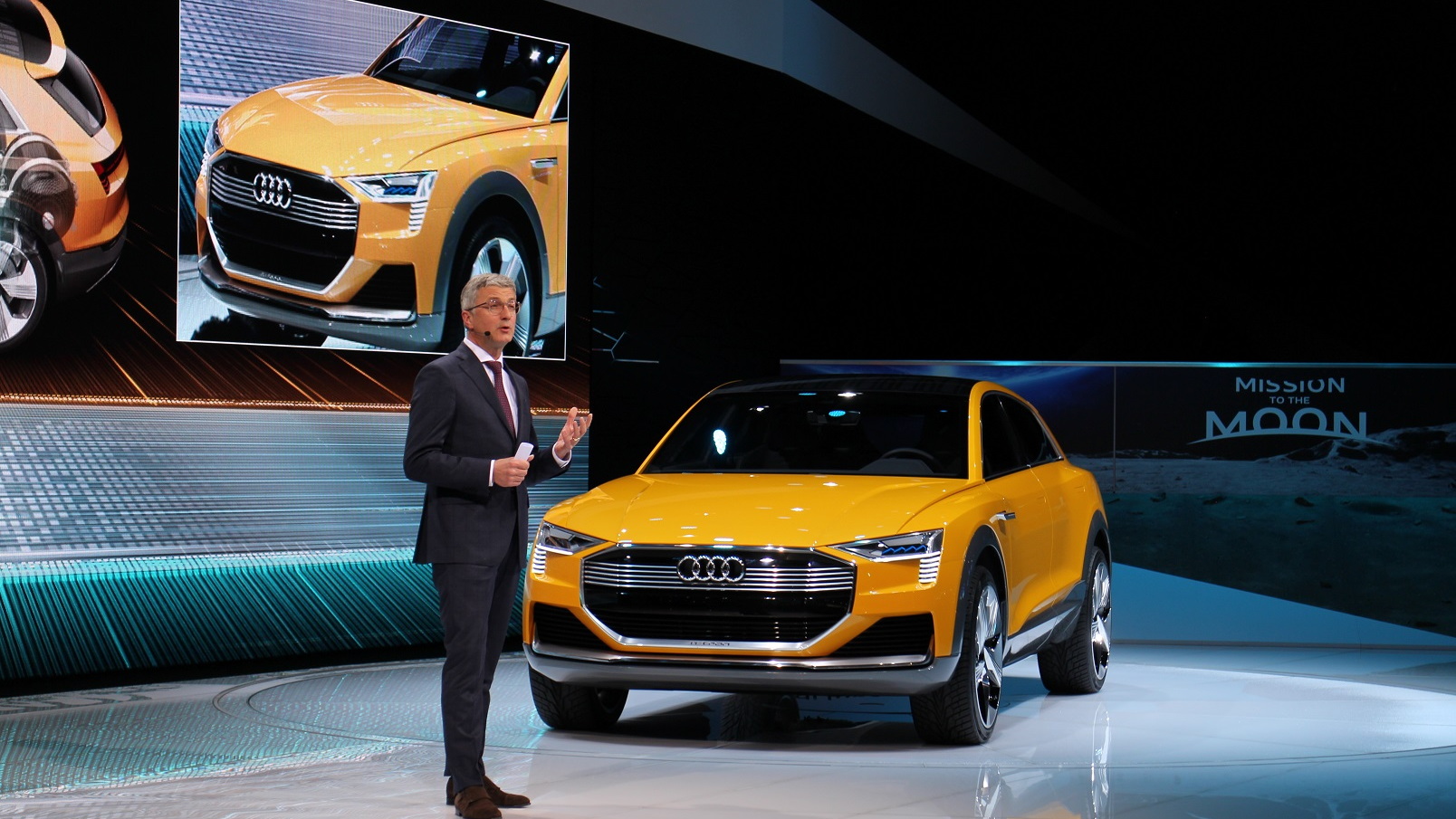 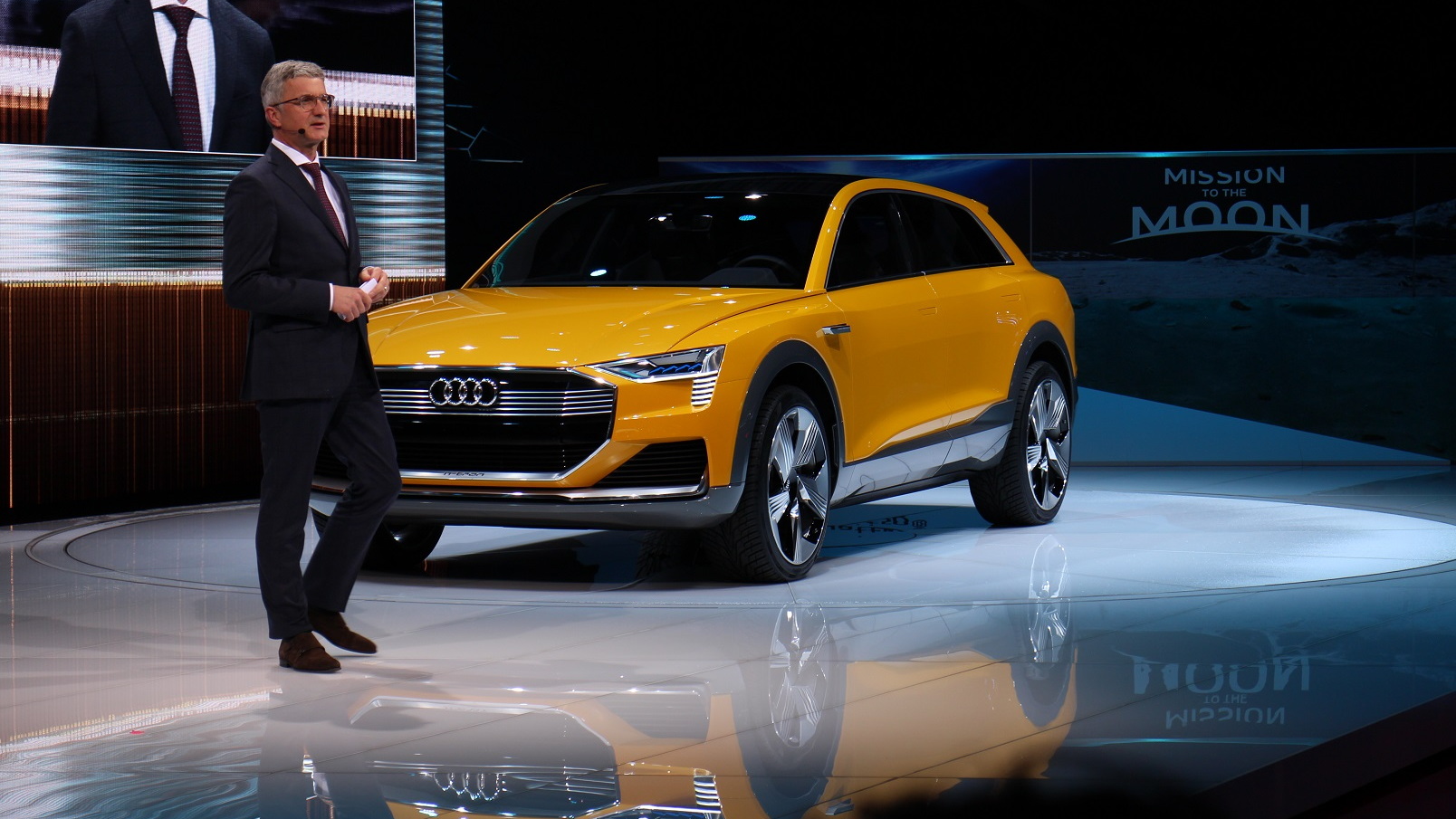 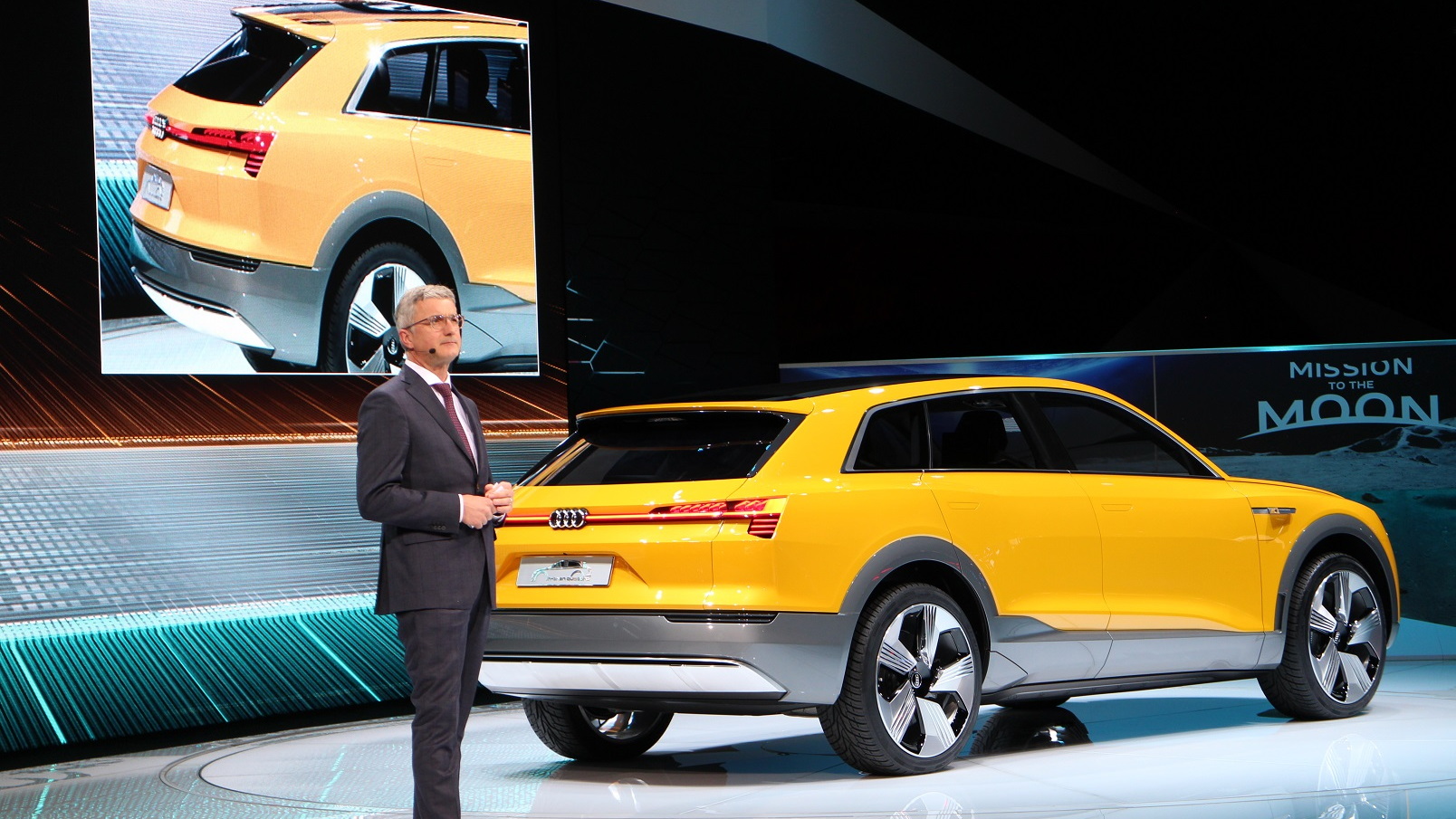 Hot on the heels of the all-electric Audi e-Tron Quattro Concept it revealed last fall, VW Group's luxury brand Audi has released a second iteration of the same concept.

This one still has all four wheels powered by electric motors, but the electricity to run them comes not from a large battery pack but a hydrogen fuel cell.

UPDATE: This article previously noted that Audi CEO Rupert Stadler mentioned the all-electric utility vehicle's name for the first time, referring to it as the "Q8 e-tron." Audi later clarified that the future Q8 would be an "upper luxury SUV," whiel the battery-electric SUV foreshadowed by the e-Tron Quattro Concept has not been named yet

[EDITOR'S NOTE: The Audi e-Tron Quattro Concept, first unveiled at the 2015 Frankfurt Motor Show, was long expected to carry the Q6 designation when it launched as a production vehicle in 2018 or later. In October 2016, however, Audi said the production version would be called simply Audi e-tron. We have updated this article accordingly.]

Both the e-tron and h-tron concepts are built on an adaptation of Audi's latest MLB-Evo architecture for vehicles whose engines are sited longitudinally, not transversely.

Although as Siegfried Pint, Audi's electric powertrain chief points out, the electric-drive versions of the MLB-Evo actually have the e-motors mounted transversely--but no matter.

The previous e-Tron Quattro Concept used a pair of 90-kilowatt (120-horsepower) electric motors on the rear axle, and a single 140-kW (188-hp) motor for the front axle.

The new h-tron concept rearranges those components, with the 140-kW "front" motor moving to the rear axle and a single 90-kW "rear" motor now powering the front wheels.

Rather than the e-tron's large, flat battery pack, the hydrogen-powered Quattro Concept has a 1.8-kilowatt-hour lithium-ion battery from an Audi plug-in hybrid model to accommodate transient power demands and store recaptured braking energy.

And the 110-kW (148-hp) fuel-cell stack and its associated power electronics are mounted up front, under the concept's hood.

The battery pack delivers a higher power output than usual, with sustained output of 100 kW (148 hp) possible, adding up to a total maximum power delivery of 210 kW (282 hp) for temporary bursts of acceleration.

A total of 6 kg of hydrogen is stored among three different tanks. One is mounted lengthwise in the tunnel between the front seats, and the other two sit transversely under the rear seat and the load bay.

Pint also noted that the unusual power electronics work in what Audi terms a "tripod" arrangement, with DC-DC converters allowing power to be shuttled in any direction among the fuel cell, the battery pack, and the two e-motors.

The e-Tron and h-Tron variants of Audi's electric-drive platform were designed concurrently "from the start," Pint said.

The battery-electric e-Tron routes energy around the flat battery pack into strong structural members in the door sills, while the larger tunnel of the h-Tron can absorb energy and route it lengthwise along the center of the structure.

With the hydrogen tanks fully filled, Audi says the h-Tron Quattro can deliver more than 350 miles of range on the European NEDC test cycle. It quotes 0-to-62-mph acceleration time as less than 7.0 seconds.

Pint referred to the hydrogen-powered concept as the "next evolutionary step" in electric-drive vehicles.

But Audi CEO Stadler said nothing about production plans for a h-tron, while committing the brand to delivering the battery-electric e-tron during 2018.

For all the latest news on cars and concepts in Detroit, see our Detroit Auto Show news page.