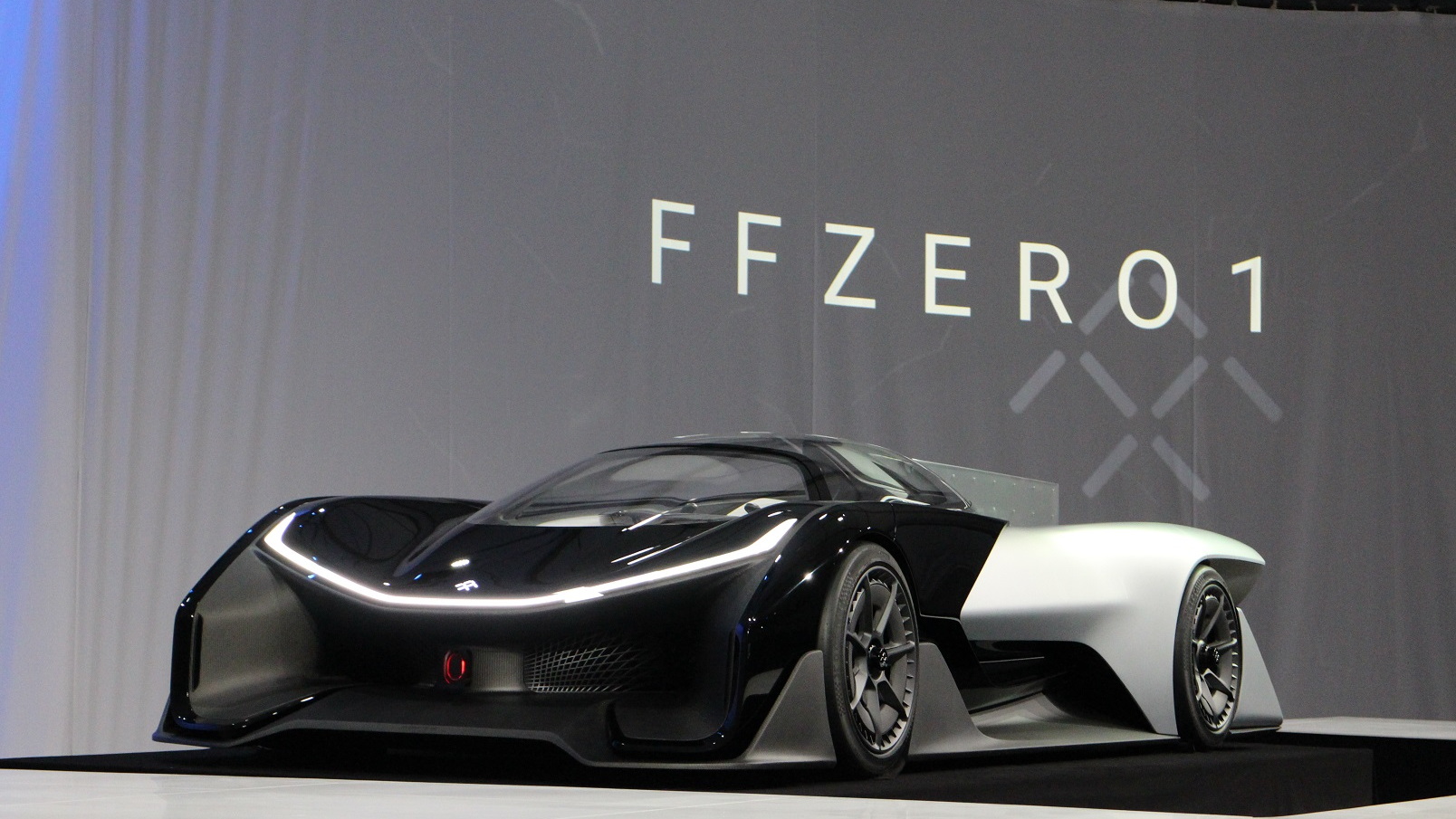 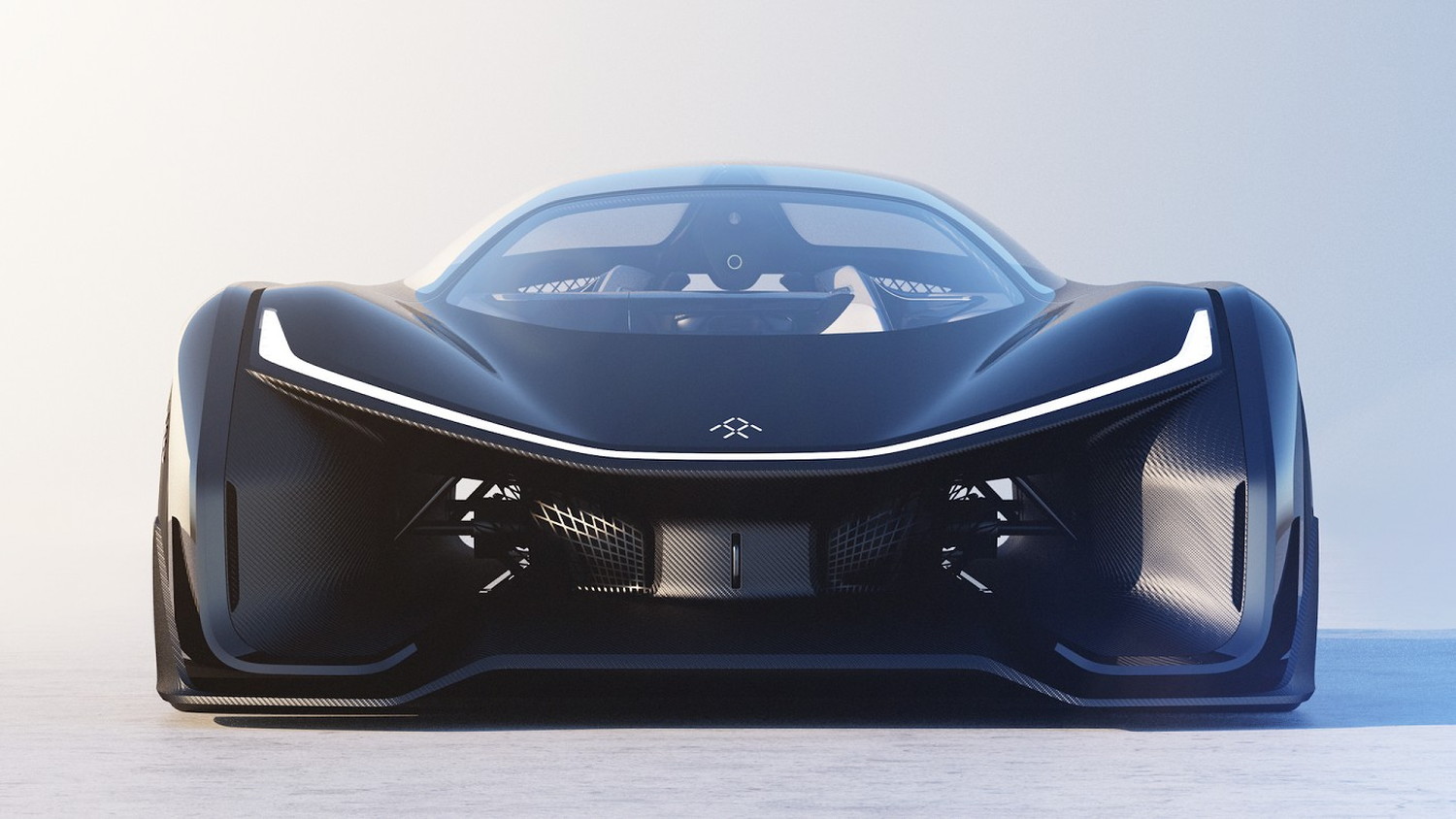 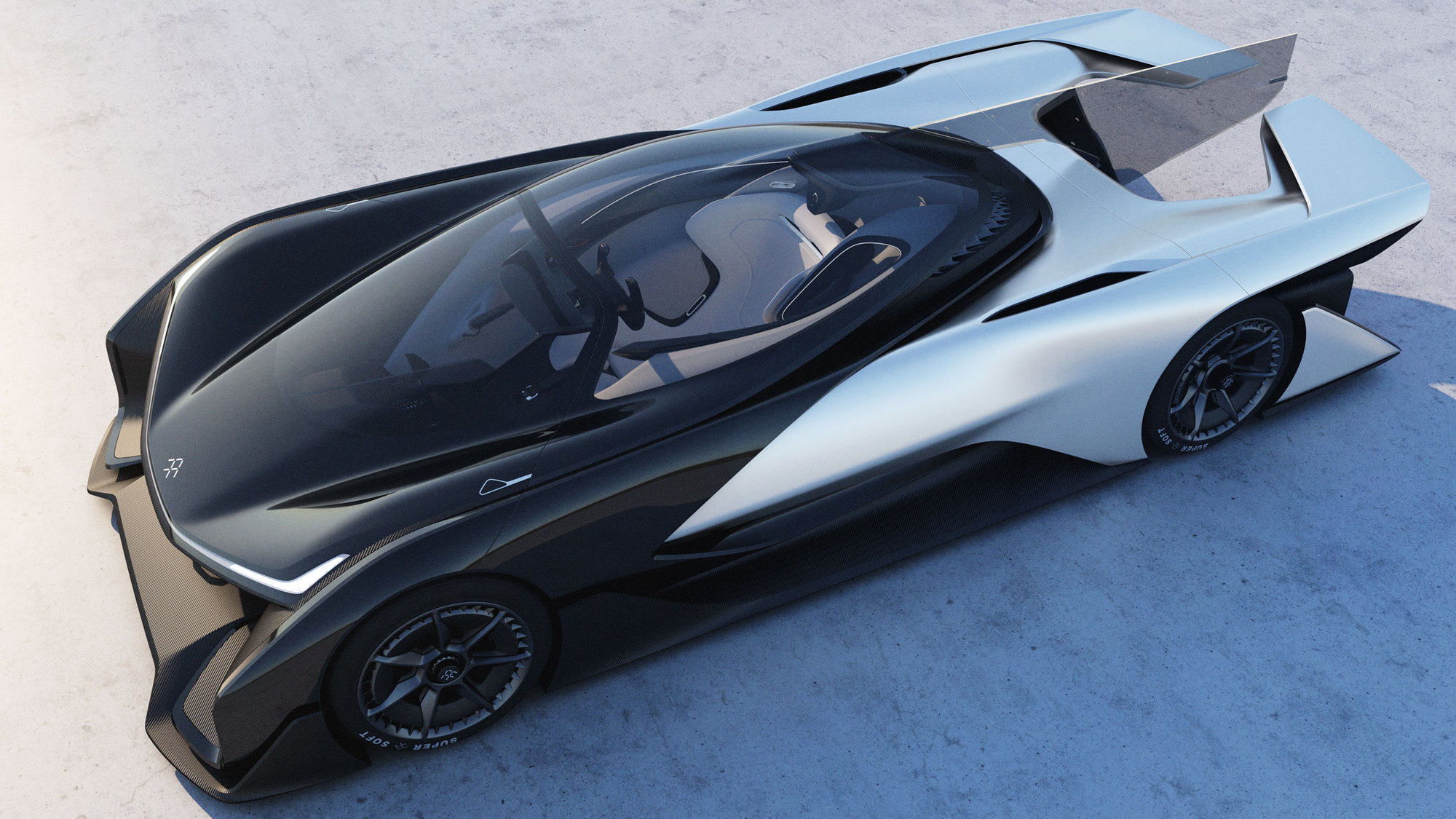 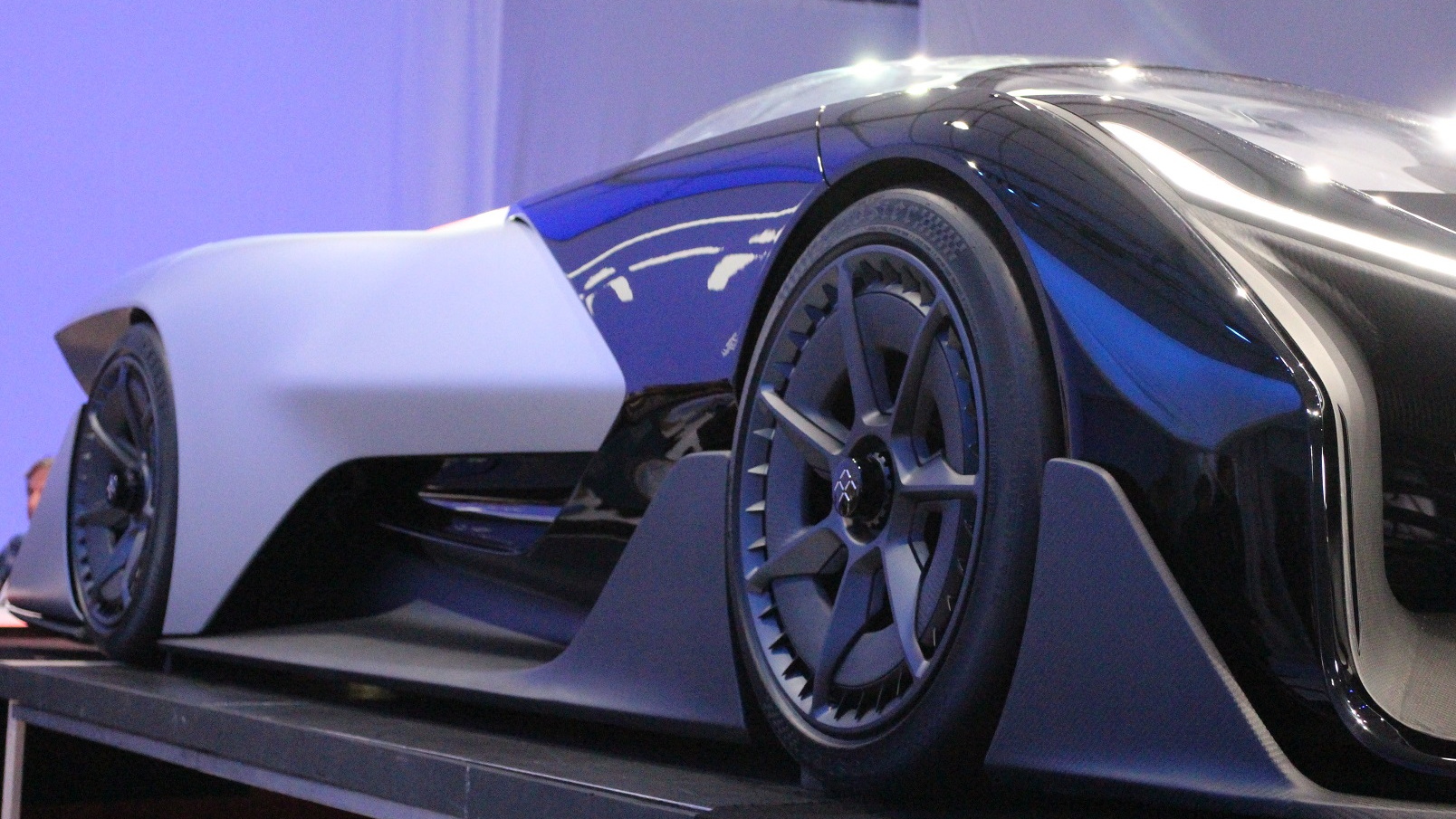 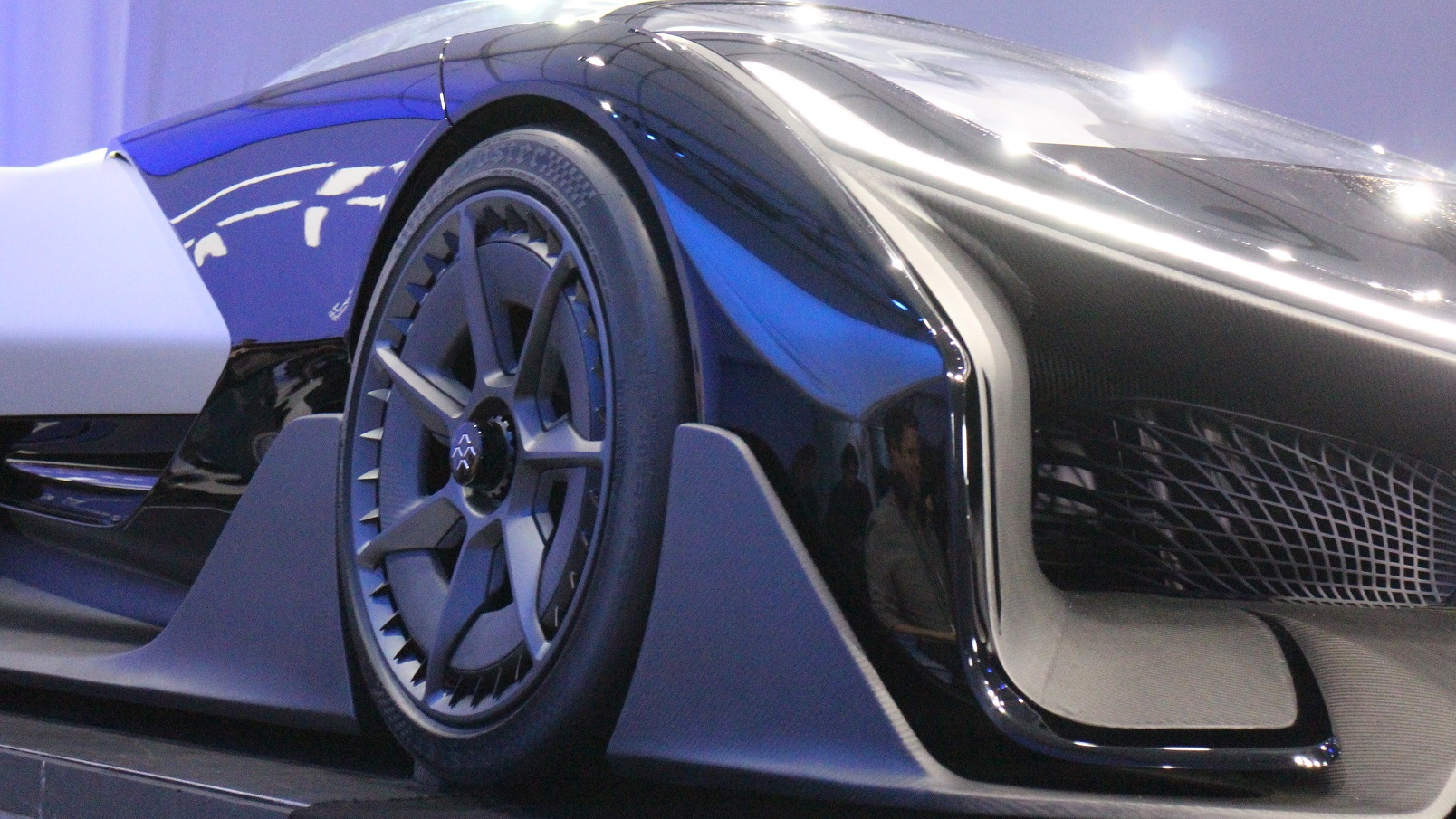 Mysterious startup carmaker Faraday Future has now revealed the FFZERO1 concept, a supercar built to demonstrate the flexibility of its modular electric-car architecture.

The Variable Platform Architecture, or VPA, is essentially a skateboard design with a flat battery pack, a motor on one or both axles, and crash structures front and rear.

DON'T MISS: Faraday Future Asks: How Would You Invent A Car With A Clean Sheet Of Paper?

But what form that car may take was not discussed in the presentation, nor were any details provided about the new business models the company plans to use to "transform" mobility and vehicles.

The event was the hot ticket on Monday night among media, industry analysts, and investors the evening before Press Day at the massive Consumer Electronics Show in Las Vegas.

Afterward, attendees walked away with what can best be described as mixed impressions.

For a company with a supposed billion-dollar commitment from Jia Yueting, the founder of Chinese internet group LeTV, there was much discussion about what Faraday intends to do but no hard details beyond the platform architecture.

And although Faraday calls itself a tech company, not a carmaker, it missed an opportunity by not having the chassis itself on display.

When Tesla Motors showed the body-in-white for its Model S electric luxury sedan at the 2011 Detroit Auto Show, the visible evidence of its technical skills silenced critics who said it would never be capable of designing "a real car."

Instead, Faraday's exercise in all-out supercar fantasy is meant to show some of the design language that future Faraday vehicles will share.

That includes a so-called UFO Line that runs around the center of the vehicle, according to head of global design Richard Kim, that's "intended to give the sense that this vehicle is not completely of this world."

The car itself--somewhat resembling a Batmobile--is meant to demonstrate what a high-performance electric track car could be.

One motor per wheel, totaling more than 1000 horsepower, will provide 0-to-60-mph acceleration in less than 3 seconds and a top speed of more than 200 miles per hour.

The concept also has "aero tunnels" that run through the vehicle from front to back, reducing lift and cooling the batteries--something Kim said aerodynamicists have always wanted but no maker has been able to provide.

The FFZERO1 has a smartphone in the center of the steering wheel for its single occupant, which customizes its performance to the driver's preferences, but can also drive itself when desired.

"Conceptually," the company said, "this setup could enable the smartphone to serve as the interface between the vehicle and the driver in – and outside – of the car."

It also appears to preclude the fitting of an airbag in the center of the wheel, its usual location for the driver's seat. But, no matter, it's a concept.

The most factual part of a presentation that included the words "transformative" and "disruptive" more times than attendees could count proved to be the platform architecture. Faraday's release said:

The VPA will enable FF to minimize production costs, deliver exceptional quality and safety, dramatically increase its speed to market, and could easily support a range of vehicle types and sizes....

The skateboard-style chassis can be adjusted by changing the lengths of the rails and other relative structures to accommodate the number of battery strings per each configuration.

There are structural benefits to the design as well, such as larger crumple zones that improve safety by centralizing and protecting the battery pack.

While the modular chassis itself was shown only in onscreen renderings, Faraday groups its cell modules into "strings" that can apparently be slotted between rails in a pack that can vary in length as needed.

It's worth noting, however, that a modular set of structural underpinnings is hardly a new concept. Volkswagen Group expects to build up to 4 million vehicles a year on its MQB transverse front-engine architecture, for instance.

Nick Sampson, Faraday senior vice president of R&D and product development, led off the event by noting that the company aims for a complete "rethink" of what mobility means in the automobile industry.

He attributed its ability to achieve its ambitious goals to four factors: an "amazing team" recruited from Audi, Boeing, BMW, Ford, GM, Jaguar, Lotus, and Tesla among others; a "transformative vision"; "incredible alliances," including one with Chinese LeTV; and, finally, "we are very fast."

Also presenting at the event was Ding Lei, listed as a company co-founder and the global vice chairman and managing director of See Plan and LeTV.

Ding was previously president of Shanghai-GM, a joint venture between one of China's largest auto companies and General Motors.

He told the story of a famous Chinese woodcarver who, at the end of his life, was consumed with guilt over the 100,000 trees he had cut down in his work--and vowed to plant 100,000 new ones.

Ding said he personally realized that the cars he had helped build "produce pollution every day," whereas Faraday's cars had no emissions at all.

The SEE Plan, he said, is a project to create a Super Electric Ecosystem that will use electric drive, in smart cars that connect over the Internet, to build a connected system that would allow users to socialize based on active sharing.

How this might work in action wasn't entirely clear, although "entertainment content" appeared to be a piece of it--not surprising given its connection to the LeTV network, widely viewed as "the Netflix of China."

"We have come," Ding concluded, "to change and create the future."

Sampson wrapped up by noting that Tesla Motors--which he called an inspiration and innovator to which we should all be grateful--had been founded back in 2003. It took that company nine years to roll out its first volume car, he said.

Faraday, he said, has only existed for 18 months.

In that time, it has developed the battery-electric vehicle architecture and hired more than 550 people in California and another 200 globally. (At least one of those employees, its chief battery architect Porter Harris, has left FF after joining just three months after it was founded, according to The Financial Times.)

It has also committed to build a billion-dollar assembly plant outside Las Vegas that will cover 3 million square feet and eventually employ 4,500 workers.

And, Sampson said, it will launch its first production vehicle "within two years," or by January 2018 at the latest.

What that vehicle will be was only hinted at by a pair of images quickly flashed on the screen in videos played during the presentation.

Both the wireframe and the shadowy rendering appear to show a sleek, fastback utility vehicle. Beyond that, the company offered no details.

And in making its debut not with the volume vehicles it hopes to produce but an extreme supercar concept that may never be built, Faraday made an odd choice and perhaps muddled its messages.

Love it or hate it, the design of the FFZERO1 will get the company lots of attention--but to what end?

The company has not yet revealed what vehicles it will build; what customers it hopes to sell them to; whether they'll be bought, shared, or rented; and how it intends to make money on a sustainable basis.

All of which led one analyst to suggest that the entire presentation was "the world's most elaborate sales pitch" for further funding--which Sampson says Faraday will pursue--or an outright sale.

In the cold light of day, the company's confident claims and hugely ambitious schedule bring to mind other recent electric-car startups, one of which has made quite a splash and some others that haven't.

And the tenor of Monday night's event begs the question: Is Faraday the next Tesla ... or the next Fisker?