The need to increase electric-car ranges and decrease charging times has led to huge amounts of research into improved battery chemistries.

But why stop at the stuff that goes into the battery? Why not change the battery itself?

Scientists at UCLA's California NanoSystems Institute says they have developed a hybrid device that goes beyond simple changes in cell chemistry.

The experimental device combines the energy density of a lead-acid battery with the quick charge and discharge rates of a supercapacitor.

It's six times as energy-dense as the average commercial supercapacitor, according to research published in the journal Proceedings of the National Academy of Sciences (via Gizmag).

That combination of qualities has great potential impact for electric cars. It would theoretically offer more compact energy storage and faster charging without sacrificing range. 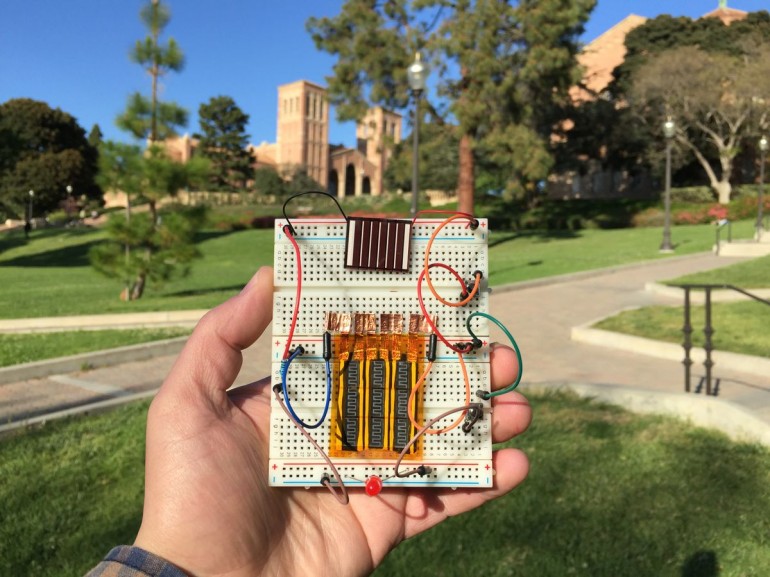 Researchers claim the version being tested can hold twice as much charge as a typical thin-film lithium battery--but on a surface one-fifth the thickness of a piece of paper.

This performance was reportedly achieved by maximizing the contact area between the electrolyte and the two electrodes.

Those electrodes are made from manganese dioxide, but feature a three-dimensional laser-scribed graphene (LSG) structure.

The graphene structure is highly conductive, and has greater surface area than previous designs.

Supercapacitors are usually stacked on top of each other and packaged as a unit, but the researchers decided to take advantage of their device's thin design and try something different.

The test version is attached to a solar array, absorbing energy from its cell during the day, and discharging it at night--to light an LED.

In addition to its energy density and quick charging properties, researchers believe the compactness of what they call a "microsupercapacitor" could be a major selling point as well.

Among potential applications, they see it being used in bandages to release doses of medication.

MORE: Will Ultracapacitors Save Start-Stop Systems From Consumer Wrath? (Sep 2014)

All of the device's properties could be useful in electric cars as well, but that's purely theoretical right now.

As with all experimental technologies, it's important to note that promising lab results don't always translate into commercial viability.

Still, in the quest to find a solution to electric-car range and charging issues, it's probably worth looking beyond the battery.