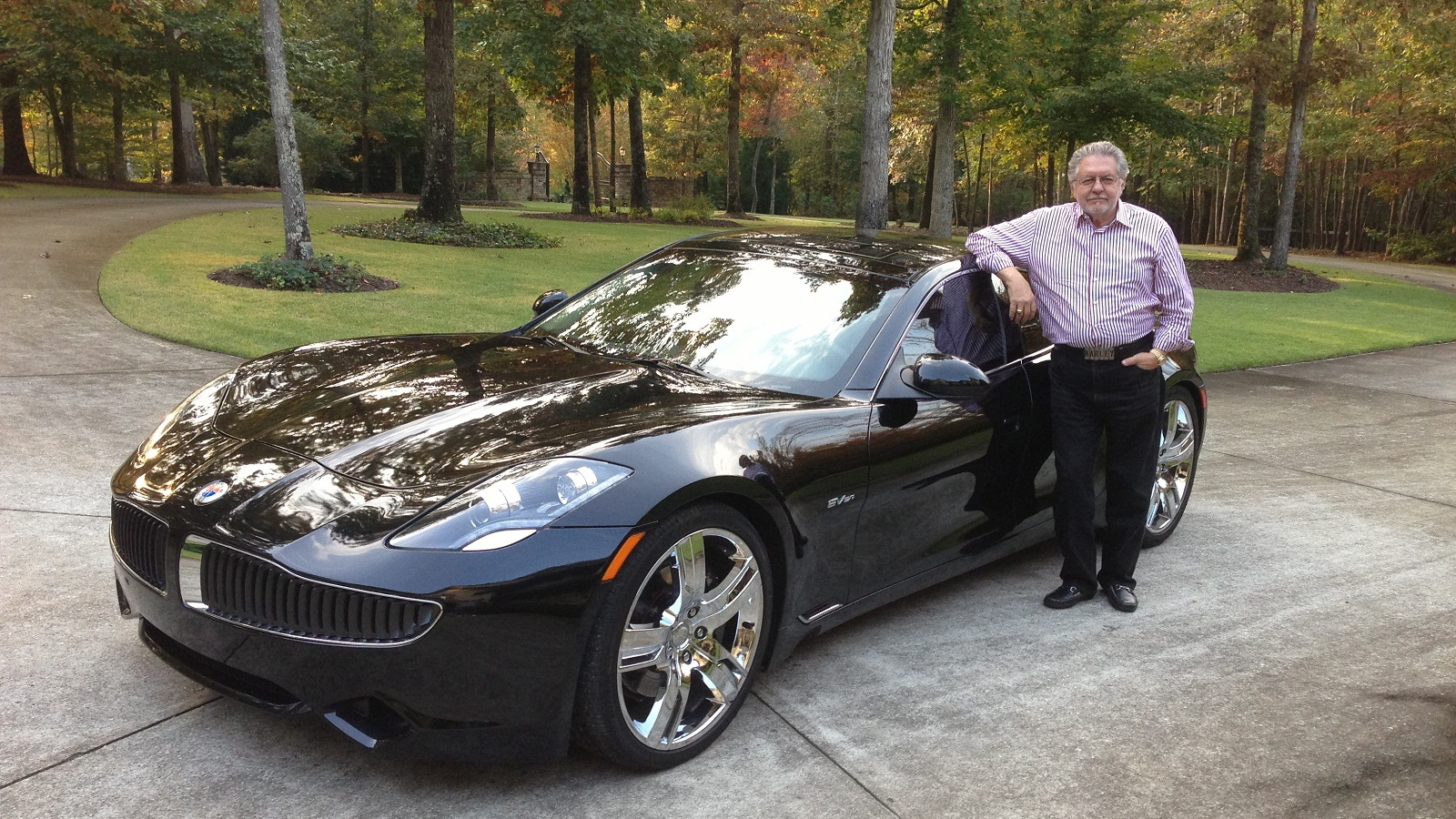 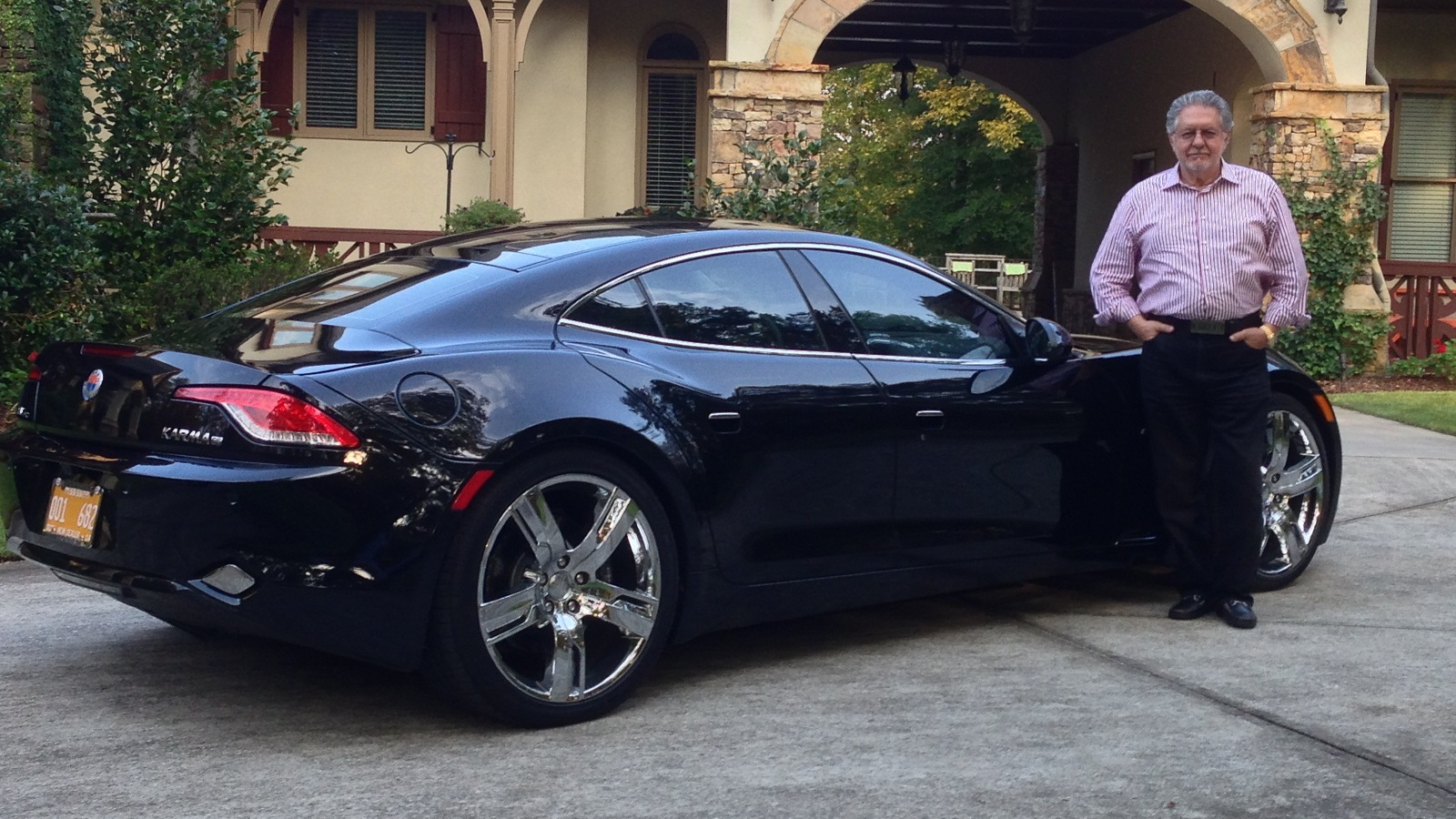 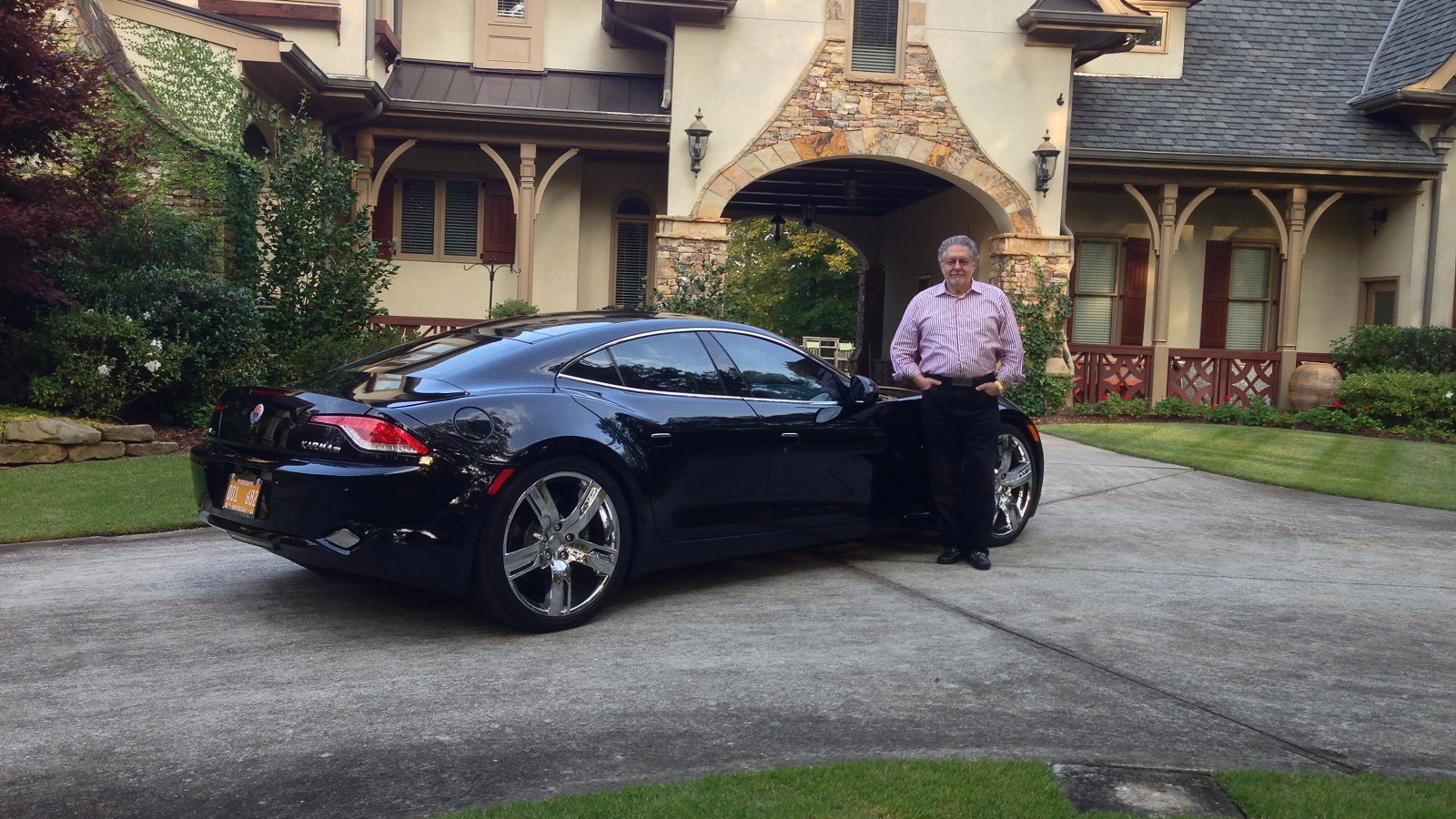 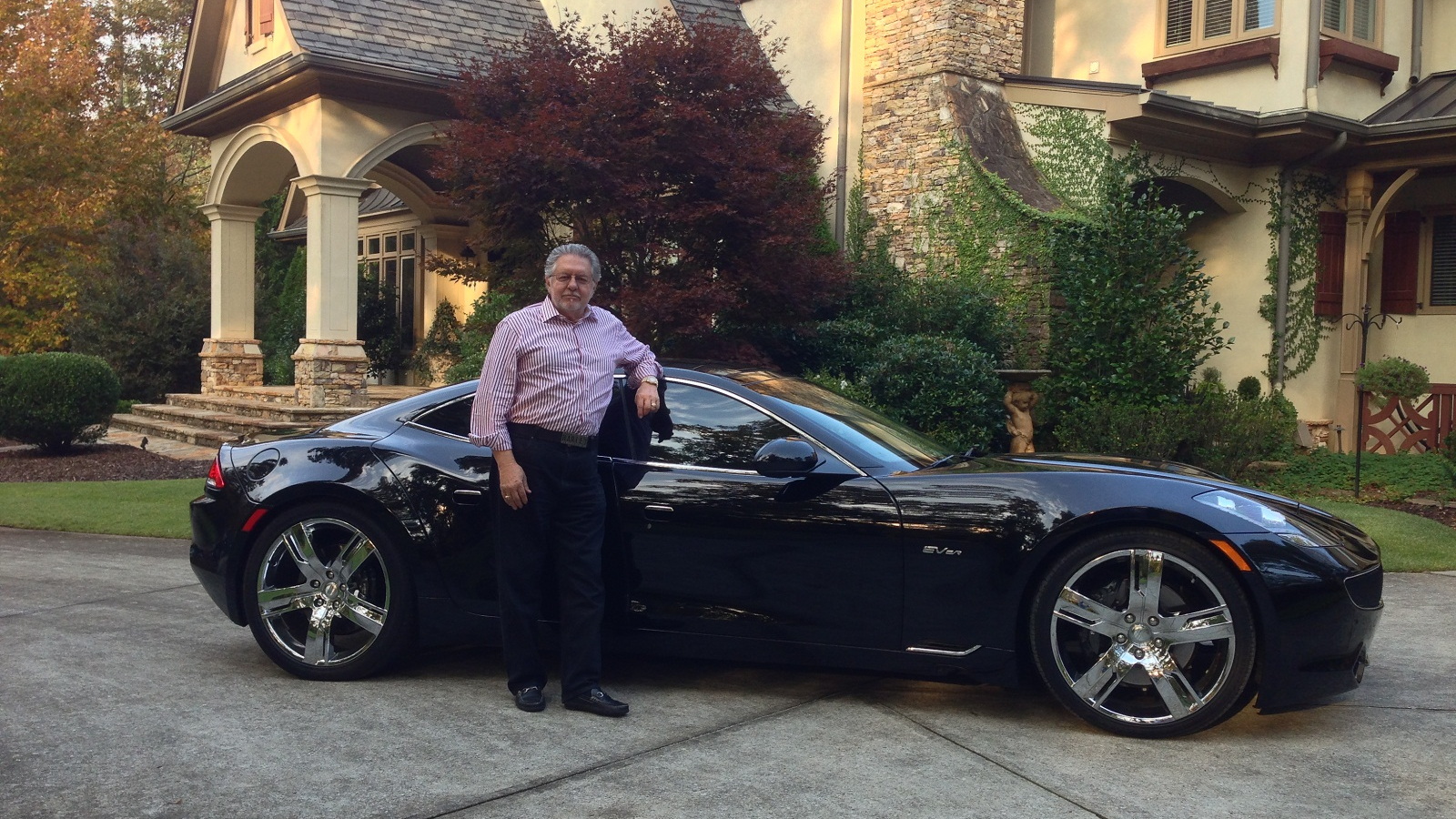 The 2012 Fisker Karma remains a stunning car, regardless of its range-extended electric powertrain.

While the struggling-though-not-yet-bankrupt company remains in limbo, with a purchase reported but not yet confirmed, it hasn't built cars since July 2012.

The 2,500 or so Fiskers out there may be the only ones that are ever built.

So what leads someone to buy a brand-new Fisker Karma, given the company's travails and the possibility that parts and service will be challenging in the years to come?

Oh, and birthdays too.

We interviewed two new Fisker owners, Amanda Pearson and Meurice Lefevre, who bought their Karmas in the last several weeks.

Pearson is an entrepreneur in Sandy Springs, Georgia; Lefevre is a real-estate investor and owner of two Harley-Davidson dealerships who lives in Alpharetta, Georgia.

Both buyers purchased their Karmas through Greg Dudevoir of Fisker of Atlanta.

We asked each of them the same questions; here's what they told us.

How did you initially find out about the Fisker Karma?

Pearson: I saw the car while driving down I-85 in Atlanta in October 2012. I was in awe at the sheer elegance and beauty of the car. It was truly love at first sight. I slowed down, tried to commit the name on the back and as many details as I could to memory. That night, I described it to a parking valet and he told me it was a Fisker Karma.

Lefevre: I'm a car nut, and I've been a fan of Henrik Fisker's work since the Fisker Coachwork days, when he re-bodied Mercedes-Benz SL and BMW 6-Series models to make the Fisker Tramonto and Latigo, respectively. I read about the Karma before it happened, and I even drove a pre-production model when it came to Atlanta.

What did you find most compelling about the car?

Pearson: The stunning design and elegant lines, plus the environmentally conscientious engineering and design details. It was such a rare, unique combination.

Lefevre: I can't claim I'm big into gas mileage. It's the best-looking sedan I've ever seen, just a gorgeous car.

When did you buy the car, and how long did it take you to decide?

Pearson: It took me almost a year to buy the car from the first time I saw it. I knew I must have one literally when I first saw it, but it took almost a year to research and purchase. I would have bought much sooner, but the controversy made me hesitant during the spring and summer months this year.

I thought I would wait to see how the dust settles, but ultimately I could wait no longer: I had to have one before all the new inventory was depleted, which is what I feared when I saw prices starting to drop. Also, I had a birthday coming up--and I couldn't think of a better gift to myself! I took the car home on September 12.

Lefevre: My intention was not to buy during the first year of production, but that changed when it turned out there wouldn't be a second year. All my cars are black, so I wanted a black Fisker, and I wasn't interested in a used one. But Fisker of Atlanta didn't have one in black that hadn't been driven, and my wife and I went back and forth on the bronze and blue ones. I was ready to buy the bronze one after I saw it on the road one morning, but when I went down after church, it had just been sold.

Finally, the dealership put the owner's car--which was black--up for sale, all cleaned up. They added chrome-plated factory wheels, did all the service updates and modifications done--and it only had 800 miles on it. My wife bought it for me on my 76th birthday, on September 20.

Lefevre: $68,300 before the Federal income-tax credit.

What's your initial impression now that you've lived with the Karma for a while?

Pearson: The car is everything I expected and more. I recently took it to the mountains of Tennessee, and I've never had so much fun driving the switchbacks up and down the mountain. It's truly an exhilarating car to drive.

I will say that anyone who plans on purchasing a Karma should be prepared for a few quirks with the electronics, i.e. the touchscreen sometimes freezes up and other little quirks occur. Most resolve themselves when you restart the car, but it is something to note and I've had to do a hard reset here and there to clear a quirk.

I had researched the car before my purchase, and there's a wealth of honest and accurate information on the Fisker Buzz site, so I knew what to expect. Plus the Fisker community is very knowledgable and extremely helpful. If ever I have questions, if the answer isn't already out there, I simply ask and--sometimes within minutes--one of the trained Fisker technicians will have an answer.

Ultimately the quirks don't bother me at all when I consider that it's the most enjoyable car I have ever driven.

Lefevre: After 1,100 miles, I love it! It doesn't have the fit or finish of a Bentley or a Rolls-Royce; the panels don't fit together that well. But stand 10 feet back, and it's the prettiest thing I've ever seen.

I run it 25 or 30 miles on electricity, then then use Sport mode to turn on the engine. I plug it in overnight on the 110-Volt charger.

It's very comfortable once you get into it, and it handles great--though it's not as fast as I'm used to. But I've had zero problems, and a friend who's got 9,000 miles on his Fisker hasn't had any problems either.

How do people react to seeing your car?

Pearson: Although Greg Dudevoir had told me about the response I would get, I wasn't prepared. I call it the Fisker Effect: I am literally stopped by people everywhere I go, asking questions about the car and taking pictures. I am frequently boxed in on the highway by people taking pictures with their phones. I've been asked to pull over or flagged down at stop lights to answer questions. Mostly: "What is that!?"

People are fascinated by the car and I completely understand. I am still struck by the presence of the Fisker Karma--and I own one!

The most memorable Fisker Effect for me: I recently drove the car to Abingdon, Virginia, and parallel-parked on the main street. While I was in a boutique, I saw there was a traffic back-up as people slowed down to look and take pictures while they drove by. When I came out to put bags in the car, I noticed several camera phones flashing in the windows of restaurants, and 8 or 10 people actually came out of stores and restaurants to ask questions about the car.

Some gentlemen asked if they could shake my hand, younger teens asked for high fives. We were all laughing and having fun. Everyone wanted to take pictures and see inside the car. It was surreal how the car caused all that. I love spreading the word about the car, and don't mind the questions or people wanting to take pictures at all.

Lefevre: People take pictures on their phones all the time on the freeway. It's an attention magnet. People crowd around it, they don't know what it is--and when I say it's electric, some people say, "Oh, Tesla!"

When they see the car, their mouths just drop open. I'm very happy with it.

Do you worry about the car potentially becoming an "orphan" if the company doesn't get back on its feet?

Pearson: Although my initial concerns about the "orphan" potential delayed my purchase, ultimately that became less of a deterrent and more of a draw for me. The opportunity to be an original owner of what is already a very rare and stunning car appealed to me.

With a continued increase in electric-powered vehicles entering the market, I'm convinced that technology and resources will continue to be available for maintenance and repair. Also, there are Fisker-certified technicians who will travel to Fisker owners to do repairs or modifications.

In the end, I'm content either way the pendulum swings. If Fisker rises like the phoenix, then great: I get my warranty and the benefit of continued evolution and updates to the car. If it doesn't, then I now own a stunning and notable piece of automotive ingenuity and history.

Lefevre: Not at all. I'm very happy, and so far it hasn't needed any service. It was worth the gamble. Even if I had to get rid of the car tomorrow, I figure I could get $45,000 or $50,000--and it would be worth every penny of the money I paid just to have driven it and had so much fun in these five weeks.

Fisker of Atlanta is still a dealership and has a service department [unlike other dealers, which have closed entirely]. They have factory-trained mechanics and a stock of parts, though they say they can't get every single part.

[NOTE: Answers have been edited, condensed, and reworded where necessary for clarity.]