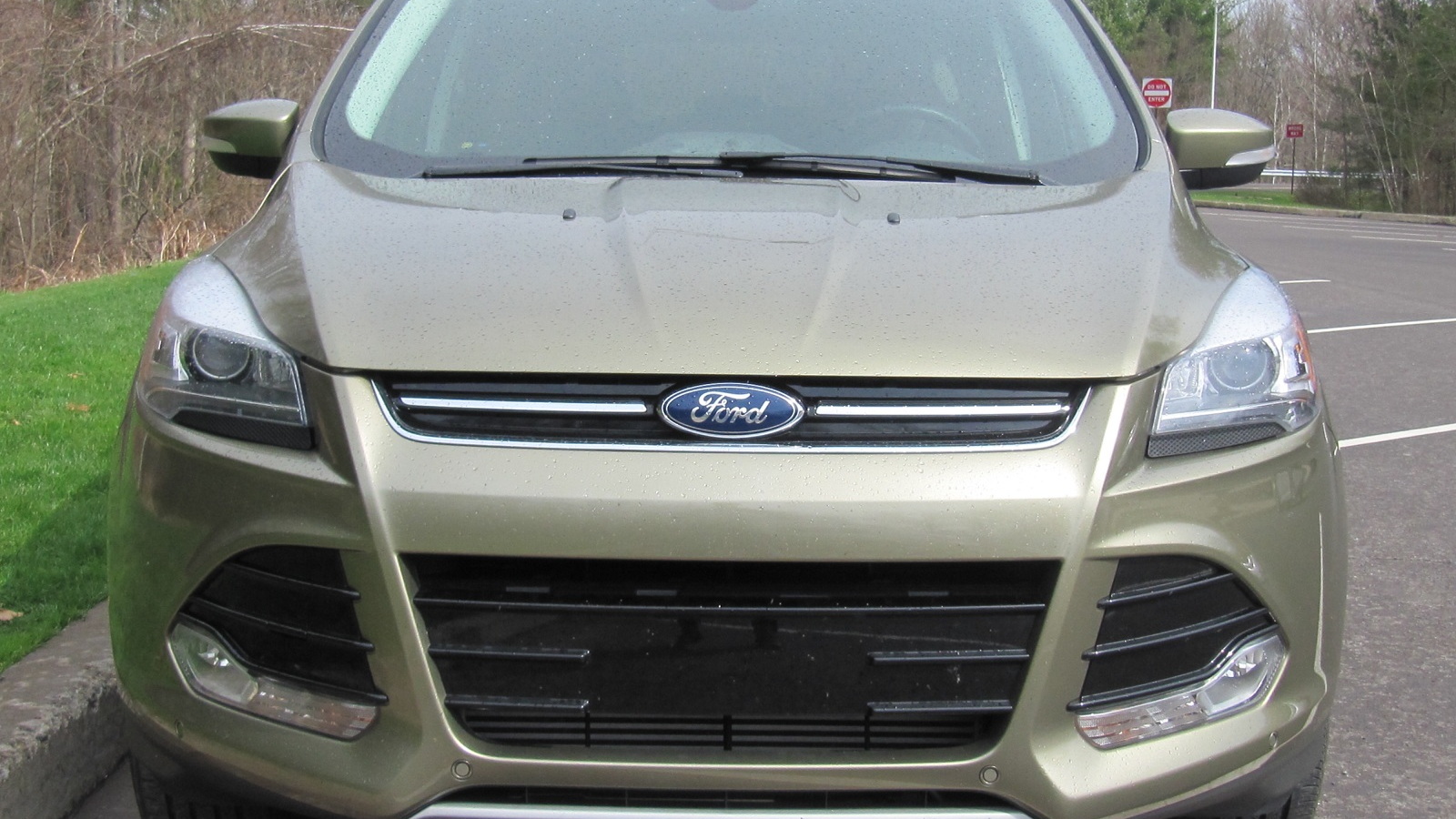 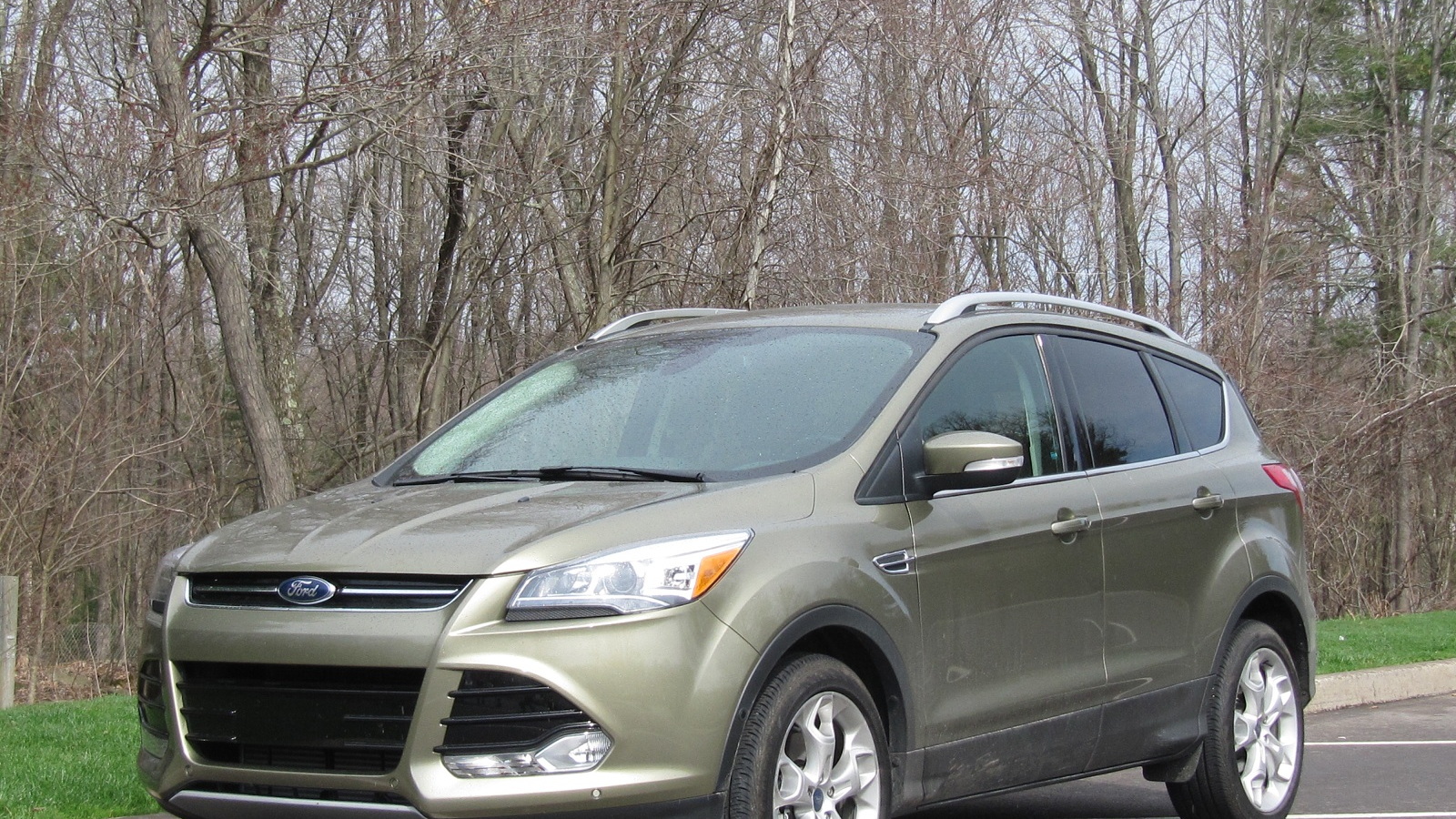 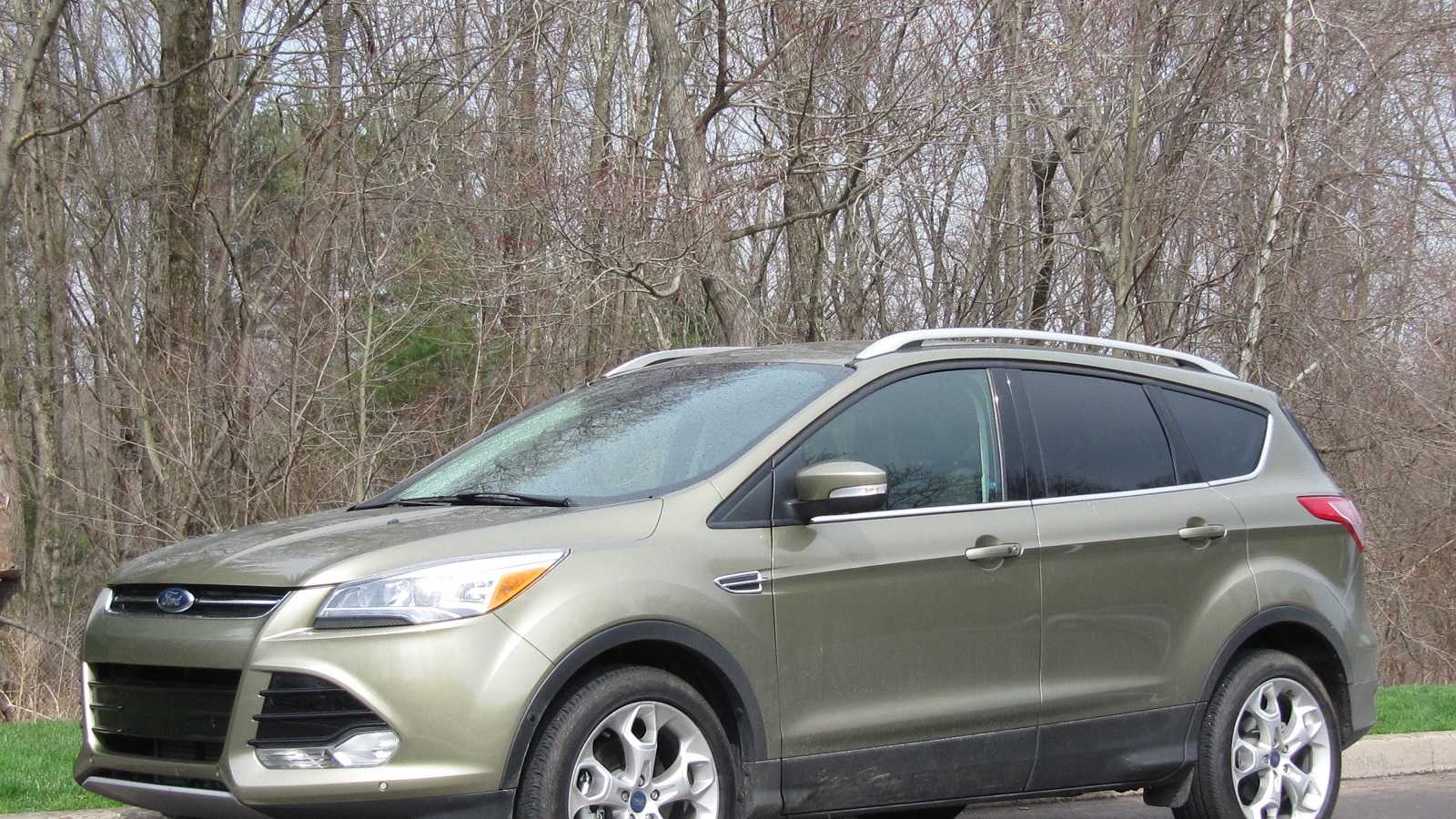 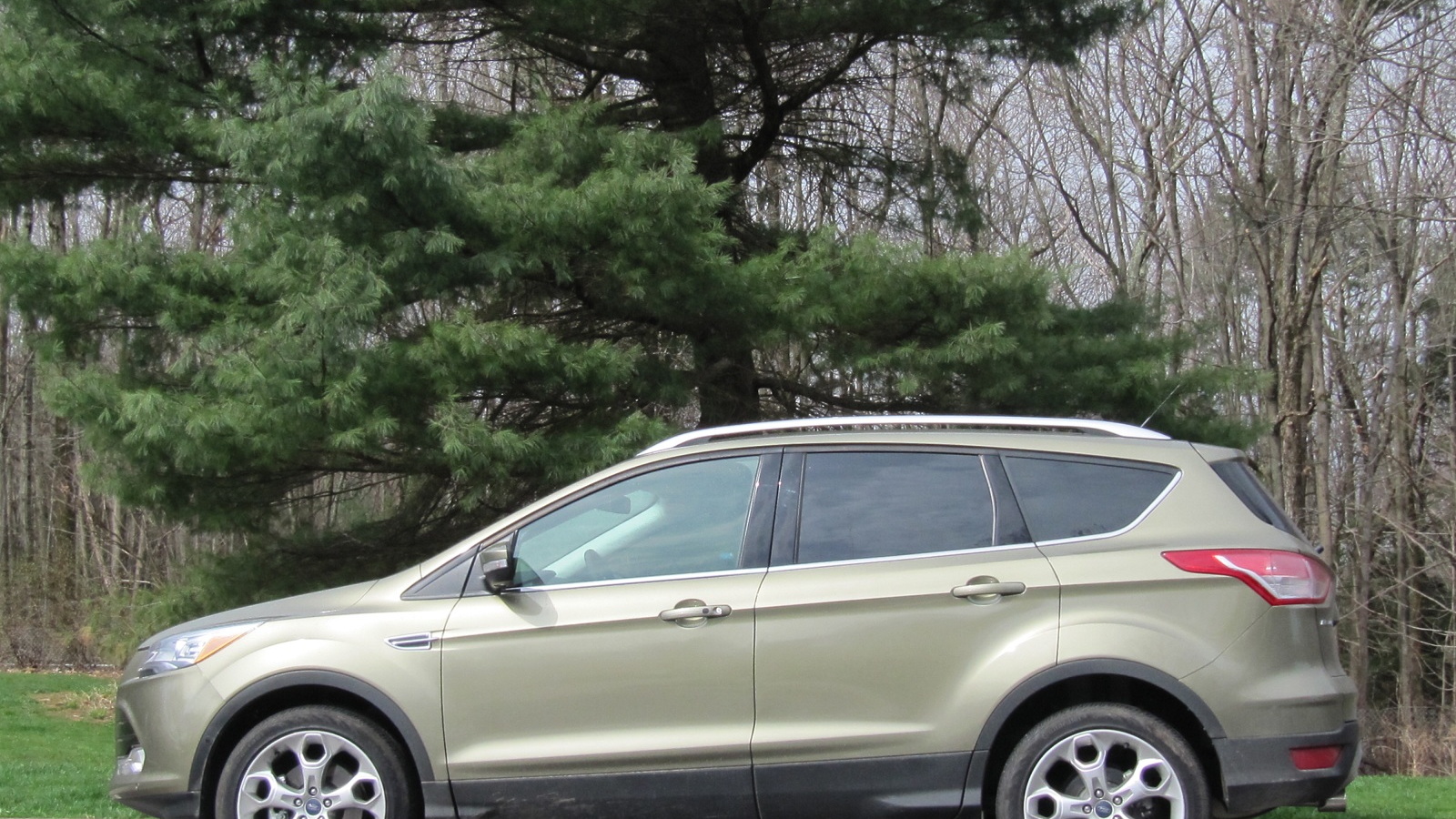 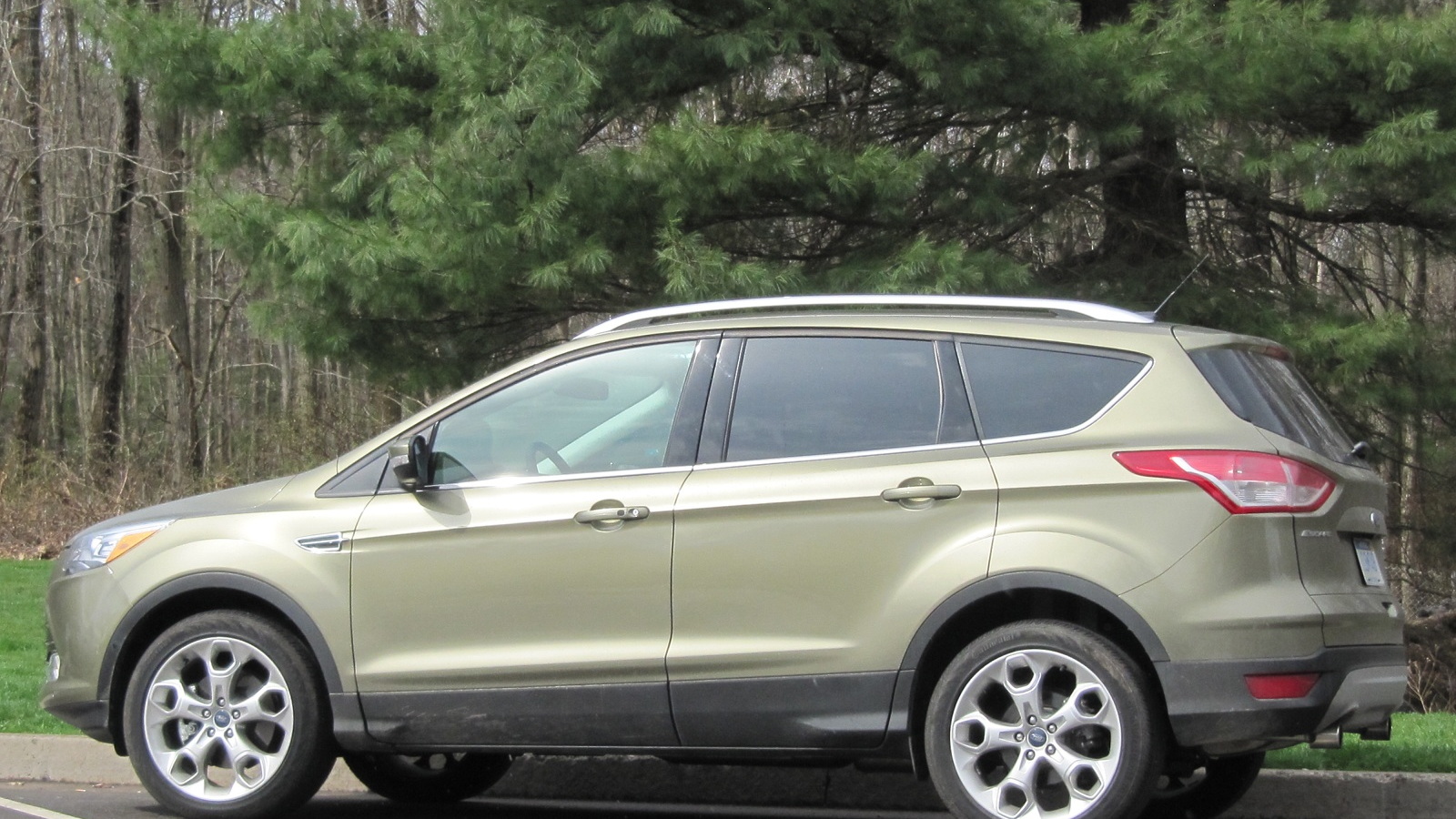 The Ford Escape is one of the most popular compact crossovers on the market today, and its all-new 2013 model goes head-to-head with the Honda CRV and Toyota RAV4.

Both of those vehicles were redesigned in 2012 or 2013, so crossover competition is now fierce.

This is the top-of-the-line Escape, with a sticker price of almost $35,000--against the starting price of $23,365 for the almost nonexistent 2.5-liter Escape base model.

After surveying a number of auto writers, it appears that in many cities (including ours), Ford only gives out the nicest, priciest Escape models for media drives.

So right now, our gas mileage test only applies to this engine and drive configuration. We hope to test lesser Escapes in the future.

The most fuel-efficient Escape is the front-wheel drive model with the 1.6-liter EcoBoost engine, rated at 26 mpg combined.

Of course, those numbers are nothing like the 32 mpg combined rating of the late, lamented Escape Hybrid (the front-wheel drive model), which went out of production after the 2012 model year.

Over the course of an 838-mile trip that took us through five states, we pretty much nailed the EPA combined rating.

We got 23. 9 miles per gallon, though during most of our fairly hilly trip, the reading was not that good.

But three solid hours of Interstate cruising on flat roads with a net downslope back to our sea-level destination boosted the recorded mileage enough to where we'd deem the EPA's rating of 24 mpg combined a reasonable expectation.

(Unlike the 47-mpg combined ratings in Ford's newest C-Max and Fusion hybrids. But that's another story.)

Filling up HOW often? 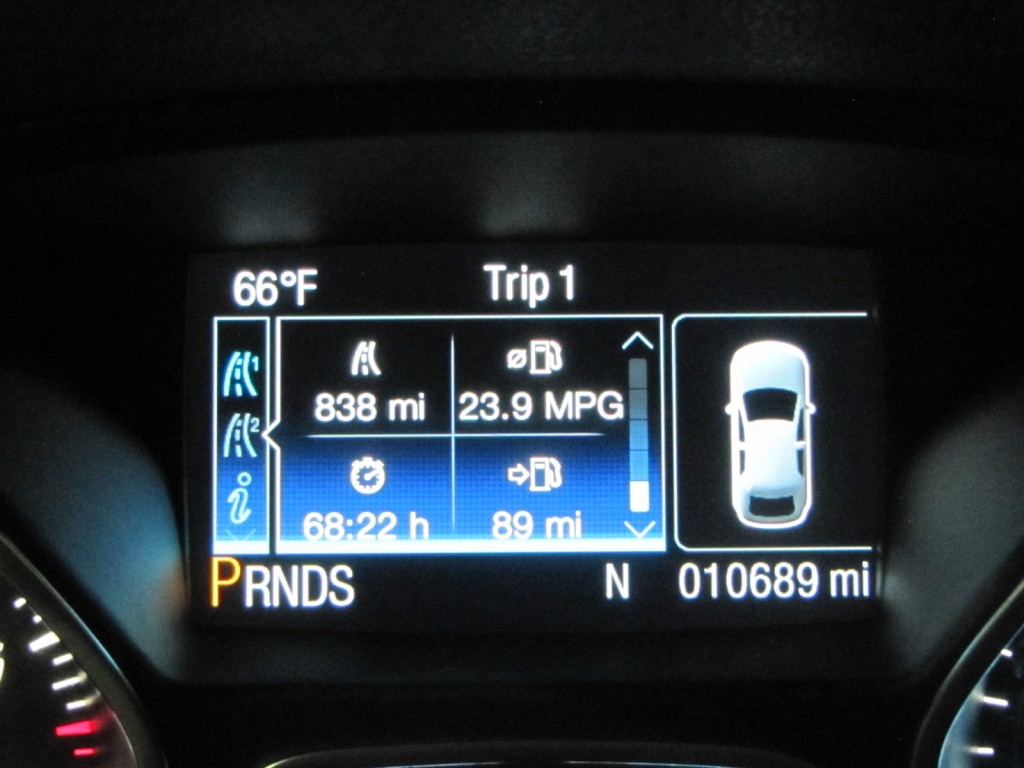 The "low gas" warning light went off the first time with 246 miles on the trip odometer--and we'd received the car with a full tank indicated.

Yes, we know there's a lot of leeway between the time the light goes on and the last drop in the tank. But still: 250 miles between fillups? RLY?

The 2013 Ford Escape is listed as having a 15.1-gallon tank, which would provide roughly 350 miles of range.

That's among the smallest in compact crossovers, but perhaps Ford has programmed its low-gas light to be exceptionally conservative.

In our 800-plus-mile trip, we put gas in the Escape three times.

You have been warned.. 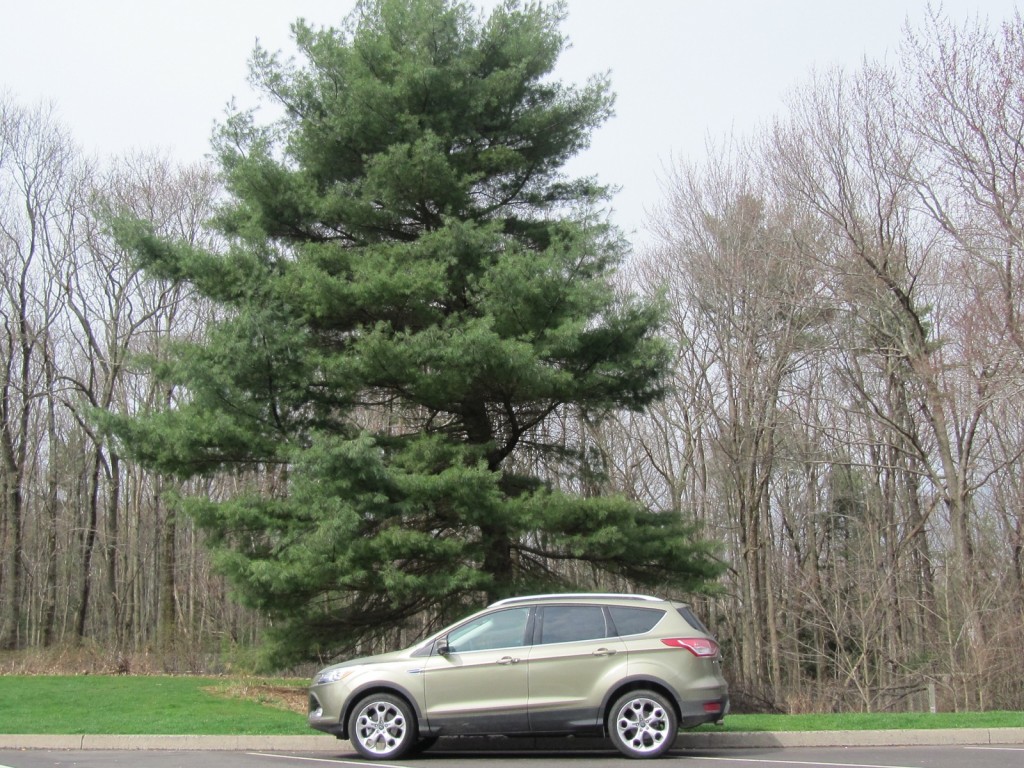 Frequent fillups aside, the 2013 Ford Escape proved to be a comfortable and up-to-date vehicle in which to cover lots of miles.

The cloth-and-leather seats in our Platinum model were both attractive and comfortable over our longest day.

The seat heaters, on the other hand, were so aggressive that we couldn't endure more than about 10 minutes even on the lowest setting. That, we suspect, is very much a First World Problem.

The interior mixes soft-touch and harder plastics, but is very similar to that of the C-Max we'd already driven (which is built on similar underpinnings), so it was familiar and worked well.

We give Ford credit for retaining a round volume adjustment knob for the radio rather than pushbuttons. The Escape also has knobs for the climate control system, so raising and lowering the temperature is similarly easy and intuitive.

We were disappointed with how little storage space was available on the console for our sunglasses, change, toll tickets, mobile phones, and the like.

It handles nicely and we found it relatively pleasant to toss around curvy country roads, although it sits high, meaning you have to get comfortable with the sensation of more body roll than you would in a sedan.

The electric power steering was about average; not as good in feel as the stellar system in the Mazda CX-5 (still our favorite crossover for driver experience and roadholding), but better than almost anything that Toyota makes.

One unusual feature of the engine noise was that on occasion, the engine stayed at lower speeds (well below 2000 rpm) when we'd have expected the six-speed automatic transmission to have downshifted.

Instead, we heard it making a low-pitched growling noise--today's equivalent of what older drivers used to call "lugging" the engine.

The car responded fine, and shifted down if we accelerated, but the noise was just enough to be noticeable--yet another side effect of stretching for every last tenth of a mile per gallon, we suspect.

The C-Max Hybrid uses active noise cancellation to offset similar sounds in that car, but the Escape does not.

One final note on gas mileage: The Escape 2.0-liter produces good mileage numbers on level ground, but keeping your foot into it predictably cuts efficiency a lot.

On the first part of our trip, running up and down the hills of central New York State, we rarely saw even 20 mpg. Once we hit freeways, the numbers slowly rose.

The 2.0-liter Escape Titanium model with all-wheel drive carries a base price of $32,120.

Included as standard are the Titanium technology package, a tonneau cover over the load bay, the roof rack, high-intensity discharge automatic headlamps, the neat power liftgate, and rear sensors to compensate for the lack of rear visibility and aid in parking.

But our 2013 Ford Escape Titanium 4WD had a bottom-line sticker price of $34,735. That represented the addition of a $795 package that bundled MyFordTouch, SiriusXM satellite radio, and a navigation system, and another $995 for the parking technology package.