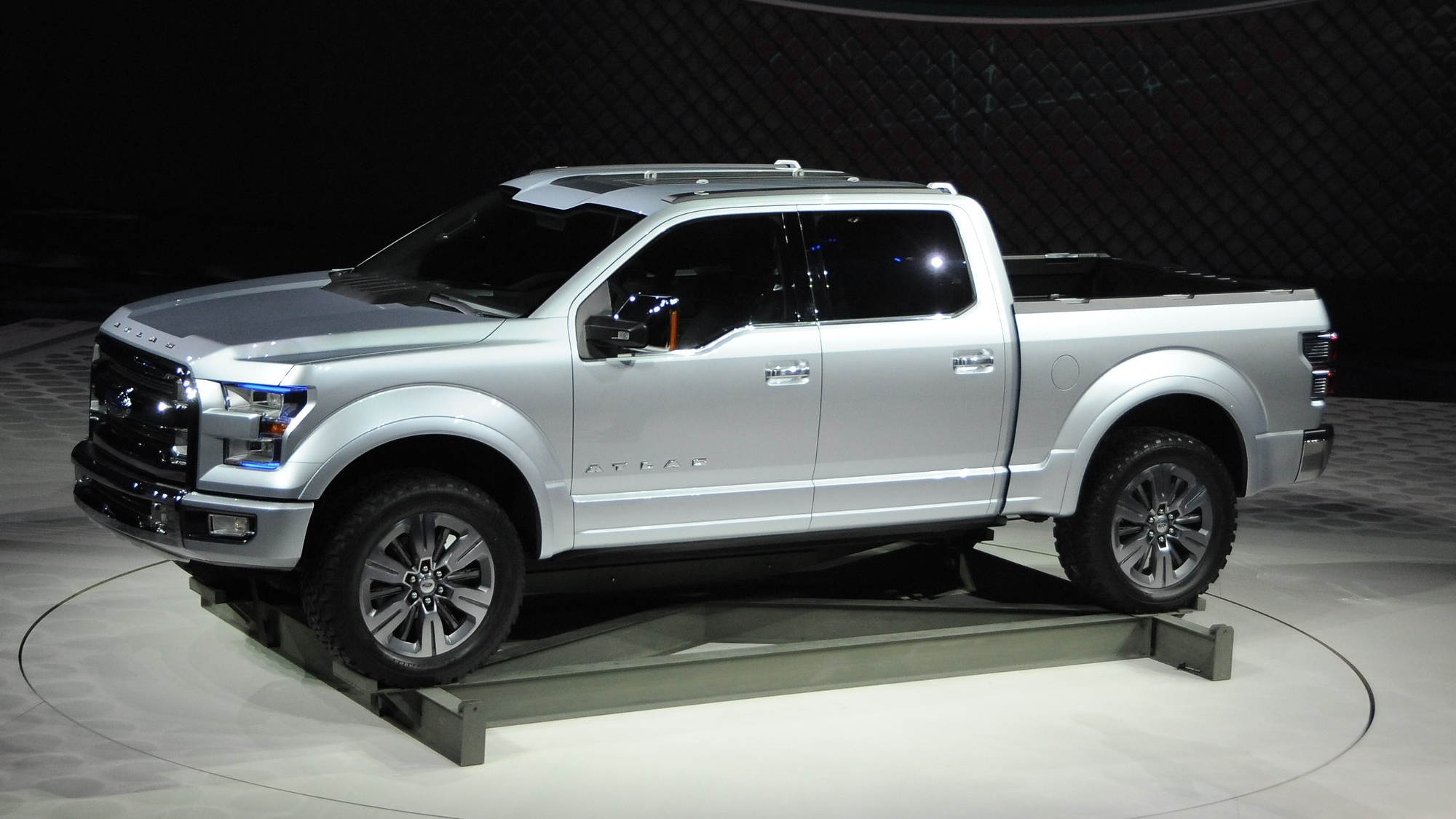 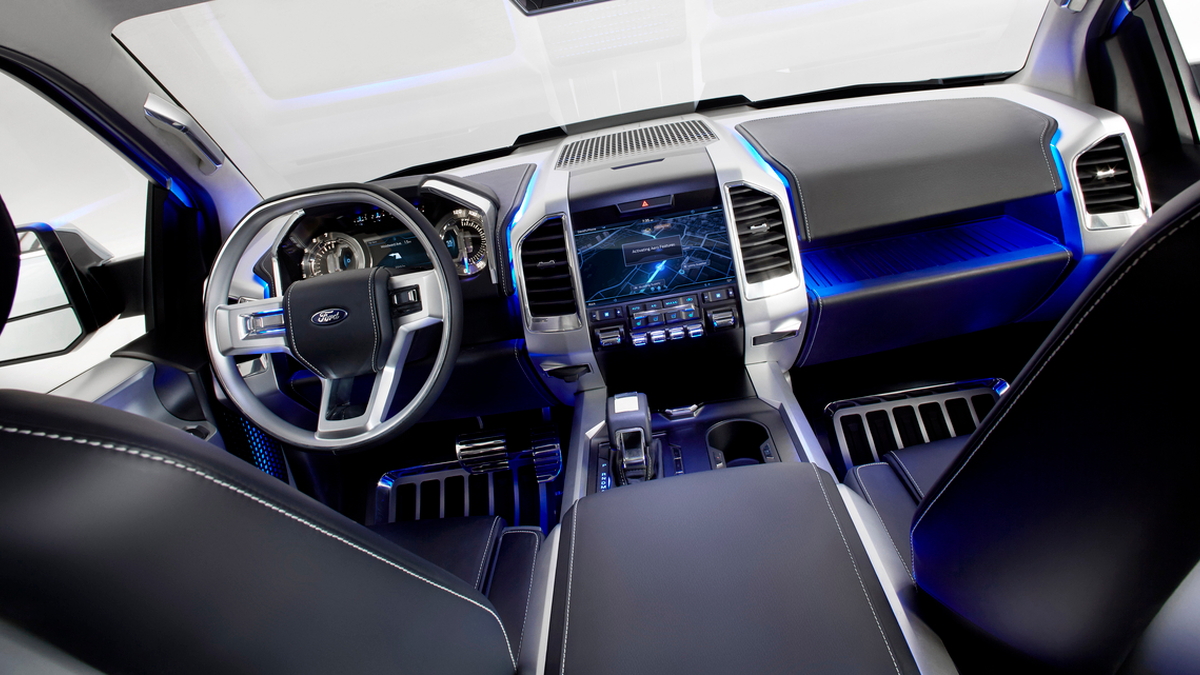 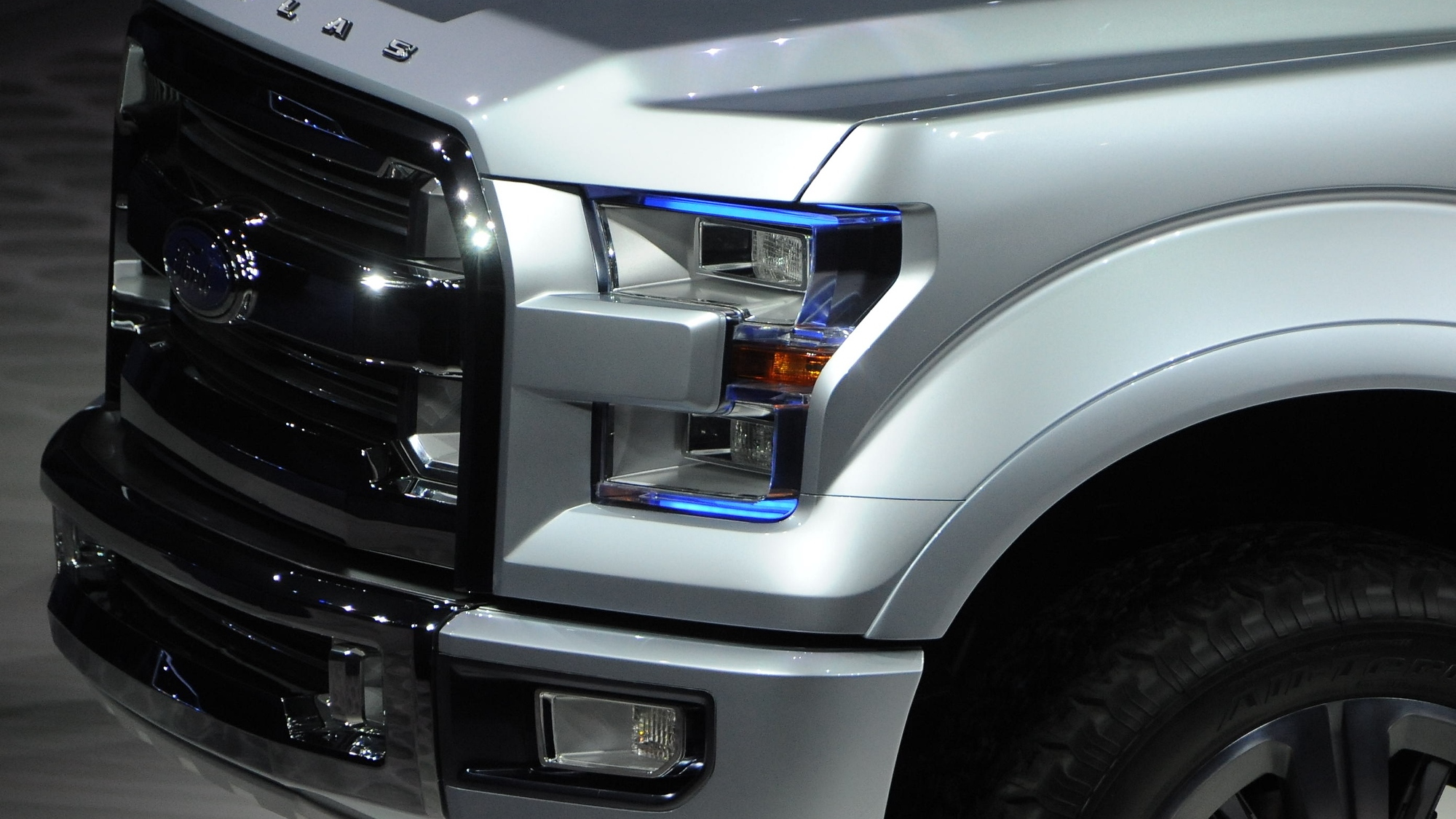 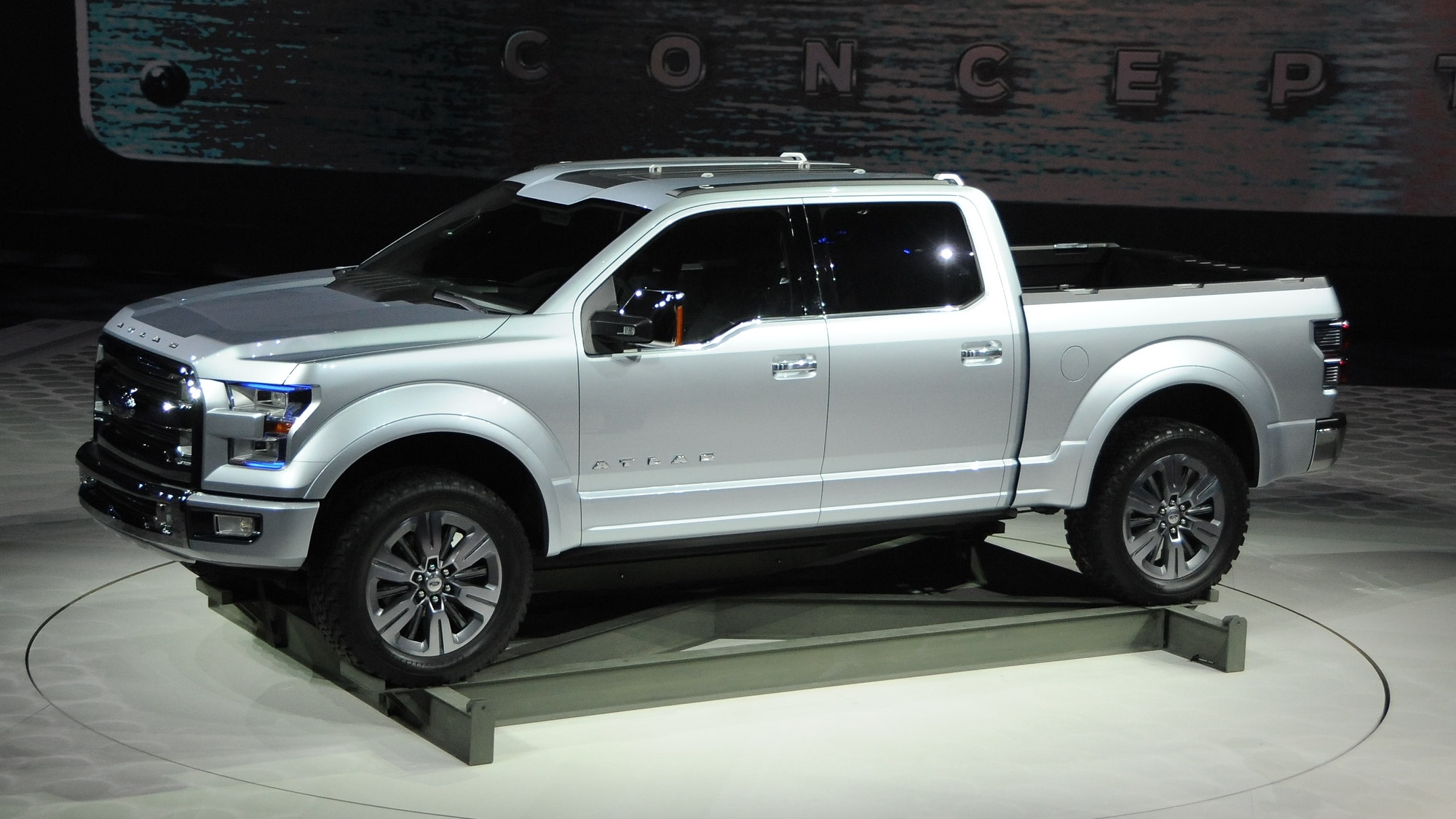 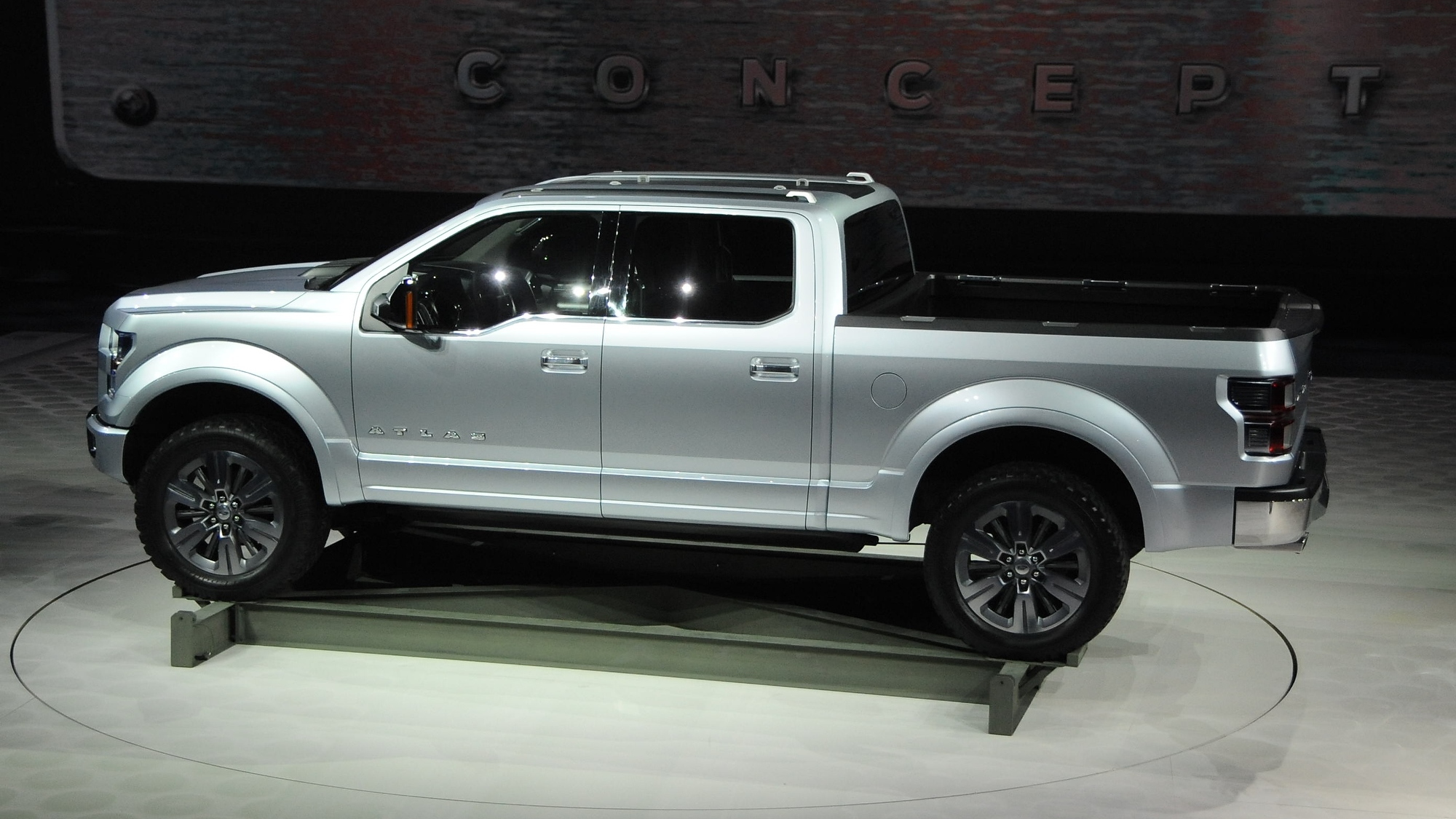 What remains in looking ahead to Ford’s future trucks are questions about greener powertrains, advanced materials, and the platform itself. Will Ford migrate to an all-aluminum or mostly aluminum structure, or one with more lightweight materials? And what about electrification? And if it’s committed to expanding the mileage and capability of its EcoBoost V-6, as it also mentioned for the Atlas, what about a hybrid or plug-in hybrid F-150?

Those are questions we asked VP Raj Nair, Ford’s global product development chief, out on the floor of the Detroit Auto Show.

“The way it’s trended on the passenger side gives you some hints on where it would go on a truck as well,” said Nair of hybridization or electrification—which perhaps hints that if Ford unveils a hybrid or plug-in, it would first be for the smaller Transit Connect or Transit Connect Van.

This fits in alongside Ford’s passenger-car and crossover strategies, in which it will soon have Hybrid and Energi (plug-in) versions of both the Ford Focus and Ford Fusion, as well as the 2013 Ford Focus Electric. Starting with the Transit Connect, which is perhaps more of an urban vehicle with shorter daily driving distances, might make more sense.

But at the same time, Ford is clearly also thinking about hybrids for larger light-duty trucks.

“We’ve said in the past we do expect an increase in electrification across segments,” added Nair. “For rear-wheel drive in particular we’re in some discussions with Toyota on where they think it’s going, where we think it’s going. and any joint opportunities with that.”

The Ford executive is referring to the memorandum of understanding that the company entered with Toyota Motor Co. in August 2011—applying to the development of hybrid systems for “rear-wheel drive light trucks and sport-utility vehicles.”

Such a system might measure up to the GM Two-Mode Hybrid system, which hasn't done well in the market and will be dropped from GM's re-engineered pickups, the 2014 Chevrolet Silverado and GMC Sierra.

While it might be some time before we see electrification in an F-150, we’ll almost certainly get next-generation EcoBoost engines, along with more advanced lightweight materials. But the claims last year from some sources, that Ford had locked onto plans to make the next-generation F-150 with an all-aluminum structure, might have been a bit premature.

“It’s too early to talk about any specific materials choices in the next generation,” said Nair, adding that they’re always looking ways to work more weight-saving materials like high-strength steel, boron steel, aluminum, or even magnesium into their vehicles—as well as carbon fiber, under an agreement with Dow. And on any material usage, there’s a lot of focus on raw materials, and whether they’ll make financial sense for the entire product cycle.

“Leveraging all of those in every program is key, as well as in the details of the engineering, making sure we’re really optimizing structures, using a lot of our new techniques, and almost working back from what would be the ideal structure, from a weight and load basis,” explained Nair. “And then working to get the production and manufacturing feasibility out of it.”

And if Ford does manage to find a place for a hybrid system in a few years, as well as a structure utilizing advanced materials, big pickups—the way Americans want them—could make a great leap in efficiency.