These days, most mainstream dealers and garages give you a courtesy , or loaner car while your own vehicle is being worked on.

If you’re lucky, you’ll be given a reasonably new demo car, or perhaps even a car comparable with your own.  More often than not, you'll end up with the garage's oldest, and smelliest car.

But what if you could get your first experience behind the wheel of an all-electric 2012 Nissan Leaf?

That’s the opportunity being given to Nissan customers in the U.K. right now, courtesy of a renewed push to sell the plug-in hatchback.

In a letter to all its customers--hat-tip to the author’s big sister--Nissan explains that it is offering all of its customers the chance to borrow a Leaf the next time their car is in the shop.

And it isn’t just Leaf customers, who some Nissan dealers offer electric loaner cars to. It’s anyone who brings a Nissan car in for a service.

“We’ve a few surprises lined up when you next service with your Nissan dealer--starting with an exclusive opportunity to experience the future of motoring first hand by having a Nissan Leaf, the world’s first 100% electric car, as your free courtesy car,” the letter explains.

Just like the U.S., sales of the all-electric hatchback haven’t been as high in the U.K. as Nissan would like. Offering customers the chance to drive one while theirs is being worked on is a smart sales move.

After all, with the Leaf now rapidly approaching its second birthday, Nissan is no-longer selling to early-adopters.

Instead, it has to sell the car to everyday car buyers, a much harder sales proposition than those who are already fans of electric car technology.

Moreover, Nissan’s offer means that customers who would never willingly drive to a dealer to test-drive a Leaf get the option of time behind the wheel.

Add the fact that there won’t be any pestering salesman sitting next to you as you drive the loaner car off the lot, and you have the perfect recipe for a real-world, unmoderated test-drive. 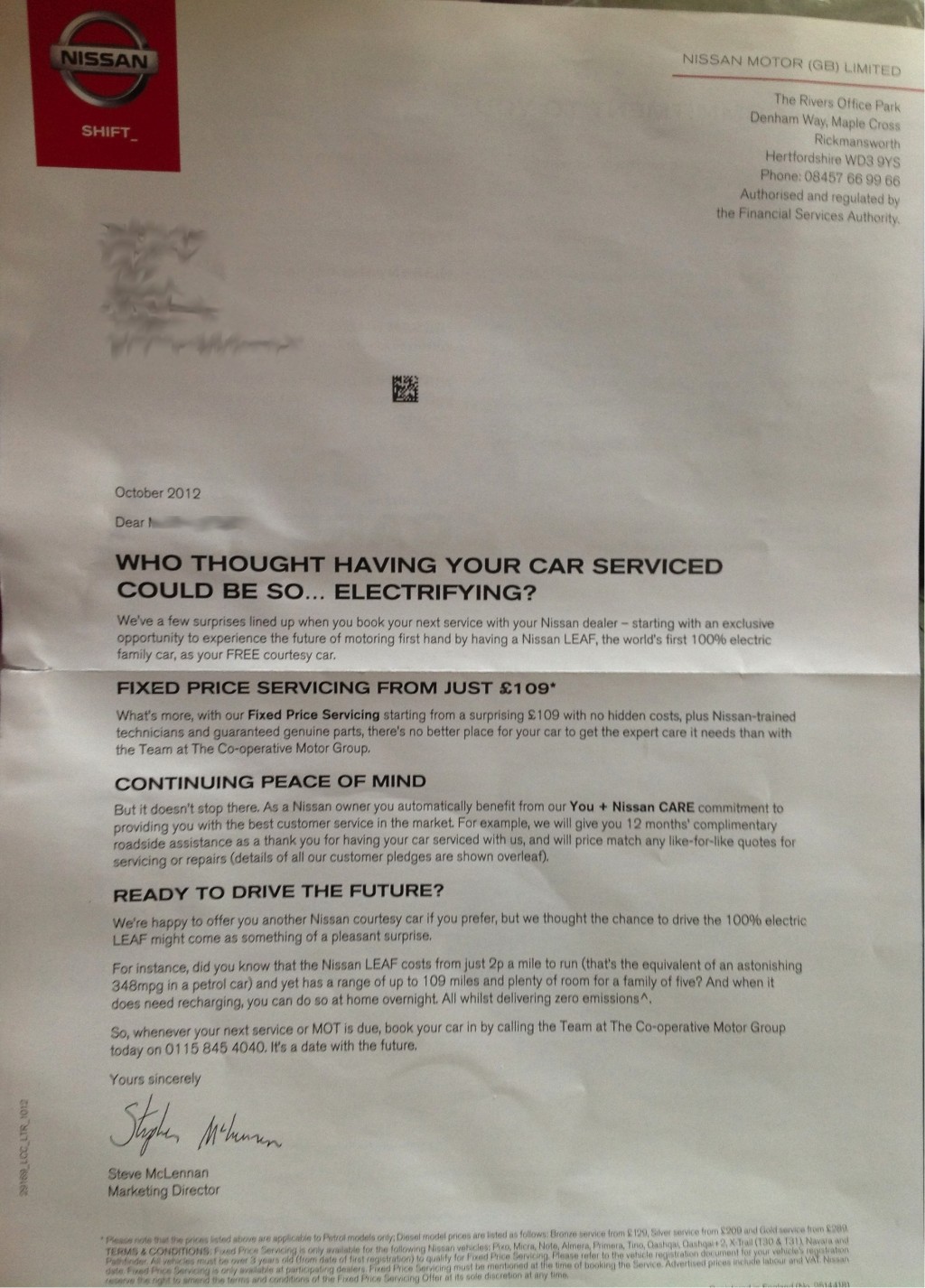 Borrow a Nissan Leaf while your car is in the shop.

But the automaker is keen emphasize it isn’t forcing customers to take a Leaf if they don’t want to.

“We’re happy to offer you another Nissan courtesy car if you prefer, but we thought the chance to drive the 100% Leaf might come as something of a pleasant surprise,” the letter continues.

At present, the offer only appears to apply to customers in the U.K., but would you welcome a similar practice in the U.S.?

Do you think regular, non-electric Nissan customers would take the opportunity?

And what will their reaction be?