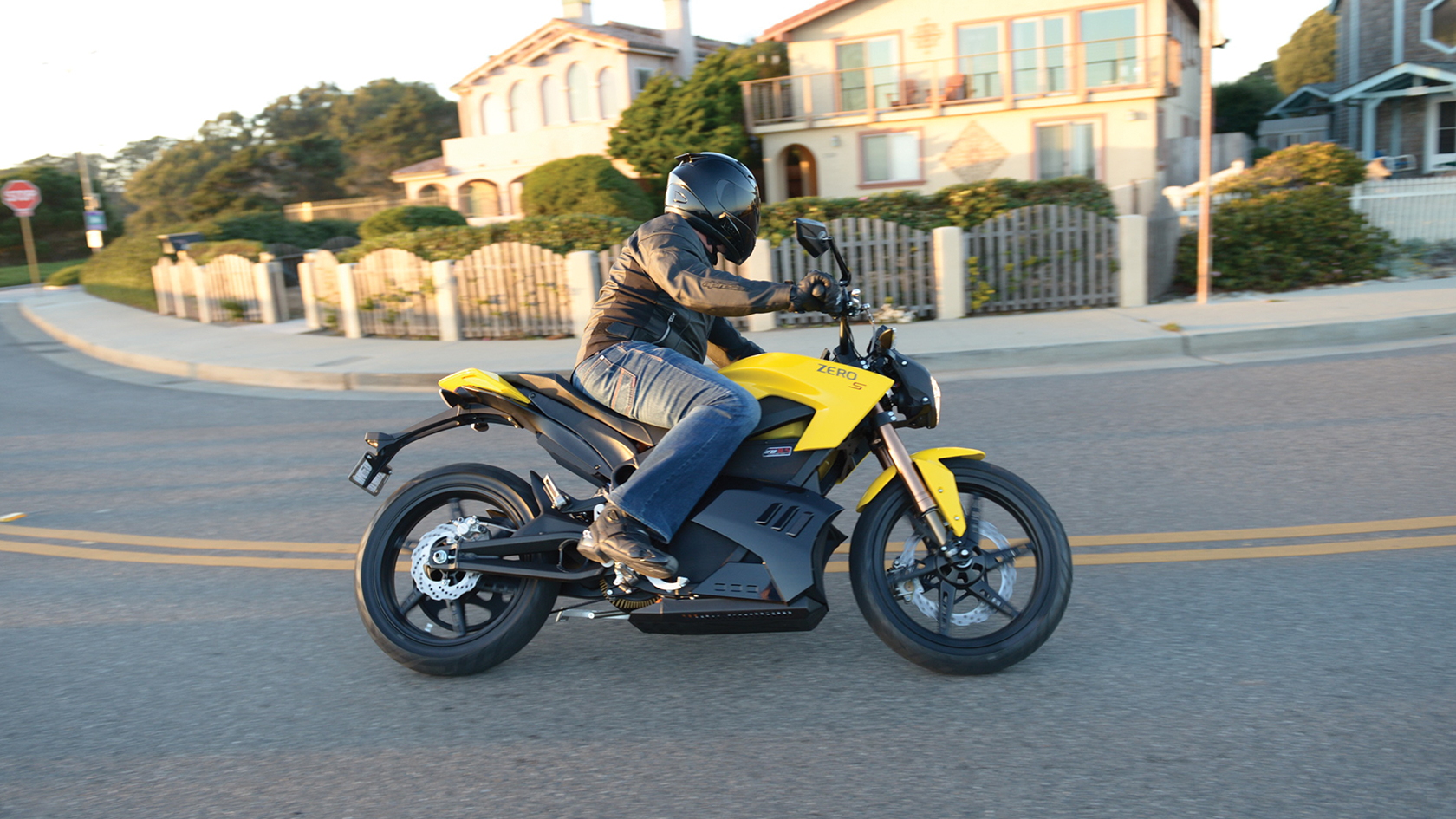 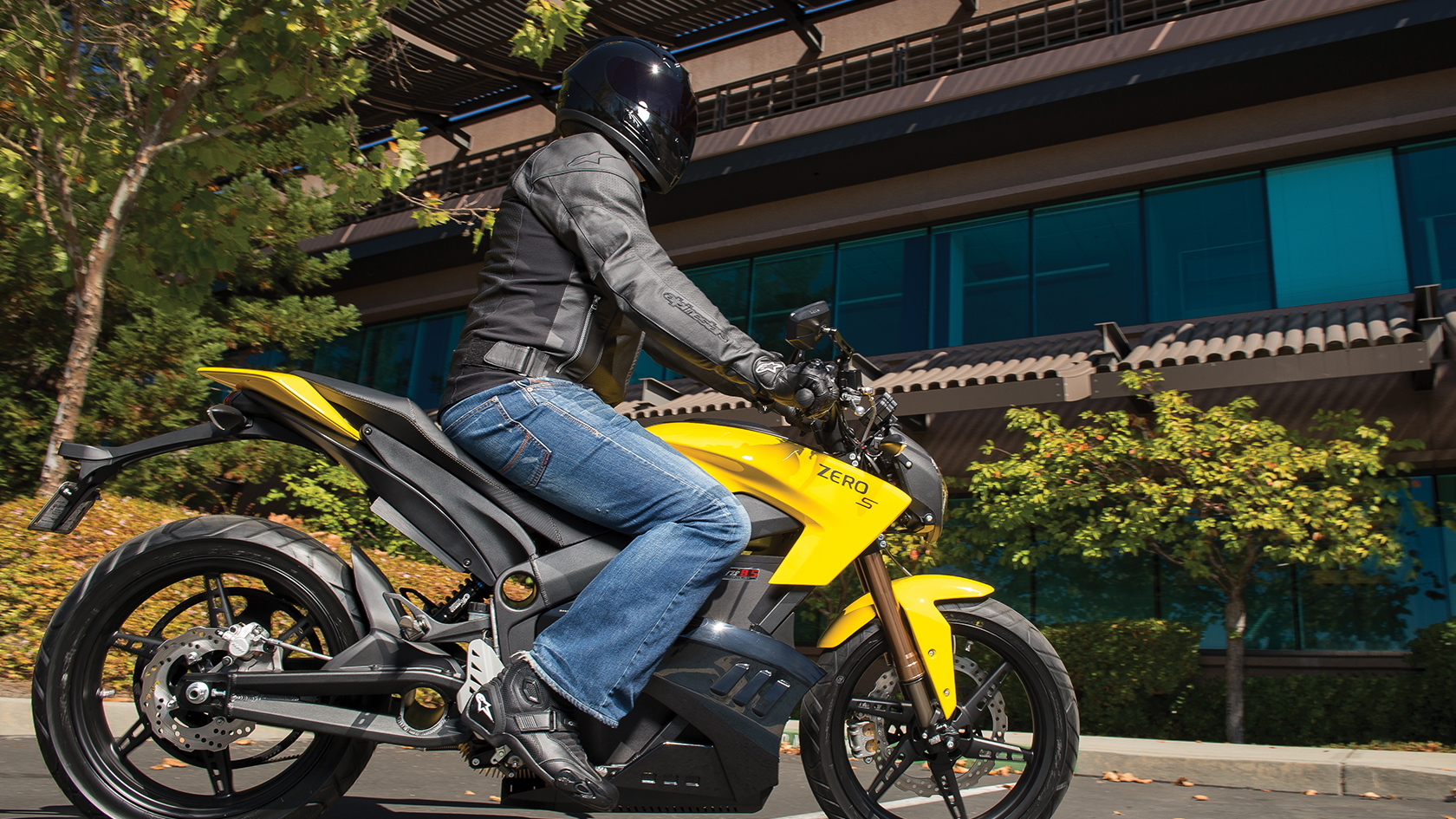 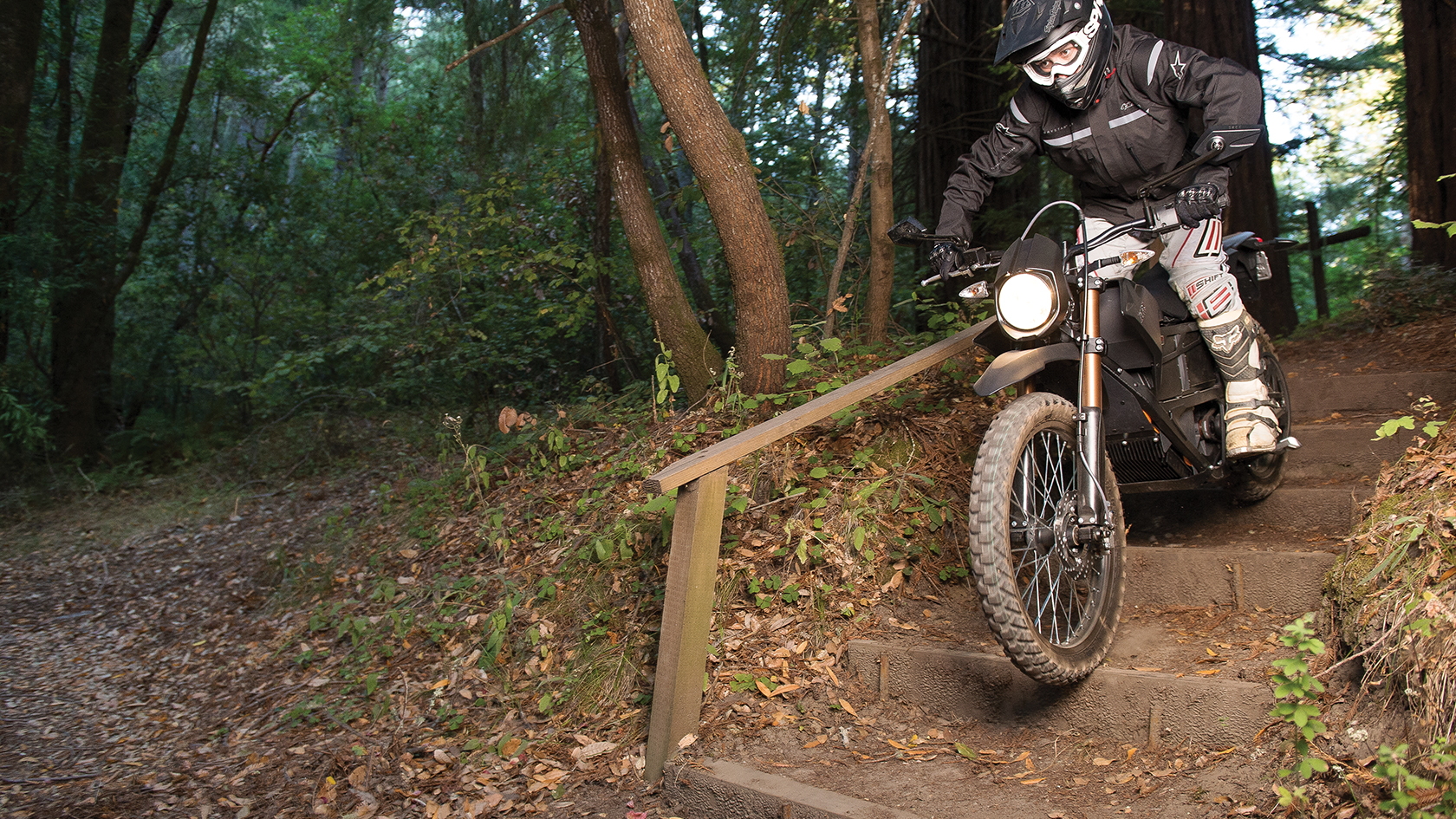 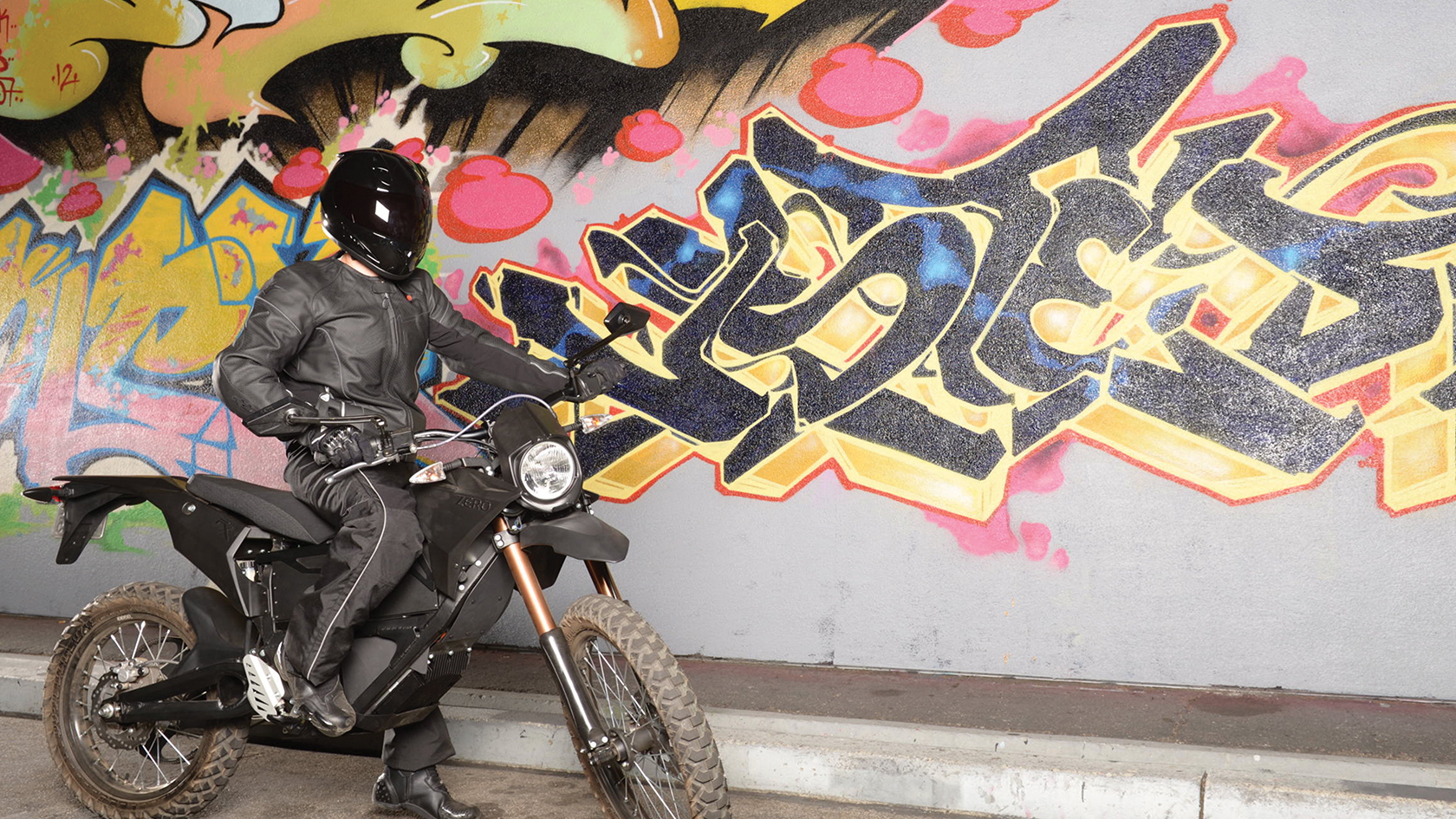 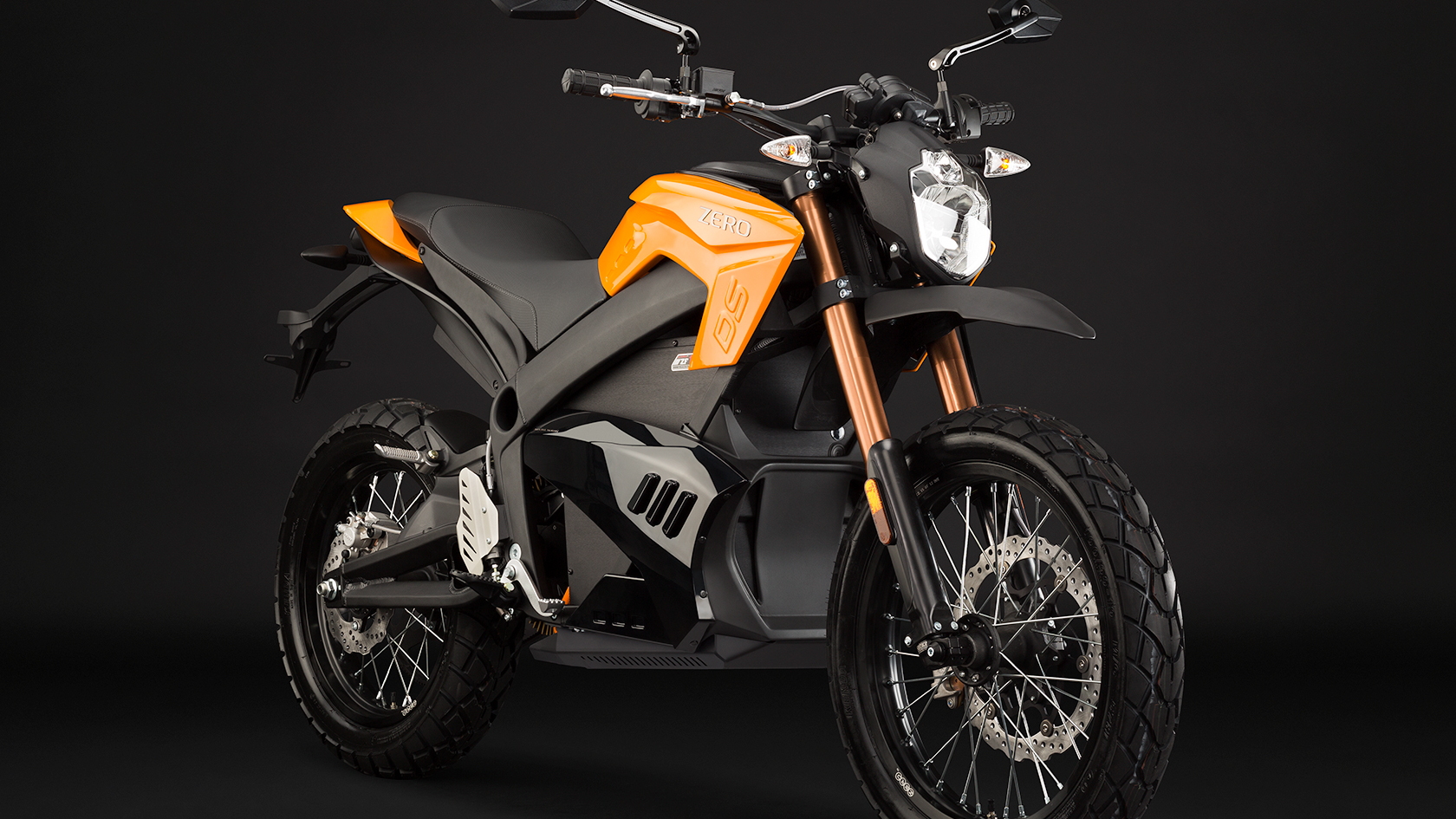 And, unlike many automakers and motorcycle companies, that means more than just a few new paint options and handlebar tweaks.

In fact, its entire range, from the motocross-ready Zero MX to its headline Zero S streetfighter, have been rebuilt from the ground up.

As a consequence, every one of Zero’s street-legal  motorcycles gets a bigger battery pack as standard, an improved, air-cooled motor, a higher top speed, an interactive smartphone app, and the ability to recharge to 95 percent full in under an hour using an optional Chademo charge accessory.

While the 2012 Zero S provided a competent around-town ride, and enough range to cover 100 miles, its stylings still leaned toward first-time motorcycle riders rather than hardened two-wheeled fans.

For 2013, that has changed with the introduction of a more traditional motorcycle design, with the area usually reserved for a fuel tank on a gasoline motorcycle doubling up as a storage area.

It also offers pillion capability for the first time as standard, with a new, two-tiered seat replacing the old, tired motocross-style flat seat of previous years.

Performance and range has improved too, with the 2013 Zero S capable of a maximum 40 kilowatts of power, and 68 foot-pounds of torque.  At the time of writing, Zero hasn’t disclosed a 0-60 time, but top speed has increased from 88 mph to 95 mph.

Range is also improved, thanks to a larger, 8.5 kilowatt-hour battery pack included as standard, or a larger, optional 11.4 kWh pack.

In mixed riding, Zero says the standard 8.5 kWh battery pack will provide 70 miles of range, while the larger, 11.4 kWh pack will yield 93 miles of mixed riding.

Stay in the city limits, and Zero claims the larger battery pack will give the 2013 S a range of 137 miles.

Historically, the Zero DS, or Dual Sport, has been the more adventurous, dirt-track-ready twin to the road-only Zero S.

That family tie has continued for the 2013 model, with the same enhancements found on the 2013 Zero S making their way over to the 2013 DS.

Thanks to a different suspension setup and broader handlebars, the riding position on the 2013 DS is more upright than its streetfighter sibling.

At 395 pounds with the 11.4 kWh battery pack fitted, the Zero DS is also 13 pounds heavier than a similarly-specced Zero S.

That extra weight has an impact on range, dropping it to 62 or 82 miles of combined riding and 95 or 126 miles of city riding, depending on the battery pack chosen.

With similar improvements in battery and motor technology to the rest of the range, the 2013 Zero XU becomes a serious commuter motorcycle for the first time.

Top speed has been improved from a rather unimpressive 65 mph to 77 mph, while a small 2.8 kWh battery pack provides enough range for a basic, 20 mile commute.

In fact, from a distance, the XU looks to have adopted the best parts of the outgoing 2012 Zero S, without compromising on the battery swap capabilities which made the original XU an ideal apartment-dweller’s electric vehicle.

Like its predecessor, riders can park up, and remove the 2.8 kWh battery pack, charging it away from the motorcycle. This makes it the motorcycle of choice for anyone wanting to switch to electric power, but who doesn't have a charging station nearby.

Failing that, the Zero XU’s compact dimensions and 218 pound weight make it easy to maneuver through doors and perhaps even into an elevator.

The 2013 Zero MX and its street-legal twin, the 2013 Zero FX, come as close to Zero Motorcycles’ motocross roots as it’s possible to be.

Designed for high acceleration and sporty performance, not range, the Zero FX Stealth Fighter uses the same electric motor found in the 2013 Zero S and DS.

But thanks to a smaller battery pack--which lowers the FX’s weight to 233 pounds-- and a few software tweaks, the Zero FX promises the “most basic and adrenaline-pumping” riding experience.

While both the 2.8 kWh model and the larger, optional 5.7 kWh battery pack configurations offer the same 85 mph top speed, the larger pack increases power output from 20kW to 33kW, making it the better choice for street-legal fun.

Designed just for the race track, the 2013 Zero MX lacks the necessary lights and other easily-breakable items found on street-legal motorcycles.

To make a case in point that this is its non road-legal model, Zero lists range in riding time, not miles.

Also new for 2013 on all Zero motocycles is a smartphone bluetooth facility that lets iPhone and Android users tweak elements of their Zero motorcycle’s riding characteristics from their phone.

When docked in a suitable cradle, riders can even use their smartphones as a secondary dash, providing additional information about their Zero motorcycle while in use.

Combined with optional Chademo rapid charging capabilities--providing a 95 percent charge at a rapid charging station in under an hour--this makes the 2013 Zero motorcycle range the most road-trip friendly of all electric motorcycles to date.

Good on paper, but expensive

If this preview of the 2013 Zero motorcycle range, due to hit dealers some time in January 2013, has you salivating in anticipation, you won’t be alone.

But while Zero has improved its entire range for 2013, it has also increased the price you’ll have to pay to buy one.

At $13,995 before incentives, plus shipping, handling and registration fees, the base level 2013 Zero S and Zero DS aren’t exactly cheap. Add a larger battery pack, and other optional extras, and you’ll find yourself creeping well over $16,000.

At $7,995 for the base-level Zero XU, Zero’s urban crossover is much more affordable. But like the rest of the Zero range, that price is before any incentives, shipping, handling and registration fees are taken into account.

Do you like the new Zero motorcycle lineup? Would you consider buying one?