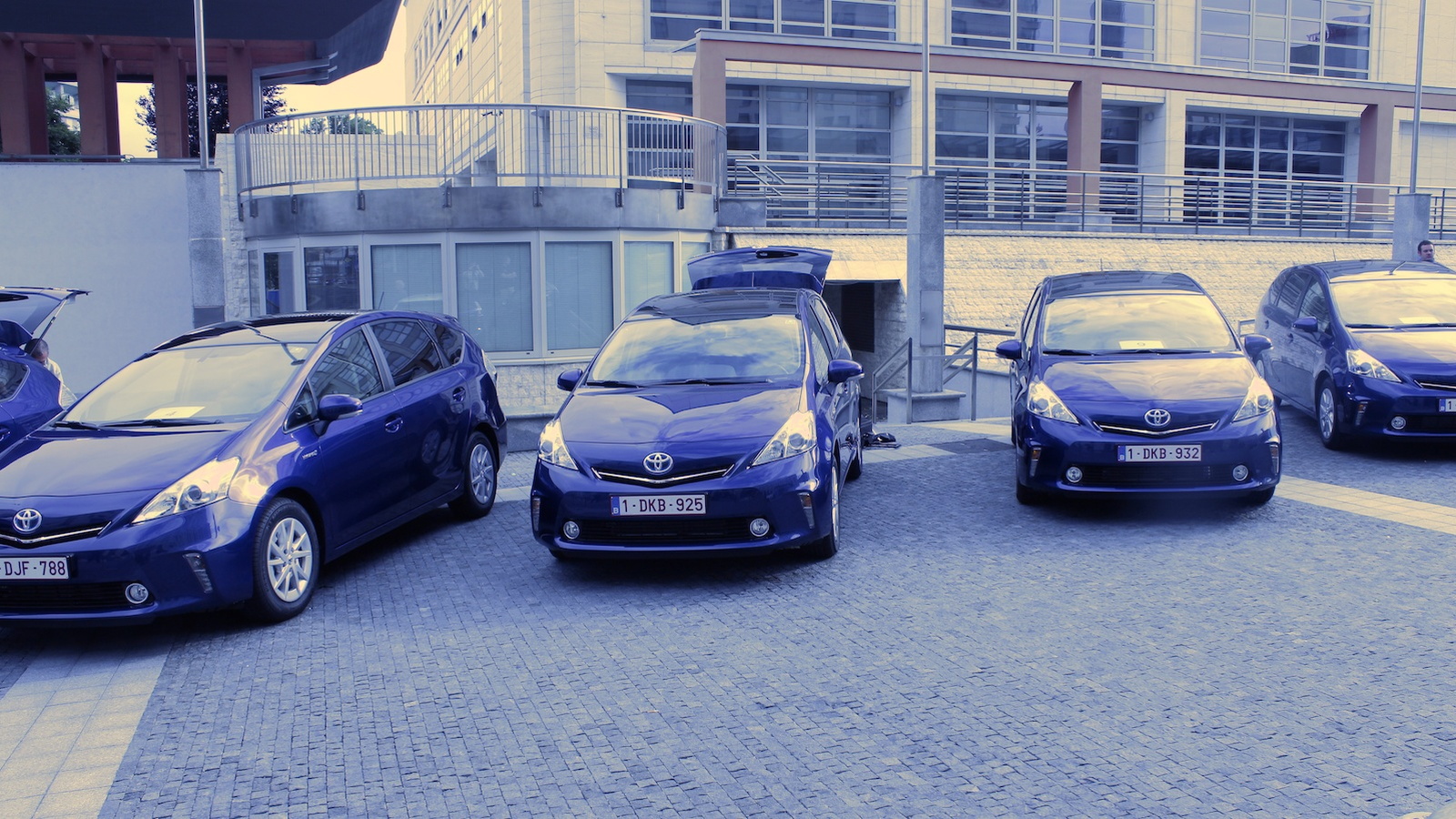 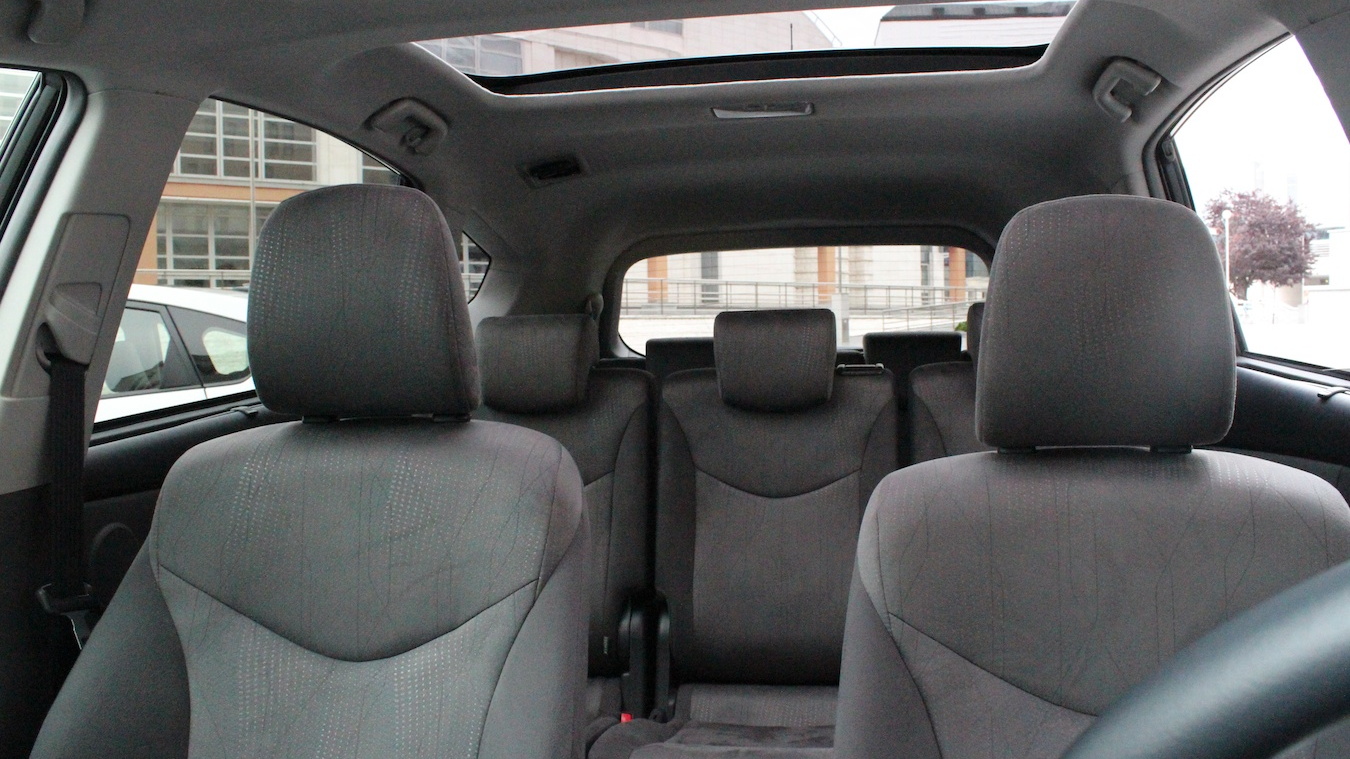 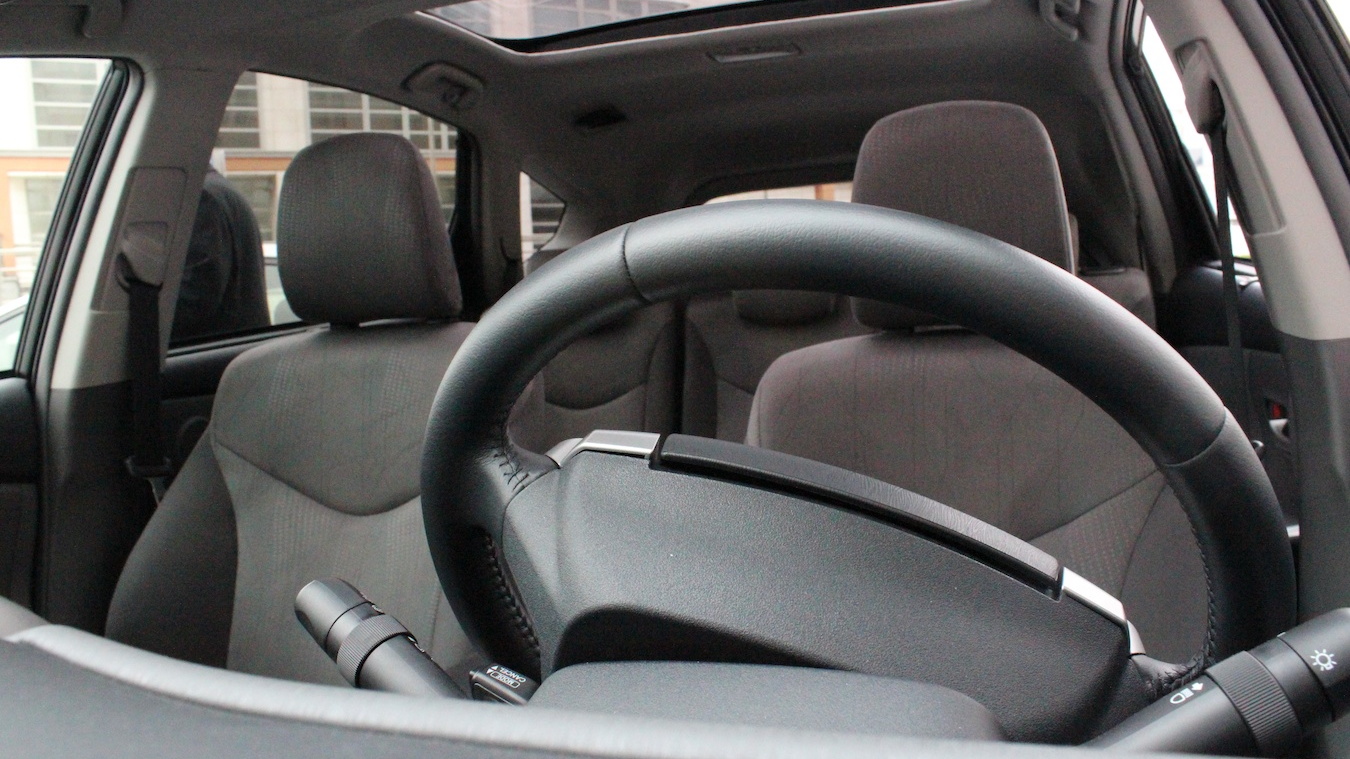 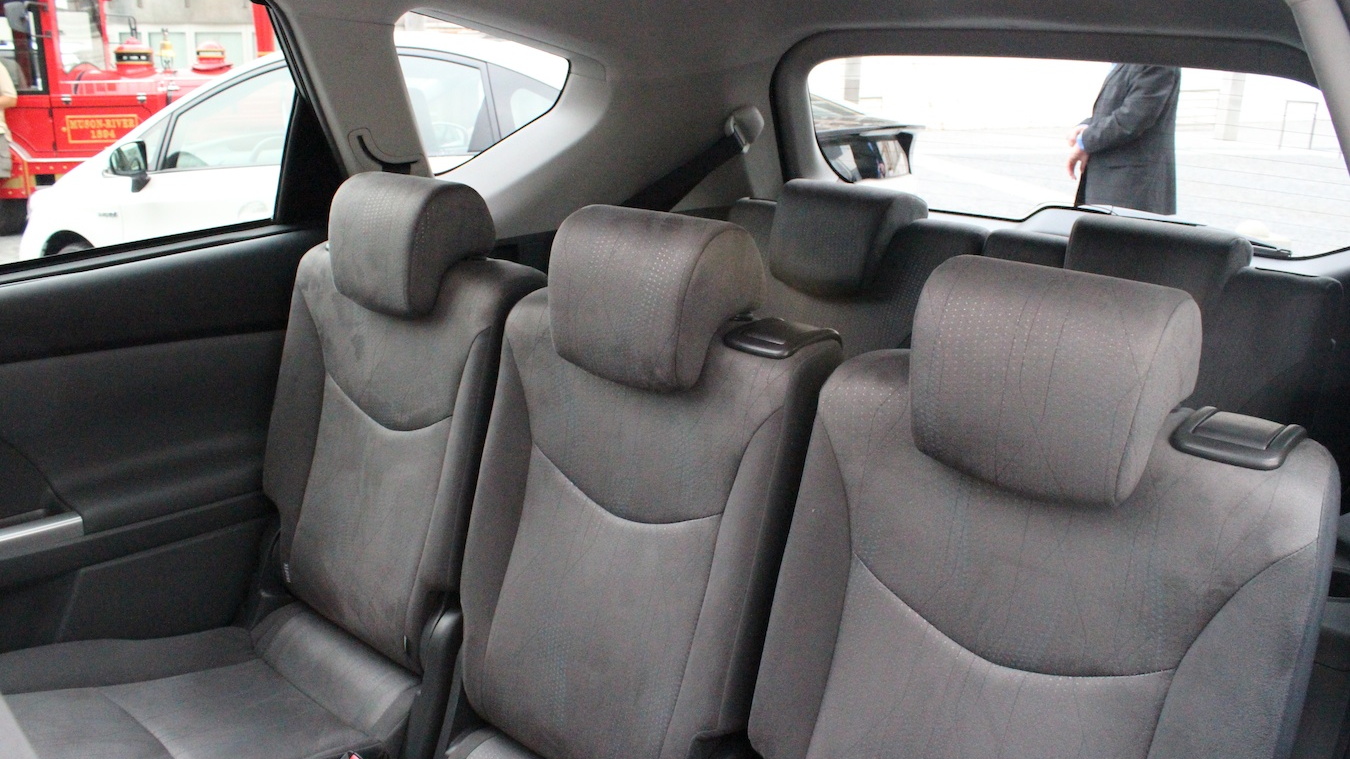 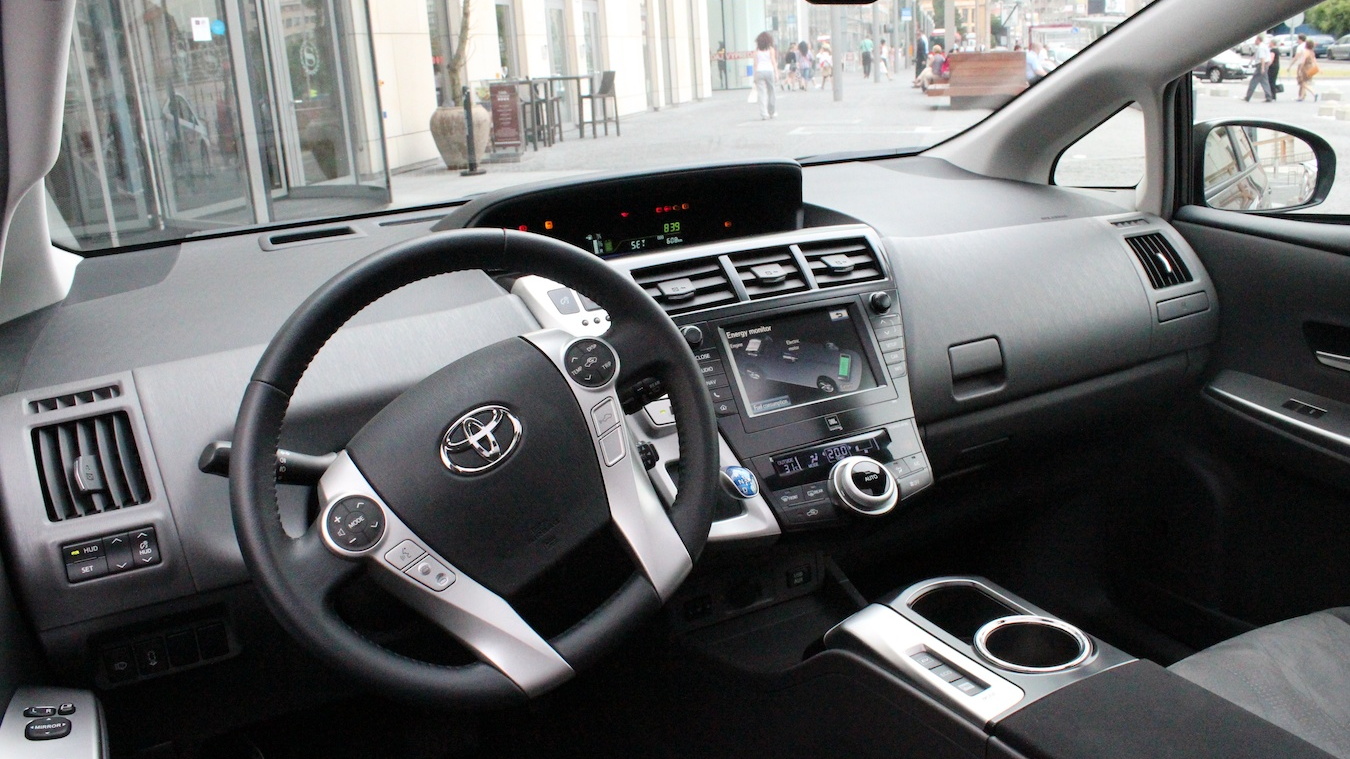 Have you ever wondered what life would be like if one tiny thing in your world changed? For example, what if you earned more money? Or had a different name?

What if Toyota made a 7-seat version of its Prius V wagon?

We can’t tell you what life would be life with more money or a different name, but we can help you with the 7-seat Prius V bit.

Because it’s real. At least if you live in Europe or Japan. And it’s called the 2012 Prius Plus in Europe, or the Prius Alpha in Japan.

Look inside however, and there’s an extra row of seats squeezed in where the load bay should be.

The idea, Toyota says, is to offer MPV-mad Europeans and Japanese buyers the chance to buy a car that retains the excellent gas mileage of the original Prius, but also gives them the extra seats they need.

Since it isn’t sold in the U.S., the 2012 Prius Plus doesn’t have official EPA gas mileage figures. While it varies in weight slightly from the 2012 Prius V, we’d guess it should easily manage the same 42 mpg combined of its U.S. cousin.

Like the 2012 Toyota Prius V, there’s the same instrument cluster, dual-zone climate controls and navigation system, while the middle row of seats benefit from fore and aft adjustment as well as the ability to recline.

It’s worth noting however, that the middle row of seats in the Prius Plus are individually adjustable with a 30:30:30 split, versus the Prius V’s 60:40 split.

This makes it possible to carry long items down the center of the car while still being able to carry passengers.

In order to squeeze an extra row of seats into the same 181.6 inch frame as the Prius V, Toyota’s engineers had to relocate the car’s traction battery pack.

But the nickel-metal hydride battery pack found in every non-plug-in Toyota Prius since the original sedan proved just too big to put anywhere else in the car, so Toyota engineers were left with one alternative: replace it with a lithium-ion battery

Repackaged, the Prius Plus’ smaller, 56-cell lithium-ion battery pack is some 17 pounds lighter than the V’s nickel-metal hydride pack, and fits in between the front two seats underneath the center console.

The result? A Prius that packs two extra seats but doesn’t loose the ability to carry large cargo when the rear seats are folded flat.

Admittedly, the center console only has a storage area big enough for a folded map or a few compact discs, but we feel the moved battery pack -- now mid-car -- results in improved road handling.

Interestingly, the 2012 Prius Plus is the only wagon Prius available in Europe, while in Japan it is sold alongside the five-seat V.

The extra seats, not to mention the more-expensive lithium-ion battery pack means the Prius Plus is more expensive than the Prius V. We don’t have any direct comparisons to make, but for reference, it will go on sale in the U.K. later this year for around $40,000, including a 20 percent sales tax.

While the rear seats are undeniably useful when you need to carry more than 5 people, the tiny load-bay area behind the third row of seats means only a few grocery bags will fit when all seats are occupied.  In fact, even with a small suitcase and camera bag, we found it necessary to fold one of the rear seats flat to accommodate our equipment on the way back to the airport at the end of our drive.

Move the second row closer to the first, and it just about possible to fit five moderately-sized adults in the second and third rows. However, the rear row is best suited to hauling children to and from soccer practice.

We asked Toyota representatives if the rear row could be completely removed, increasing luggage space in true minivan style.

At the moment, we were told, that wasn’t possible, but representatives said it could be added in the future if customers ask for it.

The 2012 Prius Plus certainly gives the Prius wagon platform a little more versatility thanks to two extra seats that fold flat into the load bay floor.

But it won’t be heading to the U.S. any time soon, Toyota representatives told us.

That’s because most Americans favor larger minivans when it comes to carrying more than 5 passengers, while Toyota already makes a 7-seat hybrid for the U.S. market: the 2012 Toyota Highlander Hybrid.

At last year's 2012 Toyota Prius V launch in the U.S., Toyota represenatives told us that the extra seats were simply too small for U.S.-sized children, whose parents were accustomed to the larger third-row seats in U.S. minivans and larger crossovers.

Would you want one?

For now, there is very little chance we’ll ever see a 7-seat Prius V in the U.S.

But if you had the choice, would you buy one? And why?