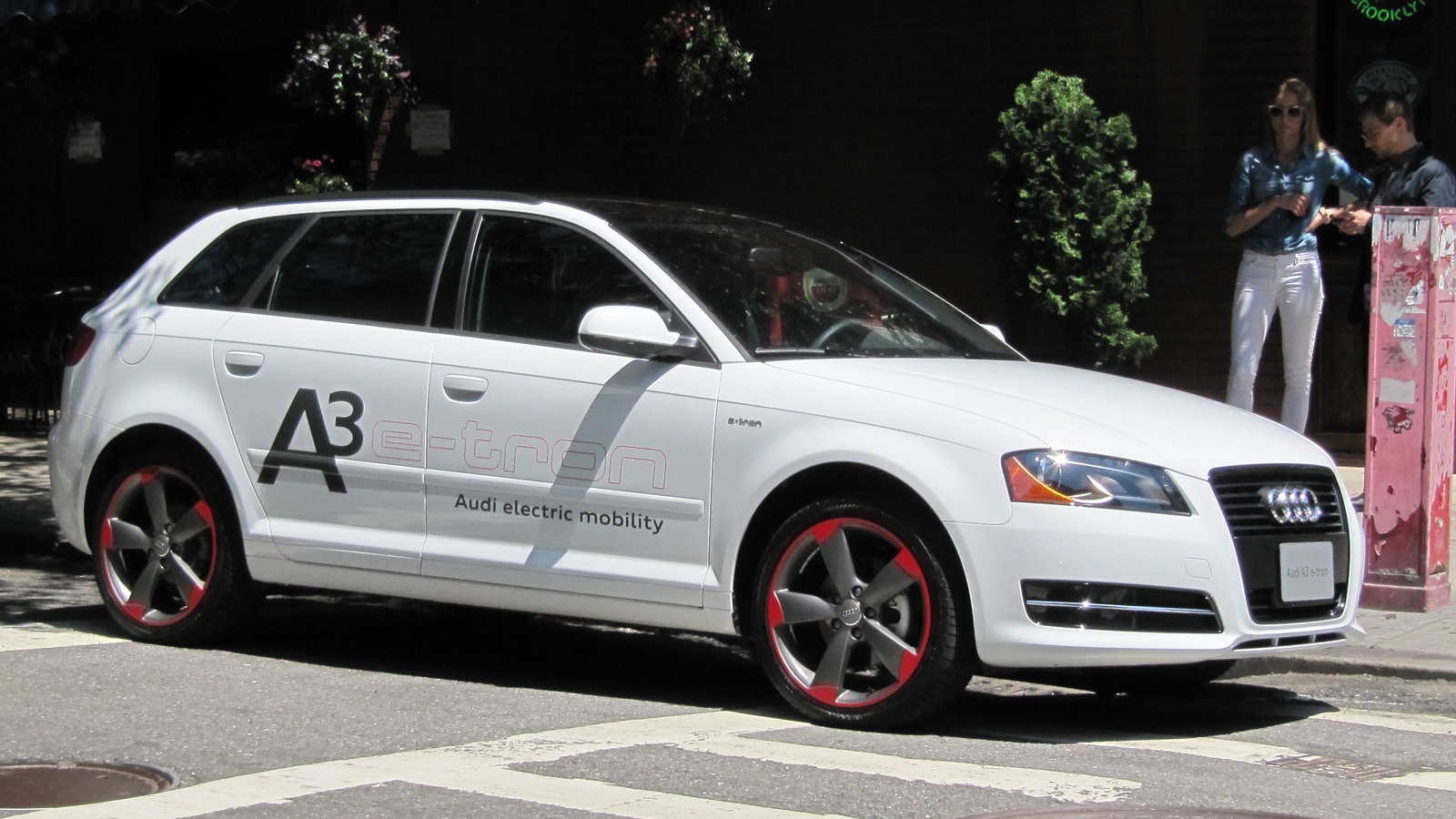 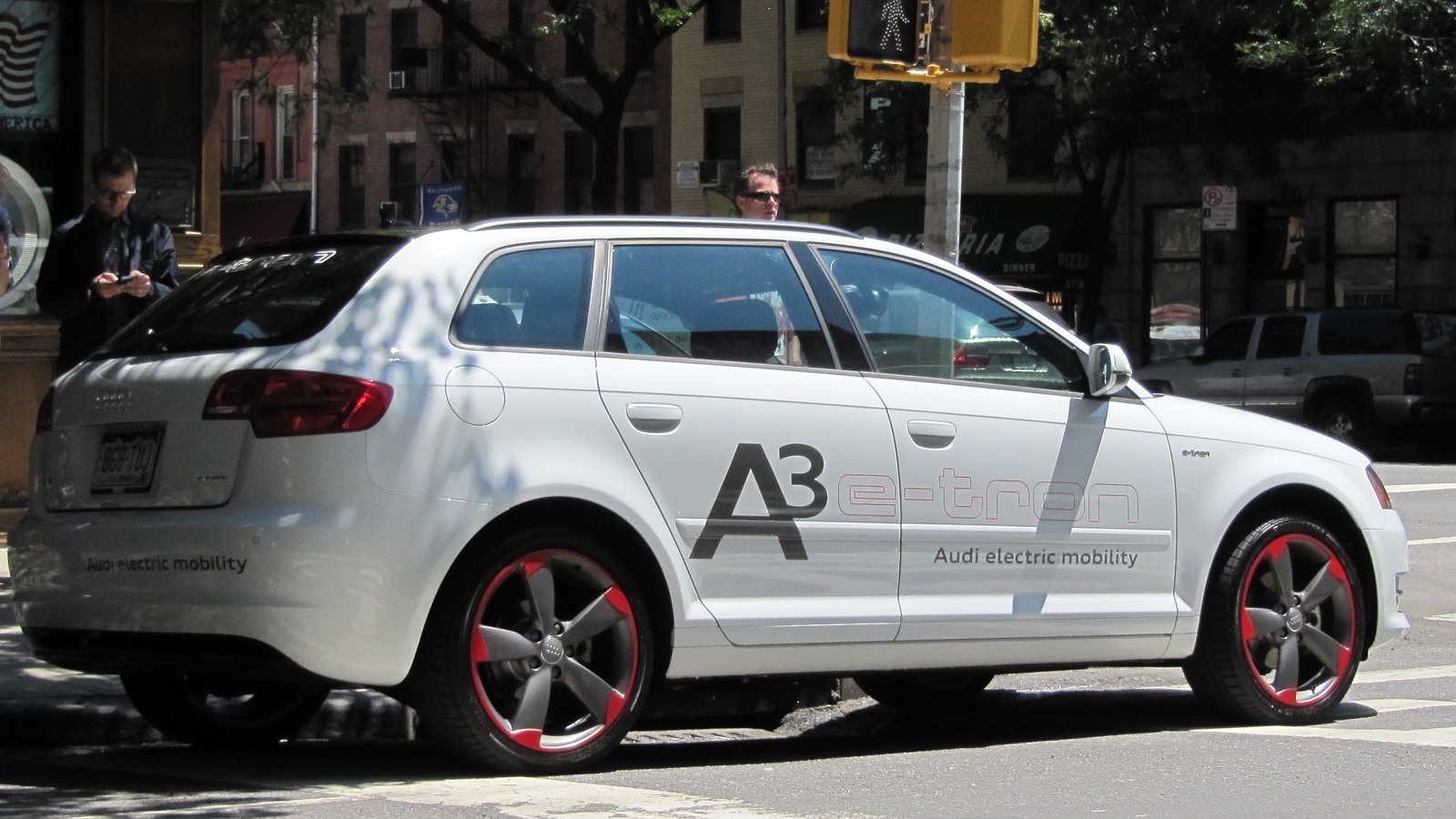 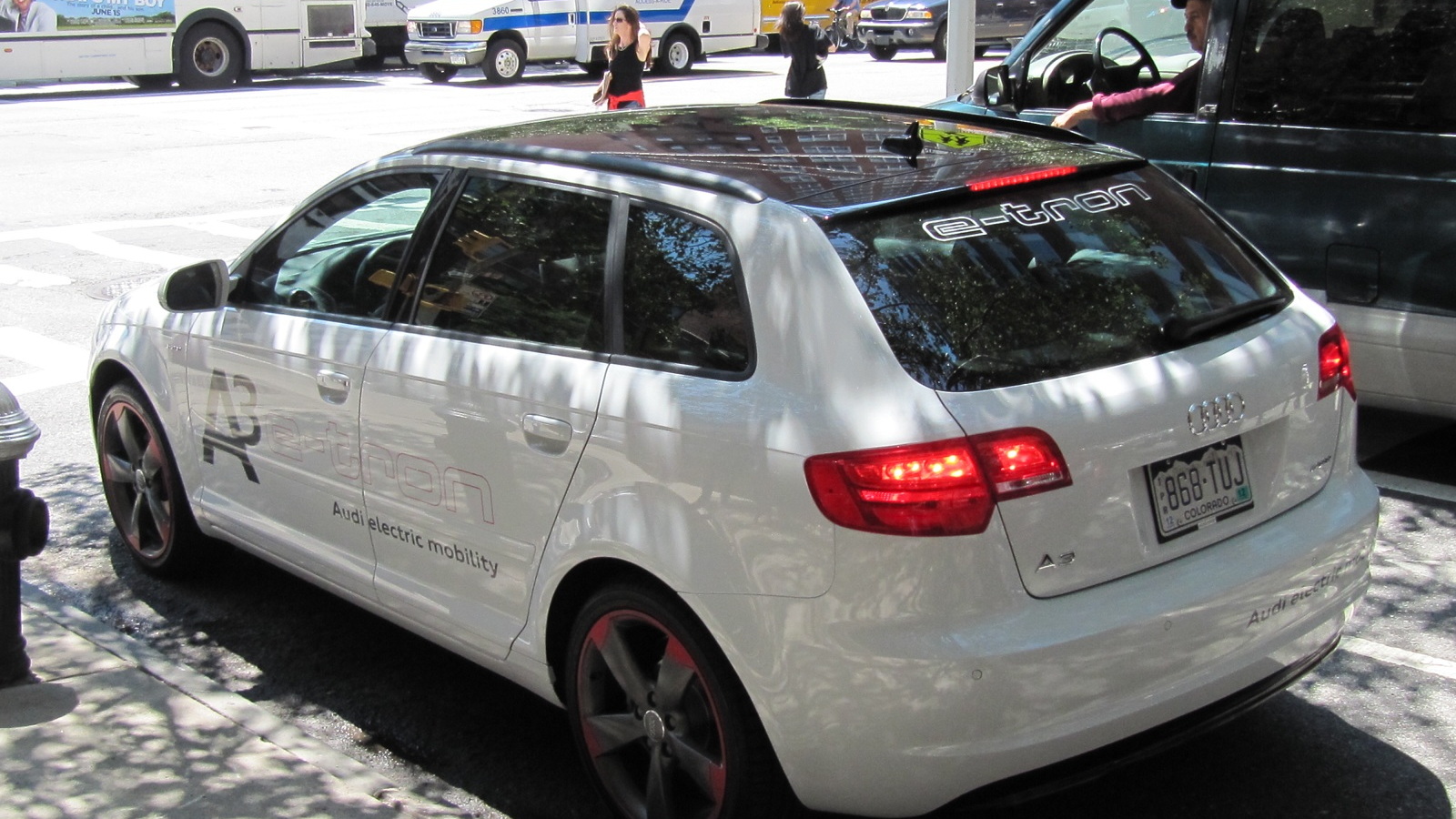 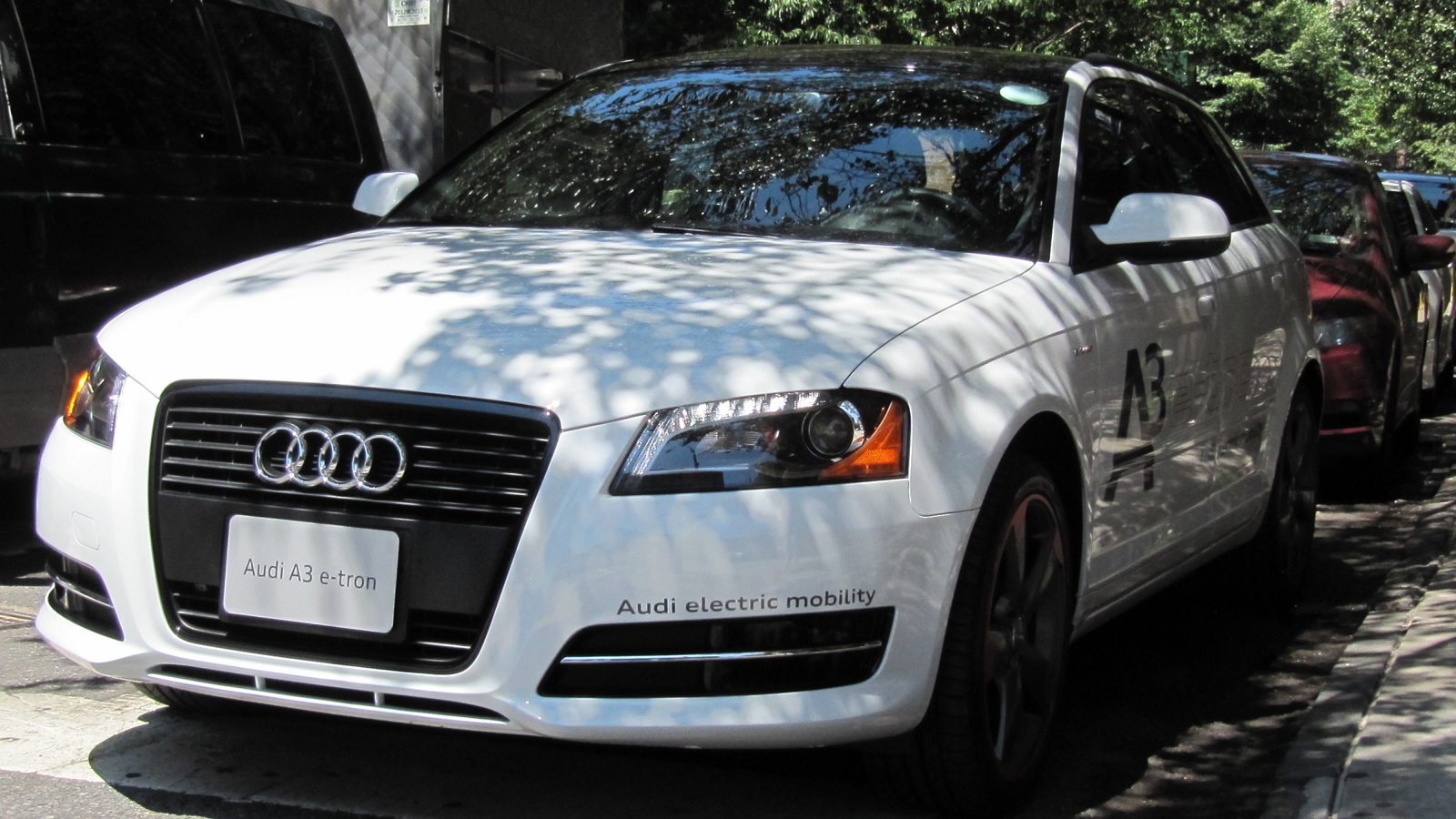 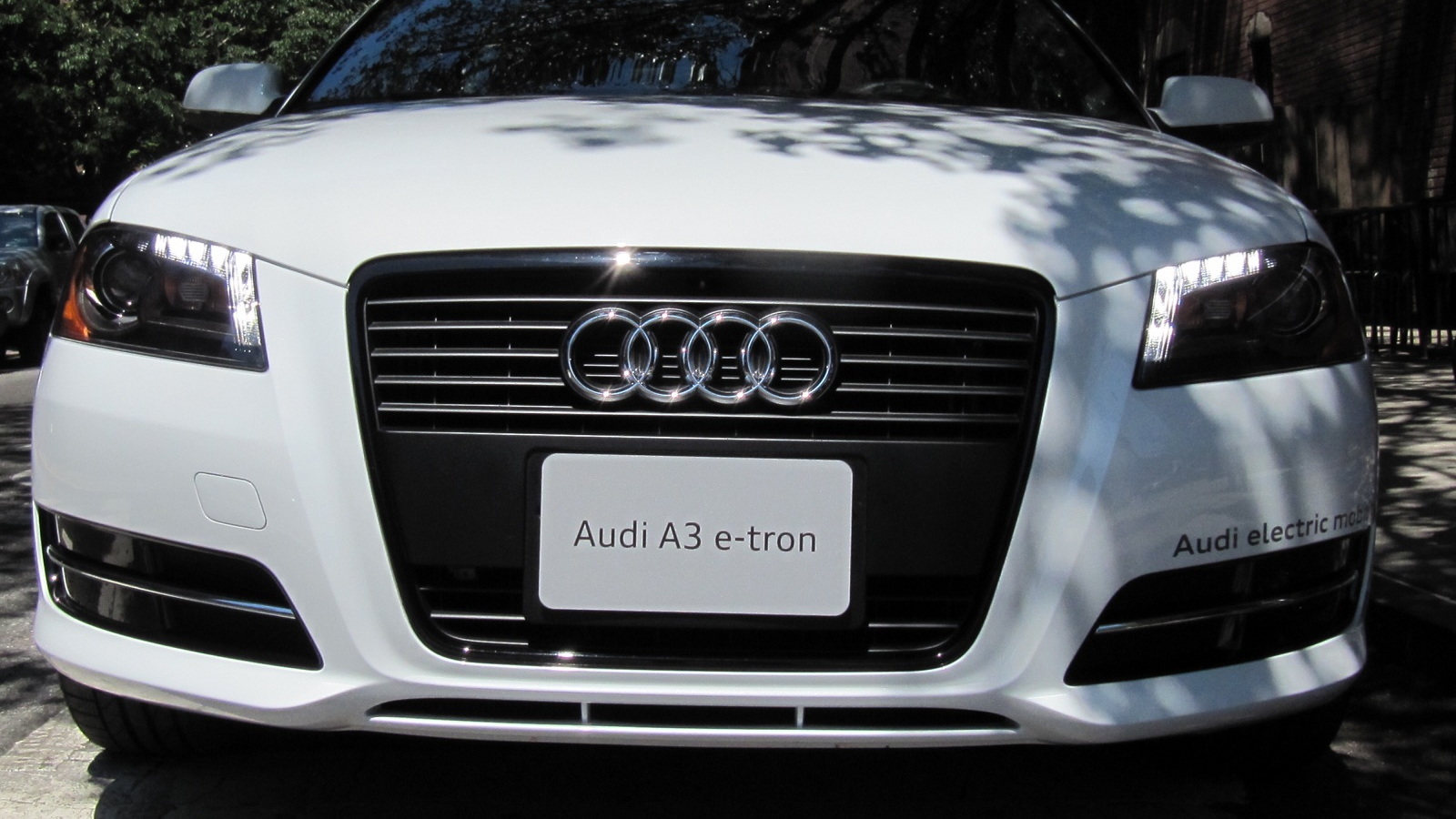 Unlike other carmakers--including BMW with its ActiveE program--Audi has chosen to use only in-house drivers to test the fleet of electric A3 e-tron prototypes it has brought to the U.S.

So we're pleased to be among the few media outlets to drive an Audi A3 e-tron, one of just 17 such cars in North America.

Our short 45-minute test drive in the heart of New York City including both urban stop-and-go traffic and some freeway driving at speeds up to (and perhaps beyond) the legal limit on Manhattan's winding and unpredictable FDR Drive along the East River.

To sum it up, the prototype A3 e-tron we drove felt like a production-ready vehicle, solid, relatively well sorted, and all but ready for showrooms.

Audi also told us that the first A3 with a plug will actually be a plug-in hybrid version, which will be offered as a high-end version of the all-new Audi A3 that will arrive for 2014.

We learned more about that upcoming A3 plug-in hybrid--but, first, we got to drive the battery-electric A3 test car through the middle of Manhattan.

Fitted with sporty red-rimmed alloy wheels, the Glacier White electric A3 looks otherwise just like a standard A3 five-door hatchback.

It has some "A3" and "Audi electric mobility" graphics on the doors, which attracted attention, but you might not notice it in traffic if you weren't looking carefully.


The Audi A3 e-tron uses the same component set as the Volkswagen Golf E that is simultaneously being tested by Audi's sister brand within the VW Group, and will go on sale late next year.

That means it uses a 26.5-kilowatt-hour lithium-ion battery pack powering an electric motor with peak output of 85 kilowatts (114 horsepower) and sustained output of 60 kW (82 hp) driving the front wheels. Torque is quoted at a substantial199 lb-ft.

The battery pack is split into three portions, one under the rear deck--Audi is proud that load space remains the same in the electric A3, though it does without a spare tire--another under the rear seat, and the third in the central tunnel.

Curry stresses that the control software and performance parameters were tuned to give it an Audi driving feel, and that all final assembly of A3 e-trons is done at Audi headquarters in Ingolstadt.

Curry said Audi calculated the car's range to be 92 miles on a simulation of the EPA test cycle, meaning that the prototype A3 e-tron might deliver a rated range considerably higher than the Nissan Leaf or Ford Focus Electric if it were sold today.

We didn't test the top speed, but the acceleration feels about right--it's strong off the line, but starts to tail off around 40 mph. In that respect, it's very similar to the Volkswagen Golf Electric we tested last summer.

That makes it good to drive in urban traffic, but could pose problems for fast freeway maneuvering, which we also weren't able to test.

On the road, our electric A3 felt solid and well screwed together--considerably better finished than other prototype or test fleet cars we've driven from other makers.

Initially, its most noticeable feature was touchy brakes that engaged suddenly. We quickly learned to drive around it, but we think Audi has some tuning left to do on brake feel. The switch from regenerative to friction brakes was very smooth, though.

Drivers can select either the standard "D" position on the drive selector or pull the lever one stop back to drive with higher regenerative braking, closer to the "one-pedal" driving feel of a Tesla Roadster or BMW ActiveE.

Starting in "D," it's also possible to increase the degree of regeneration by using the paddle shifters behind the steering wheel: pulling the left one boosts regenerative braking, with one, two, or three "bars" of regen available.

The A3 e-tron has three driving modes: Standard, Efficiency, and Dynamic. As you might expect, Efficiency is the "eco" mode, and this one is particularly grim. You can use it, but you won't enjoy it.

Dynamic mode, as befits an Audi, was more fun, although there wasn't quite as much extra performance as we had expected under high-demand situations like accelerating to merge off an uphill on-ramp.

We suspect most Audi drivers would choose to leave the car in Dynamic mode all the time, to take advantage of the smooth electric torque.

The standard J-1772 charging port is located behind a door on the right rear quarter panel, feeding a 3.3-kilowatt charger that will fully recharge the battery pack in about 9 hours using a 240-Volt Level 2 charging station.

A3 e-tron to be plug-in hybrid

The car we drove won't be the one that Audi launches as the A3 e-tron, which will arrive in a few years as a plug-in hybrid rather than the battery electric version we drove.

According to Jeff Curry, Audi of America's head of e-mobility, the company will launch the A3 e-tron as a plug-in hybrid version of the all-new A3, which will arrive in the U.S. for the 2014 model year.

That new A3 will be built on Volkswagen Group's so-called MQB modular component set, which has been designed to accommodate not only gasoline and diesel powertrains, but also hybrids, plug-in hybrids, and fully electric propulsion.

We'd expect the plug-in hybrid A3 e-tron to launch slightly after the all-new 2014 Audi A3. It will likely use the 150-hp turbocharged 1.4-liter engine and hybrid system first shown in the Volkswagen Jetta Hybrid Concept at the Detroit Auto Show last January.

That engine is paired to a seven-speed dual-clutch gearbox, with a 20-kilowatt (27-hp) electric motor sandwiched between the engine and transmission.

Audi's plug-in hybrid version might have a more powerful electric motor, to enable the car to travel in full electric mode for 15 miles or thereabouts, powered by a larger battery pack than the relatively small one used in the 2013 VW Jetta Hybrid.

Top of the A3 range

Curry said that because the plug-in hybrid would be the A3's most technically sophisticated powertrain, the model would probably sit at the top of the A3 range.

He also noted that Audi's higher price points would allow the use of more lightweight materials to cut weight and improve performance.

We suspect that means the 2015 Audi A3 e-tron plug-in hybrid could be priced above $40,000, putting it at or above Chevrolet Volt prices.

VW Group has a history of electric Golfs dating back to the 1980s, and the global automaker is clearly committed to offering a full range of electrified and plug-in alternatives.

As the sporty volume brand within the group, not to mention a surging competitor in the luxury segment, Audi will have to offer technologically advanced vehicles that are also sportier and more fun to drive than their mass-market VW counterparts.

Based on our brief drive in the all-electric prototype A3 e-tron, we look forward to learning more about Audi's production plug-in hybrid.