Turning on an electric car is a strange, ethereal experience.

After years of turning the key on regular cars and feeling them burst noisily into life, the glow of instruments and occasional musical jingle of an EV feels soothing and futuristic.

Turn on an ultra violet light over artist Ian Cook's latest creation, a fluorescent Chevrolet Volt, and the experience is much the same.

Ian, creator of Popbangcolour, has a unique style of painting--he uses radio-controlled cars. By dabbing blobs of paint onto canvas and then driving R/C cars across it, using spinning wheels to flick paint and making tire marks, Ian builds up unique, colorful and dynamic images of cars, logos and pretty much anything else.

Normally, his art is created on large, white canvasses in daylight, but the Volt presented a unique challenge: It was created entirely in the dark!

With the piece being filmed for the video above, Ian couldn't risk turning on the lights to see his progress, so he essentially painted blind, with only faint lines sketched in gray crayon to go on.

"It was a challenge," Ian told us when we spoke to him, "...A very stressful challenge. But I wanted somthing with that wow-factor".

The glowing Volt is the first time Ian has used fluorescent paint for one of his unique artworks--which have previously included several other projects for Chevrolet, including a Camaro convertible, the famous Chevy "bowtie" and the Chevy Spark. 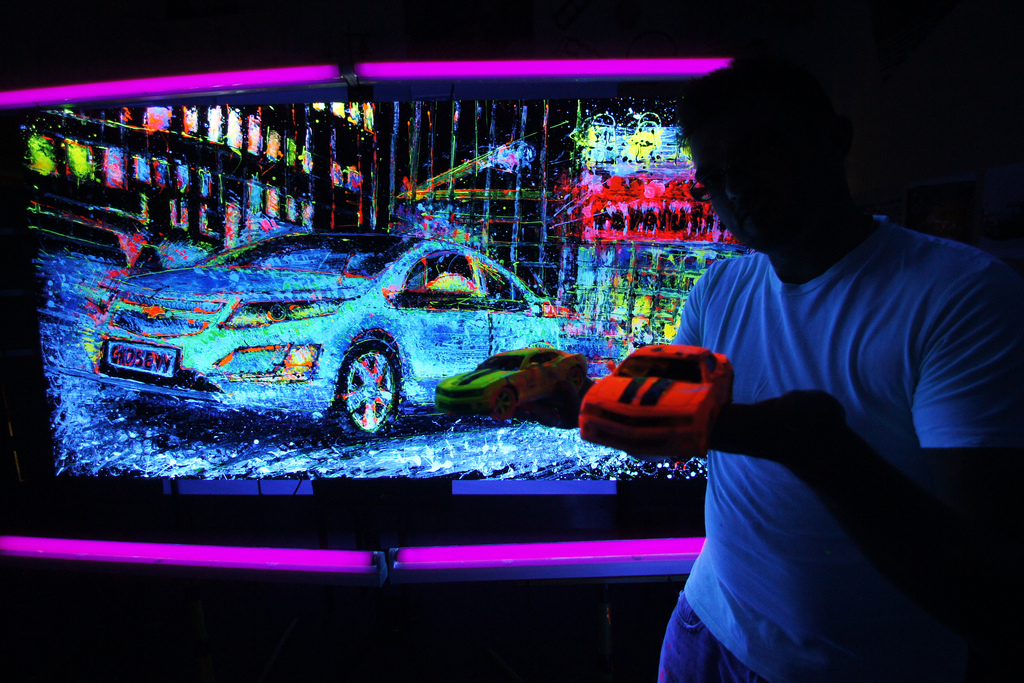 He'd used fluorescent paints before at school, so knew what sort of effect he was after, but painting in the dark on a black canvas made the 12-hours of work some of the most difficult so far, and a true experiment.

"I couldn't even see what color paints I was using," he explained.

So why the Volt? After Ian's previous Chevy work, Chevrolet UK wanted another piece, and the Volt was chosen as the perfect vehicle for the new fluorescent plan. "I wanted an 'electric' artwork..." he said, "Something that could be 'turned on'."

The effect, as you can see, is stunning. So are there any more fluorescent cars in the pipeline? Perhaps, though like any great artist, Ian was reluctant to give us too many details.

"I'd like to do more on this one though," he adds. "I'd like to add more to the image, so next time people see it, they see something new".

You can find out more about Ian and Popbangcolour on his website.