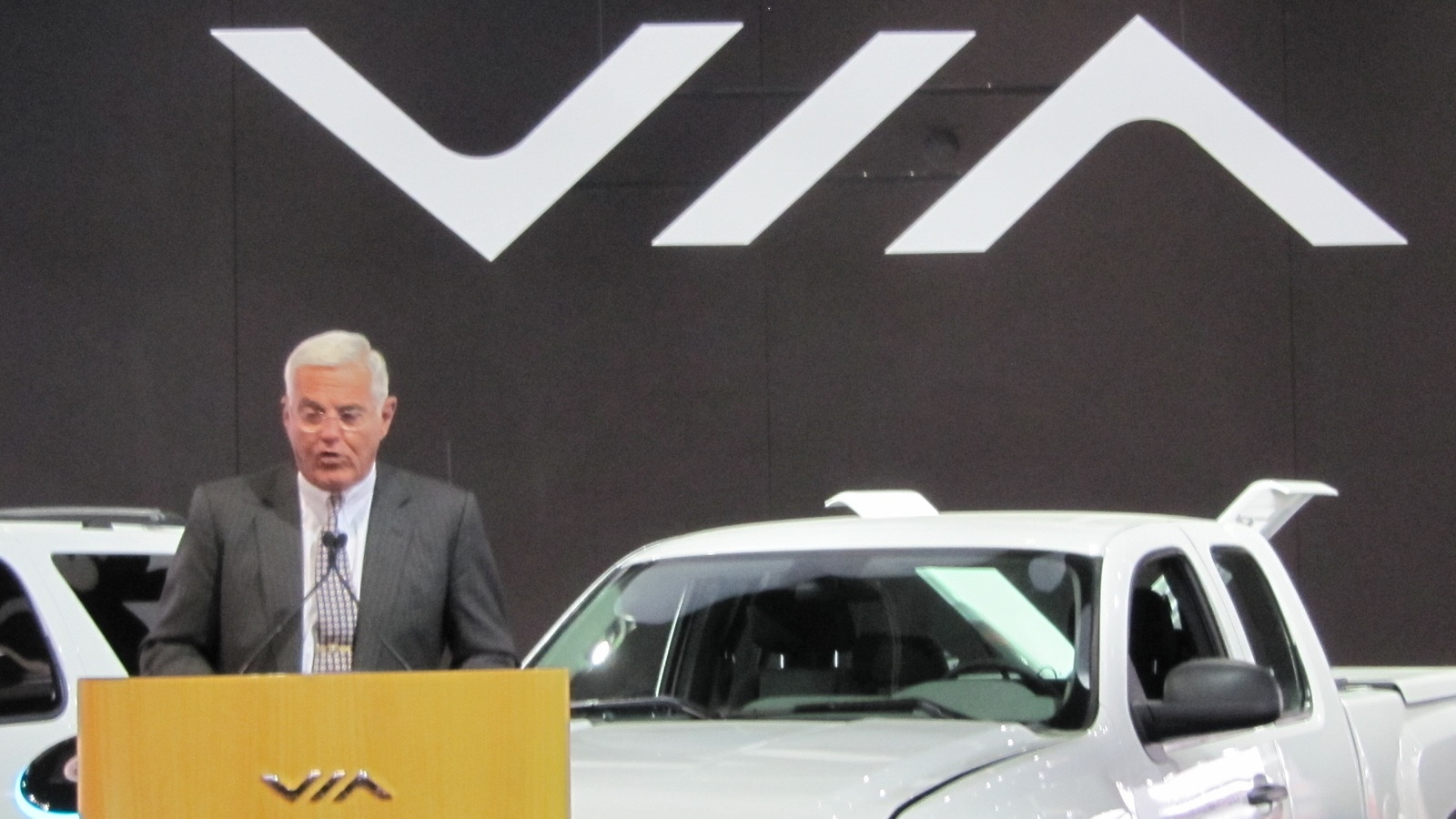 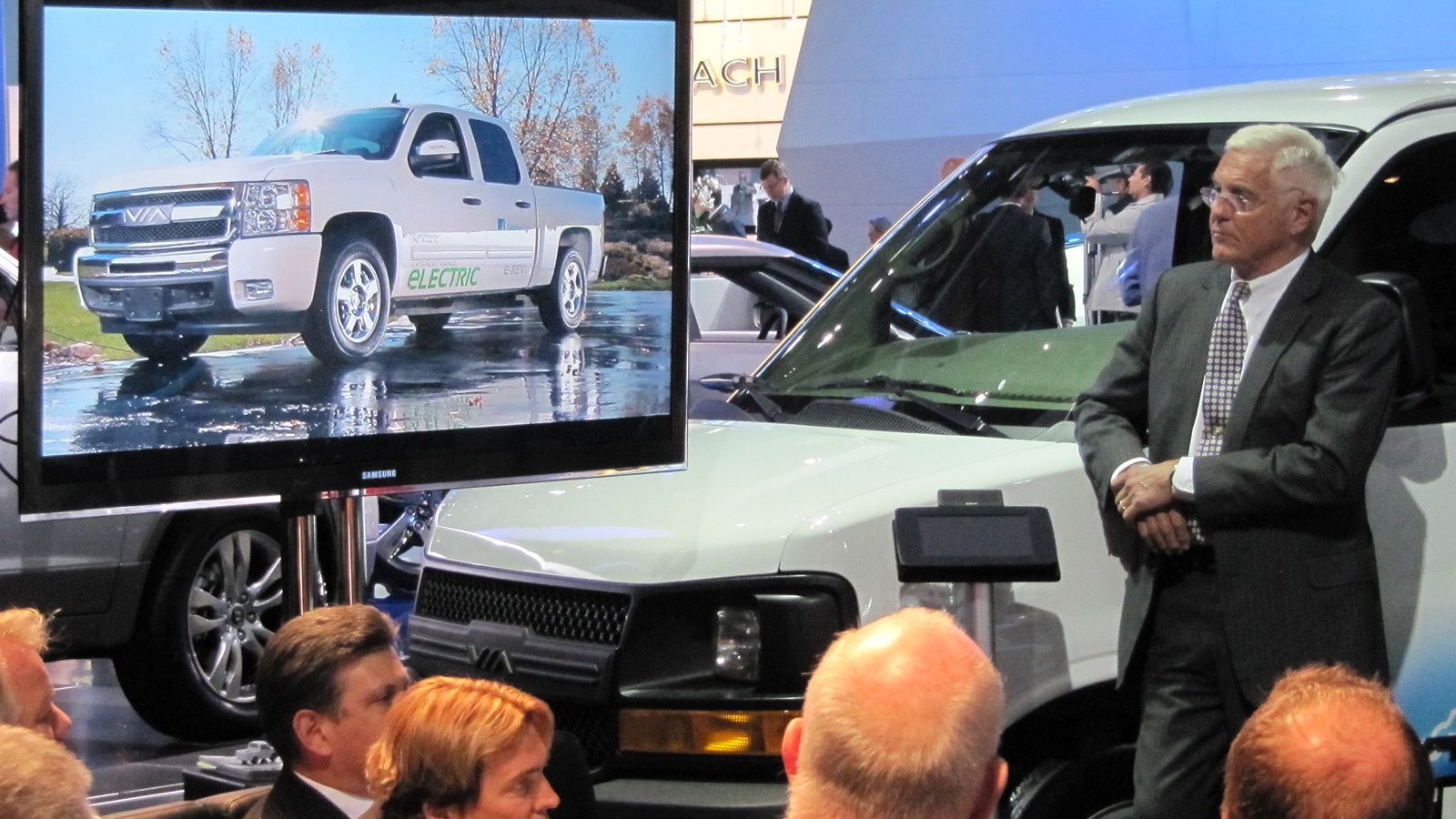 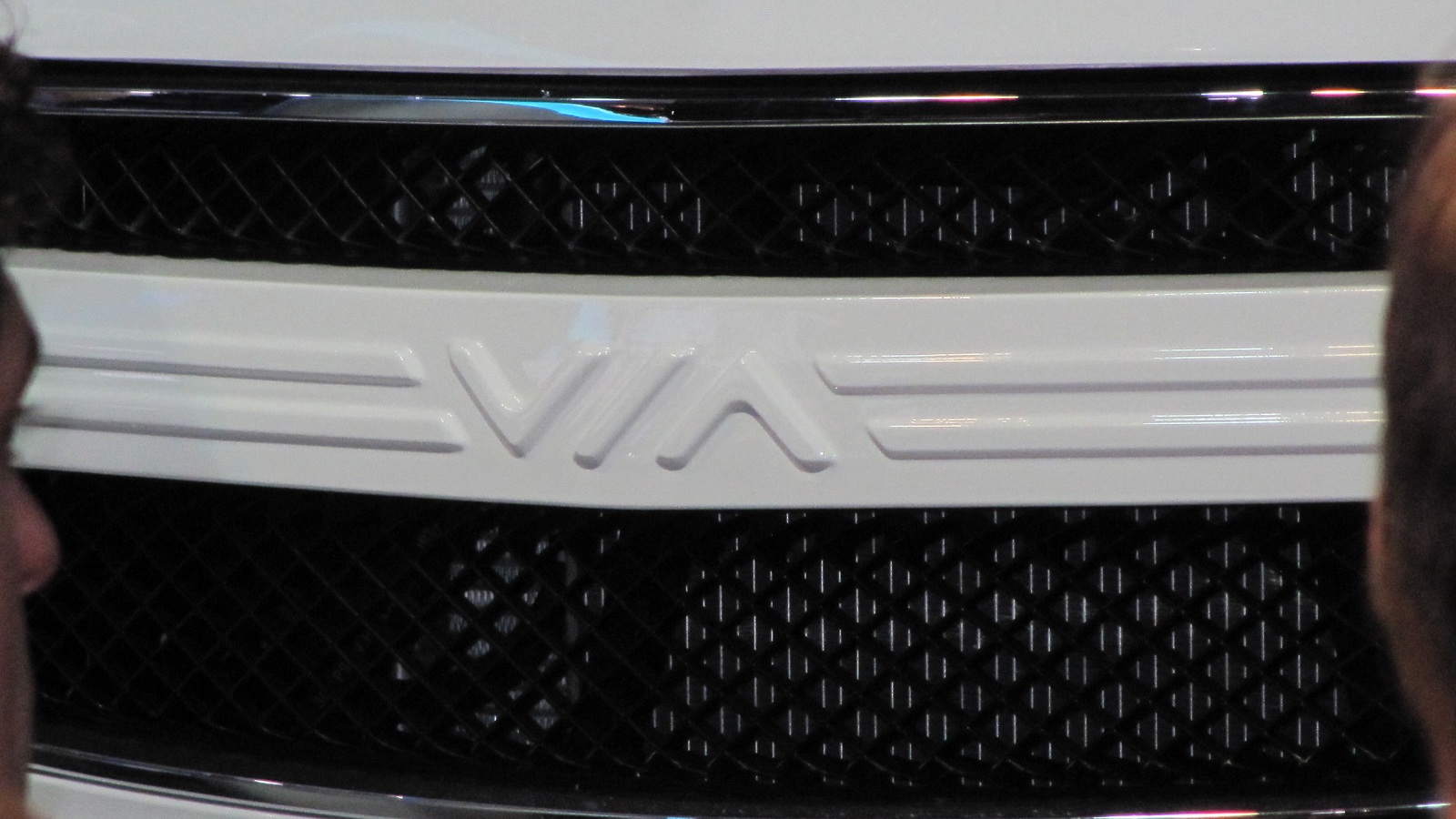 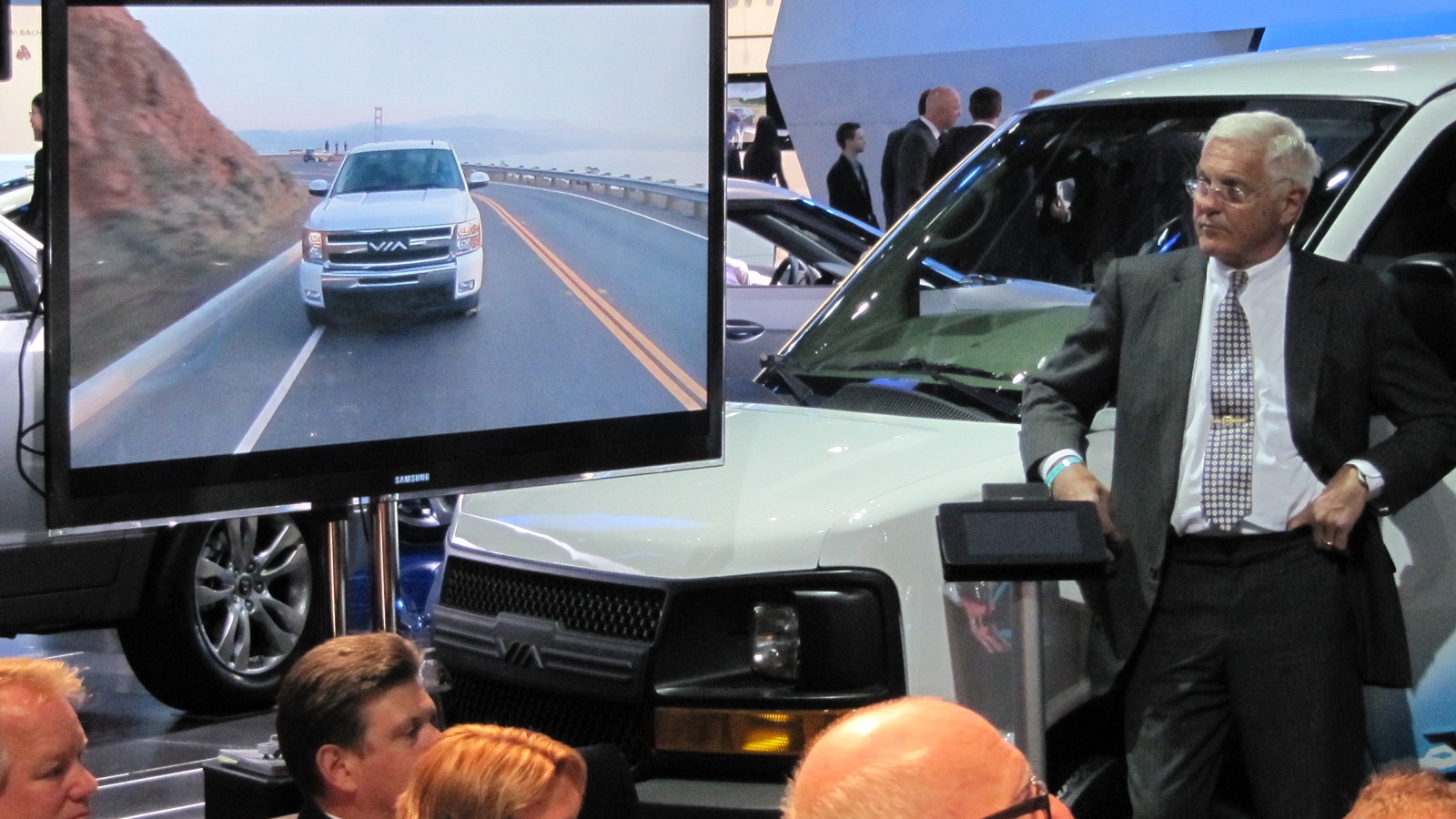 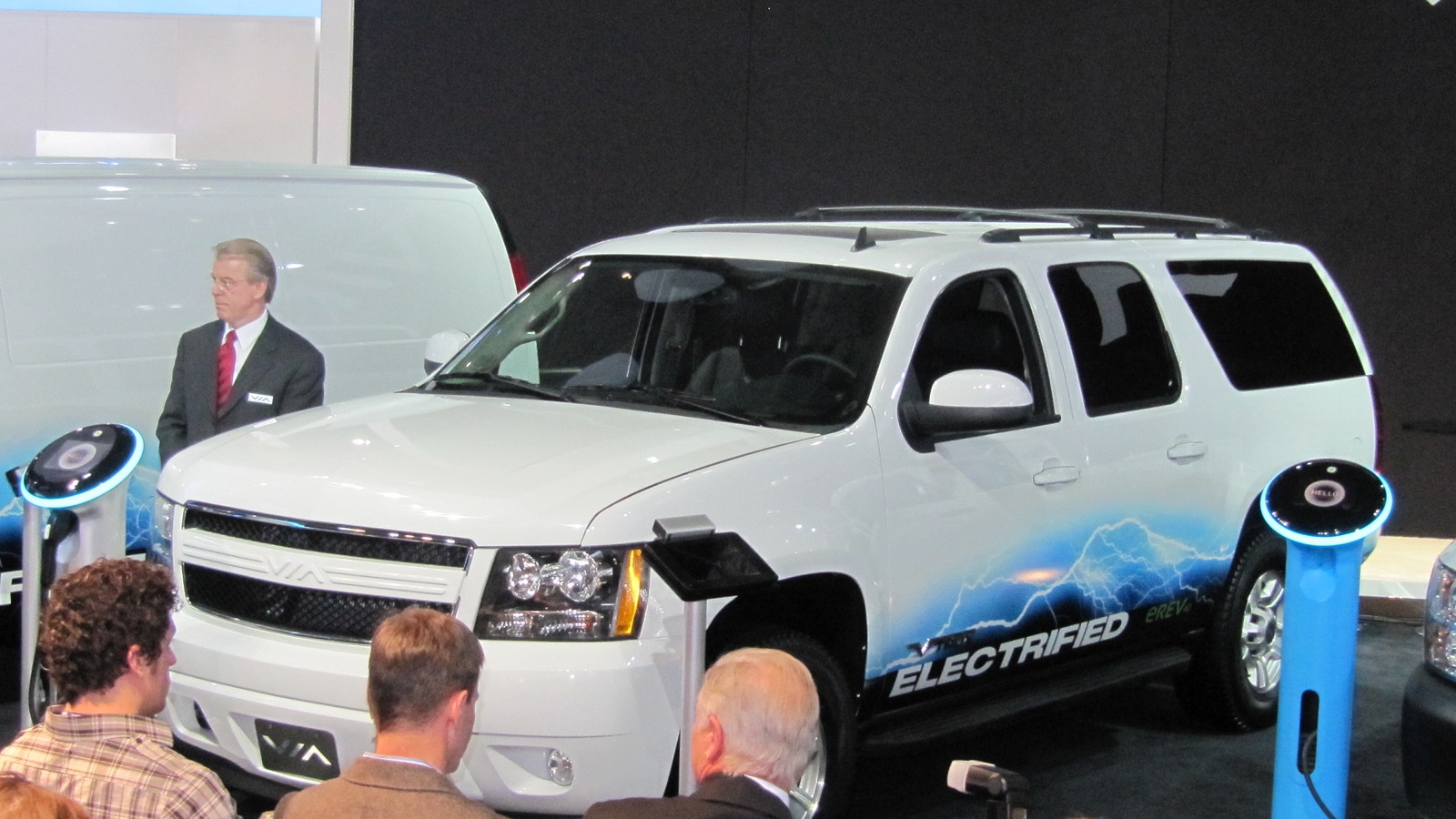 This is a perfectly serious question.

A basic 2012 Chevrolet Silverado 1500 full-size pickup truck starts around $23,000, and the rear-wheel drive XFE model is rated by the EPA at 18 mpg combined.

So how much would you pay for a 100-mpg Silverado pickup?

Via Motors, a company that plans to convert GM pickup trucks, full-size sport-utility vehicles, and vans to plug-in hybrid powertrains, has a number in mind.

The company debuted its products, sold under the Vtrux model name, at the Detroit Auto Show 10 days ago.

Bob Lutz, not only a Via board member and industry eminence grise but also a plug-in vehicle convert, shared presenting duties with Via COO Alan Perriton.

The company has arranged to buy "glider" trucks from Chevrolet, which it will then fit with a range-extended electric powertrain.

The wheels are powered by a rear-mounted 300-kilowatt (402-hp) electric motor, powered by a liquid-cooled 24-kilowatt-hour battery pack that sits between the frame rails and contains lithium-ion cells provided by A123 Systems.

This gives the pickup an electric range of up to 40 miles using no gasoline at all. Once the pack is depleted, a 4.3-liter V-6 engine kicks in to power a generator that feeds electricity to the drive motor for an additional 400 miles of range.

That electric traction motor, incidentally, weighs only 108 pounds, leading to photos of Via executives holding it in front of them to show just how compact it is.

Total added weight of the entire drivetrain is about 300 pounds over an equivalent gas-engined truck.

One added feature of the Via electric conversions is a set of 110-Volt power takeoffs provided as standard.

These allow workers to run electric tools, light work sites, and even export 15 kilowatts of power to a house if the utility grid is down.

Electric, water, gas, telephone, and cable-TV utilities, Via said, find it appealing that they won't have to use a gasoline-fueled generator or keep a diesel truck running--removing a source of customer irritation.

Another potential customer: the various branches of the U.S. military, which is working hard to reduce its fuel consumption with prototype plug-in tanks, development of a clandestine extended-range vehicle, and even a hybrid Humvee.

Via's first vehicle will be an extended-cab pickup truck, set to begin production this summer. A large sport-utility based on the Chevy Tahoe (or Suburban) is to follow, with full-size vans after that.

'Revenge of the Electric Car' premiere: Bob Lutz arrives in a Chevy Volt

Via is targeting production of 20,000 conversions a year once it's up and running, meaning it may well offer the first plug-in pickup truck to go into (low-volume) production.

"We're getting lots of orders from the nation's largest vehicle fleets," Lutz said in his presentation. Those are not only utilities, but also businesses that make routine light deliveries, including Verizon, Coca-Cola, Pepsi, and Frito-Lay.

At the launch event, Greg Pruitt of Pacific Gas & Electric, the nation's largest electric utility, spoke of the huge reductions in both fuel cost and maintenance expenses that the Via trucks offered.

PG&E estimated that it could reduce its annual maintenance cost by $7,000 per vehicle, he said, as compared to an equivalent vehicle fitted with a diesel engine.

The answer to the title question, by the way? Via's website is now accepting $1,000 deposits on an anticipated selling price of $79,000 if sufficient orders are received. Deliveries are projected for 2013.

That's a number that can be justified by fuel savings over the 10-plus-year life of a pickup truck in certain types of fleet use, under certain duty cycles.

But it's less likely to appeal to private buyers who can't amortize the entire cost of their truck as a business expense.

Which means that, as Via acknowledges, it's a vehicle for fleet purchases and not for private individuals.