"Win on Sunday, sell on Monday" is a quote that succinctly explains the marketing importance of racing for carmakers.

Whether it's as relevant today as it was back in the 1960s, when you could go into a showroom and buy something superficially identical to the car you'd seen win the previous day, is up for debate.

Still, carmakers still follow that mantra, and Toyota will be hoping that its entry into Japan's SuperGT series and GT300 class with the Prius GT300 will help shift a few more road-going hybrids.

The Prius GT300 has finally been unveiled at the 2012 Tokyo Auto Salon (via Jonisbal, images via as-web), a show where the great and the good of Japan's racing and tuning industry shows off its wares for the year.

As you can probably tell, the Prius GT300 is somewhat more than a modified road car.

Significantly lower and wider, with a huge body kit and wide center-lock Rays racing wheels, it's only just identifiable as a Prius. The head- and tail-lights give the game away somewhat, as does the large "Hybrid" script down the distinctive side profile. 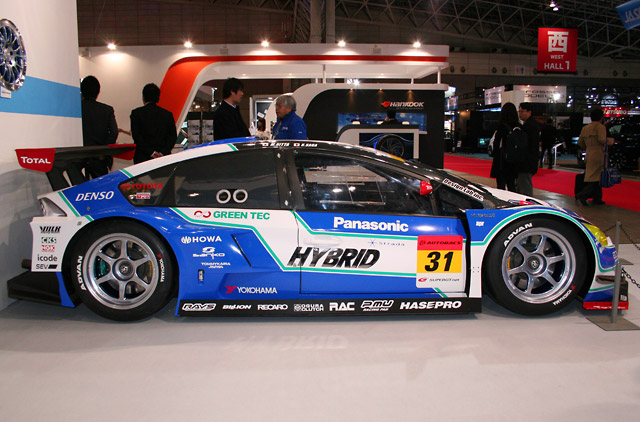 To meet GT300 regulations, the Prius GT300 will have around 300-horsepower. Although the engine will be very different from that found under the hood of a regular Prius, the racer should still keep some form of hybrid drivetrain.

So will a powerful, wild, hybrid race car help sell on Monday?

Well, the Prius' focus has always been on economy and green appeal, but the occasional win in a high-profile series is unlikely to do any harm.

It may even tempt those less keen on the model to see what all the fuss is about...