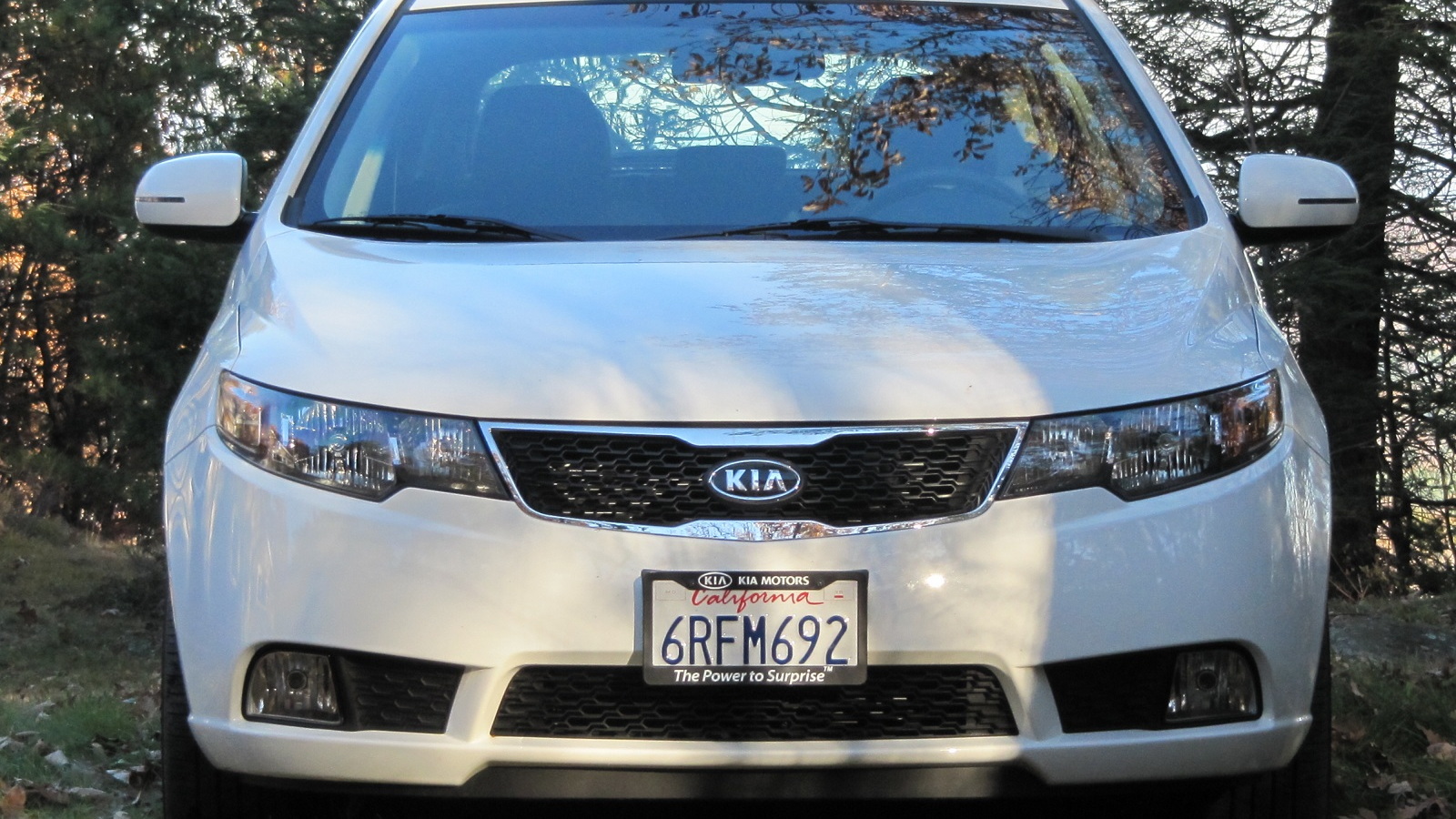 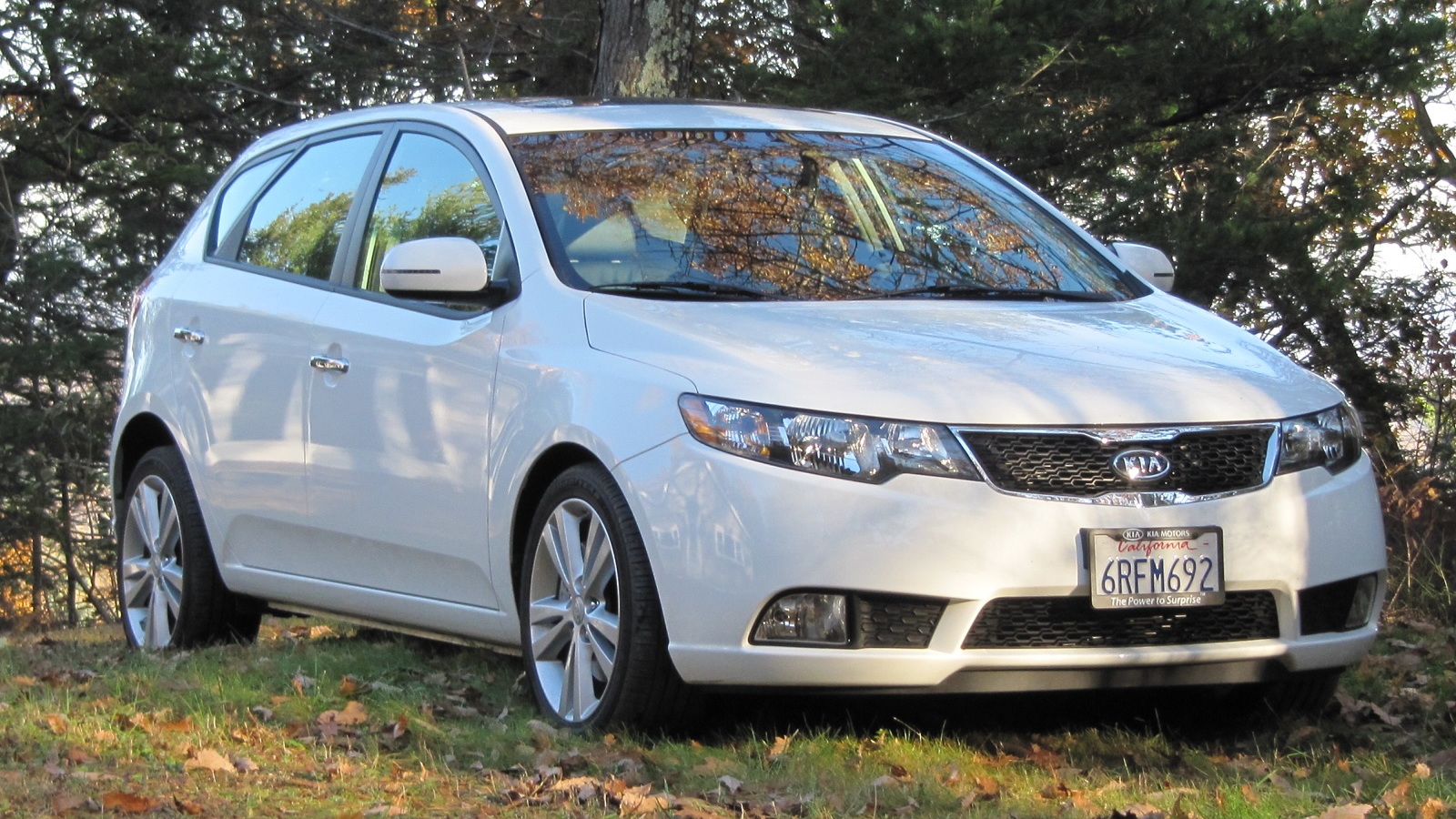 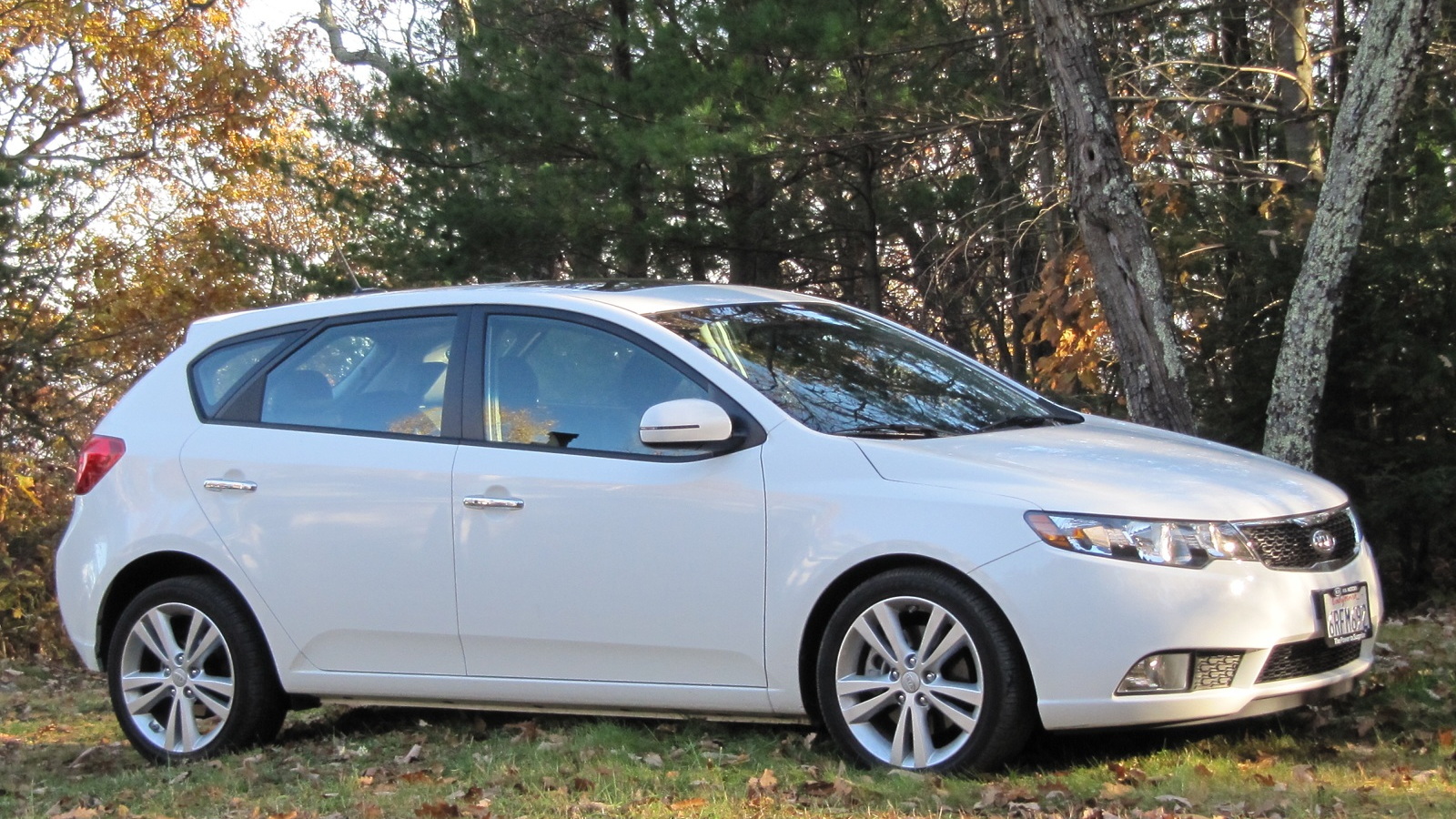 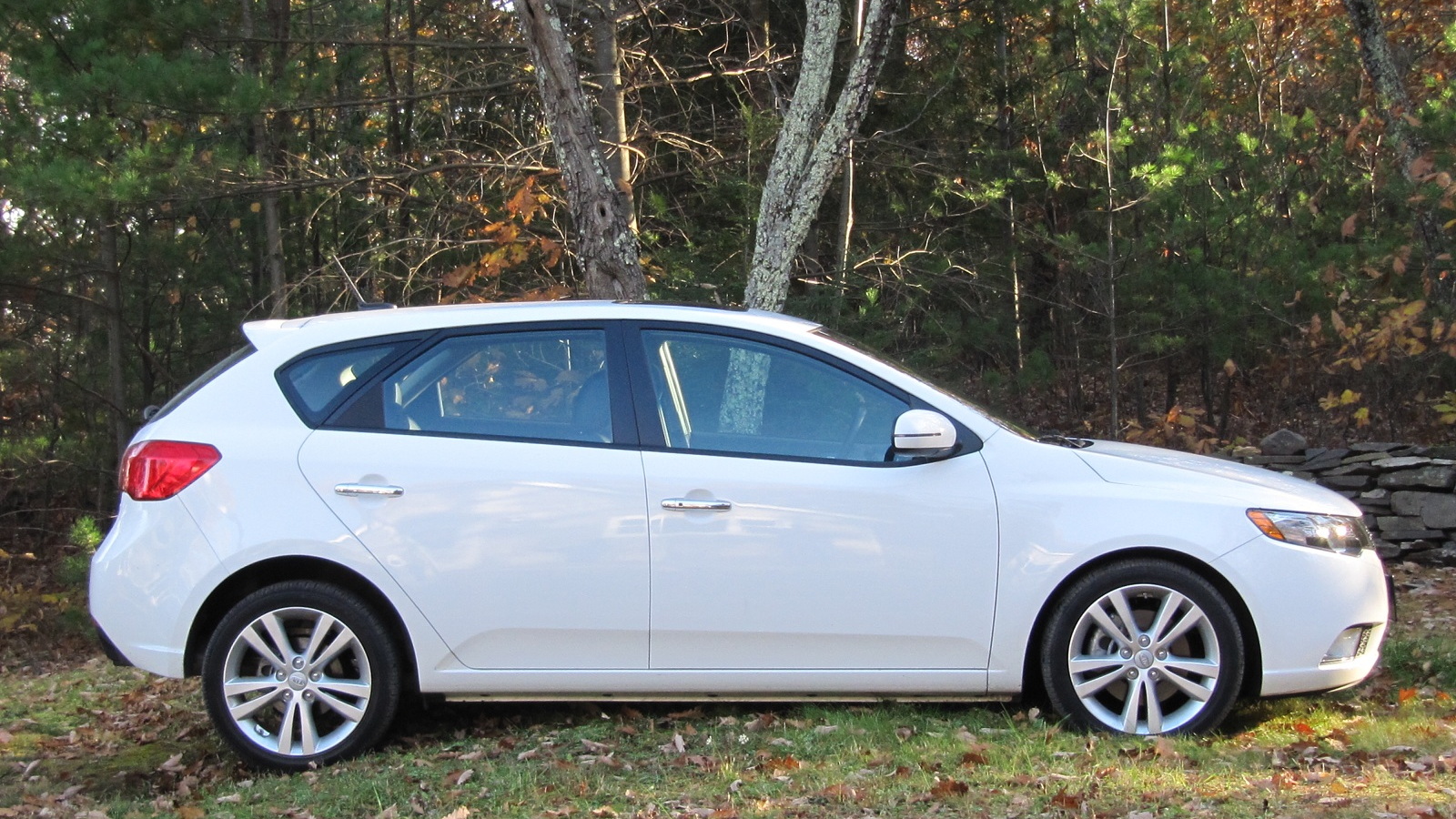 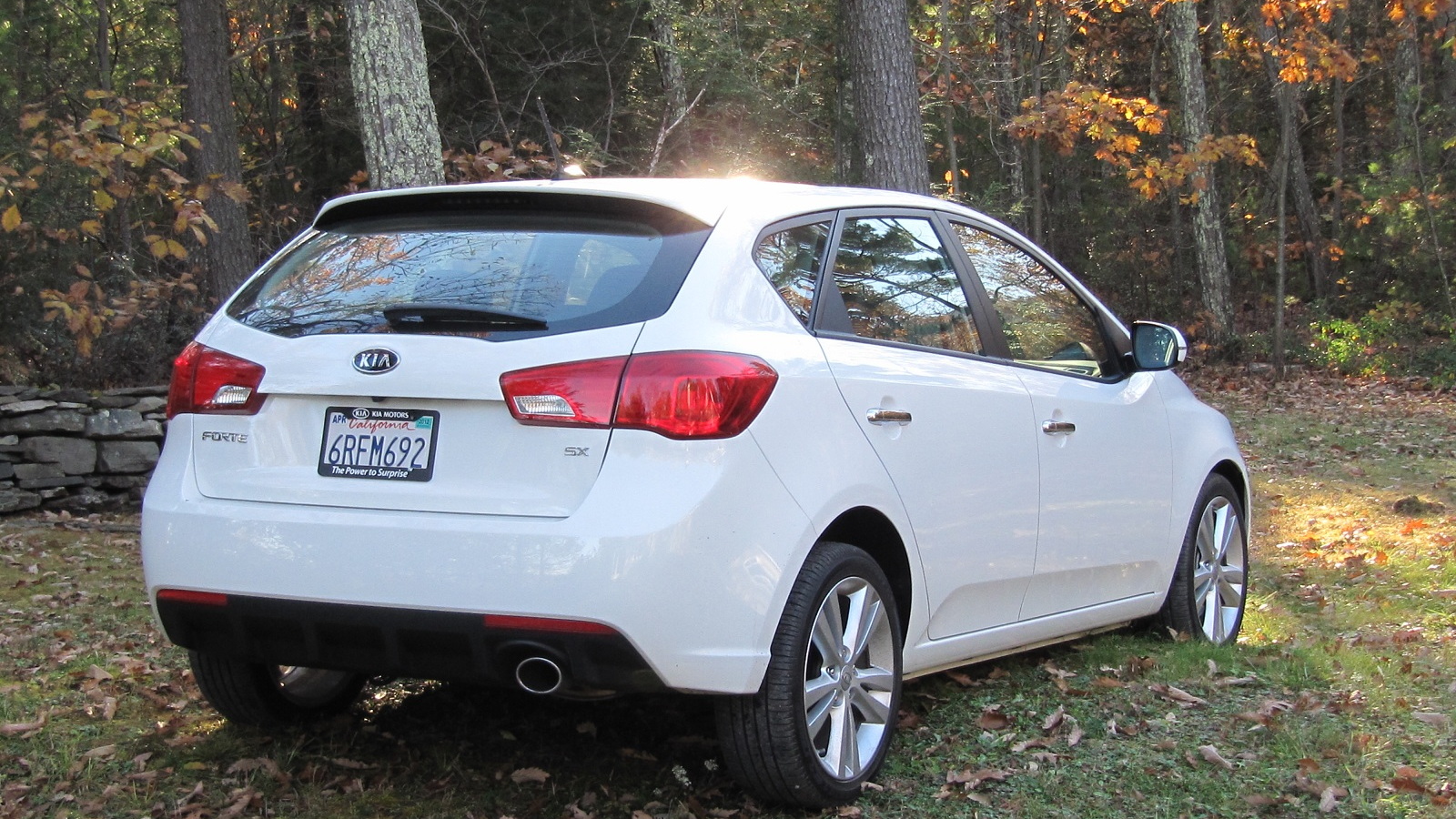 While it may come from the same company as the Hyundai Elantra, our 2011 Kia Forte hatchback weekend test car is nothing like that curvaceous, fuel-efficient compact.

Instead, the Forte is aiming for a kind of European performance niche--closer to a Volkswagen Golf or Jetta than the Toyota Corolla and Honda Civic the Elantra targets.

In that goal, Kia has pretty much succeeded. Our Forte test car was quietly stylish, with a no-nonsense interior and brisk performance that makes it easy to imagine using as a rewarding day-to-day driver.

We liked the styling of the 2011 Kia Forte, especially in its bobtail hatchback form. From certain angles, the sides look a little plain and slabby, but viewed from the side, the accent lines cut down the height of the sides.

It has few extraneous lines and curves, and would fit right into any European lineup. The front end, with a Saab-like clamshell hood, carries the characteristic Kia face with the pinched grille.

If there's a criticism of the exterior styling to be had, it's that the Kia Forte is borderline invisible. It's clean and crisp, but certainly doesn't stand out.

Inside, the dashboard is nicely contoured to break up the visual expanse. While it doesn't use many soft-touch plastics, it's elegant, uncomplicated, and functional.

The accelerator tuning on our Forte was so touchy and aggressive that we spun the front wheels on loose gravel or dirt several times. The ECO mode was actually easier for around-town driving, though we enjoyed the Forte's off-the-line performance in both modes.

Handling and roadholding was good, though compromised by numb electric power steering with very little feedback and not enough self-centering. It's a sadly common complaint, but it stands out more on a car that's so European in character (even if it was designed and built in South Korea).

The paddle shifters, perfectly placed behind the steering wheel, offered quick downshifts for those times when we needed to hustle the Forte along even quicker. It had less transmission lag than most cars these days, but though we didn't use them that much, it was good to have them available.

Our Forte wasn't rated particularly highly for gas mileage, with the EPA rating it at 23 mpg city, 32 mpg highway, for a combined number of 26 mpg.

And that was pretty much what we got. Over our first 140 miles, about two-thirds of it at highway speeds, we averaged 26.3 mpg.

For the final 120 miles, we turned on the "ECO" mode--which had blessedly little noticeable impact on the perky performance--and managed to eke out another couple of mpgs, for a final overall trip rating of 27.6 mpg.

The no-nonsense interior of the Forte was a soothing pleasure after a number of test cars whose swooping, over-styled interiors actually impeded finding the right controls quickly and obviously. And Kia's designers have obviously thought through the way drivers interact with instruments and knobs.

The AM-FM-satellite radio stereo and navigation systems were logical and easy to figure out, with a number of nice features, like a "mute" button to suppress audio commands from the navigation system. (We wish all manufacturers offered this).

The iPod interface couldn't have been more intuitive, and we liked the large circular on-screen ring of buttons for song selection--just like the ones on a remote control. The steering-wheel controls for audio volume and cruise control were equally intuitive.

The red-stitched black leather seats were comfortable, though adjustment was manual, not power-assisted.

The Forte's mostly hidden economy-car roots came through most clearly in one startling omission: In a vehicle costing almost $24,000, the driver's window offered auto-down only--no auto-up.

We pass through a lot of tollbooths in the Northeast, and we've always considered auto-up to be a safety feature. It prevents the driver from having to choose between keeping both hands on the wheel during acceleration into merging traffic and closing the window to prevent blasts of outside air.

No auto-up? RLY ??? And while we're at it, we could have dispensed with the fancy pedal design, which mixed shiny silver metal with rubber pads; plain old rubber would have been just fine.

That said, with 6,000 miles on it, our test car was well screwed together and we found no assembly flaws or quirks.

The rear-seat headrests block the view less than in most other cars, and the combination of a dropped window line in the front doors and a large rear window makes rear three-quarter vision better than most cars in the class.

Our 2011 Kia Forte SX hatchback carried a base price of $19,395. The Leather Package--leather seating surfaces, heated front seats, and an auto-dimming rear-view mirror--added $1,000, and the power sunroof added another $750.

On top of that, the "SX Technology Package" was a fancy name for an options bundle that included the navigation system, automatic temperature control, push-button start with proximity key...and, unexpectedly, the chrome trims on the door handles.

Adding in $695 of mandatory delivery fee, the bottom line came to $23,640.And the car came very close to being a good value.

We're just a tad puzzled at any car that offers red-stitched leather seats, but not auto-up on the driver's window.