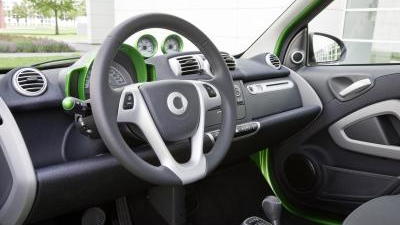 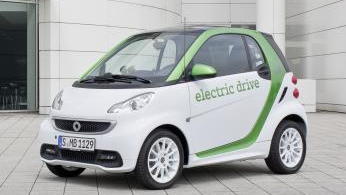 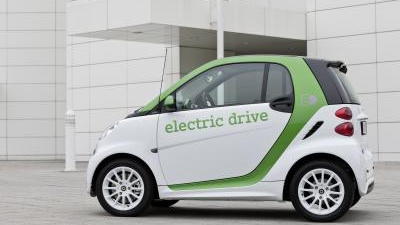 The 2011 Smart ForTwo Electric Drive may be the smallest, most compact highway-capable electric car on the market, but its pathetic top speed, sluggish acceleration, limited range and expensive price tag haven’t gained it many fans.

But that may all change in a little under a month as Mercedes Benz unveils a new, improved 2012 Smart ForTwo Electric Drive at the 2011 Frankfurt Motor Show.

For the record, that’s a little more power than  the European specification 2011 Mitsubishi i  can muster.

While that isn’t particularly fast, you probably need to know that the previous Smart ForTwo Electric Drive had a top speed of 62 mph. The new model will be limited to a barely-better 75 mph, but it may finally make short freeway stints feasible.

In its place is a 17.6 kilowatt-hour battery pack which Mercedes-Benz claims will enable the Smart ForTwo Electric Drive to travel up to 86 miles in city traffic on a single charge.

Perhaps the most interesting thing about the new Smart ForTwo Electric Drive however, is the inclusion of an optional 22 kilowatt on-board charger.  That’s more powerful than the charger found in the 2011 Tesla Roadster Sport 2.5.

Mercedes Benz claim this enables the car to fully recharge its battery pack in less than an hour, when connected to a suitable charging station, but we suspect in order to achieve such a fast recharge the car would have to be connected to one of the three-phase Menekes charging points common in Europe.

For U.S. customers? We know that the Smart ForTwo Electric Drive will recharge in under 8 hours from a standard Level 2, 16A charging station, but don’t know what options will be offered for fast charging, since most current level 2 charging are only capable of providing 7.6 kilowatts maximum power.

Also included for the first time will be full smartphone integration via Apple’s iPhone through an iOS application, built-in iPhone dock in the car and handsfree integration.

Called the Smart Drive App, the new application will enable owners to remotely control their car’s charging, climate control and battery from their iPhone as well as connect to their car through an online web portal similar to Nissan’s Carwings service.

If the specifications we’ve seen of the new Smart ForTwo Electric Drive are anything to go by the third generation of this diminutive electric car will be a whole lot more enticing than its predecessors.

With its massive on-board charger, it will no doubt be an instant hit with by-the-hour car clubs and rental firms in large metropolitan areas like New York, Los Angeles and Washington, D.C, but will it sell to consumers?

That will depend on the as-yet unannounced price.

We'll bring you complete coverage of the 2011 Frankfurt Motor Show, here, once it starts on September 13.