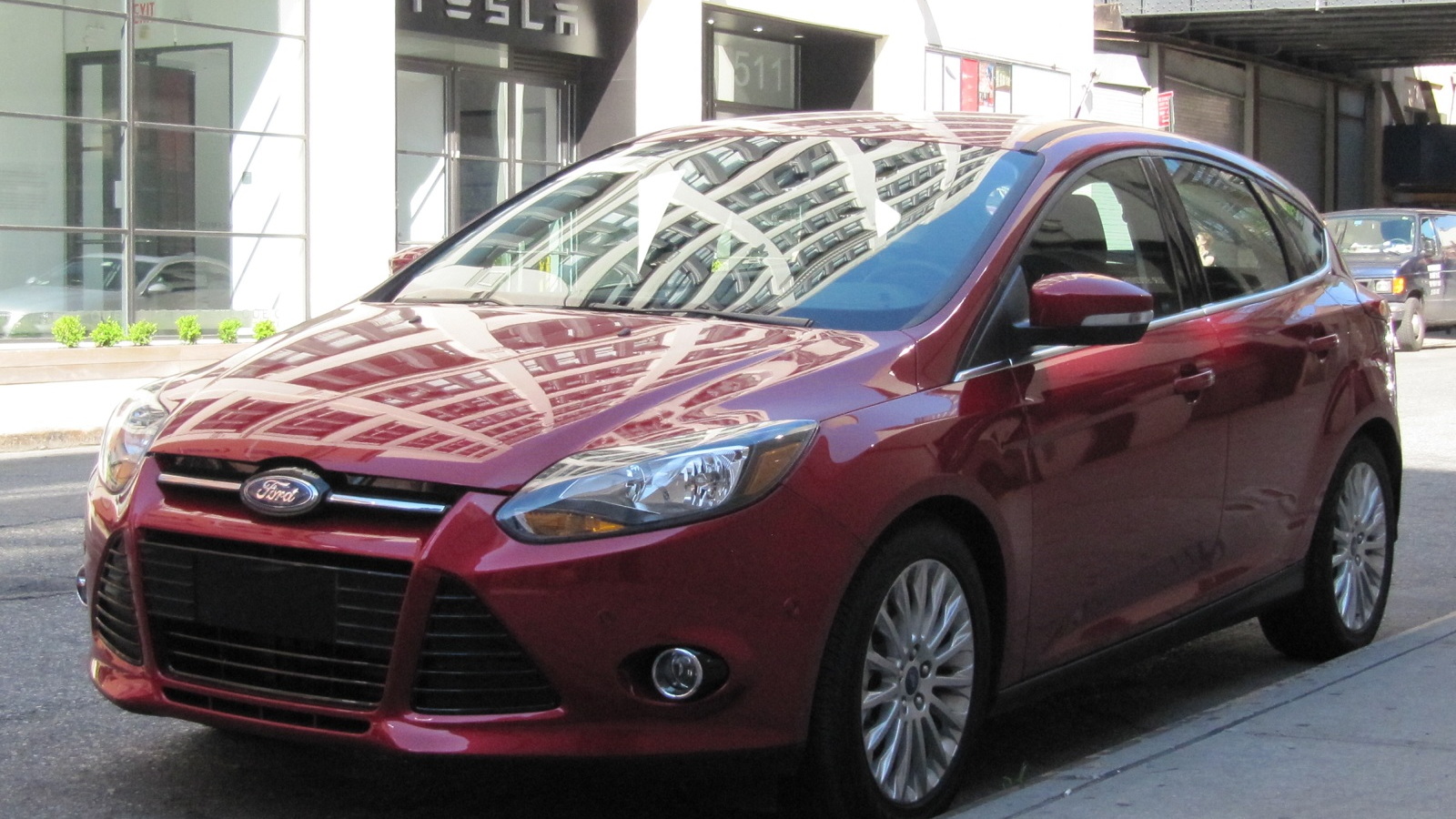 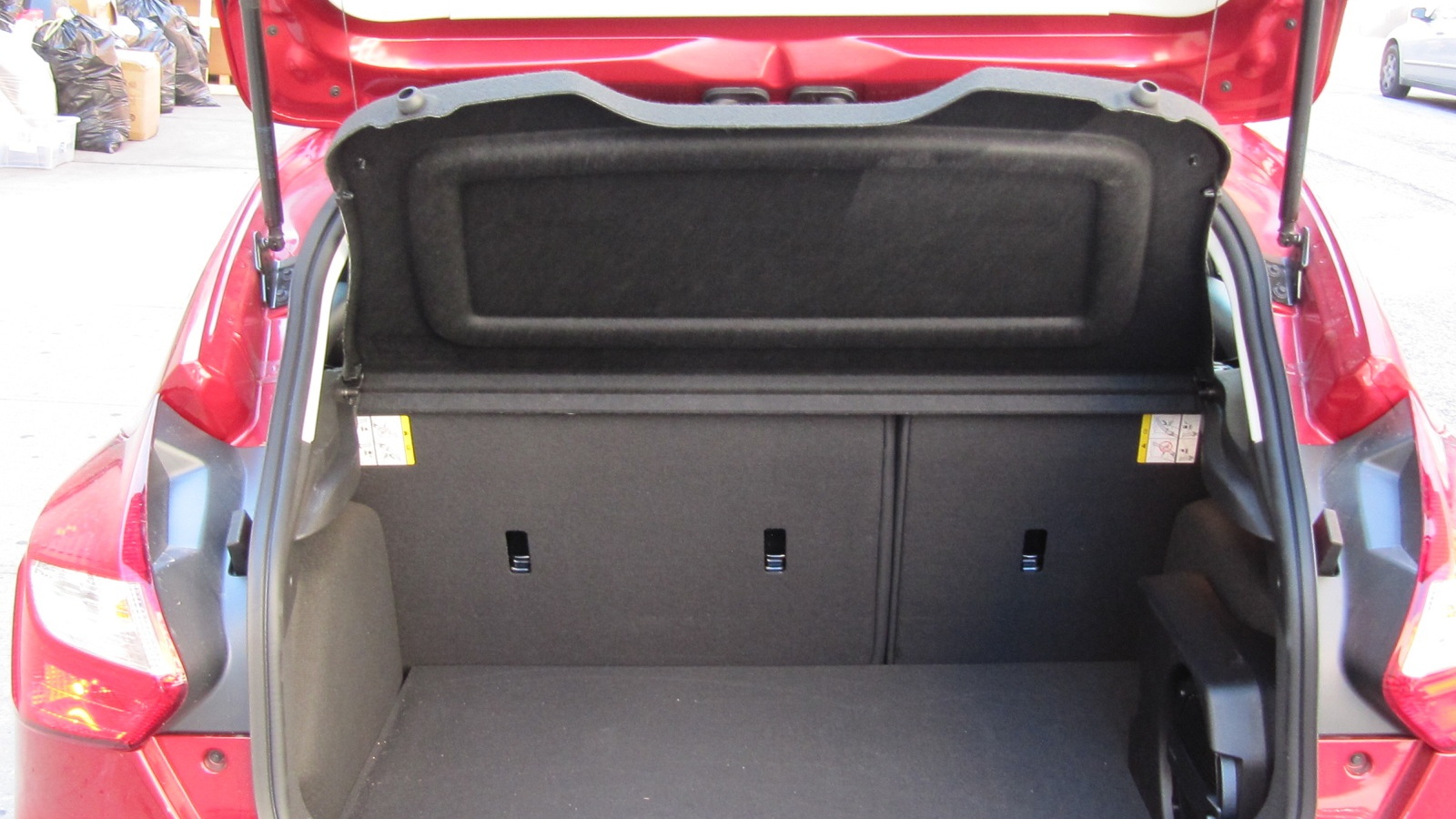 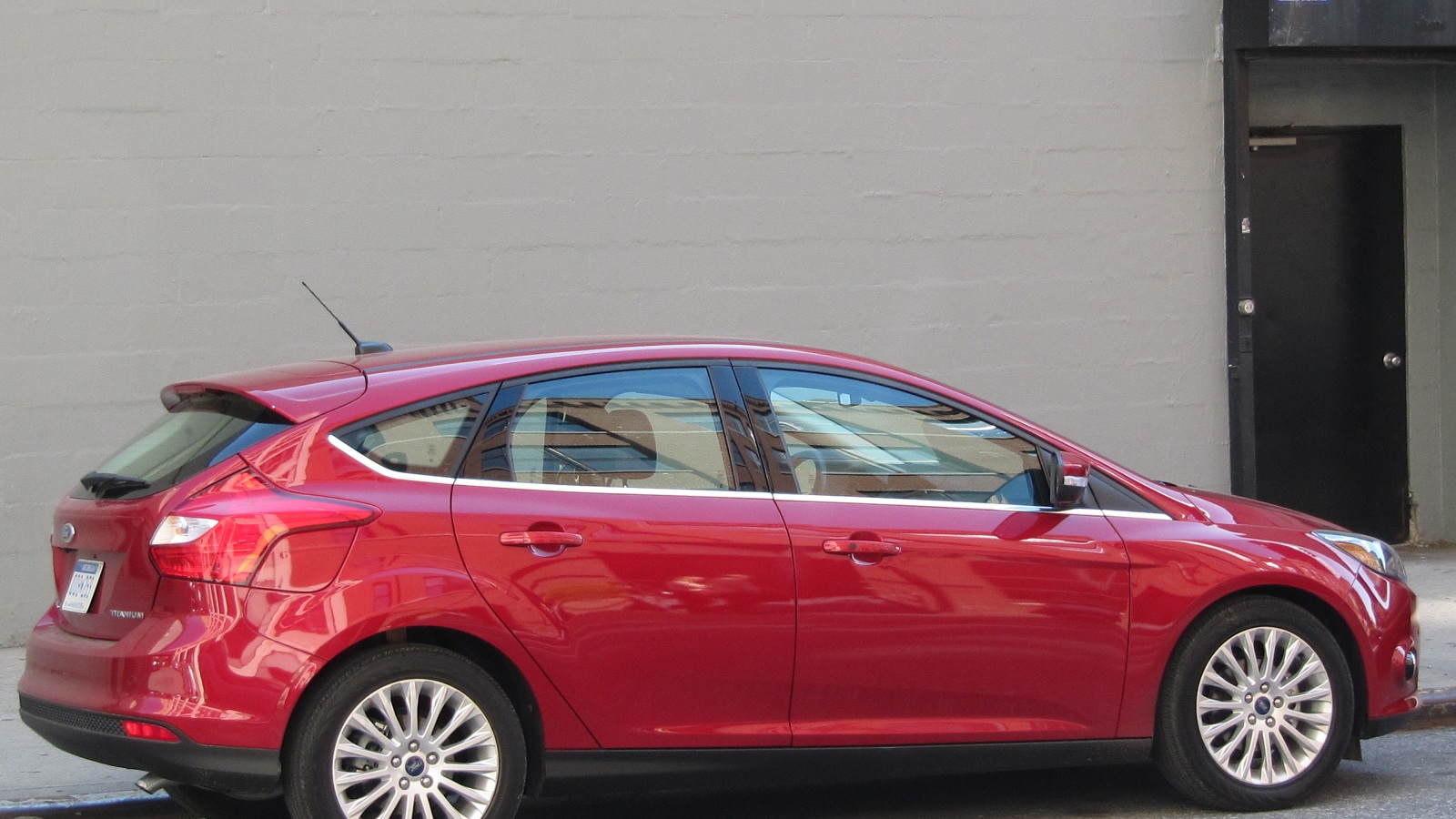 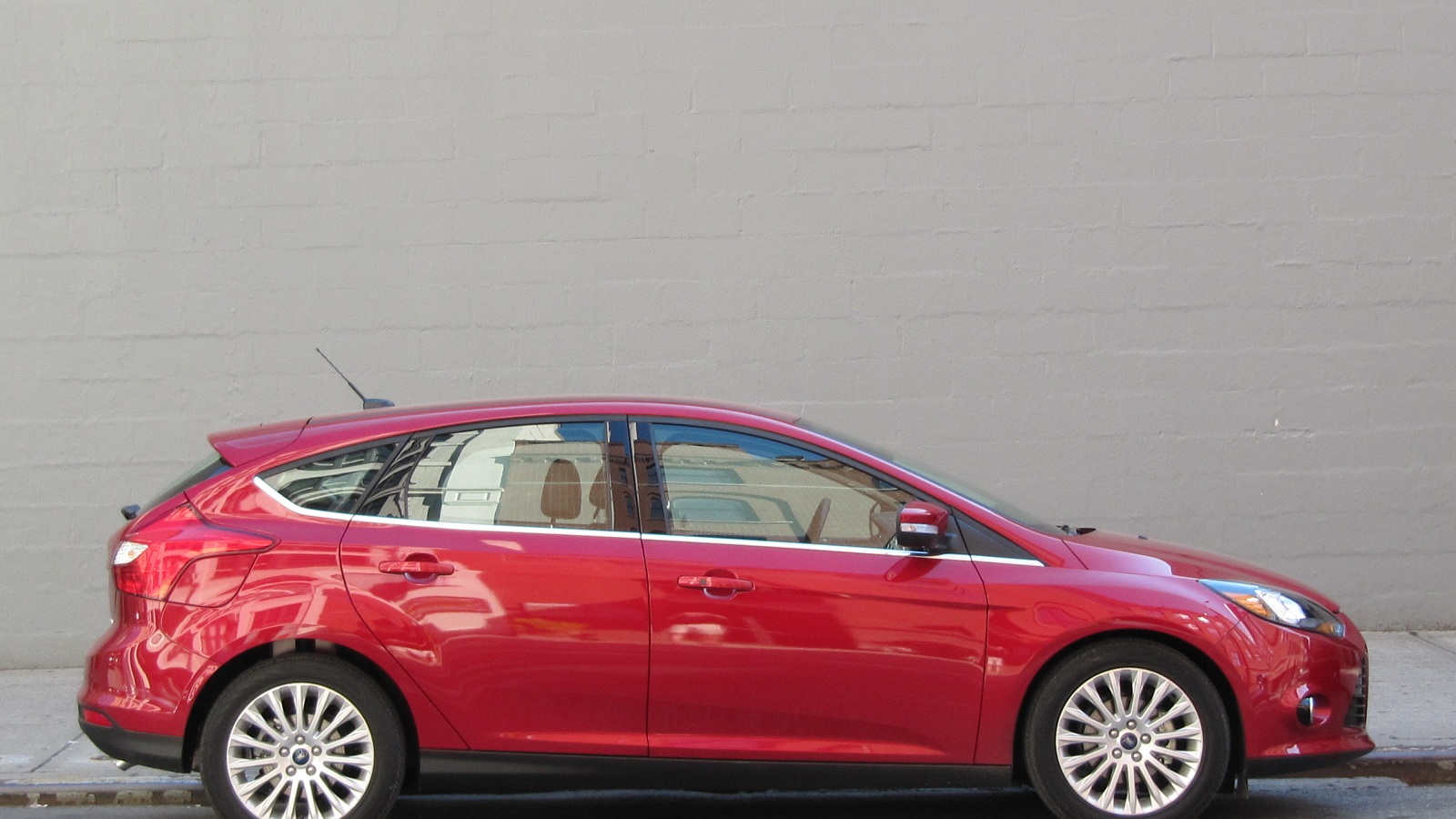 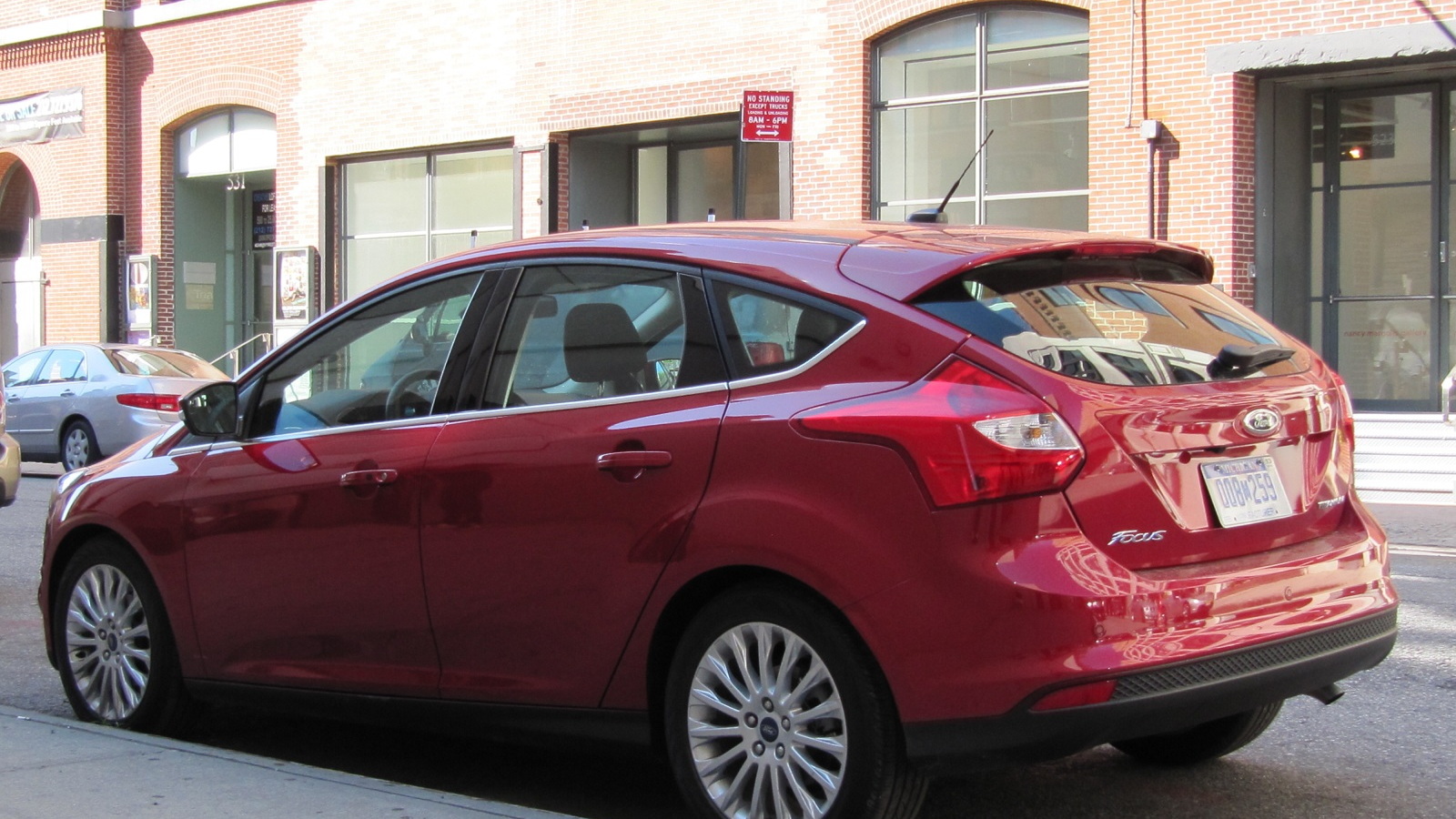 The lithe, modern styling of the 2012 Ford Focus makes it stand out on the street, even among vastly improved competition in the vital compact hatchback and sedan segment.

We tested a top-of-the-line Focus Titanium hatchback last month over a long weekend that encompassed 692 miles, the bulk of at highway speeds. But our route also included lots of small, winding mountain roads, where the Focus shines.

Overall, it's a comfortable and very modern car, with a plethora of electronic aids, some unexpected features, and a worthy competitor to the newly restyled Hyundai Elantra, the more sedate but very quiet Chevrolet Cruze, and the all-new but disappointing Honda Civic.

If our 2012 Focus had one flaw, it was the recorded gas mileage: a disappointingly low 28.8 miles per gallon. Granted, our car was loaded with extras, and we weren't particularly careful to drive economically.

But the standard five-door 2012 Focus with the six-speed PowerShift automated manual transmission is EPA-rated at 28 mpg city, 38 mpg highway, for a combined rating of 31 mpg. That's good, though it's hardly at the top of the class.

With a five-speed manual gearbox, ratings fall to 26 city, 36 highway, and 30 mpg combined.

Our mileage was low enough, in fact--lower than most other test drivers have logged --that we plan to re-test the Focus again soon, paying more attention to the on-the-road fuel efficiency.

For even higher fuel economy, the optional SFE version is rated at the all-important 40 mpg highway mark. The Focus SFE ups the combined average fuel-efficiency rating to 33 mpg, though it logs the same 28 mpg city rating as the standard car. You can thank some aero aids, higher gearing, and low-rolling-resistance tires for the extra MPGs.

The 2012 Ford Focus offers personality, many optional features, and styling that makes it both distinctive and modern.

The exterior is crisp and expressive, bordering on flamboyant, though we found our five-door hatchback to be a more coherent design than the four-door sedan, with its oddly high, short trunk. The Red Candy Metallic Tinted paint of our test car truly turned heads, and lifted the car completely out of the mundane-compact class.

Inside the Focus, the complex lines of the dashboard and instrument panel almost manage to make a multitude of controls, screens, and vents comprehensible and stylish at the same time.

Not quite, though. The radio controls on the base version can only be called cluttered.

The 2012 Focus offers just a single engine, a 160-horsepower 2.0-liter four. It's paired with a five-speed manual gearbox or Ford's six-speed PowerShift automatic manual transmission--essentially a pair of three-speeds with clutches that shift themselves automatically, and quickly.

The PowerShift option offers the option of shifting yourself, via +/- buttons on the shift knob, but if you keep the engine revs up, it delivers spirited performance. There's also the increasingly common "Eco" button, which remaps the engine and shifting control software to dial down the performance in favor of fuel sipping.

The 2012 Focus handles with the best of the compact class, which is probably the sporty Mazda3. And the electric power steering offers good feedback, which is far from the case in some other makers' cars. Its acceleration is average, but it simply feels good to drive, and the firm but supple ride will inspire confidence in drivers and their passengers alike.

The Focus may be as all-American as you can get--built in Wayne, Michigan--but it is a continual pleasure to drive, with taut handling that proves European auto engineers can build fun into the DNA of even utilitarian transport and get American drivers to like it.

All versions of the Focus are remarkably smooth and refined, though road noise seeps through more than we expected.

All of the 2012 Focus interiors all look good, but the top-level Titanium trim, which starts at $22,765, is almost over the top for a compact. (Is a Focus Titanium fancier than a top-of-the-line Cadillac Escalade Platinum, we wondered?)

The base front seats are good, but the upgraded sport seats covered in leather that come with the Titanium package are excellent. And there's enough head- and leg-room in the rear compartment for six-foot-and-over humans, which not every compact can claim.

The knurled rubber vent knobs are a nice touch, and the only hint of the Focus's European origins was the lock button--which we finally located on the center console, rather than on the front door panels.

The load bay in the rear is surprisingly large, and swallowed not only our luggage but several irregularly shaped boxes and bundles.

And despite our fears, the rear three-quarter vision was much better than we expected, and better than average for cars of this shape with rising beltlines. We did notice that the proximity sensor was set off by pedestrians crossing in front of the car--are there no pedestrians in Detroit?

Ford is offering the 2012 Focus in a remarkably wide range of prices, up to sums that would buy you a very nice mid-size sedan. A base 2012 Ford Focus S four-door sedan starts at $16,995, including destination.

But then you may start adding options, and if you succumb to the allure of the Titanium trim level in particular, it'll cost you. Ours included such nice features as auto-up on all four windows, dual-zone climate control, and a superb sound system--though the subwoofer took up a bit of floor space in the load bay.

The Titanium package gets you the MyFordTouch voice-activated control and infotainment system, a 10-speaker stereo, Sirius Satellite and HD Radio, and more. On top of that, you can pile on features like Ford's excellent Automated Park Assist, and before you know it, you've added another $10K to the total.

Our test car started with a $1,490 Titanium Premium package that included a six-way power driver's seat, rain-sensing wipers, and a rear parking-aid sensor that displayed in the dash screen.

Then came a $395 charge for the red paint (it's worth it), $470 for a Winter Package, $1,100 for the Parking Technology Package, and $795 for the MyFordTouch system that included satellite radio and the navigation system.

Adding a $725 mandatory fee for delivery, the sticker came to a whopping $27,740 before a pair of ill-explained discounts on the sticker brought it back down to $27,140. And for the record, this was a compact car without a sunroof.

Overall, we were impressed the 2012 Focus for its styling, the quality of the interior materials and trim, not to mention superbly comfortable (upgraded) seats.

We've long thought that Ford has the best graphics of any maker in its instrument clusters, and the new Focus upholds that judgment.

Finally, Ford's EasyFuel capless filler is so obvious that we're astounded no one thought of it before now. No cap to remove, fewer gas stains or smells, and one less thing to remember before driving away.

On the downside, we weren't impressed with the gas mileage, as noted above. (If you've driven a 2012 Focus for any length of time, let us know in the Comments below what kind of mileage you got.)

We were disappointed how little interior space there was for a pair of mobile phones, sunglasses, change and toll receipts, and so forth.

All of that stuff ended up in the cupholders--which are too shallow--but other makers (hello, Hyundai!) do a much better job of providing trays, cubbies, depressions, and slots for all the stuff we now carry into our cars and need at hand.

The PowerShift automatic transmission occasionally got caught out by idle creep, in which it essentially has to slip its clutch. Quick on and off brake and accelerator pedals to cope with stop-and-go traffic could cause it to lurch.

It's an adjustment issue, and we expect Ford will refine it, but it was the only indication that the transmission wasn't a conventional automatic.

The price of our test car felt high for a compact, though the Focus feels expensive, and we devoutly hope buyers no longer associate compact-class cars with "cheap." We also assume Ford has carefully calibrated how much buyers will pay for a nice new modern car with lots of features, compact or not, and priced accordingly.

But we can't leave the 2012 Focus Titanium without talking about MyFordTouch. It was ... BAD.

We'd seen the system demonstrated, and the idea of voice controls for common vehicle features makes enormous sense. This was our first chance to spend time with it, and we were looking forward to it.

It took exactly five minutes for our passenger to nickname it "MyFordOuch," and another five before we started swearing out loud at the system.

As presently constituted, MyFordTouch requires too much driver concentration, has nowhere near the necessary voice recognition, and includes some idiotic user-interface decisions that made it as frustrating to us as the worst voice-mail system employed by our nastiest financial services provider.

If you realize the system has misunderstood or is going down the wrong path, shouldn't a quick, "Stop!" halt MyFordTouch in its tracks? Nope. It goes on with its canned spiel, then asks you to repeat the choice you already know won't take you where you need to go.

Bizarrely, the in-dash touchscreen even required more pressure to register a command than the screen for Ford's earlier-generation Sync system in the 2011 Lincoln MKZ Hybrid we recently tested as well.

The system quickly passed beyond frustrating into infuriating. And then we ignored MyFordTouch for the rest of the 690-mile journey.

It hurts to say that, because the potential of the system is huge. Speaking is natural, and one day cars will respond as easily to spoken commands as they do today to knobs, sliding switches, and pedals.

But that day isn't here, yet, and as we tested it, we cannot recommend that anyone buy MyFordTouch.

That aside, we were impressed by the 2012 Ford Focus. It's a fully competitive compact car, of a sort Ford hasn't had for a decade or more.

It's stylish, comfortable, performs nicely, presents well inside (where you spend your time, after all), and seems to be very well screwed together.

We'd be happy driving one, though we're not sure we could justify $27K plus taxes for a Titanium version. We'll have to check whether that wonderful red paint is available on less exalted models.

And we do need to check that gas mileage again ....

Ford provided this test vehicle to High Gear Media to enable us to bring you this first-person drive report.