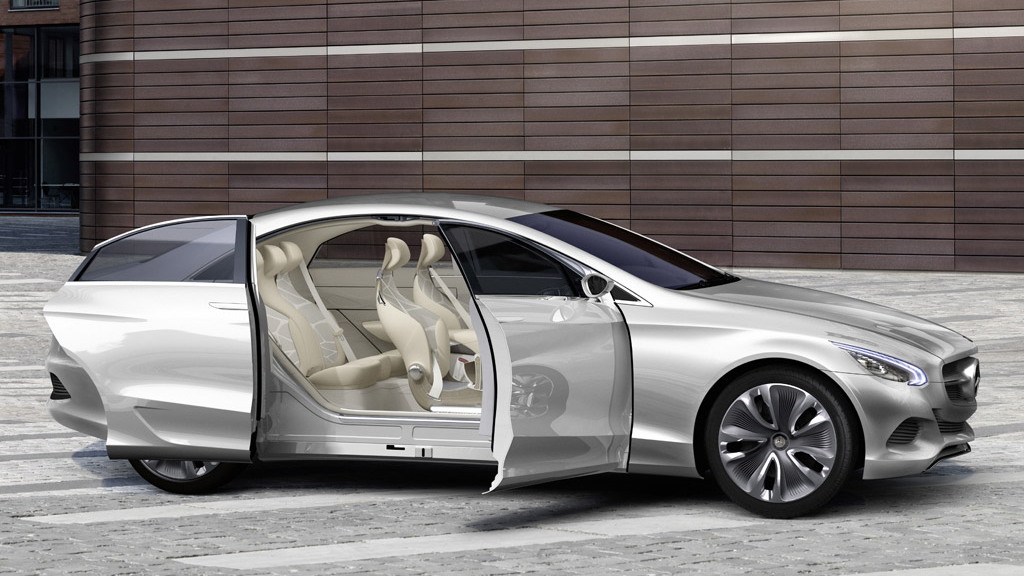 Mercedes-Benz rarely creates concept cars just for fun. Whether they're the "Vision" models that show up at the Frankurt Motor Show every other year, or lesser concepts for other shows, they always hold clues to what's coming down the pike with a three-pointed star.

For the 2010 Geneva Motor Show, the company's latest concept is the F800 Style, to be formally unveiled on March 2. It's a four-door coupe, the same style as the current 2010 Mercedes-Benz CLS, with five seats and a range of efficient drive technologies.

On the green side of the ledger is a platform that accommodates entirely different drivetrain technologies--in this case, a plug-in hybrid system with 18 miles of electric range, and a hydrogen fuel-cell system that powers electric drive motors.

The F800 plug-in hybrid's powertrain will be an option on the next generation S-Class in 2012. It pairs a 300-hp V-6 of unspecified size with a 80-kilowatt (109-hp) electric motor integrated into the front of a seven-speed automatic transmission.

The combination accelerates from 0 to 62 mph in just 4.7 seconds, with a top speed of 155 mph. It achieves speeds up to 75 mph on electricity alone, and the electric range of up to 18 miles lets it pass through zero-emissions zones anticipated in some European cities.

A new "Range on Map" function for the navigation system shows the limits on travel under only battery power, letting nervous drivers calculate whether they can travel in and out of an emissions-free zone on electricity.

The lithium-ion battery pack (quoted only as "more than 10 kilowatt-hours") is mounted under the rear seat. Mercedes-Benz quotes fuel economy of 81 miles per gallon, although mileage ratings for plug-in hybrids must always taken with a large grain of salt.

The hydrogen fuel-cell F800 uses a 100-kilowatt (136-hp) electric motor to power the rear wheels, with the fuel-cell stack mounted under the hood. The company quotes a range of 375 miles on hydrogen fuel stored in high-pressure tanks.

That same fuel cell will also be used in 200 Mercedes-Benz B-Class F-Cell vehicles, based on the current compact five-door "B Class" hatchback. Of those cars, 100 will be sent to the U.S. for testing in regions like California that have at least some hydrogen filling stations.

The long wheelbase, short overhangs, and flowing roofline of the F800 concept are clearly derived from the stunning full-size Vision F700 concept sedan shown at Frankfurt in 2007.  That car too offered wide-opening rear doors without a B-pillar, giving unparalleled access to the long cabin.

On the F800, the rear doors are suspended from an interior swivel arm, allowing them to pivot out and slide backward when opened. While Rolls-Royce, among others, offers rear-hinged rear doors (or "carriage doors"), Benz would be the first volume maker to do so.

The "emotive design idiom" also has echoes of last year's  trio of BlueZero alternative-fuel concepts shown at the 2009 Detroit Auto Show, though the F800 Style is a longer, sleeker shape likely to have far better aerodynamics.

Design chief Gordon Wagener has said the company wants to continue raising the design standard of its cars, which critics say have become tauter and more muscular in recent years. Many expect that the F800 previews the next Mercedes-Benz CLS four-door coupe.

All but autonomous driving

Like all Mercedes-Benz concepts, the F800 Style previews new safety, comfort, and display technologies likely to show up in Benz products starting in 2012 or so.

Mercedes-Benz was one of the pioneers of adaptive cruise control, and the latest version of its Distronic Plus system includes a new Traffic Jam Assistant capability that all but lets the F800 Style drive itself through l0w-speed traffic.

This lets the F800 Style automatically follow a vehicle along a curved road at speeds up to 25 mph, including in thick traffic, without the driver having to steer--as long as the driver's hands remain on the steering wheel (to prevent texting, perhaps?). Above 25 mph, the steering assistance gradually abates and the driver takes over.