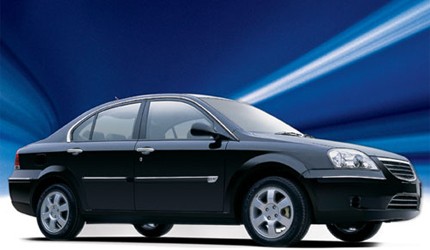 Miles Electric Vehicles is ready to reveal its electric sedan on June 3rd.

This much anticipated vehicle will be a fully electric sedan capable of obtaining highway speeds and is expected to reach mass production in 2010.  We have previously reported about this vehicle several times including the most recent article listed here  Miles EV Undergoes Crash Testing .

What is new at this point is confirmation that this vehicle will indeed be based off of the Saibo sedan made by China's Hafai Auto Group.  However, Miles will certainly make some changes to the exterior and interior of the vehicle.  They have released a small photo showing what would be the gas filler door and that now includes an emblem that shows the car requires no gas.

Miles plans to begin limited production of the vehicle in 2010.  The EV sedan is not yet named and should be priced below $45,000 before incentives.  It will use an iron phosphate battery that is capable of providing 100 miles of range on a single charge.  The company is looking for production numbers of 3,000 units in 2010, followed by up to 20,000 units in the near future.

The vehicle will be released in California first before expanding across much of the nation as the dealer network is established for the vehicle.