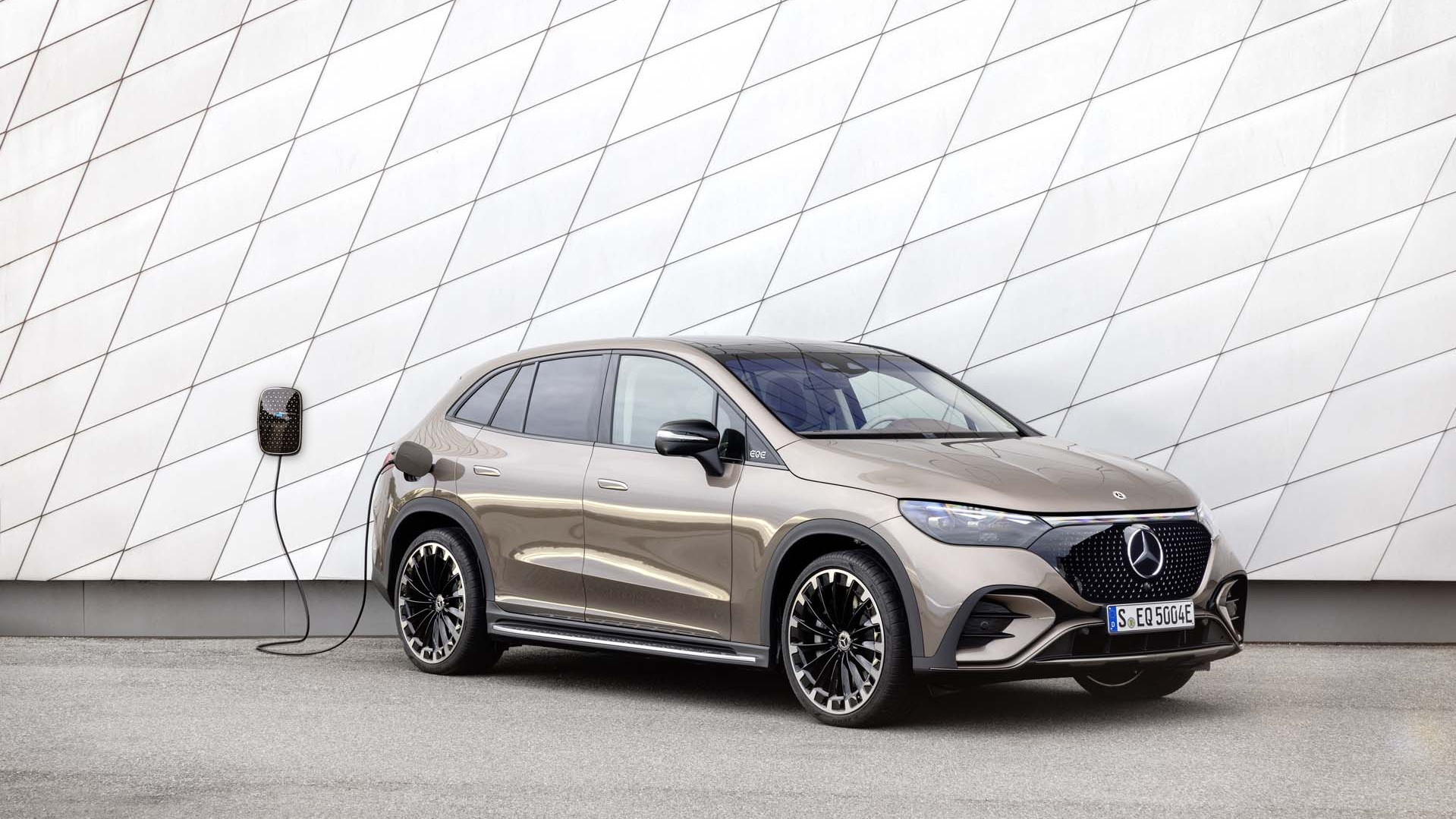 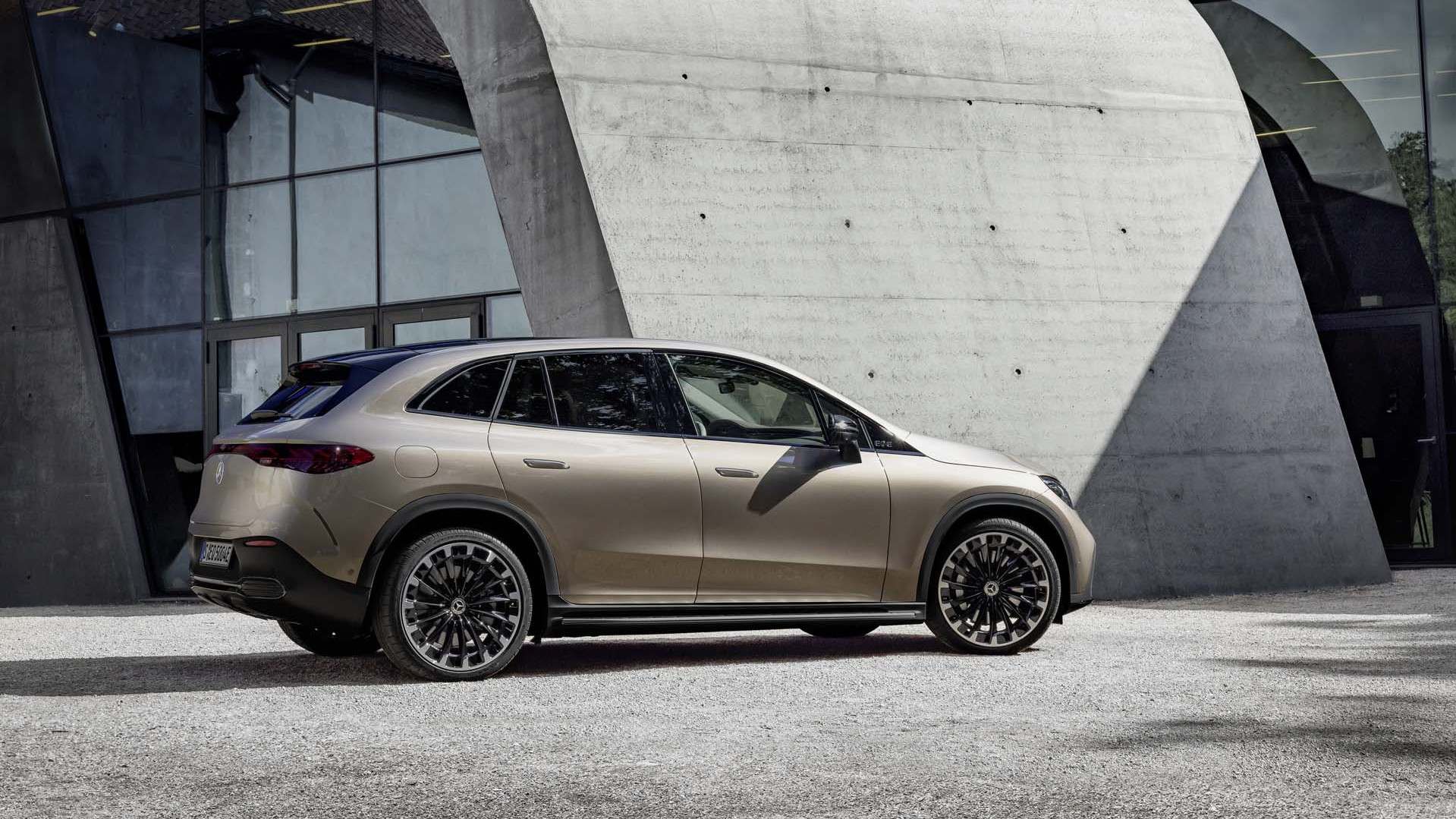 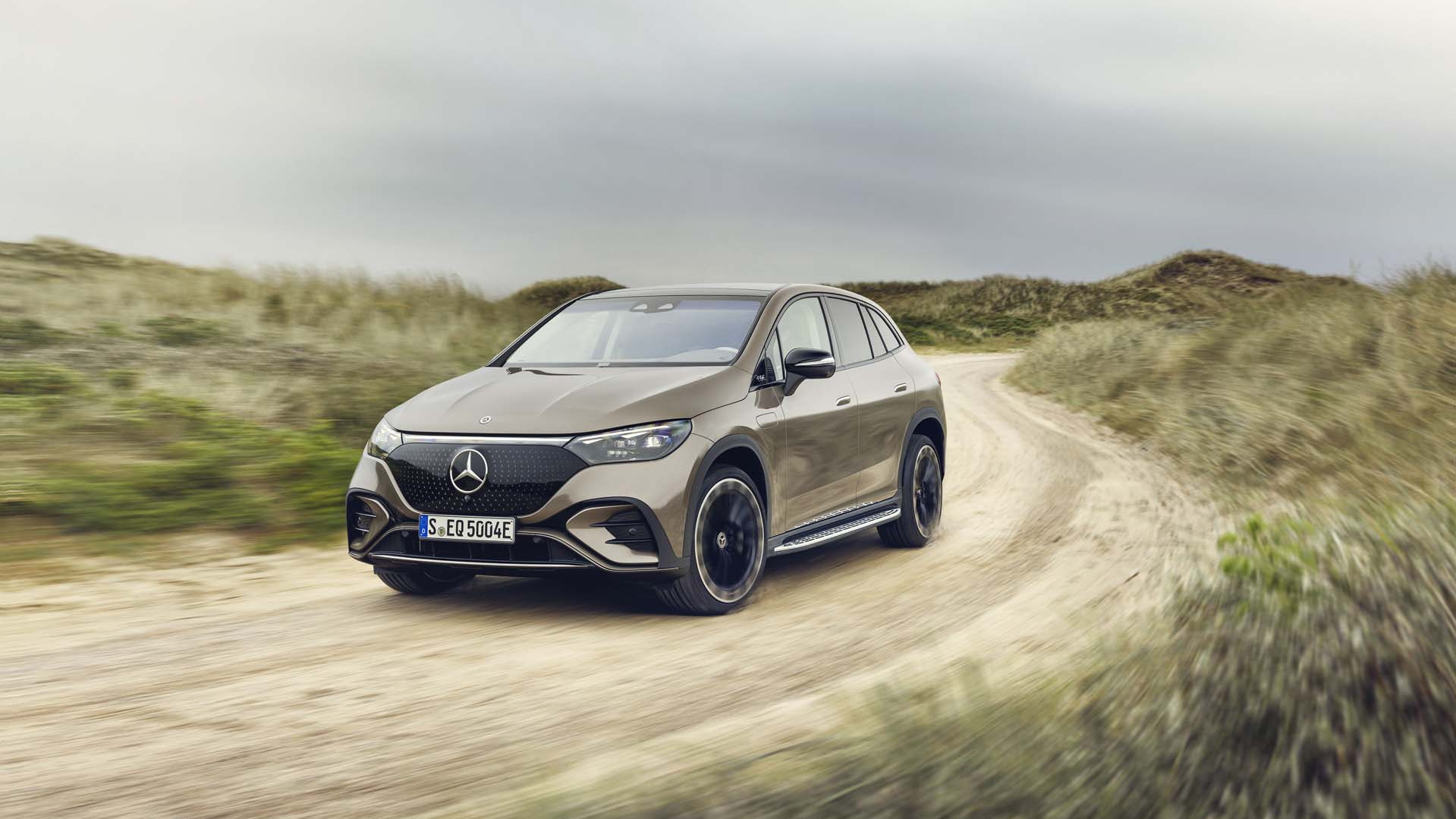 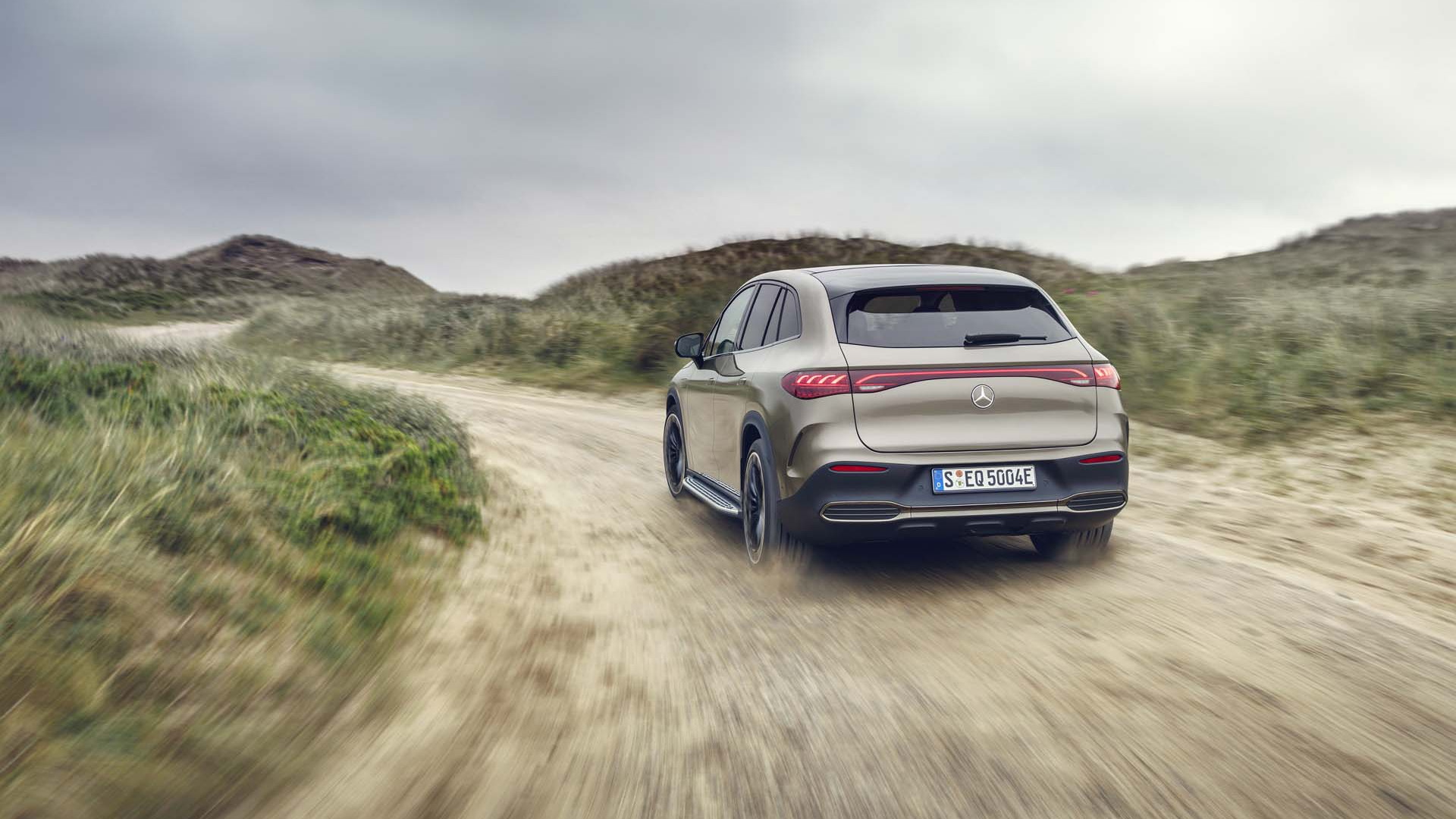 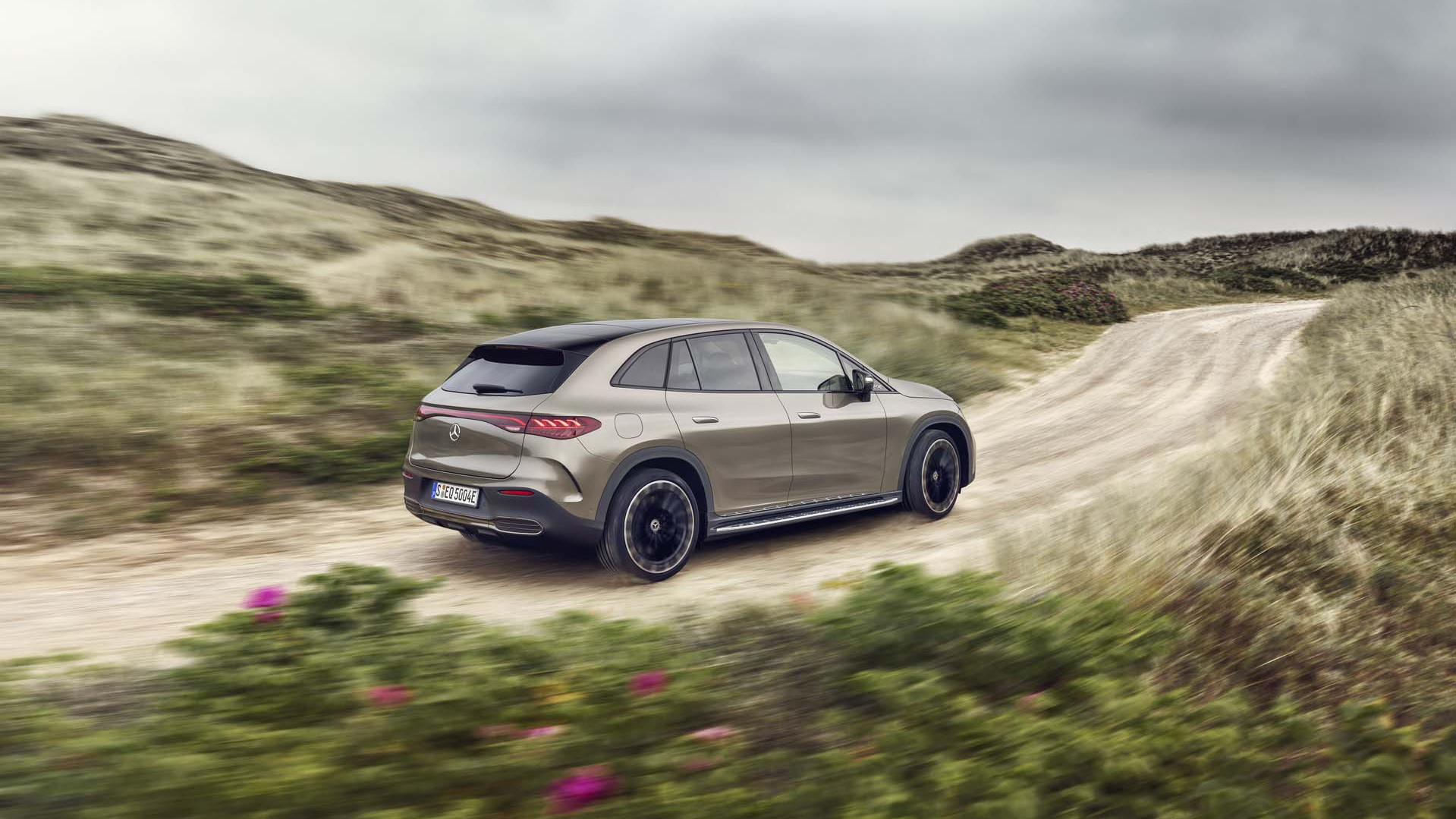 A new performance variant fills out the growing electric crossover SUV offerings in the Mercedes-Benz EQ family. The 2023 Mercedes-Benz EQE SUV unveiled Sunday in Paris, France, will be followed by the 2024 EQE SUV AMG with an estimated 0-60 mph time of 3.4 seconds, Mercedes announced Sunday.

The smaller proportions and lighter weight might not translate to greater range than the EQS SUV. Instead of the larger 108-kwh battery pack standard in the larger EQS SUV, the new EQE SUV uses the 90.6-kwh battery in the EQE sedan. The battery feeds permanent magnet motors in essentially four configurations.

A single 215-kwh motor drives the rear wheels in the base EQE 350+, making 288 hp and 417 lb-ft of torque. Mercedes estimates a 0-60 mph time of 6.3 seconds in its lightest EQE SUV. Mercedes only disclosed the weight on its heaviest model, the 5,930-lb EQE SUV AMG. Estimated range hasn't been disclosed either, but the 550-kilometer range on the WLTP European emissions testing cycle translates to about 305 miles on the EPA scale.

Range will decrease as shoppers climb the trim ladder. The EQE SUV 350 4Matic adds a motor up front for dual-motor all-wheel drive and a boost to 564 lb-ft of torque with an estimated 0-60 mph time in 6.2 seconds.

Equipped with two AMG-specific motors (Mercedes hasn’t disclosed the size) generating 617 hp and 701 lb-ft of torque, the EQE SUV AMG matches the specs of the forthcoming AMG EQE sedan. The AMG Dynamic Plus Package boosts output to 677 hp and 738 lb-ft of torque, and a 0-60 mph time of 3.4 seconds.

Mercedes estimates the AMG model can recoup up to 100 miles of range in 15 minutes with DC fast-charging. For other EQE SUV models sharing its 400-volt architecture, fast-charging at up to 170 kw would take 32 minutes to charge the battery from 10% to 80%.

A home or destination charging station with a 240-volt output at 32 amps can charge the battery to full in 9.5 hours through the 9.6-kw onboard charger.

The first EQ Mercedes to employ a standard heat pump, the EQE SUV recycles the waste heat from the drive system to heat the cabin instead of using the battery, and it conserves energy on battery preconditioning as well.

A regenerative braking system has four levels selectable via paddle shifters; in our testing of other similarly-equipped EQ models, it can go down to a stop for one-pedal driving, but it also affects the throttle feel, which takes some getting used to.

An optional air suspension with adaptive dampers comes with all-wheel-drive models, which add an Offroad mode to the Eco, Comfort, Sport, and Individual modes. Optional rear-axle steering of up to 10 degrees adds some agility or stability, depending on speed. It's limited to 9.0 degrees on the AMG due to the wider track and larger available wheels.

Pricing hasn't been announced but the standard 2023 Mercedes-Benz EQE SUV 350+ isn't as well equipped as the base EQS SUV, which has a starting price that exceeds $105,000. Pricing for the EQE sedan has not been announced either. Expect prices to be finalized before the early 2023 sale date for the 2023 EQE SUV. The AMG variant is expected in the middle of the year.