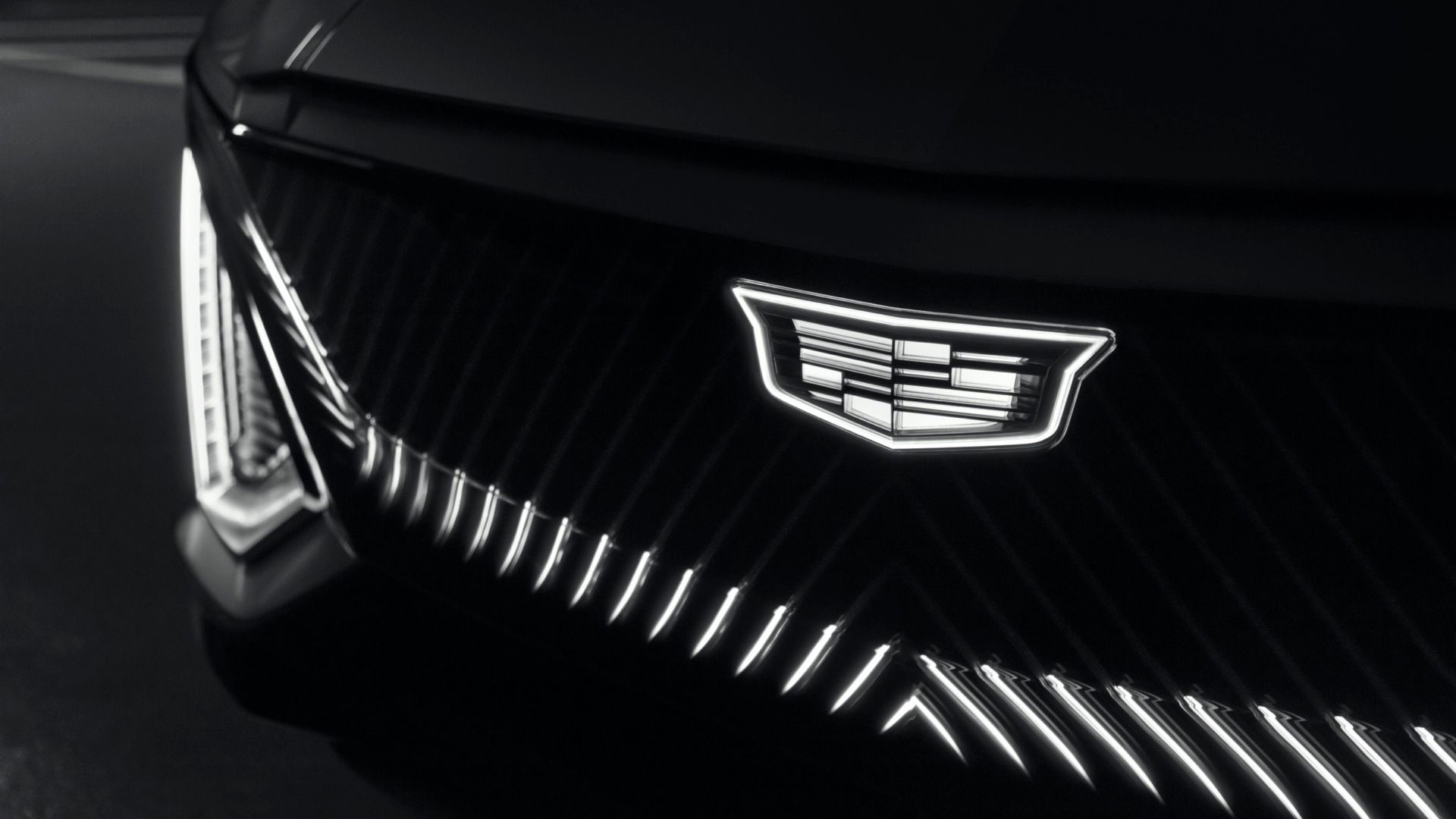 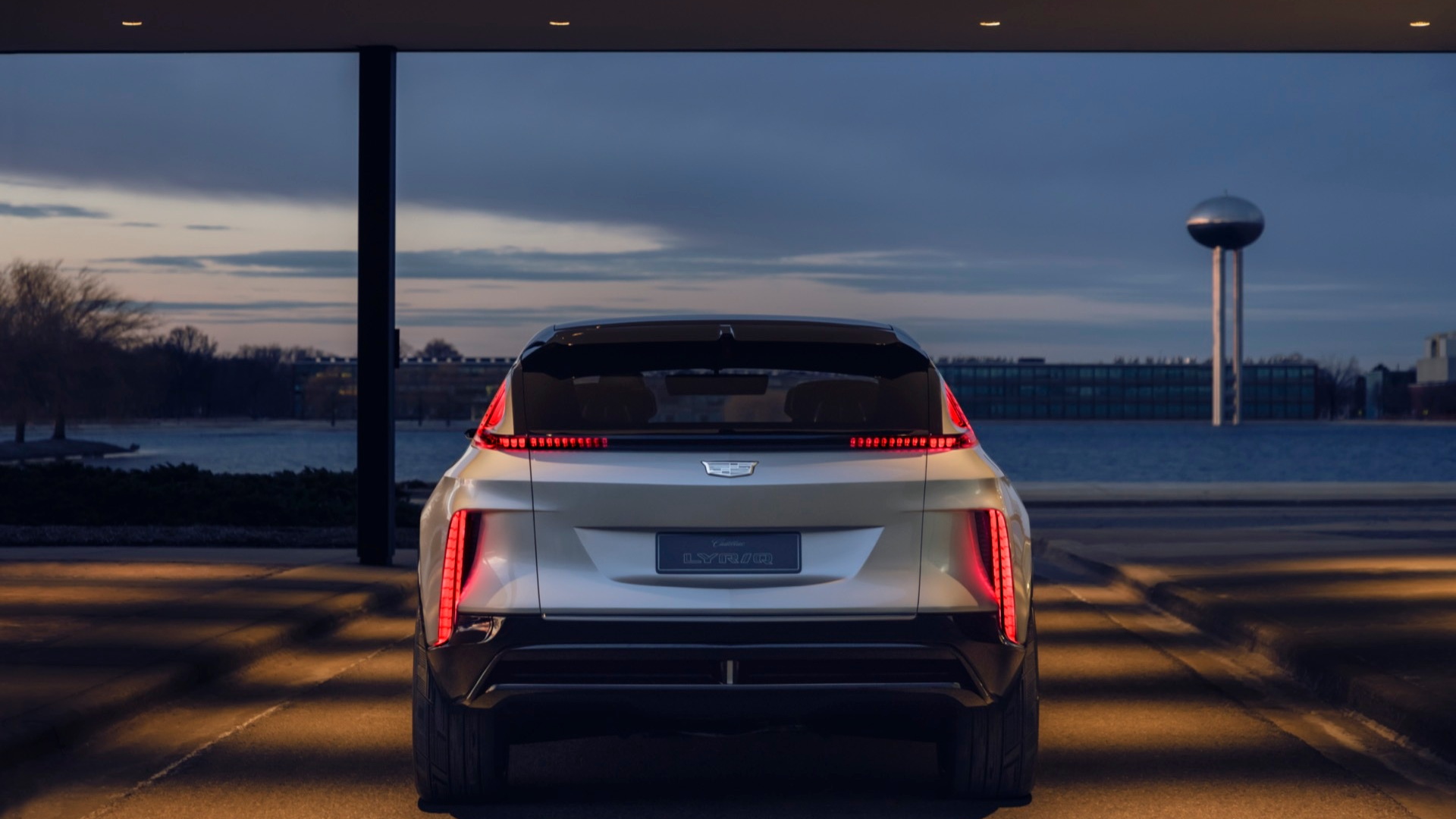 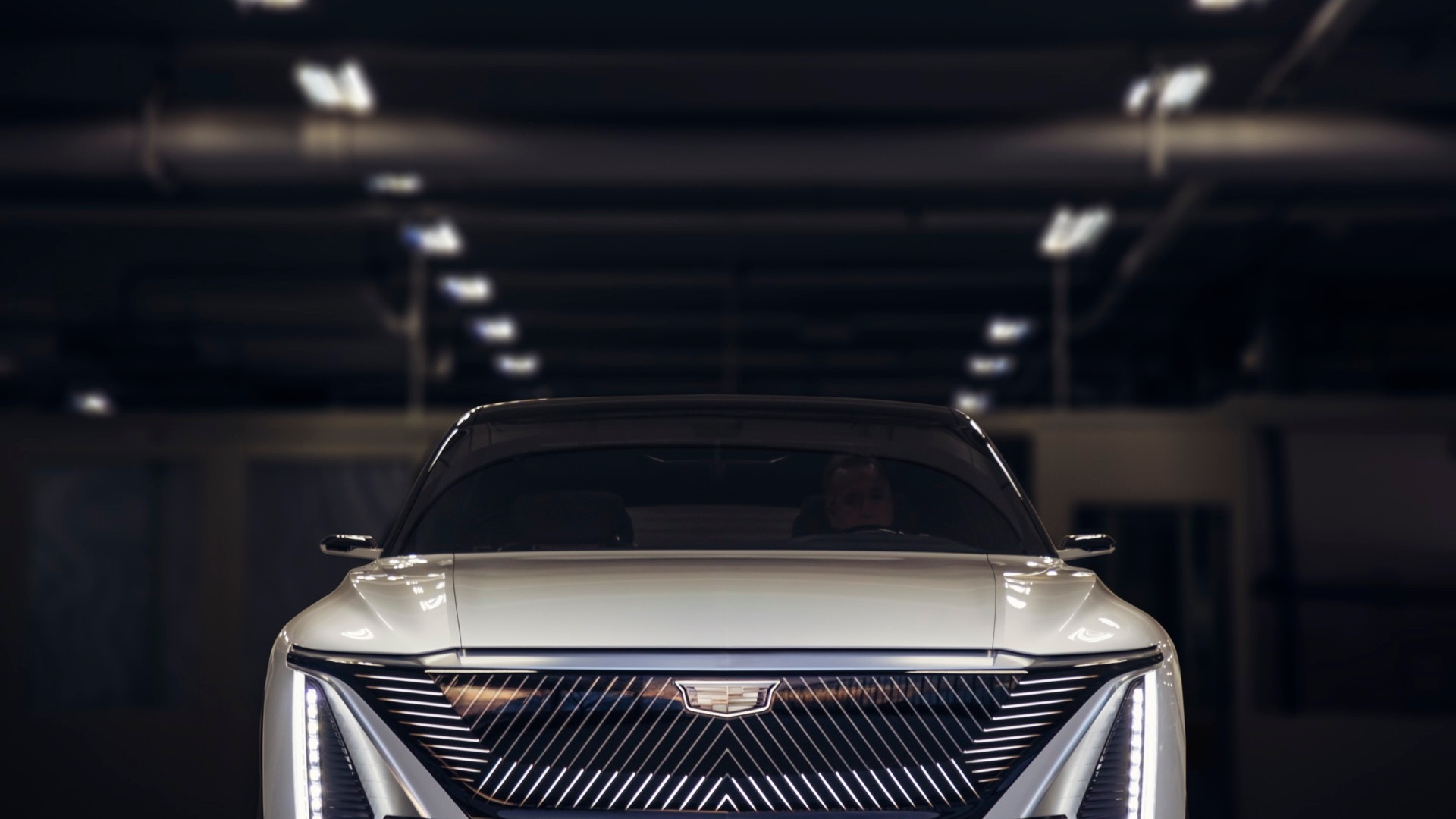 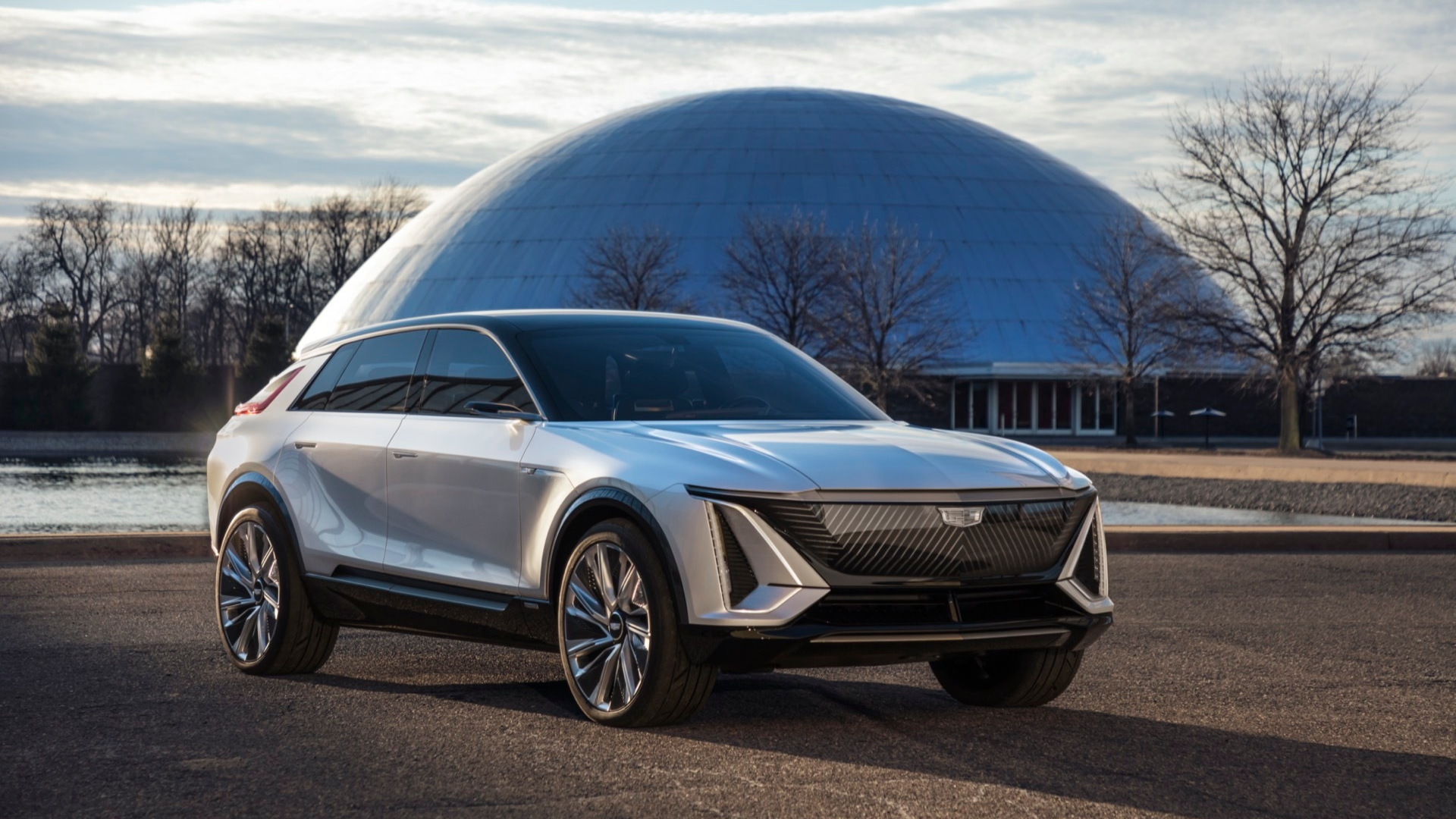 The Lyriq will be the first of many EV models—many of them ending in -iq, pronounced “ick,” not “eek”—slated to transform Cadillac by the end of the decade to a primarily all-electric brand. And it could be a significant portion of GM’s aspiration to produce 1 million electric vehicles a year by 2025.

With the reveal, GM confirmed a late calendar year 2022 introduction to the U.S. for Lyriq. Cadillac hasn’t yet confirmed where it will be built, and it has stepped back from previous remarks that it might go on sale earlier in 2022 for China.

Fundamentally, the Lyriq is a further development based on the renderings that Cadillac showed in January 2019 at the Detroit auto show. Cadillac called the Lyriq a "show car"; something closer to production than a concept car, but not quite a prototype. The brand confirmed that the vehicle revealed reflects about 80% to 85% of the final production vehicle.

GM also disclosed a number of details about the production-bound vehicle, which remains more than two years away. Although it will be built on the unibody layout for GM’s BEV architecture and Ultium propulsion strategy—likely with new LG Chem large-format cells sourced from a joint-venture Ohio plant—chief engineer Marty Hogan emphasized that the project takes advantage of “everything we’ve learned from Bolt and Volt and all of our previous EV programs.”

Hogan confirmed that in the unibody layout for GM’s BEV3 architecture and Ultium propulsion strategy, the battery will be a structural element of the vehicle, helping enhance crash protection, body stiffness, and everything that’s associated with that—like ride and handling characteristics.

Hogan also said that the Lyriq will leverage the advantages of an electric-vehicle layout for ride and handling “more than anything before” from the automaker. It will have a very low center of gravity, due to the flat battery pack, and it will have a near-perfect 50/50 weight distribution in dual-motor all-wheel-drive form, GM confirmed, which suggests the weight distribution will be somewhat rear-biased in rear-wheel-drive versions.

Cadillac hasn’t yet disclosed performance specifications or the specific battery capacity of the pack used in the Lyriq, but it says that it will offer “beyond 300 miles” of EPA range and approximately 100 kwh. On a follow-up Hogan said that “our objective will be to do everything we can with range,” but he emphasized that it’s still in the development phase of the program.

With 150-kw DC fast charging already announced, expect its road-trip times to be about on par with the Ford Mustang Mach-E—in the vicinity of 30 minutes for an 80% charge. Cadillac said that it will offer AC charging up to 19 kw, which could potentially offer home charging in just a few hours. While GM didn’t detail how such a system, which might require a 100-amp circuit, might work, but said the possibility would offer as much versatility as owners might want and the upgrades will be supported by its Qmerit home-installation partner.

On the outside, the Lyriq shows a new face for Cadillac—with light-piped elements pointing inward, and flaunting the first use in a modern Cadillac of a vertical headlight design. At a time when crossovers are taking two design routes—between chunkier and more squared-off versions and curvaceous, tapered-roof “coupes”—the Lyriq follows a middle ground. The vertical lighting, combined with a proportionately wide track and huge 23-inch wheels, gives the show Lyriq an uber-grounded stance that might be one departure in a more pragmatic production version.

A 33-inch angled-and-curved LED touchscreen sits atop the dash, with a horizontal layout. Its positioning reflects the arc at which the driver can comfortably reach the screen, confirmed designer Andrew Smith, who pointed to details like a cantilevered center-console door and a jewel-box-like tray at the bottom of the center stack.

GM confirms that the Lyriq is sized similarly to the current Cadillac XT5, which is about 182 inches long and 75 inches wide.

(I sat in the back seat of the show car at GM’s EV Day in March, where analysts, dealers, and media were given a no-cameras preview, and see it landing in the same competitive space as the Audi Q4, which I’ve also been inside in its show version. Both models feel a size larger, partly because of their low floor and spacious, relatively uninterrupted cabin layouts.)

Cadillac also said that the Lyriq will get “the latest version of Super Cruise,” GM’s driver-assistance system with a range of features including automated lane changes on a network of 200,000 limited-access highways mapped into the system. The Lyriq will also offer a feature that GM is so far only calling “supervised remote parking” that allows parallel or perpendicular parking when the driver is inside or outside the vehicle, but something short of the partly unsupervised moves owners routinely attempt with Tesla’s Smart Summon.

A dual-plane augmented reality-enhanced head-up display will help provide useful features such as navigation assistance projected right onto the windshield.

Cadillac says that its app is going through another rethink, especially for Lyriq. With the EV, it will offer settings that will automatically adjust cabin and seat settings ahead of anticipated vehicle use, for instance.

There will be a lot to compare the Lyriq to by the time it arrives. With its late 2022 arrival, it will appear two and a half years after the Tesla Model Y, nearly two years after the Ford Mustang Mach-E and Volvo XC40 Recharge, and more than a year after the Audi Q4 E-Tron and BMW iNext. In other words, it sure won’t be first.

Pricing could be one of the keys to the Lyriq’s success—or, with a nod to the Cadillac ELR, its failure. Some rivals are mentioning affordability in the message, and that’s not a message we’ve been hearing from GM. While the Mustang Mach-E has been built with that in mind, and the Q4 is built on Volkswagen’s affordability-oriented MEB platform, GM has said that its first EVs will have premium prices.

With the GMC Hummer EV up next for a debut, but arriving on the market long before the Lyriq in fall 2021, it will be up to GM’s macho electric truck to start playing the catchy tune but up to Cadillac to write the lyrics.