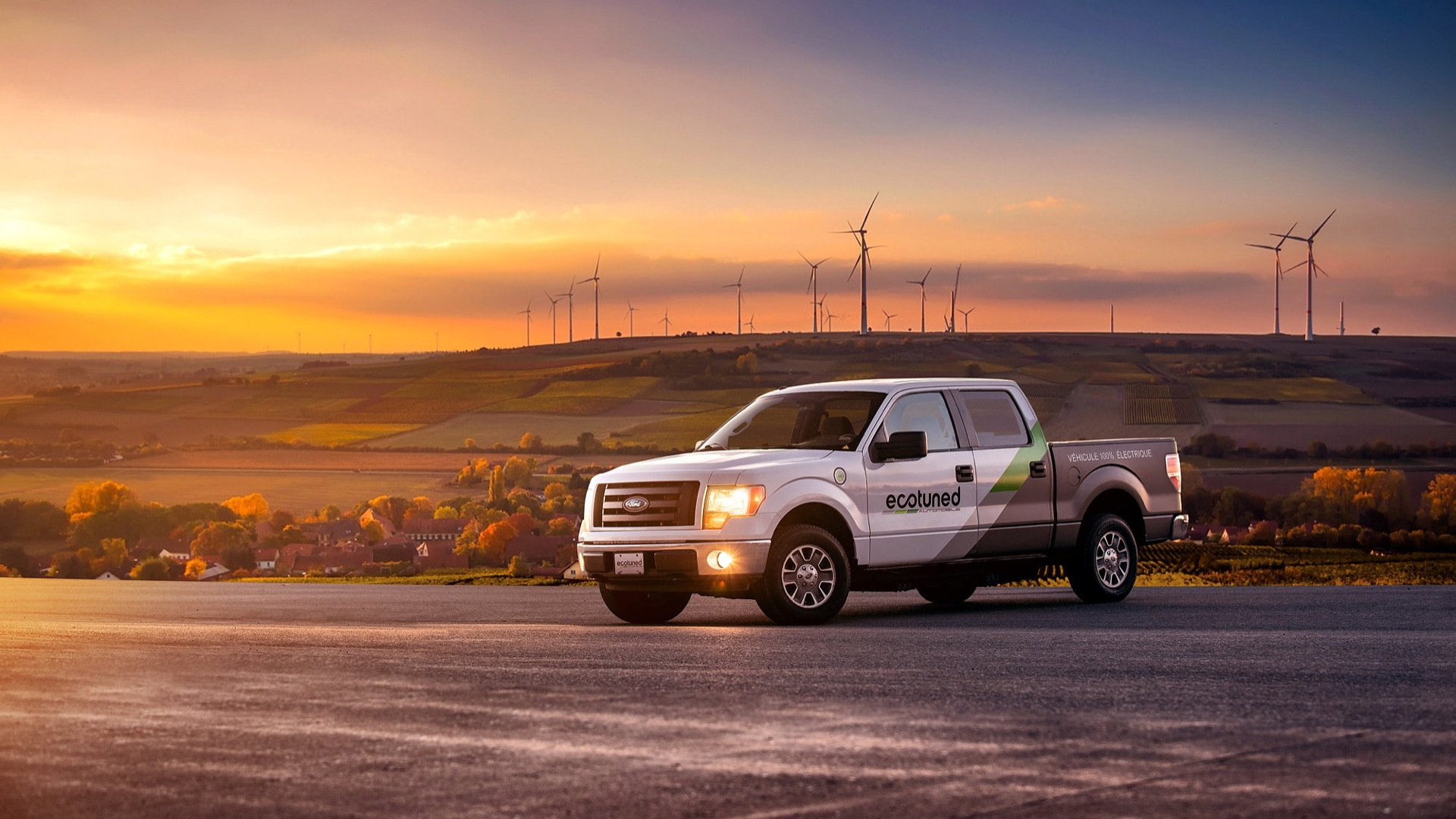 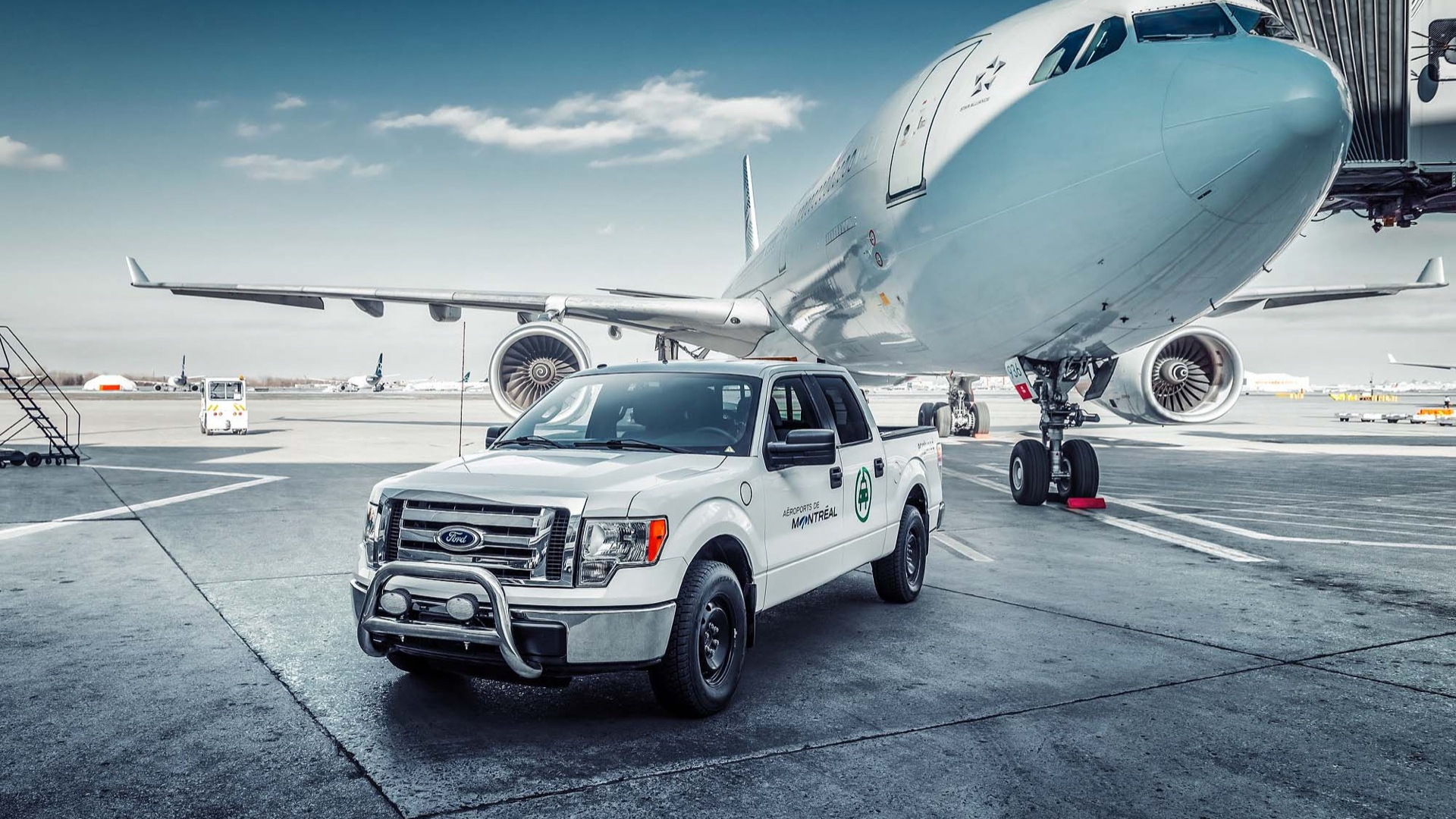 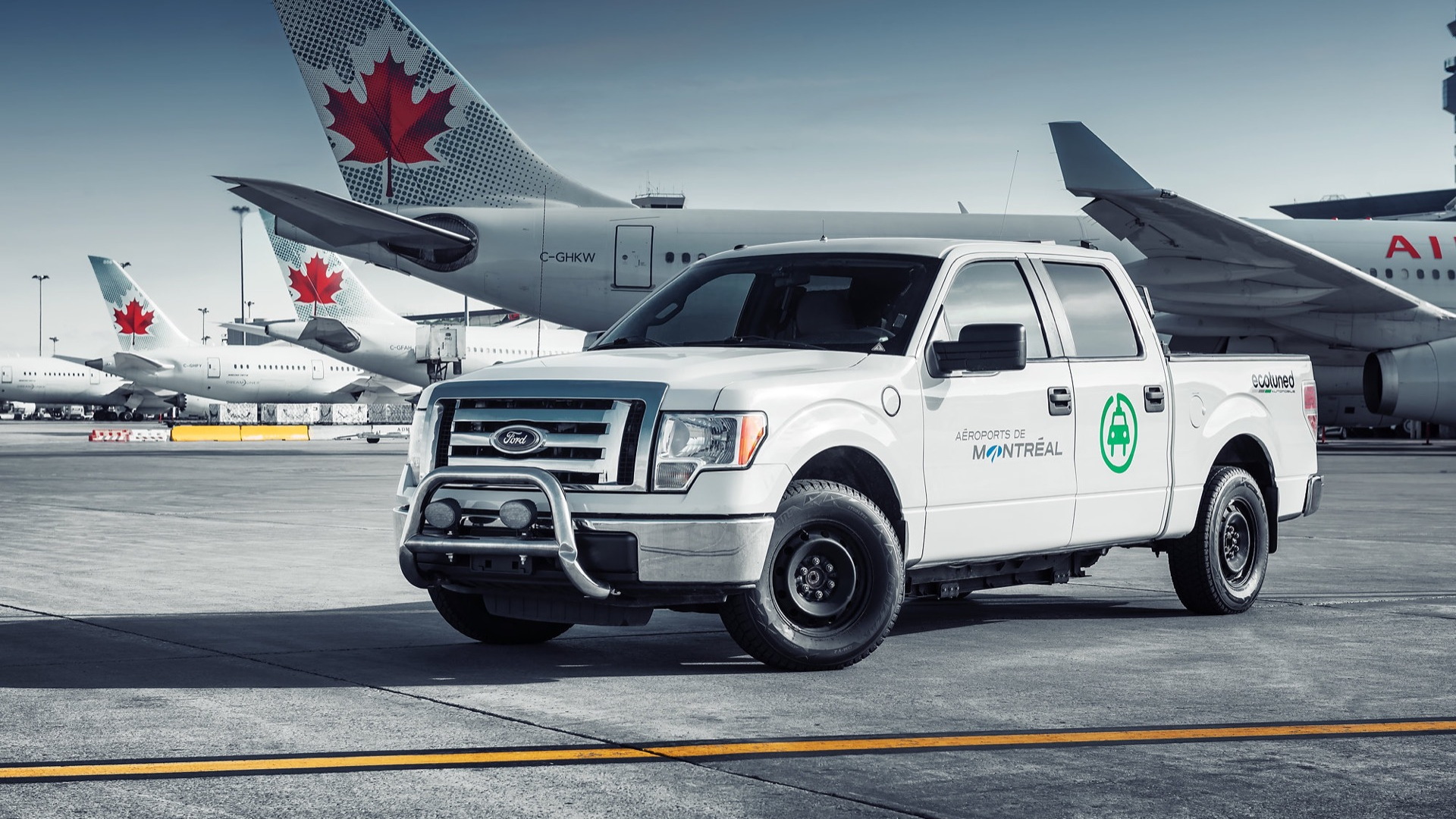 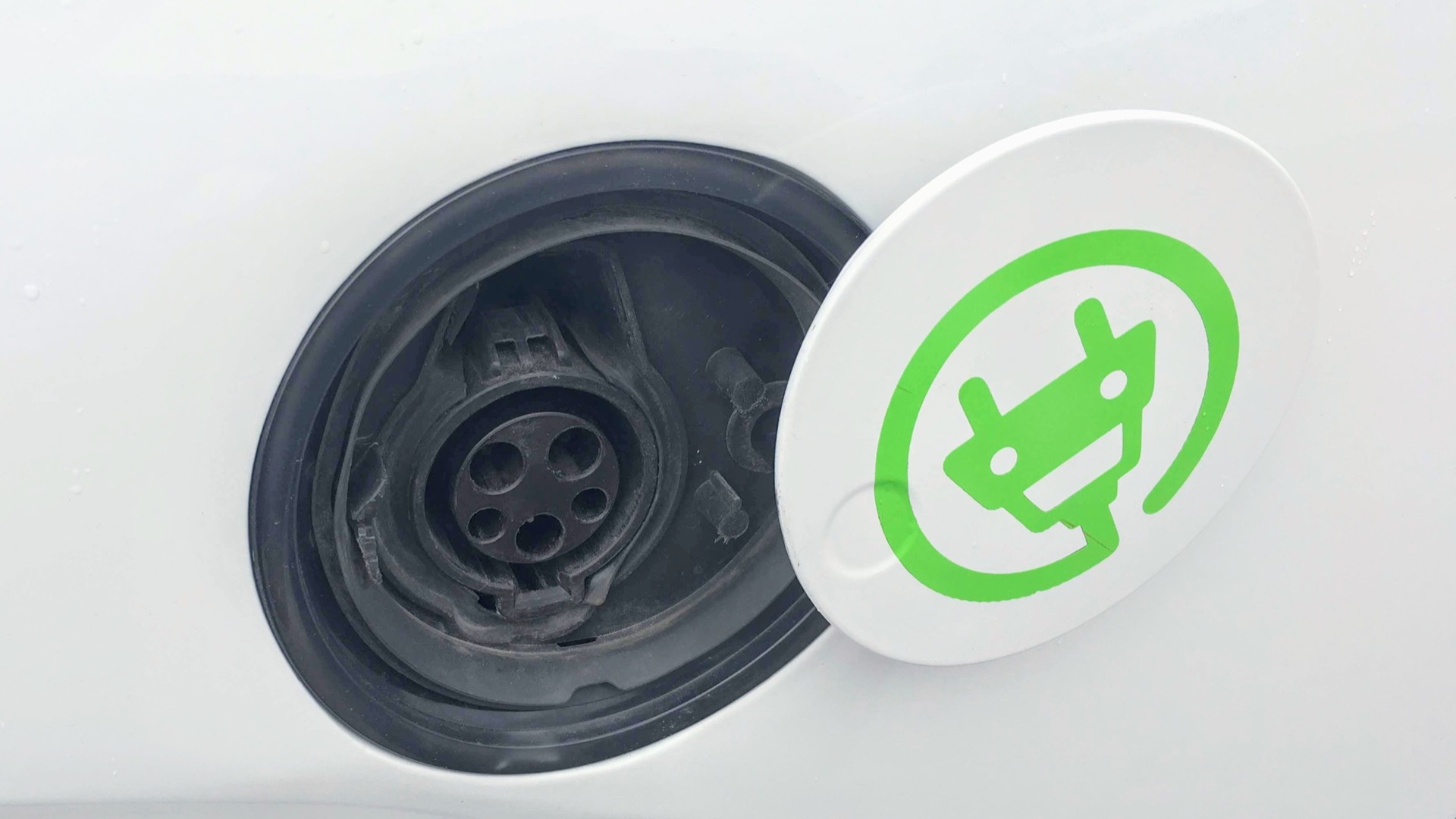 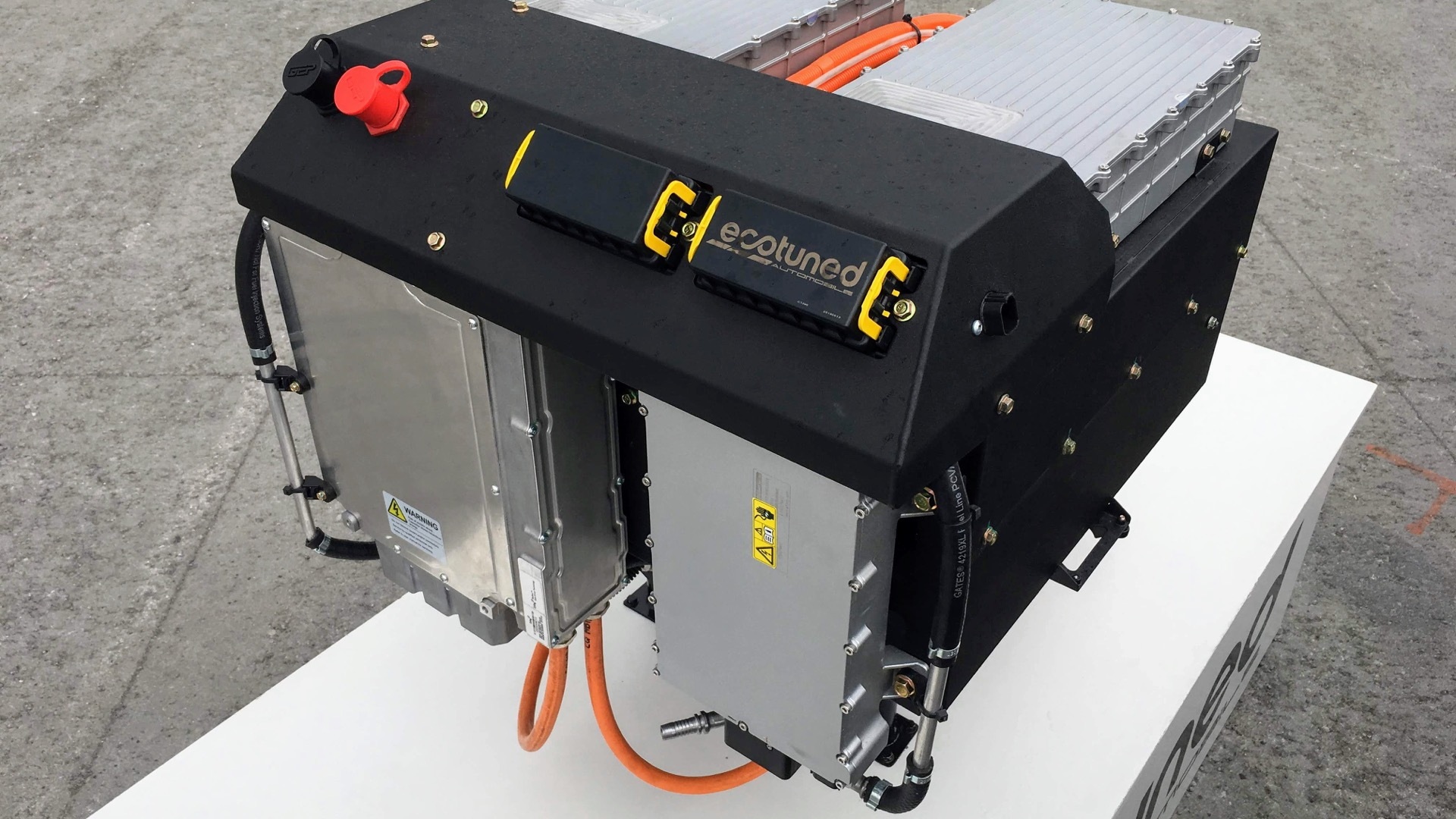 The all-electric Ford F-150 teased for the first time last week is something to get excited about—especially as an electric version of the top-selling vehicle in America.

The model isn’t likely to show up at dealerships for at least another couple years, though. And there are electric F-150 pickups already in use today. About a dozen of them ply the streets and highways around Montreal, Quebec, and are the product of Montreal’s Ecotuned, a shop that “aims to be a leader in the field of electric vehicle conversion in North America.”

Ecotuned has made about 15 electric truck conversions that are currently in service, and it's working on “several” more builds at present. Clients include the Montreal-Trudeau International Airport, the utility Hydro Quebec, and the grocery chain IGA.

Green Car Reports caught up with Ecotuned last month, at a technology exhibit ancillary to an annual Michelin mobility conference, where that company revealed a potentially production-bound airless-tire technology. And right off the bat, marketing and branding spokesperson Pierre Gladu took some of the air out of my first questions. He was quick to underscore that Ecotuned has no aspiration to become an automaker, a high-volume builder of conversions, or a builder of batteries or power systems themselves.

Its role, Gladu says, is focused in the “matchmaking” that the company does—of selecting off-the-shelf components from a number of different sources, and assuring that they will work well together as a prolific kit that will turn a tired truck into one with no tailpipe emissions.

“We’re not a car manufacturer,” said Gladu. “We’re recycling those cars that would otherwise go to the scrapyard, or the secondary market with polluting engines.”

Up until now, the company has focused on putting together the essentials to create a flexible combination of components that works well for the F-150, Super-Duty F-Series trucks, or Ford’s E-Series vans and anything built on them. Although Gladu says that other solutions are on the way, and that the company can work with GM, Ram, and “anything that’s on an H-frame.”

In what’s shaped up to be a two-day process for two mechanics—a total of 32 labor-hours—Ecotuned takes a regular F-150 that’s near or past the expiration of its original powertrain warranty and takes out the original engine, transmission, fuel system and exhaust. It then installs the motor and two-speed transmission and the power electronics. And then the battery pack goes underneath the car. Finally, they turn the fuel meter into the battery level meter—a nice wink to the truck’s new purpose.

The battery pack can range from 43 kilowatt-hours up to 86 kwh, depending on the space. In many installations, such as the F-150 it was showing last month, Ecotuned tucks some of the cells under the hood. They’re all cooled on the same circuit as the power electronics and the cells under the floor, utilizing the original radiator placement.

In its 48-kwh form as displayed, in a 2014 Ford F-150, the company listed 87 miles as the driving range, but Gladu says that it goes well beyond that in “ideal conditions” and that he’s gone more than 124 miles (200 km). The company said that the top 86-kwh version, with 14,500 pounds on board, can still go 99 miles. Level 2 onboard charging allows a six-hour recharge time for the cells, which arrive from a China-based supplier packed in modules.

Because of the use of a two-speed transmission by Bert, a maker of racing components, the Ecotuned converted trucks can now tow up to 18,000 pounds, according to Gladu. The truck will downshift to low up to 59 mph and uses a special PID controller to blip or brake the electric motor to or from approximately three times the rpm in just a quarter of a second.

Ecotuned uses off-the-shelf components, but what the company does, Pierre says, is offer a package that works efficiently together and offers a solution “that allows the fleet manager to have a turn-key solution, which they are all looking for.”

Eventually the plan would be to partner with a company like Midas or Mr. Muffler and offer a complete kit that can be assembled by those shops. In the meantime the company is aiming to fine-tune the “kit” that would enable this, as they target 1,000 conversions at the larger facility it moved to in March.

The total cost for its “turn-key” kit is about $23,000 to $30,000 (CDN$30,000 to $40,000), depending on the battery size, with some discounts for economies of scale. That doesn’t include the donor truck, but trucks that are in reasonably good condition routinely sell for less than $5,000 at auction and Gladu says that “they give it away if they have no more engine.”

It doesn’t require any changes to the stock suspension because the weight difference is negligible (just 4 percent more than a gasoline F-150 in the base build), which also lets Ecotuned carry over things like ABS or even the 4WD module.

If you’re getting your hopes up that there will eventually be some more polished version in the works for personal use, you’re better off waiting for Ford’s electric F-150. The goal here is going cheap and saving money over the long run, while cutting the carbon footprint of these workhorse vehicles.

More directly to the point for penny-pinching fleet managers, Ecotuned says that in fleets these vehicles will be able to cover a million kilometers (about 600,000 miles) with the conversion, with the same maintenance points as other F-150s—but without the oil changes, of course.