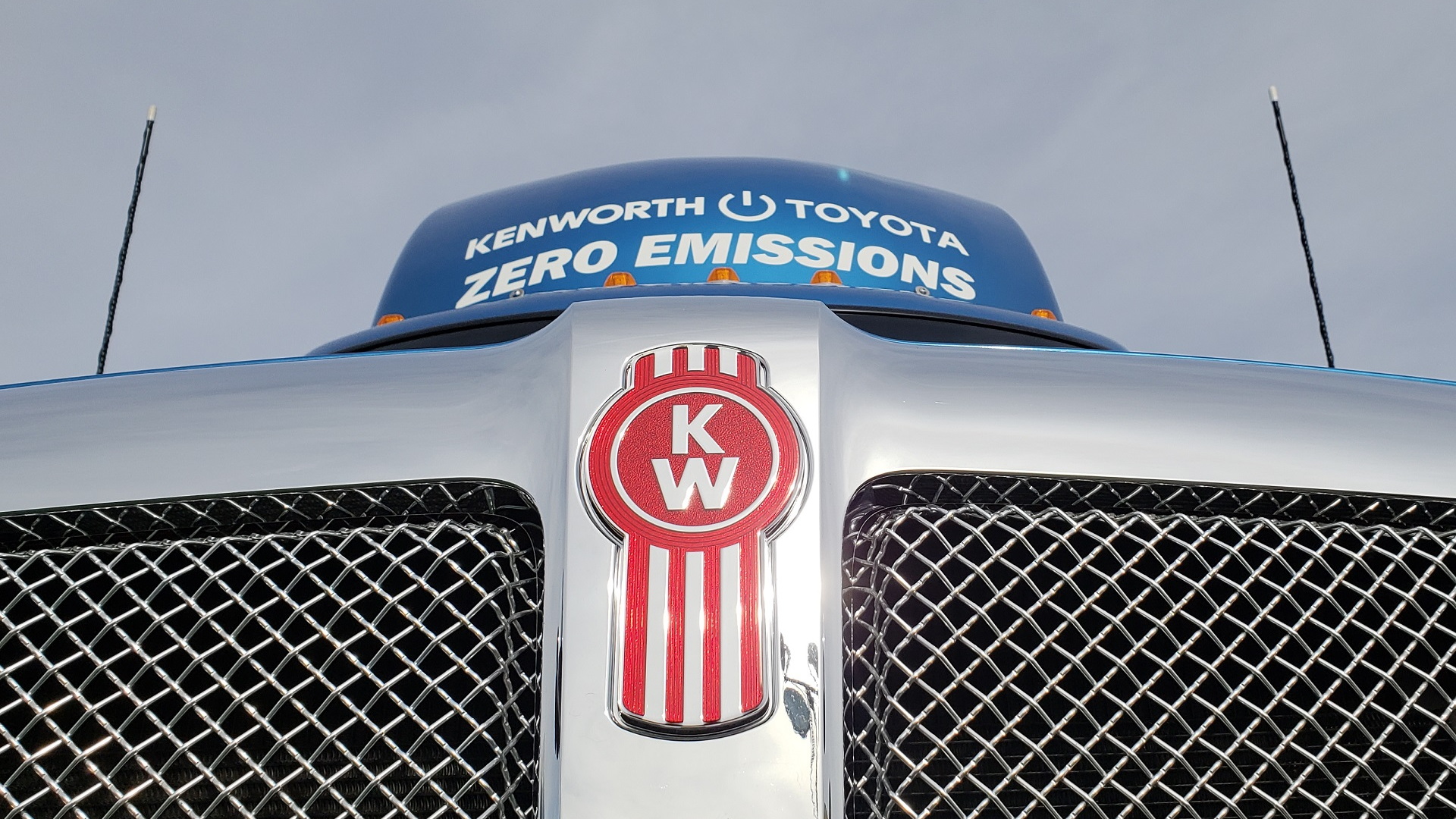 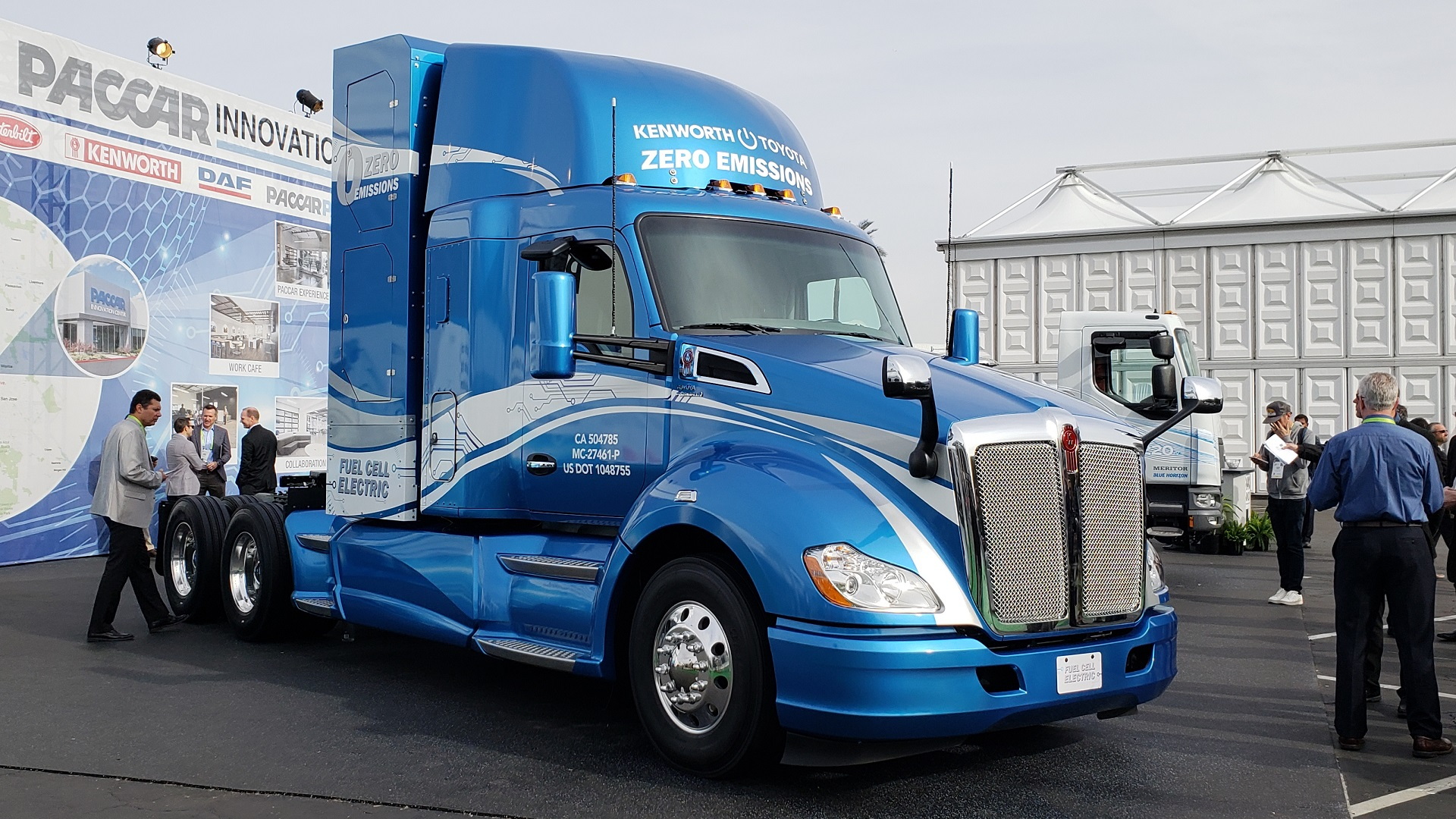 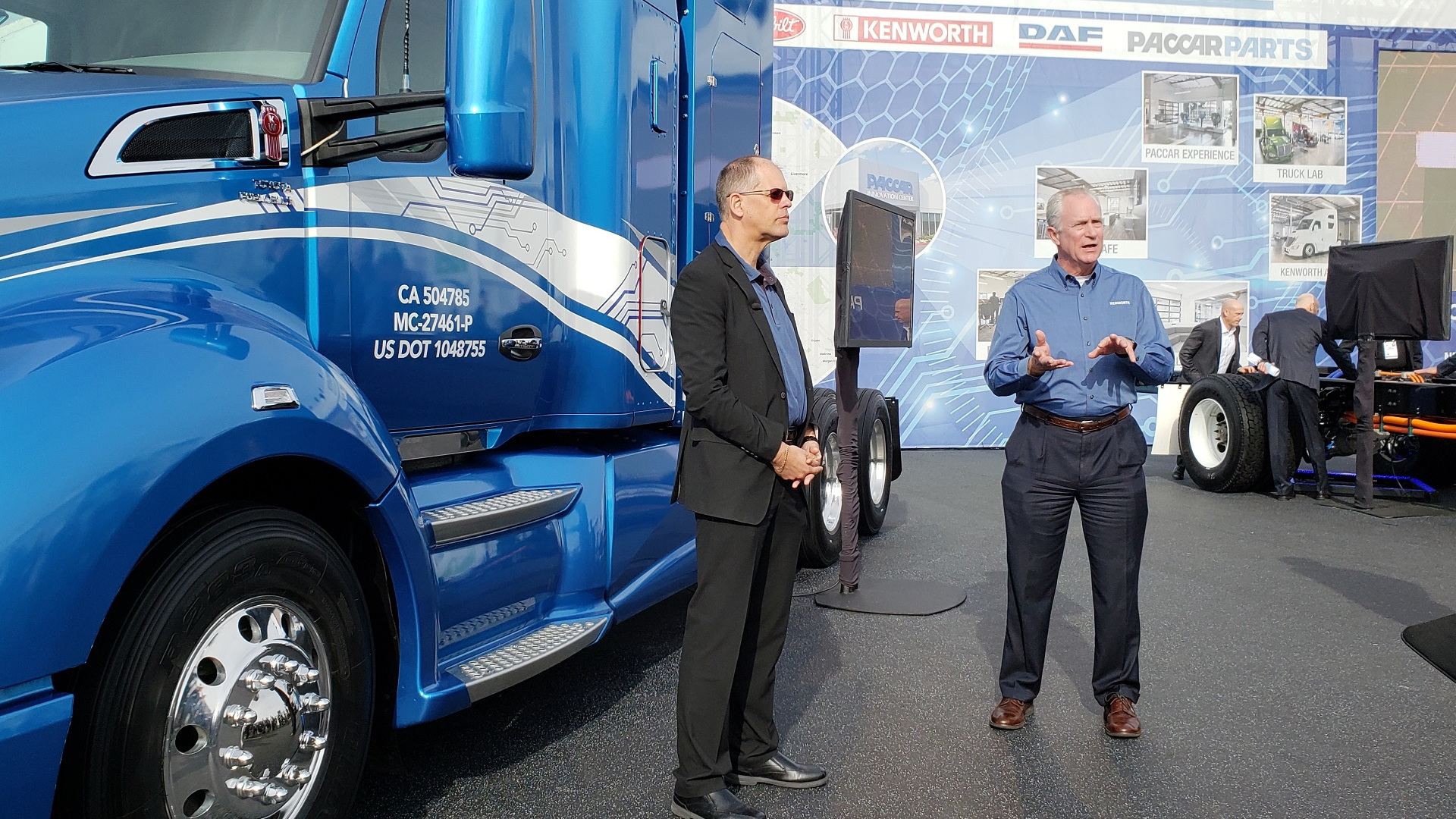 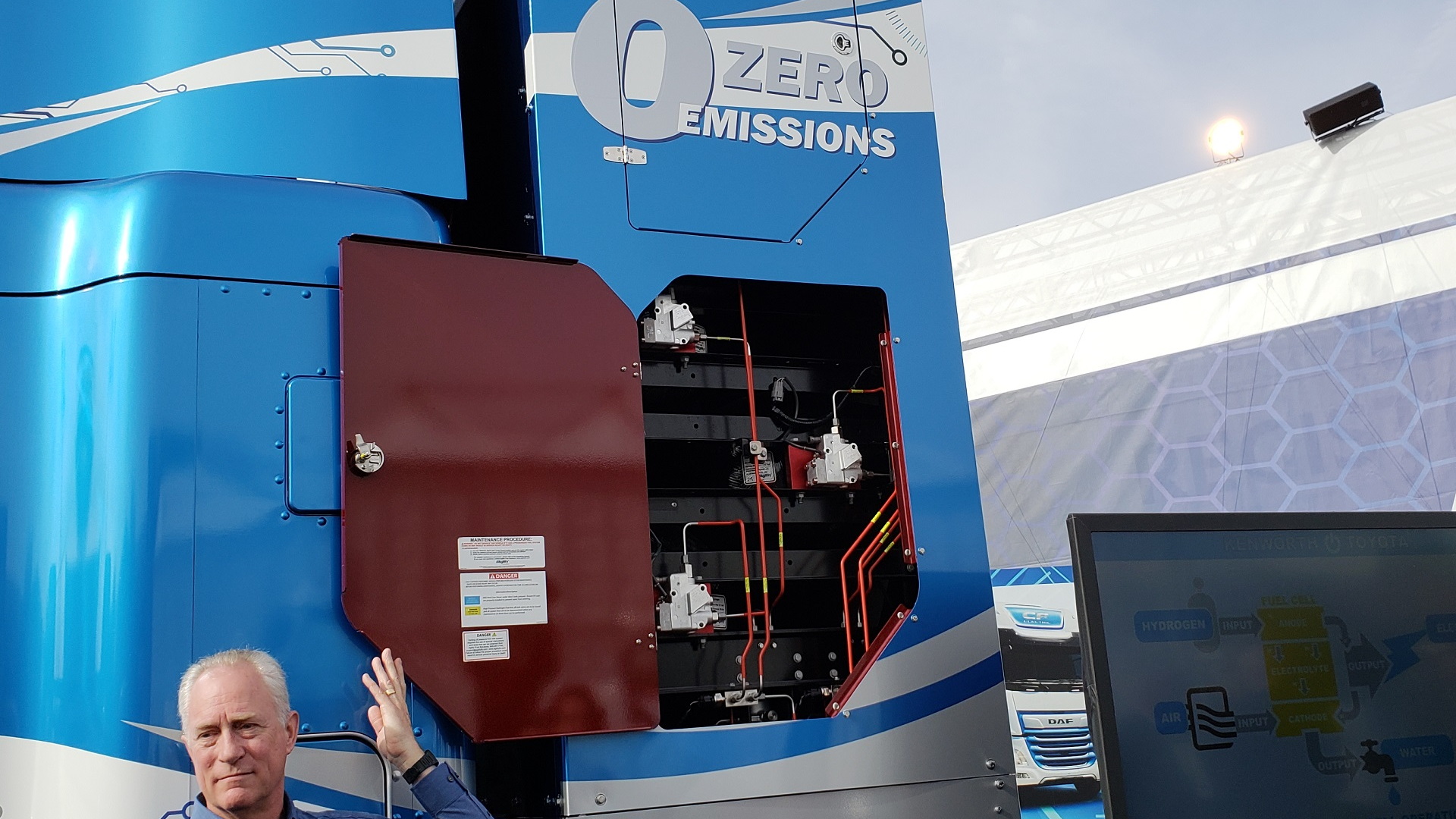 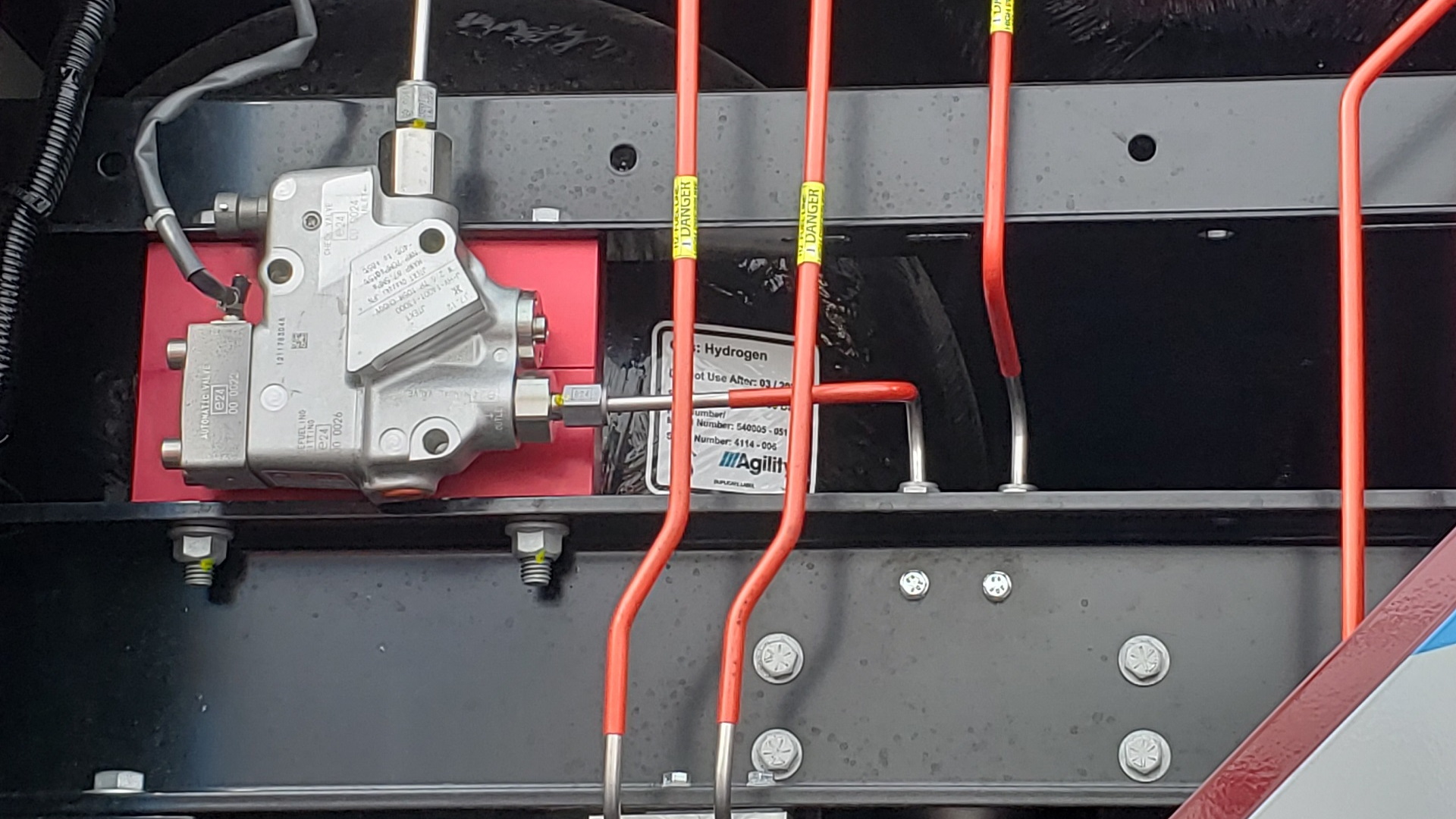 The word "drayage" isn't commonly used, even among green-car fans, but it's used by the shipping and logistics industries to refer to the transport of goods over short distances.

Drayage turns out to be the sweet spot for early efforts to put zero-emission heavy trucks on the road, including a joint project between Toyota and PACCAR's Kenworth brand, to put 10 hydrogen fuel-cell Class 8 semi tractors on the road.

We've known the pair were collaborating on a new iteration of its hydrogen-powered trucks since September, but a prototype displayed at this week's 2019 Consumer Electronics Show in Las Vegas offered more details. With the completion of these, Toyota will have been involved in fitting Mirai fuel cells into a total of 13 working trucks.

The 10 modified Kenworth T680 Class 8 heavy-duty semi tractors are part of a project funded by several California state agencies to reduce vehicle emissions at the Ports of Los Angeles and Long Beach.

Each day, 16,000 diesel-powered heavy trucks deliver and pick up containerized freight at the ports, often waiting hours at a time to transfer their loads. While drivers are required to keep their engines off when not actually in motion, the emission impact on the surrounding communities remains enormous.

Altogether, the state has dedicated $82 million to add zero-emission cargo handling equipment and bring the necessary fueling infrastructure into operation by 2020. The state's goal is zero-emission operation at the ports by 2035. 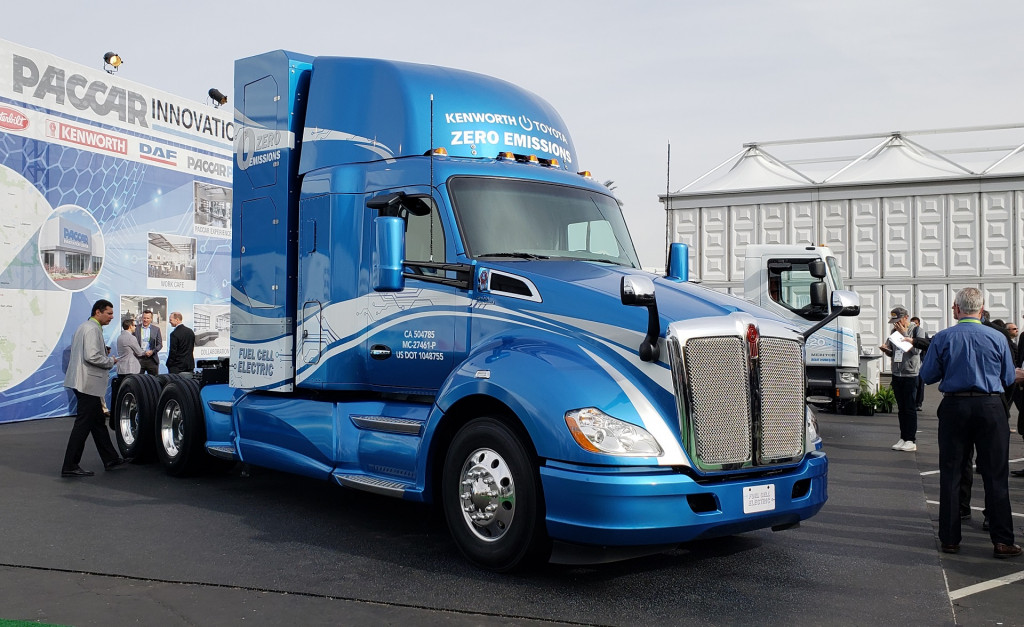 At CES on Tuesday, the hydrogen Kenworth was one of several zero-emission heavy trucks on display. Others included a prototype battery-electric Peterbilt tractor of equal size.

The short-haul "drayage" function actually covers journeys up to 60 miles in each direction—which represent a major percentage of all freight movement in the U.S.

That's the opportunity seen by the project's partners and funders. In this case, the 10 fuel-cell semis will haul freight among the ports and inland California cities like San Bernardino and Ontario.

With a range of 300 miles, they will likely need to be fueled only after a few sequential runs. The project includes construction of two commercial-scale hydrogen stations, in the California cities of Ontario and Wilmington, that can deliver up to 100 kg of compressed hydrogen at a time.

That's 20 times the 5 kg used in the Toyota Mirai fuel-cell sedan, and Craig Scott, Toyota's director of advanced technology vehicles, says the stations will be able to refuel 20 to 40 such trucks a day. Such high-flow stations will provide a far higher output than the three dozen or so hydrogen stations in California designed for fuel-cell passenger vehicles. 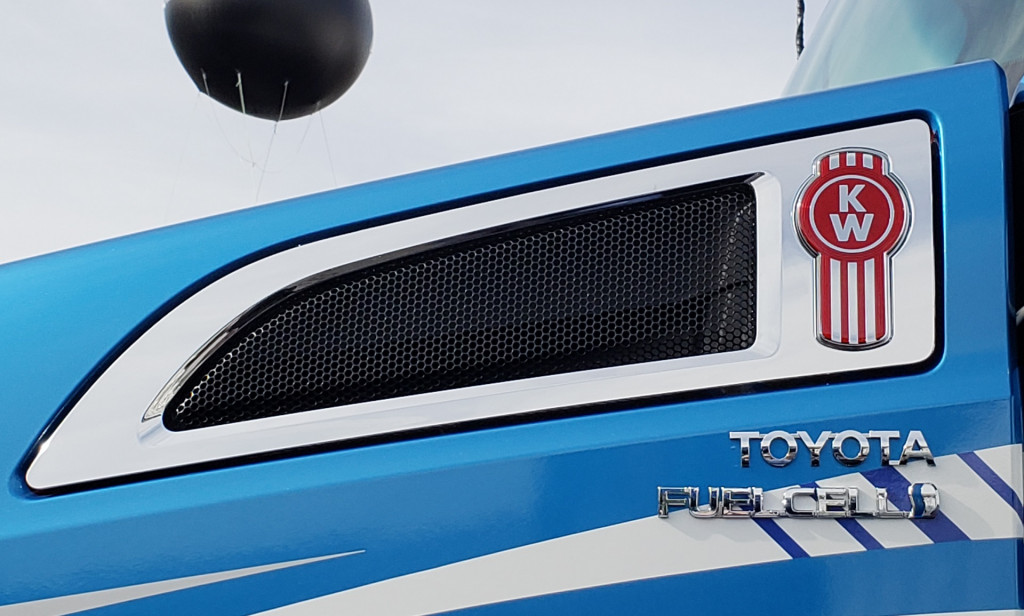 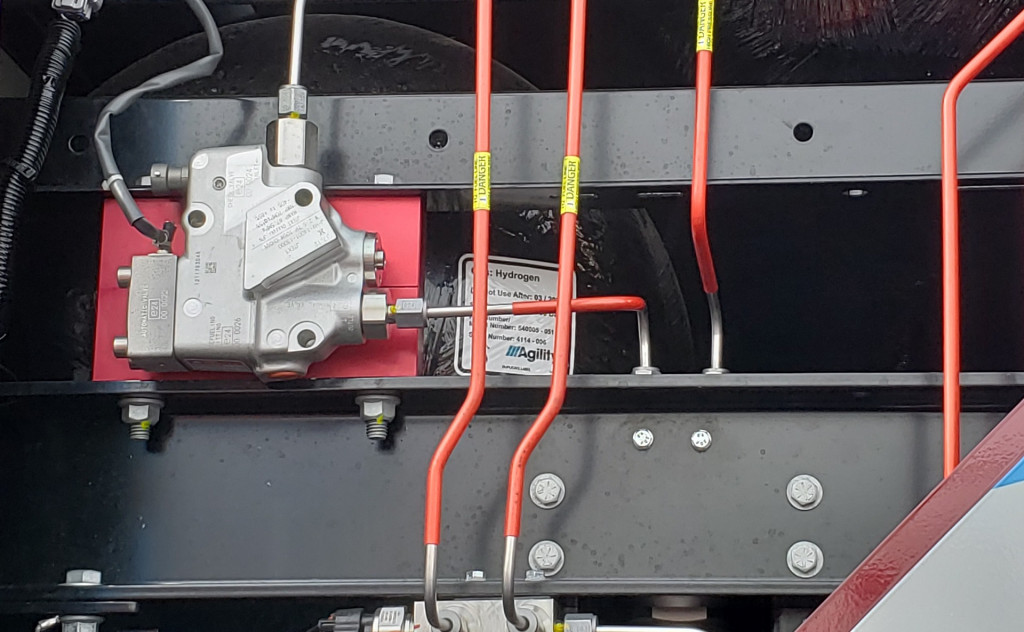 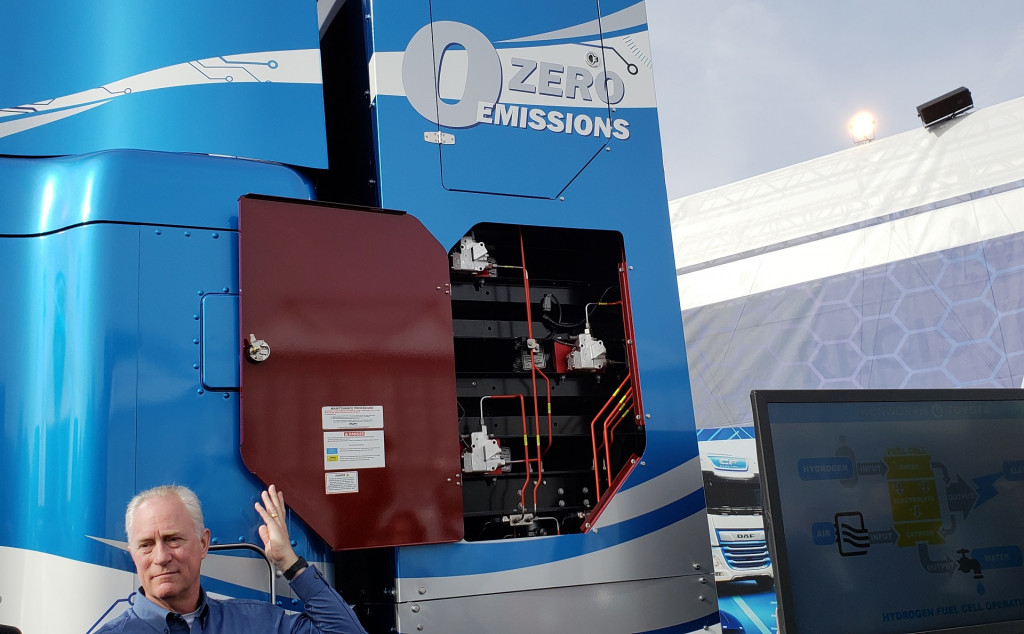 The trucks themselves will be powered by an electric motor mounted roughly amidships in the chassis, fed by a pair of 114-kilowatt (153-horsepower) Toyota Mirai fuel-cell stacks and a 12-kwh Toshiba lithium-ion battery pack to store energy for use when maximum power is required.

Together, those components can deliver maximum power of 500 kw (670 hp) to the drive motor, rated at up to 1,325 lb-ft of torque. Power is delivered to the axle through a four-speed automated manual transmission.

The prototype truck on display at CES used a total of six hydrogen tanks mounted vertically in a rack behind the cab, storing 60 kg of hydrogen compressed at 10,000 psi.

Other tank configurations might be considered for later vehicles, said Brian Lindgren, the director of R&D for Kenworth, located in Renton, Washington.

Lindgren also noted the 10 test trucks to be built this year and next would use shorter "day cabs" without a sleeper area behind the seats, which isn't necessary for drayage duties in which drivers go home each night. 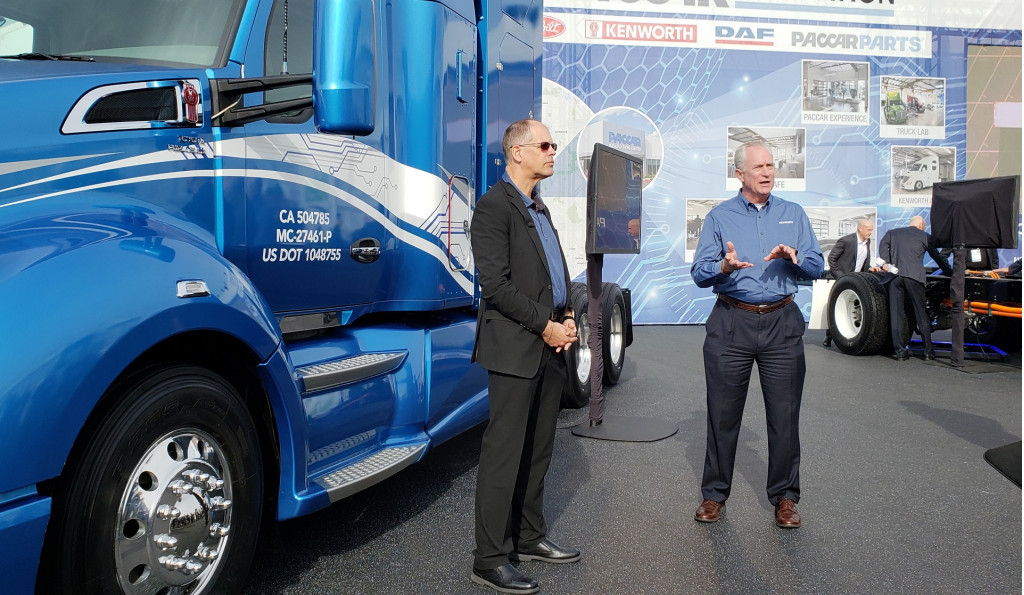 With the elimination of a large, heavy diesel engine from in front of the driver, he acknowledged, Kenworth might be able to design future semi tractors with shorter noses and potentially better aerodynamics.

Such trucks might conceivably resemble an earlier design study, known as the Kenworth Aero X, Lindgren suggested, though the 10 prototypes will package the components of their zero-emission powertrains in standard T680 shapes.

And, he underscored, Kenworth doesn't see hydrogen fuel-cell powertrains as the sole alternative for zero-emission trucking of the future. Battery-electric power will likely also play a role, he said.

Toyota provided some travel and accommodation to enable Internet Brands Automotive to cover its various announcements at the Consumer Electronics Show.