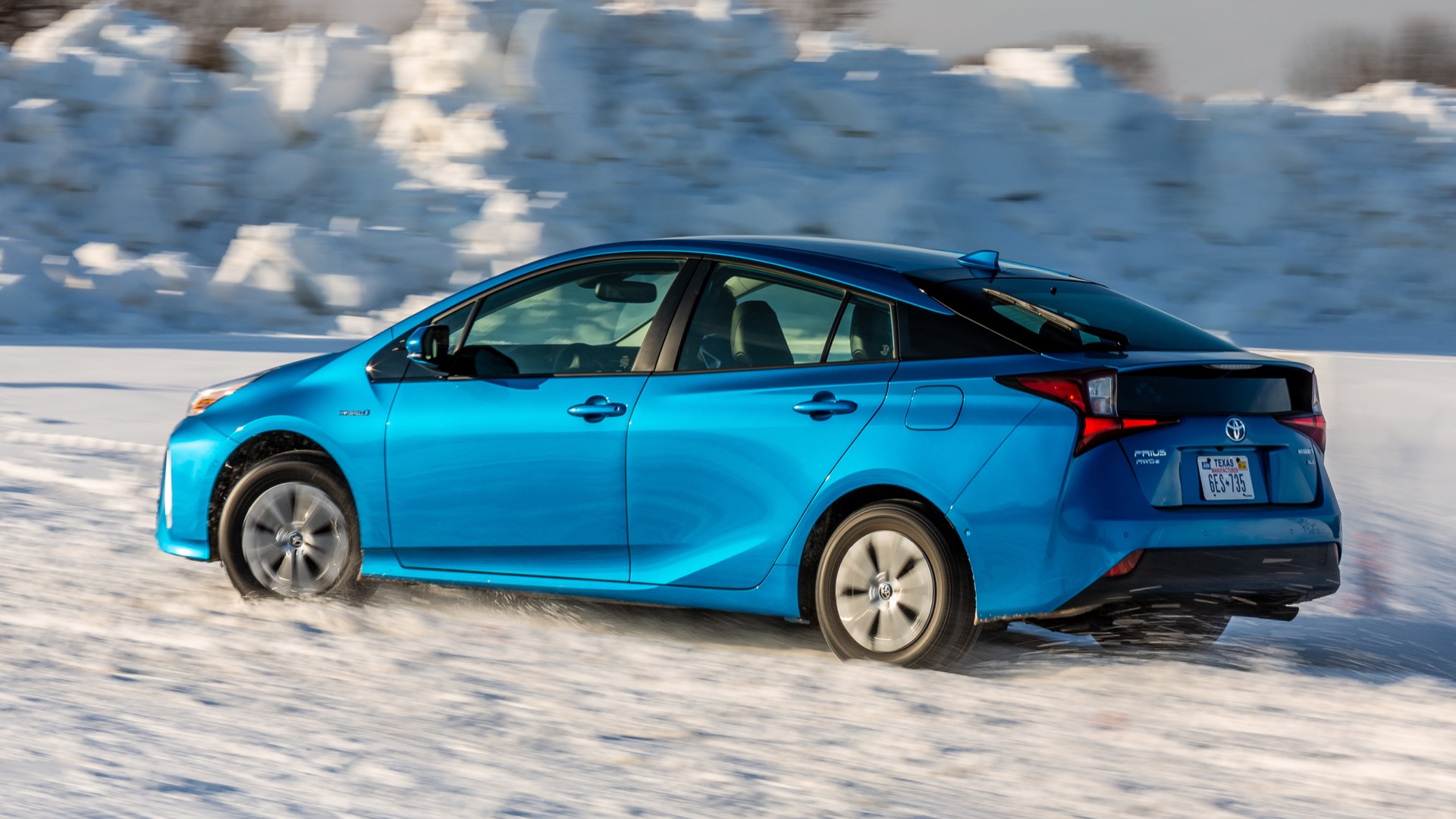 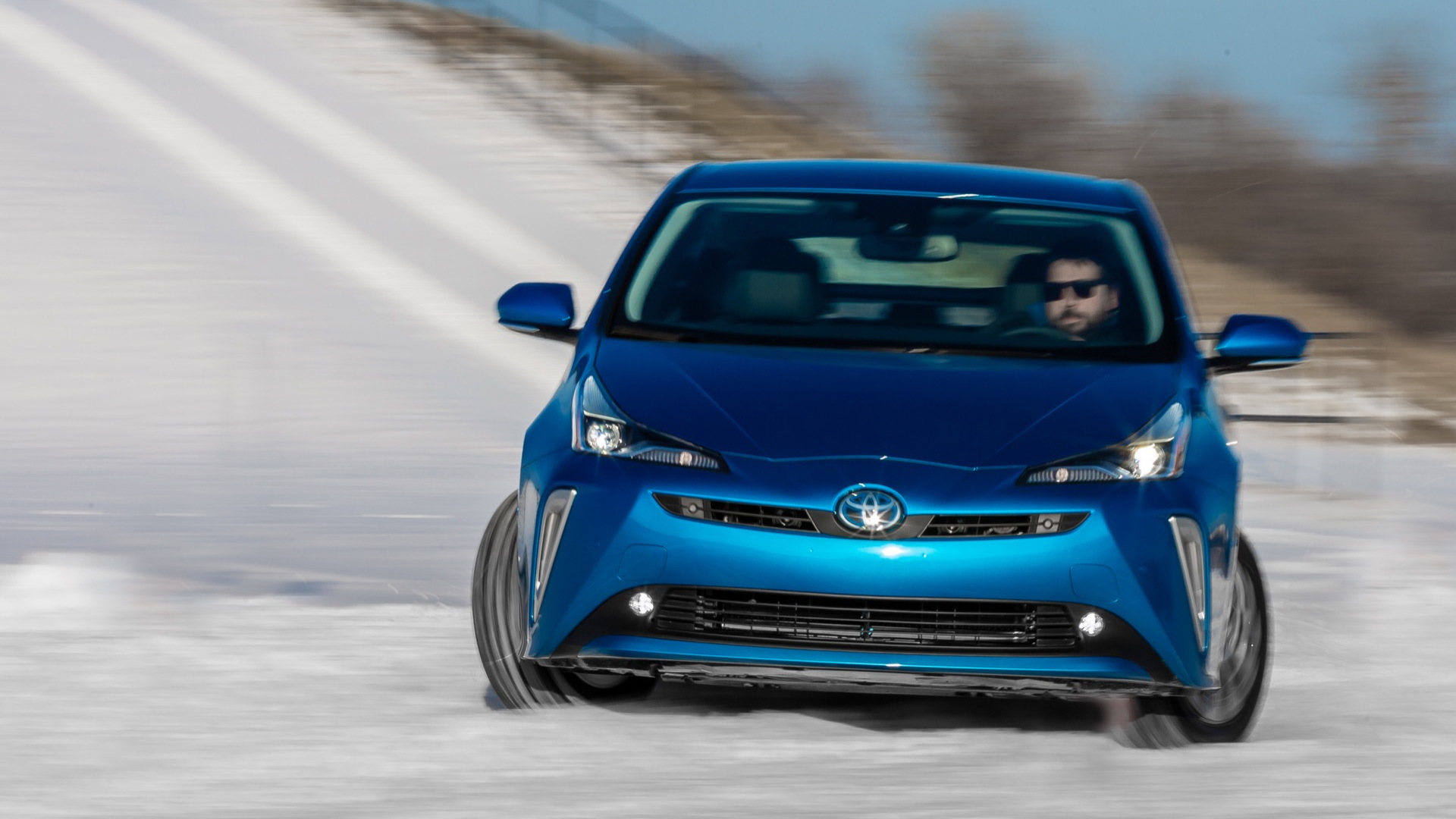 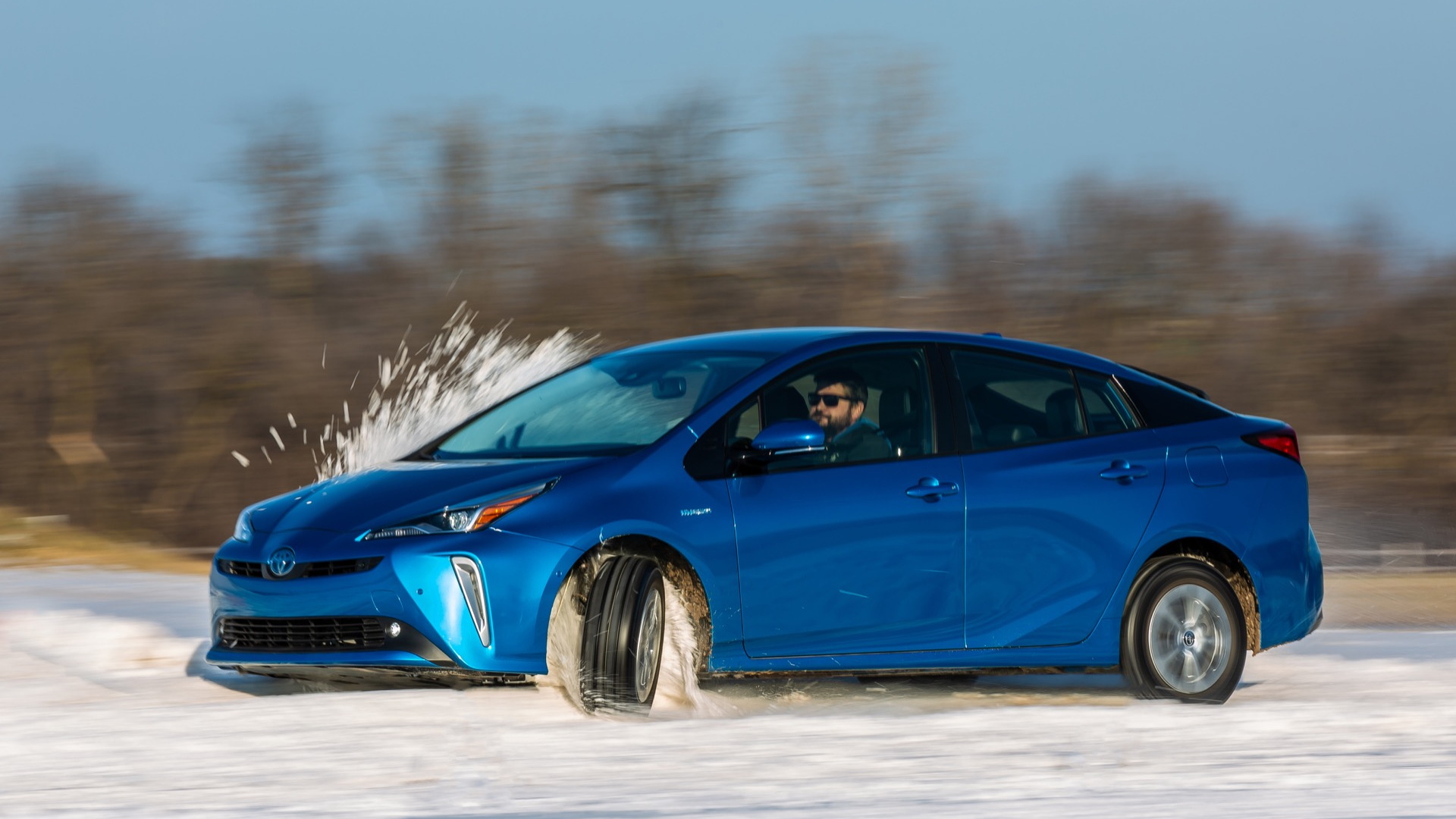 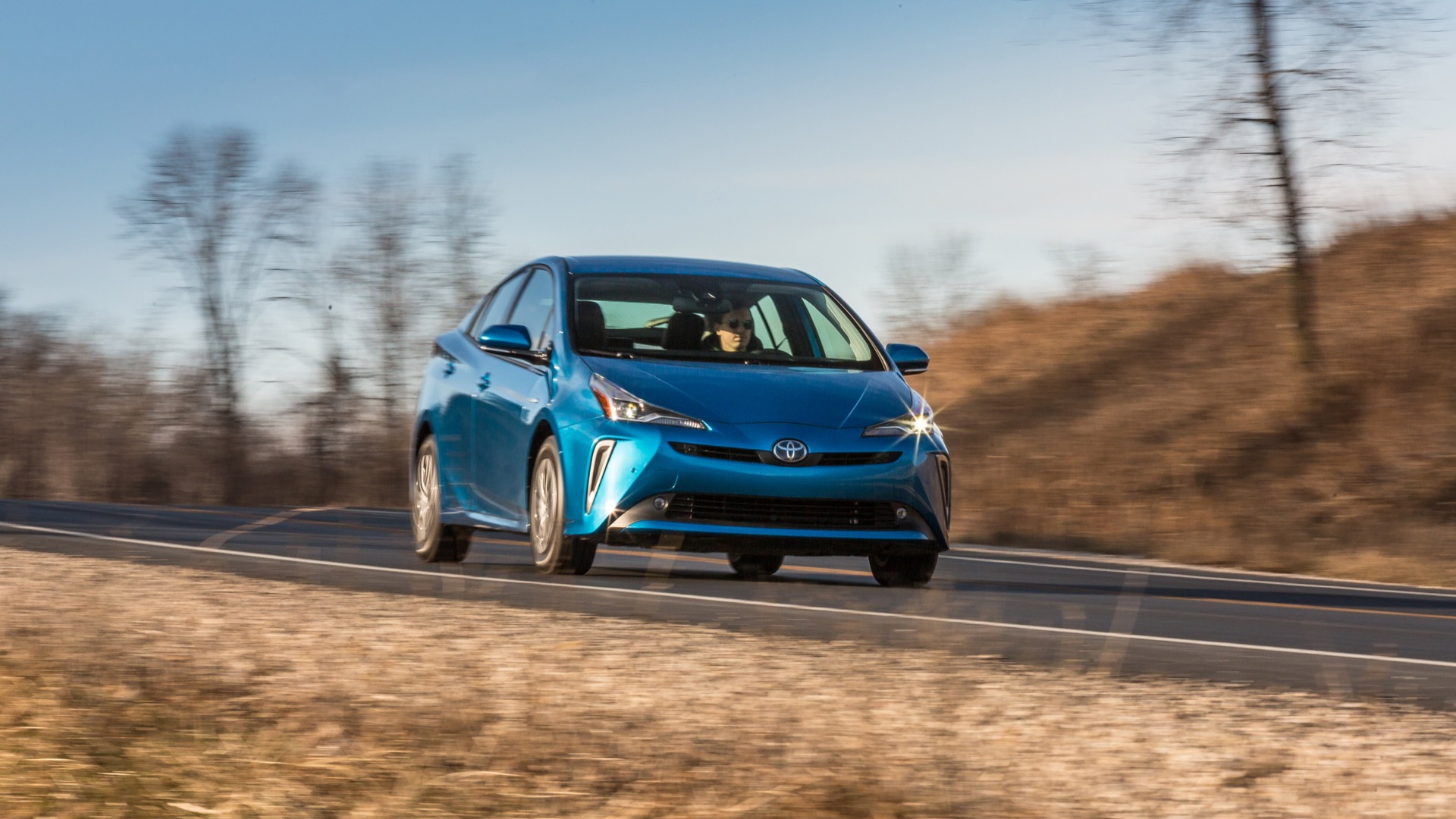 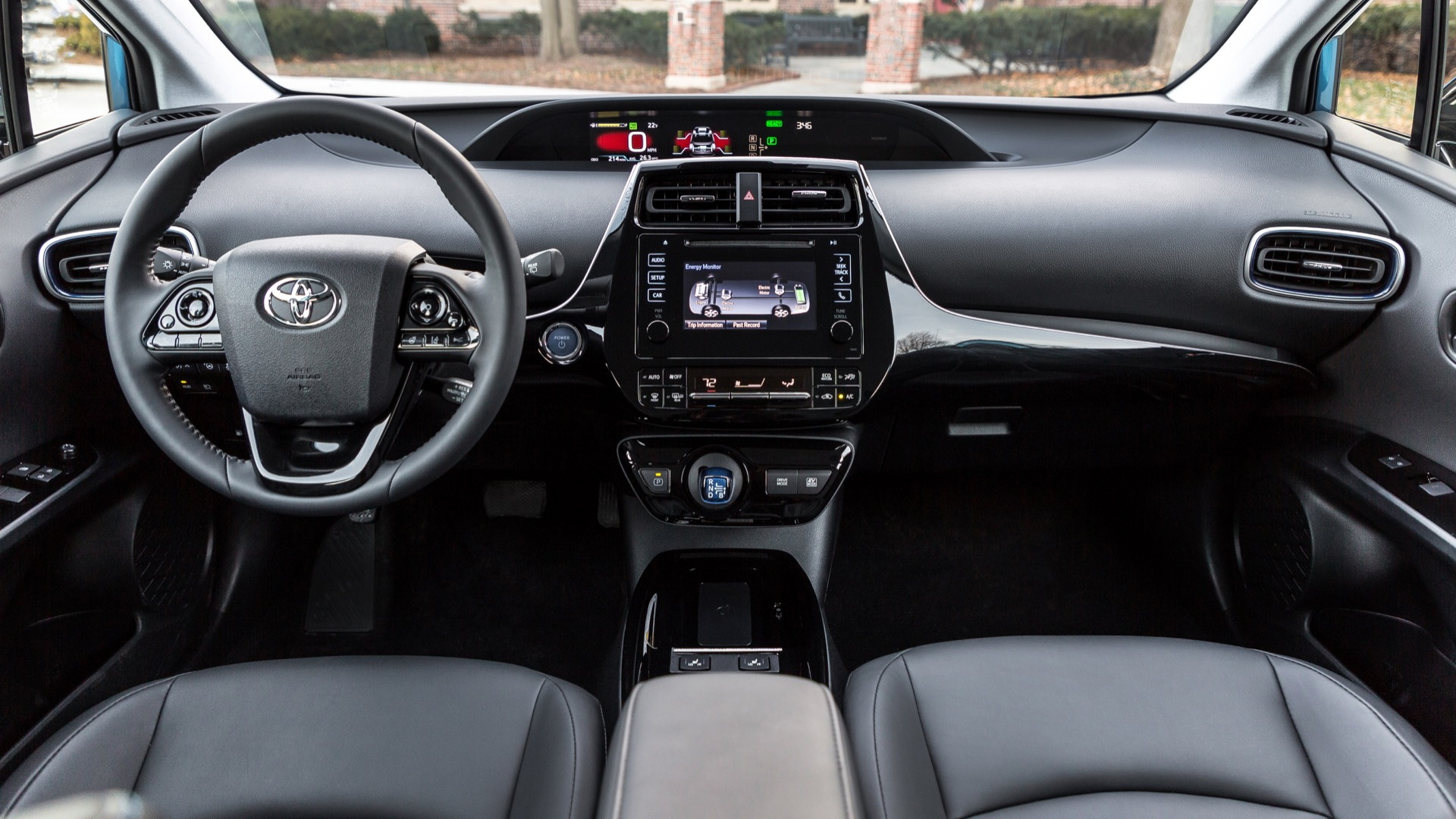 Between the unexpectedly wild styling, the very wide model range, the Prius Prime plug-in, and now the all-wheel-drive 2019 Prius AWD-e, it seems that Toyota has opted for a mix-and-match philosophy for the current fourth generation of America’s favorite fuel-sipper.

The big news for 2019—and perhaps the biggest hope of all these tactics for slowing the Prius’ prolonged sales slide—is the addition of an all-wheel drive system, a feature that customers in cold-weather markets had sought. And it’s a feature we recently were able to test on snowy roads in Wisconsin.

Conceptually similar to the hybrid system used in the RAV4 Hybrid, the Prius AWD-e employs an electric motor to drive the rear wheels completely independent of the existing hybrid system powering the front wheels.

The motor is small, both in physical size and in its 7-horsepower output. This lets it sit beneath the rear cargo floor without intruding into the cabin space. The Prius’ hybrid-electric powertrain in front, making 121 horsepower and 105 lb-ft of torque, with a 1.8-liter inline-4, planetary-gear system, and two motor/generators, carries over intact.

Electric power for the all-wheel drive Prius comes from the kind of nickel-metal hydride battery pack employed by the base-level Prius Two in the car’s previous numerical trim lineup. This was selected for the nickel-metal hydride battery’s greater tolerance for cold temperatures than the lithium-ion chemistry used in the front-drive Prius models, according to deputy chief engineer Shoichi Kaneko.

The rear motor is a wound design rather than the permanent-magnet type used in the Prius’s electric motor-generators paired with the gasoline engine driving the front wheels. It doesn’t help provide regenerative braking, but it contributes no drag when it isn’t in use.

Which is actually a lot of the time. The rear motor’s main function is to assist with low-traction launches, especially when the car is facing uphill and the weight is shifted off the front wheels. It helps continuously at speeds up to 6 mph, then contributes as needed at speeds up to 43 mph (70 kph). Its design is optimized to function in this speed range, when all-wheel traction is viewed as most important, so it turns off at 43 mph.

The system adds 145 pounds of weight to LE models and 170 lbs. to XLE, due to unspecified differences between the cars. This extra weight, the limited operational range and paltry 7 horsepower from the rear motor mean that the AWD car is “the same or slower” than the regular front-drive Prius in 0-60 mph acceleration, according to Kaneko.

No difference, until the snow falls

On the road, the Prius AWD-e is indistinguishable from a regular Prius. On dry pavement on a cold day, the AWD does not chirp its front tires from the abrupt application of electric torque on takeoff from a stop, circumstances when the front-wheel-drive (FWD) car sometimes does, so that is a potential difference.

Driving on a snowy road at approximately 25 mph, the AWD-e feels more stable than the FWD car and did not activate its stability control countermeasures to straighten the car while slaloming through a cone course. The FWD one maintained control through the same course, but audibly employed its electronic stability systems to help do it.

READ MORE: For six months, one in five Prius sales has been a plug-in hybrid

On a 6-percent uphill slope, starting from a stop, the AWD-e chugged up with no drama, despite the poor snow grip provided by its low-rolling-resistance tires.

Toyota did not let us test the FWD car on the hill, telling us that their test drivers did that and found the car would climb the hill, but with significant drama and effort by the traction control system. Snow-appropriate tires in place of the fuel-saving tires don’t really help, according to the company. With the car’s weight shifted toward the rear, the snow tire-equipped FWD Prius tended to spin its front wheels and dig into the snow before clawing its way forward, they told us.

The underpinnings of the fourth-generation Prius remain far better than the versions preceding it, with far better ride, handling, and cabin quietness. Unfortunately, they’ve looked a bit too much like Adam West’s OG Batmobile had rear-ended Sonic the Hedgehog.

So for 2019, Toyota has redone the front bumper cover and headlights, added fog lights and refined the taillights. Seems like they probably don’t have any spare roll bars or rally lights lying around the factory. The Prius AWD-e does ride 0.2 inches higher, so it has more ground clearance than a regular Prius, but it is no lifted 4x4.

Still, the 2019 changes substantially soften the Transformers edges of the outgoing model, so if it still isn’t pretty, at least it doesn’t appear to be trying to poke your eye out with its sharp angles. There are two vibrant new colors, Supersonic Red and Electric Storm Blue, which help the new edition stand out a bit from the sea of existing silver and blue Priuses.

Toyota has replaced Prius model designations with the nomenclature used by the company’s other models, so for 2019 the original hybrid-electric comes in L eco, LE, XLE, and Limited trim packages. All-wheel drive will only be available in mid-range LE and XLE trim levels because those are the highest-volume versions, according to Toyota.

There are appearance changes inside too, where the stark gloss white of the console around the shifter leant a Star Wars stormtrooper aesthetic to the cabin that customers apparently didn’t love. While redesigning that part, Toyota relocated the seat heater switches to a convenient spot by the shifter, rather than hiding them under the dashboard, where they were in the 2018 car.

How it pencils out

Prospective Prius buyers in cold-weather states really want all-wheel drive to help get out of their driveways and out of their neighborhoods to the plowed highways, so the low-speed system addresses their needs while adding less than $2,000 to the car’s price and subtracting a predicted 2 mpg from its combined fuel economy rating, Toyota explained.

For today’s Prius, from an essentially off-the-shelf system, Toyota has produced a more versatile all-weather machine. It could comprise 60 percent of sales in places like the Northeast and will probably total about a quarter of sales nationwide, the company said.

The overall result is more successful than most such mix-and-match efforts. But when it comes time for Toyota to do a full restyling of the next-generation Prius, whatever form it ultimately takes, I can bring the firecrackers for the old one.

-----
Toyota provided some travel expenses so that Internet Brands Automotive to bring you this firsthand report.