Honda officially revealed the production version of its hydrogen fuel-cell sedan at the Tokyo Motor Show.

The company released two photos late last month that show the car and its interior--which it said at the show will be called the Honda Clarity Fuel Cell--after released FCEV and FCV Concepts over the past two years.

But revealing the fuel-cell car--which will compete with the 2016 Toyota Mirai now starting deliveries in Southern California--leaves some open questions.

Specifically, what about the new and dedicated battery-electric and plug-in hybrid vehicles that Honda promised to launch by 2018 as well?

The company made that commitment at the Detroit Auto Show this past January, while displaying its FCV Concept vehicle.

But during a special briefing called to make that promise, Honda officials frustrated journalists by saying exactly that--and not a word more.

Now, Autoblog Green raises an intriguing possibility: What if all three vehicles are, in fact, variants on the same car?

"We want to bring these vehicles [EV and PHEV] to market in significant volume." Ryan Harty told the site. He's Honda's manager of environmental business development.

And one way to do that would be to use an existing platform developed for another alternative powertrain that propels the car with an electric motor. That would be the FCV.

The idea remains speculative, as Autoblog Green notes, but it's an intriguing possibility and it makes a lot of sense.

Rather than spend the money to retrofit an existing vehicle--as it did to create the 1,150 examples of the now-discontinued Honda Fit EV compliance car--it would be far less expensive for Honda to start with a platform or architecture propelled by an electric motor.

The floorpan could be engineered to hold either several long, thin hydrogen tanks or a flat battery pack a la Tesla Model S.

In fact, the most challenging variant to engineer would be a plug-in hybrid version, which would require all the plumbing and impedimenta necessary for a gasoline engine, including a fuel tank.

The idea of offering an architecture that can accommodate battery-electric and plug-in hybrid versions is likely to become more common in coming years.

The future Hyundai dedicated hybrid, known as "AE" and meant to compete with the new Toyota Prius, will also have both plug-in hybrid and battery-electric variants.

No word on a hydrogen fuel-cell version as yet.

However, Ki-Sang Lee, a senior vice president who's head of Hyundai's R&D Center for "eco-friendly vehicles," told Green Car Reports in January that the AE platform could be adapted for that purpose--but that such a project would require more work than for its various hybrid and electric versions. 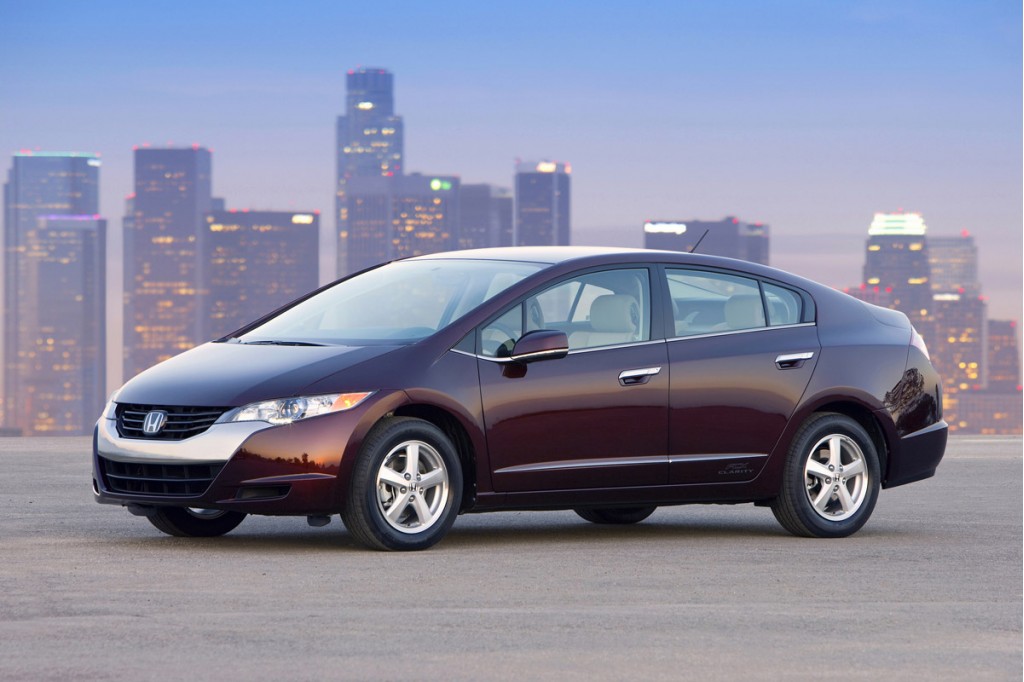 The Honda FCV succeeds the very low-volume FCX Clarity fuel-cell sedan, of which roughly 200 were reportedly made between 2008 and 2014, 50 of which were offered in the U.S.

The FCV will be the first hydrogen-powered vehicle to house the complete powertrain--fuel-cell stack, electric traction motor, and power electronics--under the hood.

That makes the cabin as roomy as that of a conventional sedan, Honda says, and lets it seat five adults. The Mirai, by contrast, has only four seats.