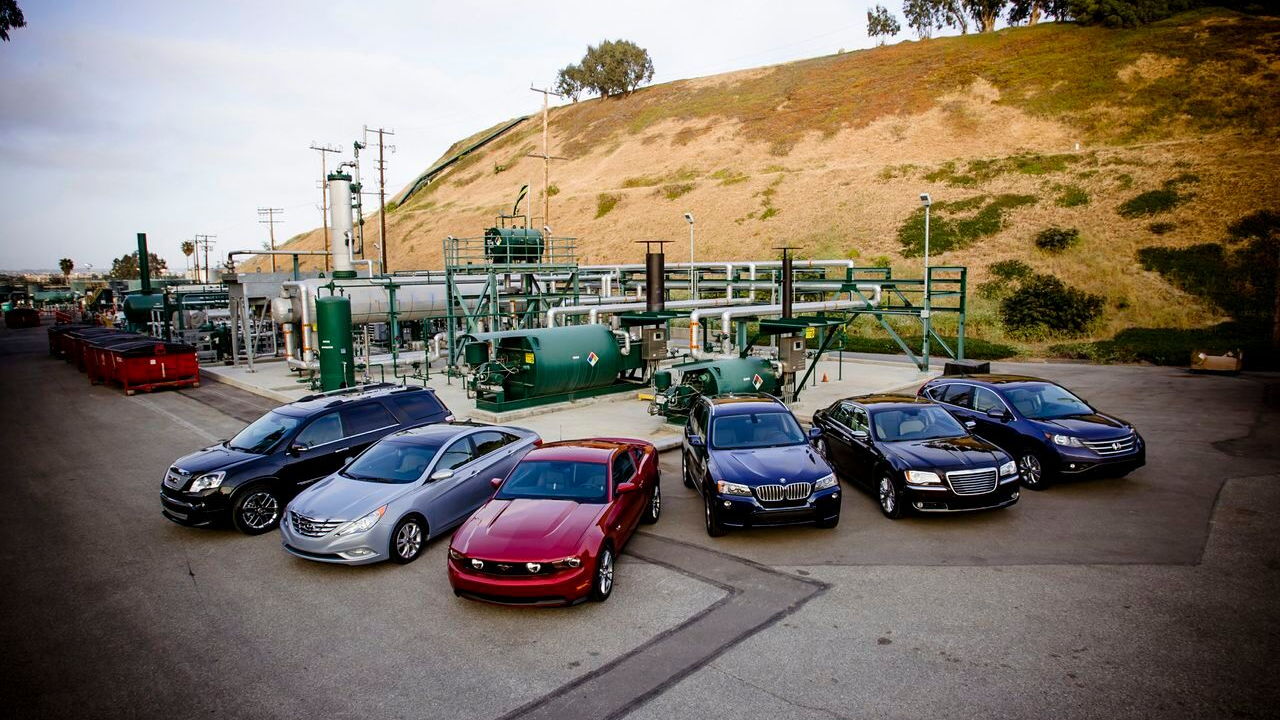 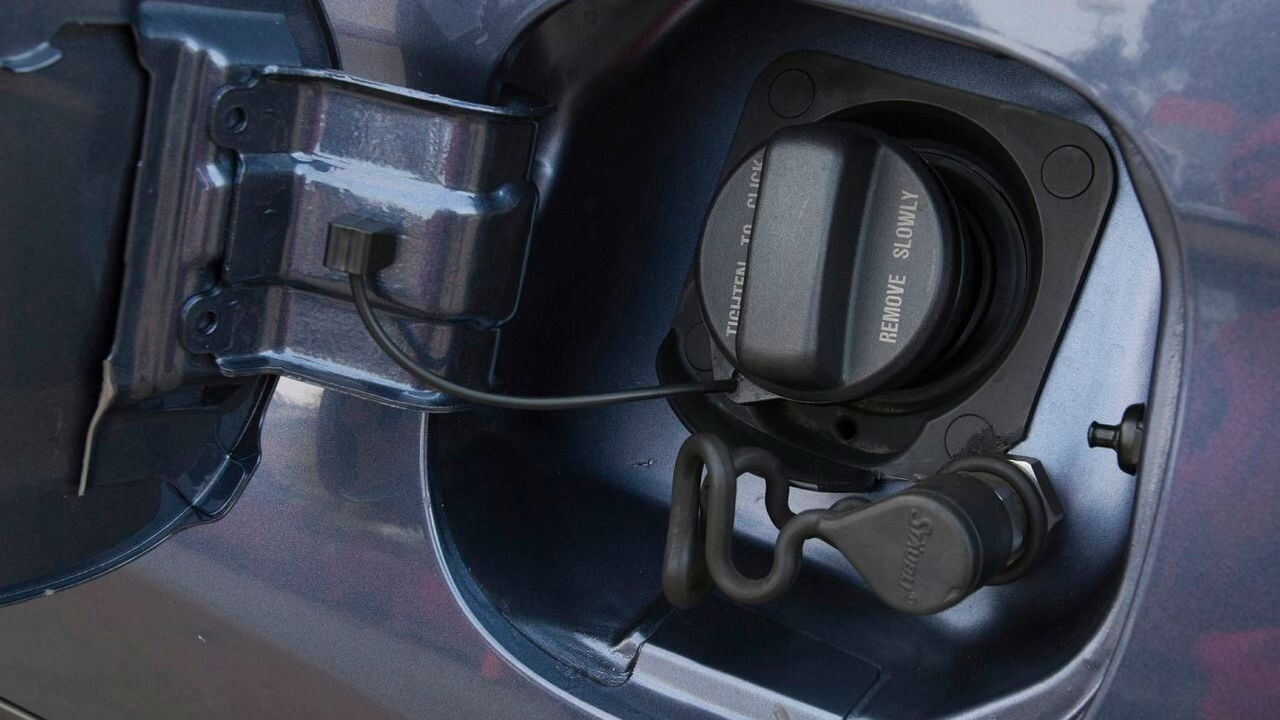 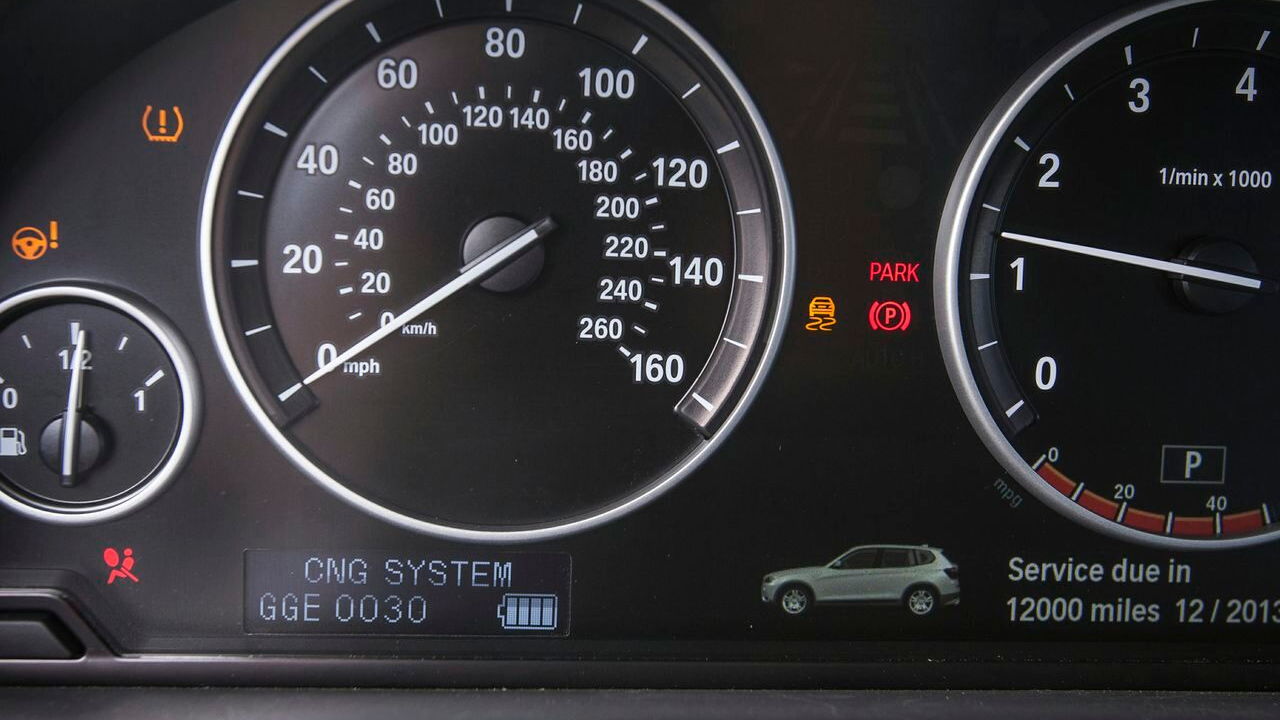 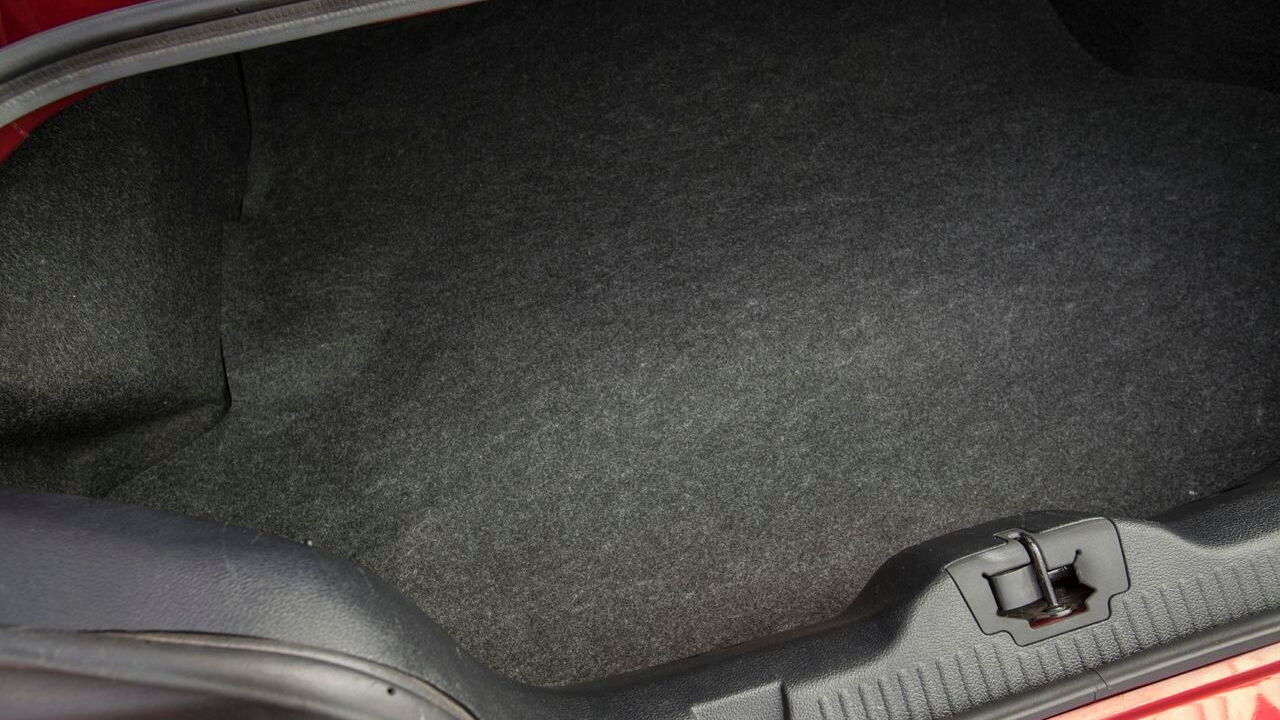 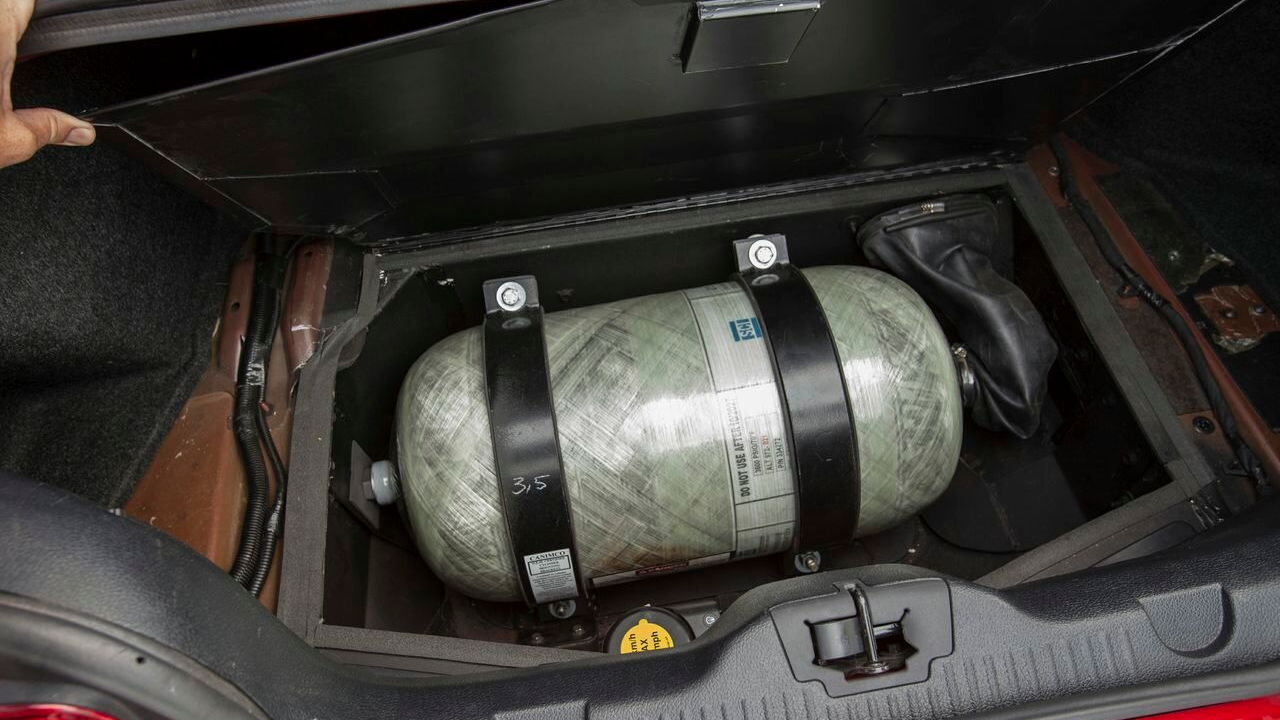 To date, natural-gas vehicles have come with significant compromises.

The high-pressure tanks that hold enough compressed natural gas to run 200 miles or more take up many cubic feet of space in the trunk, load bay, or pickup bed.

But what if you could design a vehicle that had just enough natural gas to run 50 to 75 miles--without any change to its cargo space?

The concept is identical to that of a Chevrolet Volt range-extended electric car: Run the vehicle's first miles on a cheaper energy source that can be provided at home, then switch to gasoline for those occasions where longer continuous range is needed.

In this case, though, the primary fuel is natural gas rather than electricity, and it powers the combustion engine--meaning no electric motors, battery packs, or electronics are needed.

These cars are best suited, Carlab said, to those regions where natural gas is plentiful, cheap, and already installed in a large numbers of homes for heating or hot water.

For home fueling, the vision is that a small compressor fills the natural-gas tank to its maximum pressure of 3600 psi overnight.

Major appliance makers, including some who attended the drive event, view such a compressor as an opportunity to launch a new category of home appliance sales.

No gasoline for weeks?

Almost four-fifths of U.S. vehicles travel 40 miles or less each day--as Chevy Volt advocates repeatedly note--so conceivably a driver could run for weeks by filling up on natural gas at home each night.

Visits to gas stations might stretch to weeks apart, a popular selling point.

But the biggest incentives are cost--natural gas costs less than $2 per gallon-equivalent in most markets--and the opportunity to drive using a domestically-produced fuel, rather than on gasoline refined from imported oil.

On one level, they're simply traditional bi-fuel conversions--but with much smaller CNG tanks, and no requirement that the driver select which fuel is used.

But on another level, they're the first vehicle aside from the low-volume Honda Civic Natural Gas to show how natural gas can be used for everyday passenger vehicles--and they're designed to avoid that car's drawbacks of limited range and minimal trunk space.

Their engines varied from a 2.4-liter four-cylinder in the Sonata to sixes in the BMW X3 and GMC Acadia and a 5.0-liter V-8 in the Mustang GT, to show that natural gas could be used in vehicles with a variety of engines and power ratings.

All were engineered to start up and run on their CNG supplies, giving them rated ranges of 55 to 77 miles on natural gas.

When the natural gas supply was exhausted, each vehicle switched seamlessly to its gasoline for the remainder of its range--an additional 320 to 518 miles.

The three most powerful vehicles all carried natural-gas tanks containing energy equivalent to 4.0 gallons of gasoline; the more efficient Sonata needed only 2.6 gallon-equivalents, but its fuel efficiency gave it the highest range of all.

There's little to say about the driving experience other than that the vehicles appeared to behave quite normally over a 15-mile driving loop that blended surface streets, stop-and-go traffic, and freeway speeds.

From the driver's seat, the sole indication that the cars were powered on a different fuel came from a few extra lines of digital info neatly integrated into each vehicle's instrument cluster--so neatly done that it appeared to have been designed that way from scratch.

The larger tank impinged on the Chrysler's trunk space, and in the CR-V, it occupied most of the load bay behind the rear seats--a non-starter for many customers in each case.

The development work for the event was funded by the American Natural Gas Association, which sees a role for natural gas as a U.S. transportation fuel.

In working with Carlab, one of the main themes that emerged in speccing out this new kind of powertrain was that it couldn't require compromises to any vehicle's essential qualities.

As a result, from the outside, you'd never know these four vehicles ran on anything other than gasoline.

The trunks and load bays are the same size as factory-built cars, and the natural-gas fueling inlets are hidden away under the same cover as the gasoline filler.

The company's engineers placed the tanks and designed the structures to comply with all current and future crash-test requirements.

Because Carlab works with many automakers on product development, it used its knowledge of structural development and testing procedures to do the work to the standards of production auto engineers, rather than aftermarket conversion firms.

Carlab's experience in creating bills-of-material for future vehicle development projects let it accurately project the costs that automakers would pay for the components of these smaller natural-gas systems when bought in volume.

Their projections don't shoot for the moon; they assume a volume of 20,000 units a year--or about the number of Chevy Volts sold last year.

But whereas the Volt, a compact four-seater, costs $40,000--or roughly twice as much as a five-seat Chevrolet Cruze compact sedan--the price increase for the secondary natural-gas system is much lower.

In volume, Carlab projects, the added tank, plumbing, and fittings would cost $2,600 to $2,900 at a volume of 20,000 vehicles a year. That's less than a 10-percent increase in any of the vehicles prototyped.

The difference in cost between a gallon of gasoline and a gallon-equivalent of natural gas has soared from about 70 cents in 2009 to more than $2.00 today.

That means that the payback period for the added fueling system is only a few years.

One variable remains unknown: The cost of buying and installing a home compressor appliance to fuel such a vehicle.

If it costs $5,000, the payback may never arrive. But, said the natural-gas proponents, if it could be bought and installed for more like $2,000, payback becomes reasonable.

With the prototype vehicles being shown publicly today for the first time, natural-gas vehicle advocates want to get the attention of both policymakers and the public.

This summer, they'll go on tour through regions that already have ample supplies of natural gas--and where sales of bi-fuel vehicles are already established.

The goal will be to get consumers thinking about the idea that they might be to drive large portions of their daily miles on a domestic, much cheaper fuel--in a car that looks completely normal and without having to compromise on performance, cargo space, or any other feature.

With increasing domestic supplies of natural gas and gasoline prices remaining high, the natural-gas industry believes it has a better shot than ever before at saving consumers money.

Natural gas costs have fallen dramatically over 15 years, and there seems to be no sign that they'll rise again anytime soon.

So what's your take on the concept of using natural gas to fuel cars for less than 100 miles, with a gasoline tank as a range extender?

Would you buy such a vehicle? What do you think of its pros and cons?