As predicted last month, and tweeted and teased by CEO Elon Musk, Tesla Motors showed off battery swapping for its Model S electric car at a press event last night.

Held at Tesla's design studio in Hawthorne, California, the demonstration itself was simple: A Tesla Model S drove onto the stage and stopped over a hole in the floor.

Then a replacement pack was moved into position, raised through the hole to sit under the car's floorpan, and reconnected to the car.

The entire process took roughly 90 seconds. The driver remained in the Model S throughout, and pulled away at the 1:33 mark.

Meanwhile, a countdown clock on the video screen behind the car showed a Tesla employee filling an Audi A8 with gasoline at what Musk claimed to be "the fastest gas station in L.A."

After Musk apologized for the length of time required to fuel up the Audi, the enthusiastic crowd of several hundred--largely Tesla owners--laughed when a second Model S drove on stage.

It too had its battery pack swapped from underneath, and managed to drive away before the Audi finished fueling after more than 4 minutes.

If you want another view of the events beside Tesla's promotional video shown above, try this one.

As Musk has noted, the Tesla Model S was designed from the start to enable its battery pack to be quickly and easily swapped out.

Once the flashy part was over, Musk turned his attention to the details. Our brief summary:

"FAST" vs "FREE": RELATION TO SUPERCHARGING 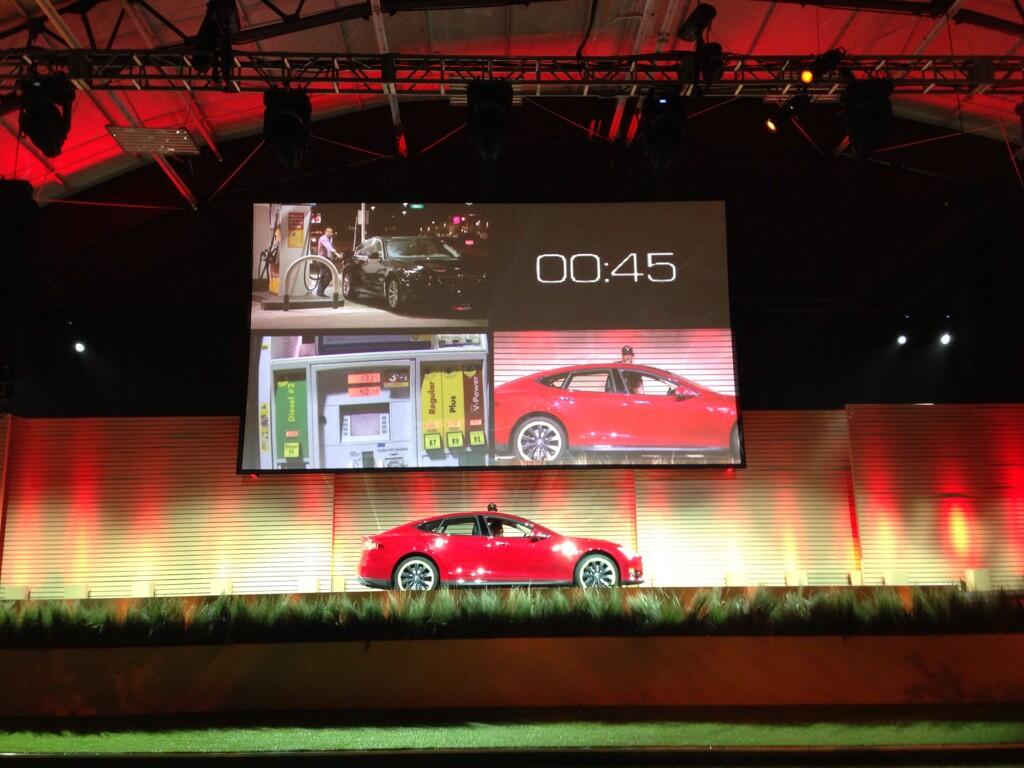 The event was covered by media outlets that included Forbes, GigaOm, TheVerge, and many others.

What's your take on Tesla's announcement? How important is battery swapping to the future of electric cars?