Henrik Fisker is viewed by many in the automotive industry as one of the finest designers of his generation, responsible for stunning cars like the BMW Z8, Aston Martin DB9, and Fisker Karma.

But at a recent TEDx talk where the founder of Fisker Automotive told the audience how he got into automotive design, he drew a tantalizing sketch on stage that hints the firm could be designing a two-door plug-in coupe.

Titled “New Isn’t Easy,” Fisker’s talk focused on visionary designs that have challenged the status quo over the past 100 years, ranging from the Model T Ford through to the Dyson vacuum cleaner.

They, he argued, took a basic concept that already existed and revolutionized it. The same, he postulated, should be possible with modern-day cars.

As a child, transfixed by cars, Fisker admitted that he spent a lot of time drawing cars, often to the detriment of his school work.

It was that passion that eventually led him to enroll in the Art Center College of Design, kickstarting a career in automotive design.

For Fisker however, some of the beautiful and inspirational automotive designs that drew him into the industry have now given way to bland, functional boxes on wheels.

“What’s happened in the last 20 years is that cars have become more of an appliance. They used to be about emotion and fun,” he told the audience. “On top of that, you start feeling a bit guilty about driving a car because it pollutes.”

“So I thought to myself, ‘What if you could create a car that took all of the environmental aspects that we know is possible and basically unite that with the emotional side of a vehicle?’” he continued. “Why do electric cars, or small fuel-efficient cars, always have to look dorky? Why can’t we make a beautiful, gorgeous car?”

Fisker then went on to describe the design process behind his first plug-in hybrid, the 2012 Fisker Karma, admitting that the process was far more complicated than even he had imagined. But, he reiterated, worth it.

To close his lecture, Fisker went over to a sketchpad situated to one corner of the stage, and began to draw.

“New is never that easy, but for those of us who take the risk and jump in the ocean, I think that doesn’t matter. we still feel that it’s worth it to pursue the dream,” he said, drawing a basic outline of a sleek, sporty coupe.

“There are a lot of us out there who believe that dreams are possible,” he concluded, adding a finishing flourish to his sketch. 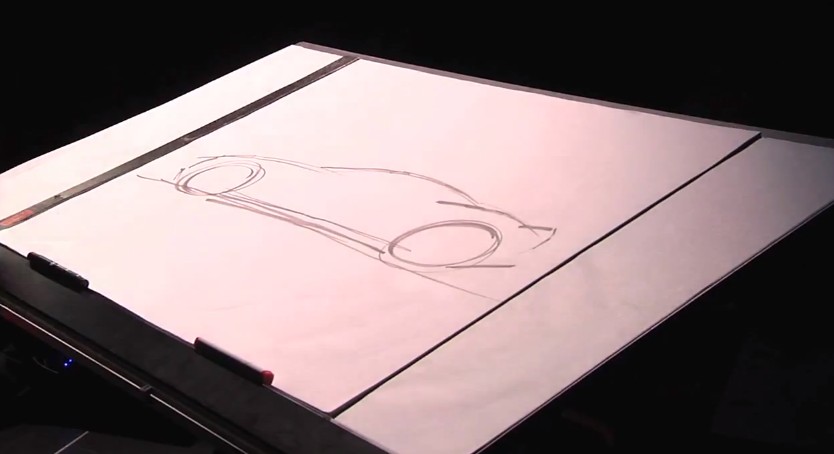 While only a few lines on a page, the large wheels, low, raked hood and flared rear arches obviously makes it a sports car, one that perhaps takes a few design cues from Fisker’s current 2012 Karma.

Just like Autobloggreen, we’re wondering what the real significance of Fisker’s sketch is.

Is it a hint at a new coupe for the plug-in automaker? Or is it just a design sketch done with little forethought along classic sportscar lines?

In all honesty, there’s not enough to draw any real conclusions, but it’s worth noting that after it launches the Fisker Surf Wagon, Fisker has already announced plans for a two-door retractable hardtop model called the Sunset.

Could Fisker’s sketch be a hint at the design of the Sunset, or a coupe-version sibling?

Only time will tell, but with only an admitted sales volume of 1,000 cars globally, Fisker Automotive has a long way to travel before that sketch has the possibility of becoming reality.