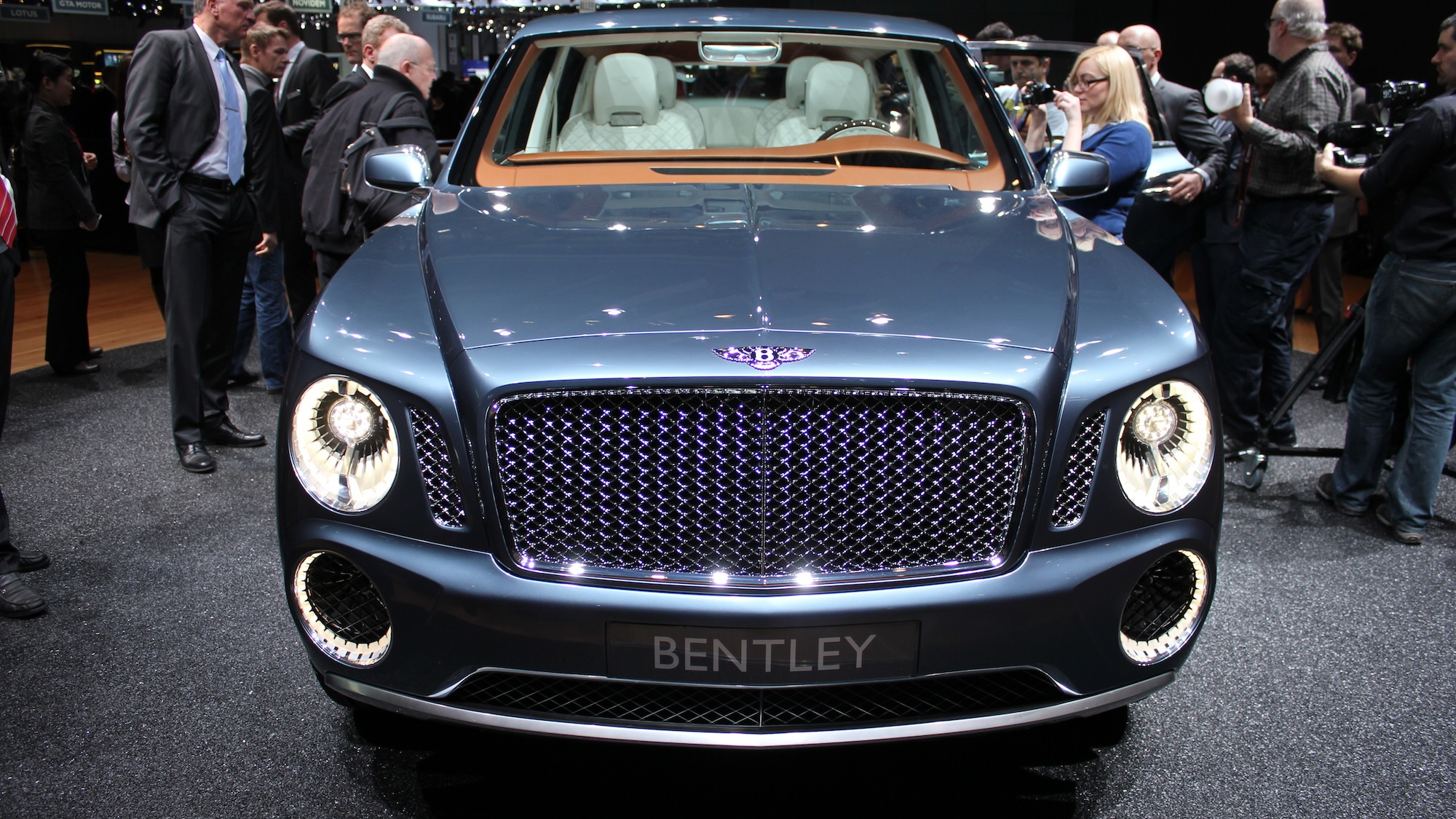 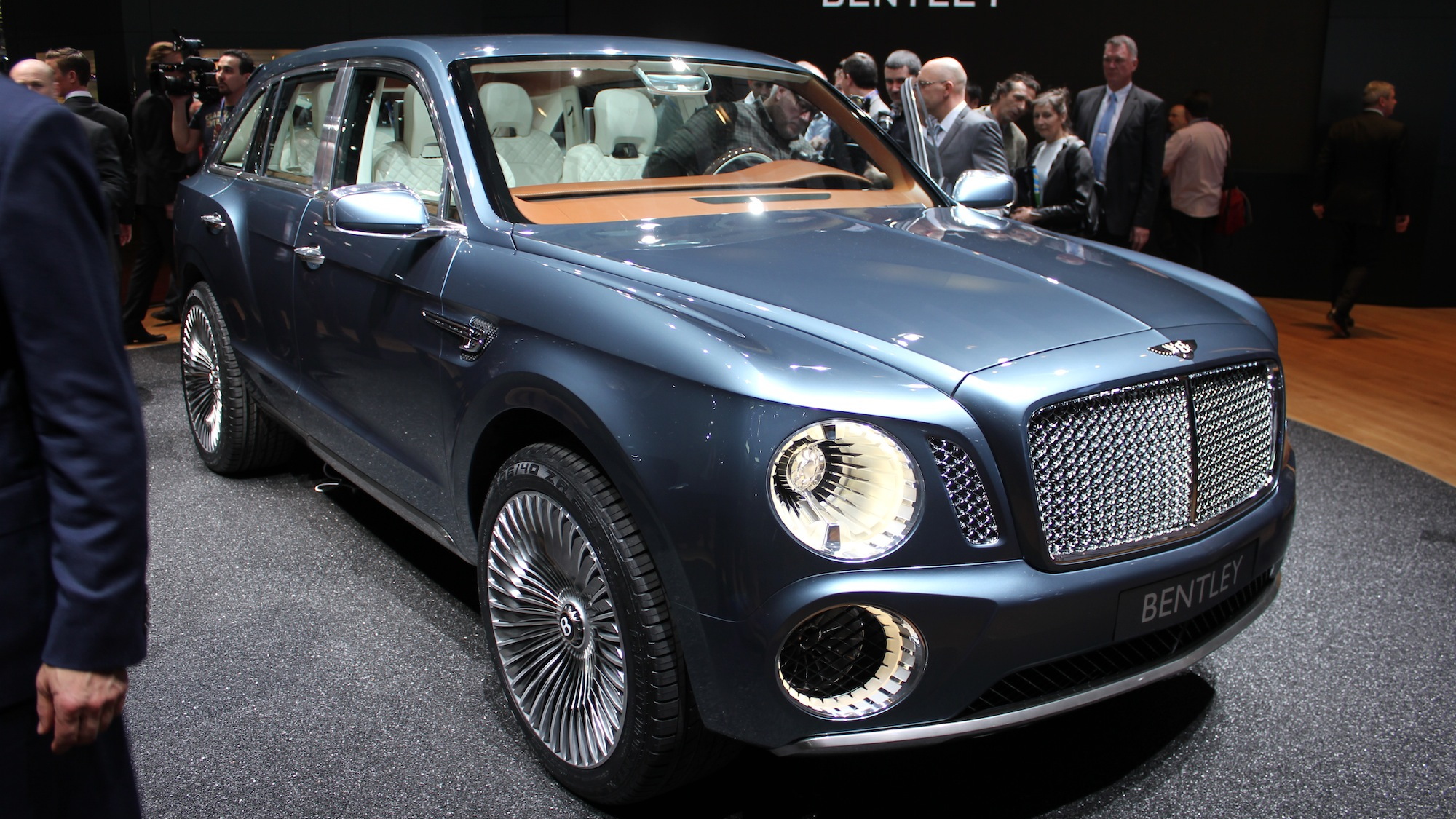 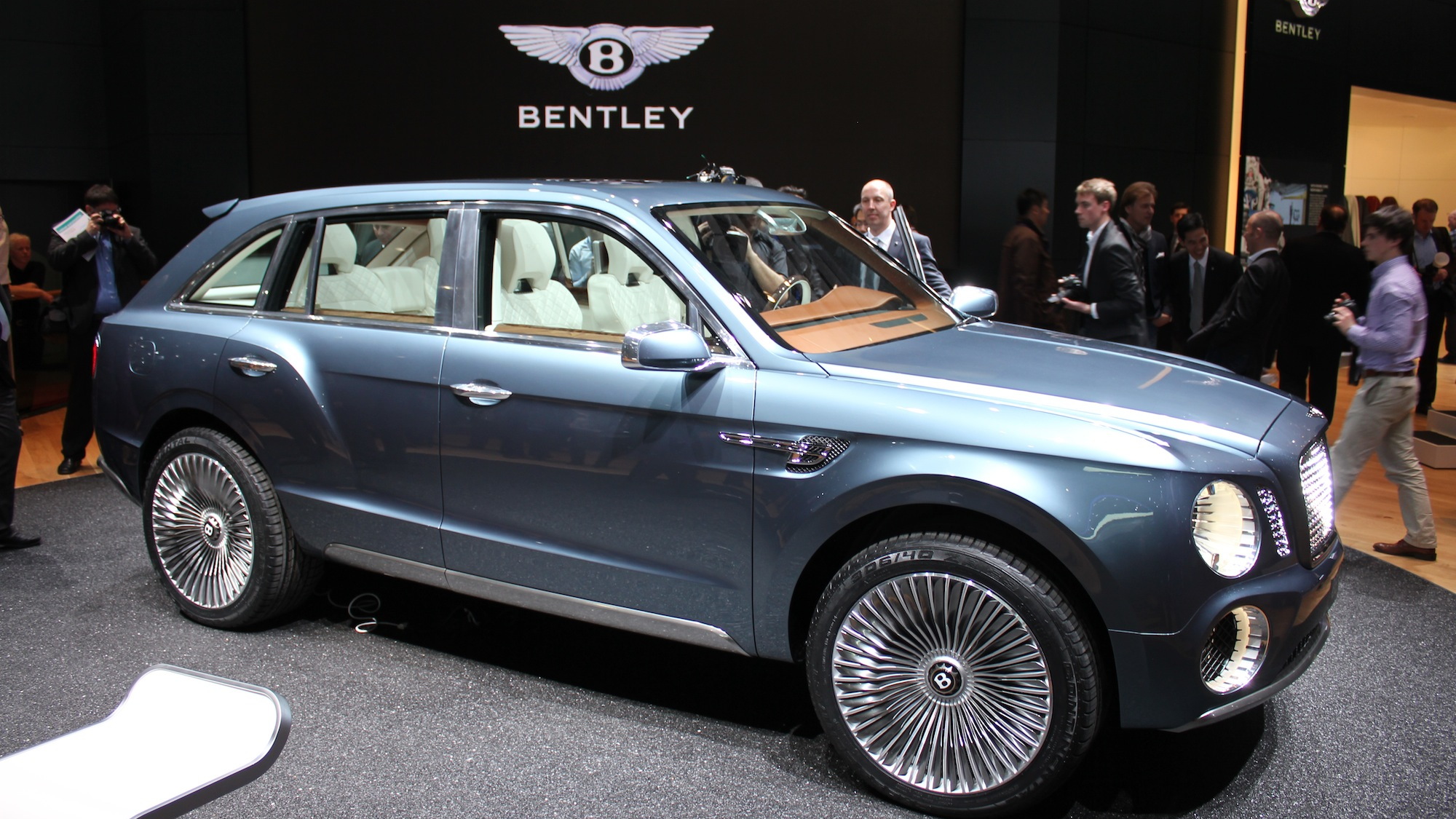 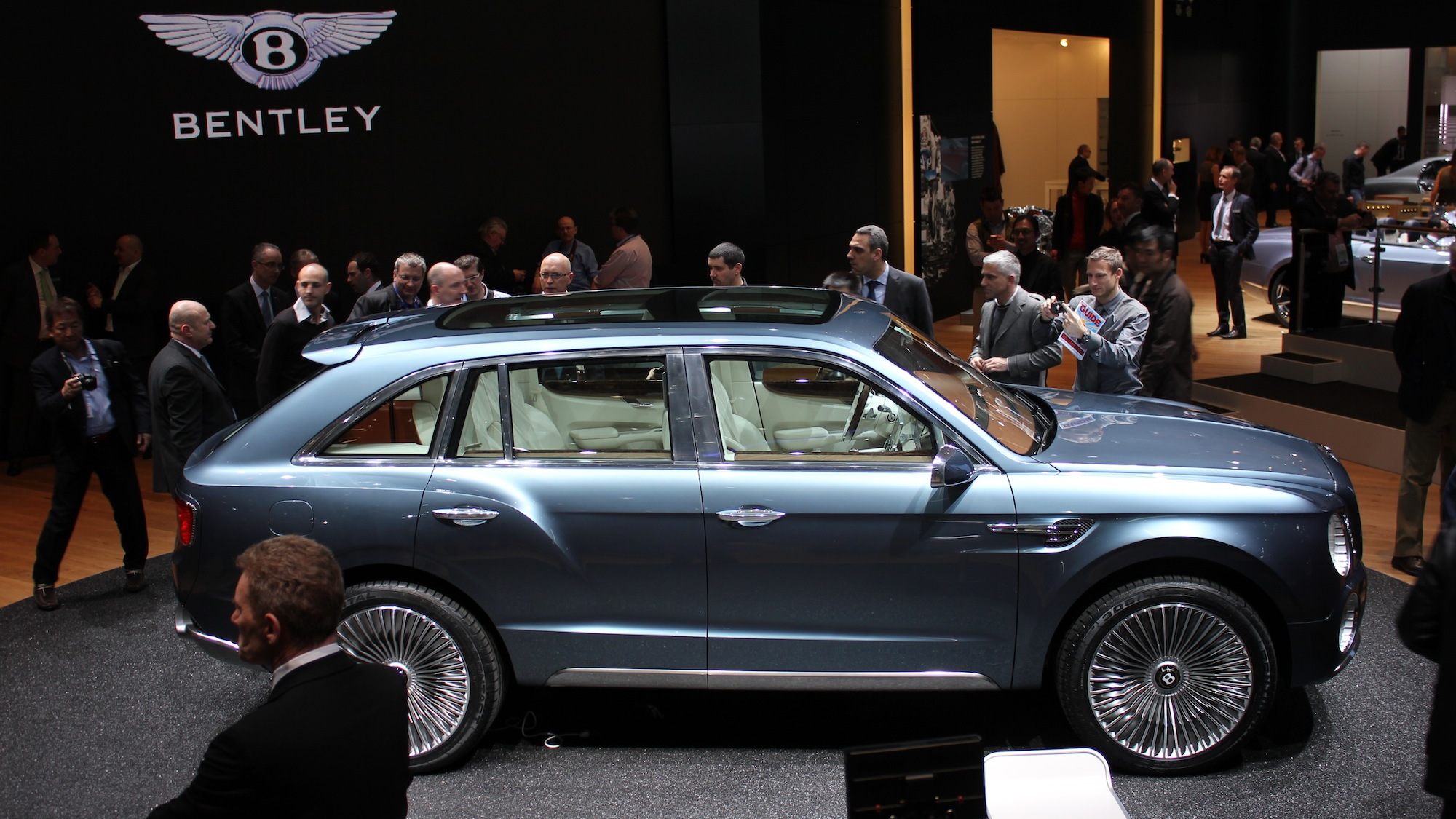 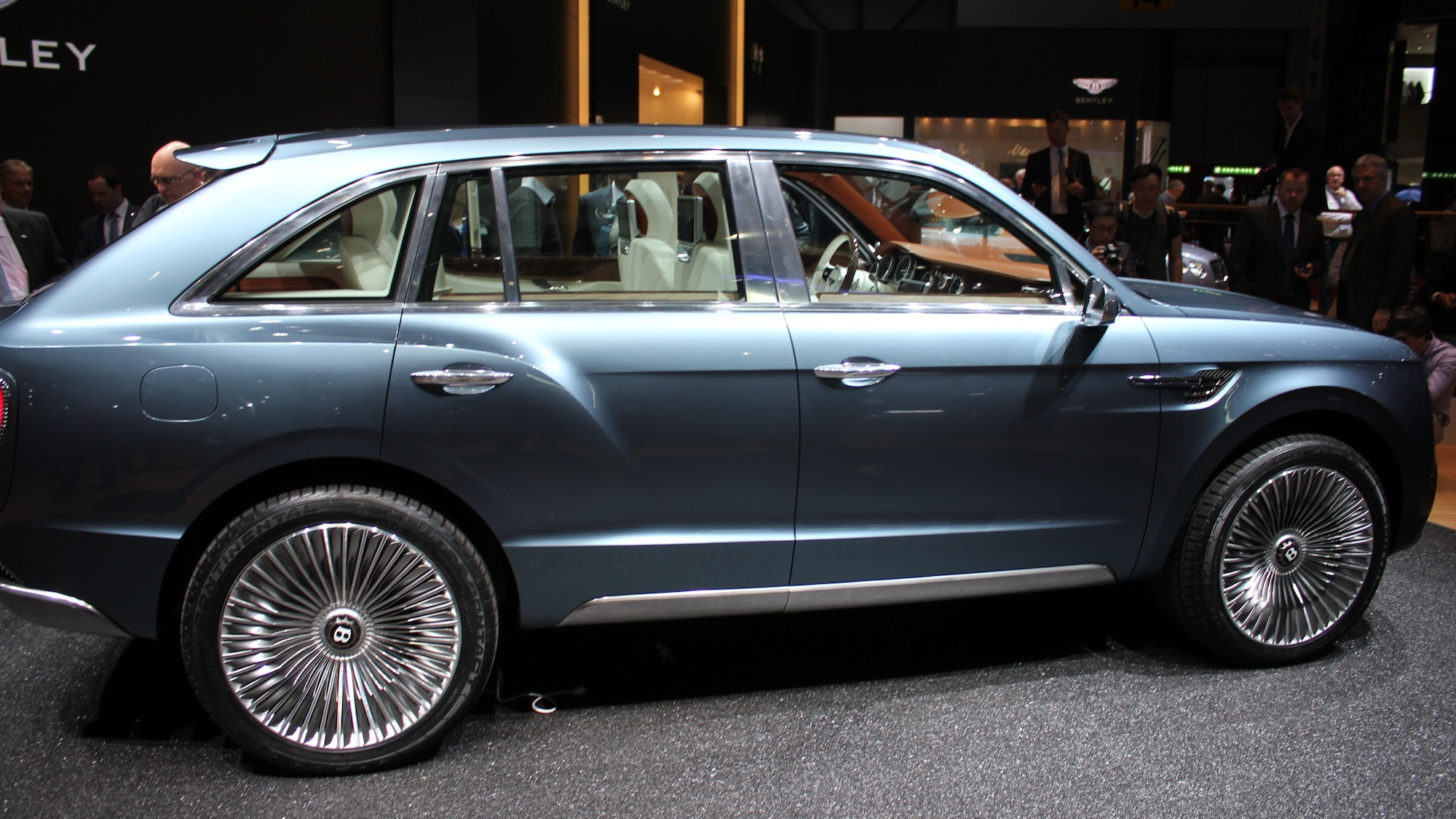 We heard the rumors, but didn't really quite believe they were true.

They are: Bentley took the wraps off a concept for a sport-utility vehicle at today's Geneva Motor Show, the first-ever such vehicle in the 94-year history of the marque.

Assuming it goes into production in a few years, this is almost surely the Bentley that will launch the brand's first-ever plug-in hybrid powertrains, fitted to both its W-12 and V-8 engines.

The reasons for a Bentley SUV are the same as those behind the Audi A7, Mercedes-Benz GL Class, Porsche Cayenne, the upcoming Maserati Kubang, and the longstanding popularity of various Range Rover models: Rich people in developing countries like vehicles from global luxury brands, too.

But sport utilities are often far better suited to marginal roads outside big cities than are luxury sedans or sports cars.

In other words, if Bentley wants to plant a flag in China, India, and Russia, it needs a full-size and uber-luxurious all-wheel drive vehicle.

Like the equally British Range Rover, it is meant to be equally capable ferrying formally-dressed patrons to the opera, transporting them at high speeds on the autobahn, or carrying them across the desert sands in air-conditioned splendor.

The styling will not necessarily be to everyone's taste, though it's quite clearly a Bentley--with some added aeronautical design touches.

Those huge round headlamps and the cross-hatched mesh grille fall right into the family line that includes the new Continental GT coupe and its offspring, plus the low-volume and prodigiously pricey Bentley Mulsanne four-door sedan.

The apertures for the daytime running lights are also intakes for engine cooling, with a turbine-fan design motif also found in the 23-inch wheels.

At the rear, the taillights are intended to be reminiscent of jet fighter engines, projecting a downward beam of light from inside a glowing body.

The Geneva concept uses the 6.0-liter W-12 engine fitted to the higher-end model of the Continental GT.

But the concept crossover is the vehicle that's likely to pioneer Bentley's first plug-in hybrid powertrain, which will offer 15 to 20 miles of electric range (at urban speeds) from a lithium-ion battery pack that can be plugged in to recharge.

That electric range will allow magnates and moguls the ability to drive through upcoming zero-emission zones in the central cities of Europe.

After they're safely through those zones, of course, they can return to their rural estates with all the acceleration and speed that twelve twin-turbocharged cylinders will permit.

Inside, there's the customary hand-stitched leather, gleaming polished wood, and shiny metalwork, with modern technology quietly hidden amidst the opulence. Reversible floor mats are durable leather on one side (for the country), and silk wool on the other (for the city).

The concept offers its rear-seat passengers individual workstations containing tablet computers, and of course the vehicle carries its own Internet connectivity.

Up front, the driver faces instruments depicted on a "glass dashboard," in this case a thin-film transistor (TFT) display. Drivers can request different instruments, data, and running information beyond the traditional tachometer and speedometer.

Bentley will note the feedback on the concept from the Geneva audience and potential buyers, then make a decision on whether to proceed with the new vehicle.

If it goes into production, the Bentley SUV would join the Tesla Model X unveiled last month in a segment hard to imagine even five years ago: plug-in luxury crossover utility vehicles.