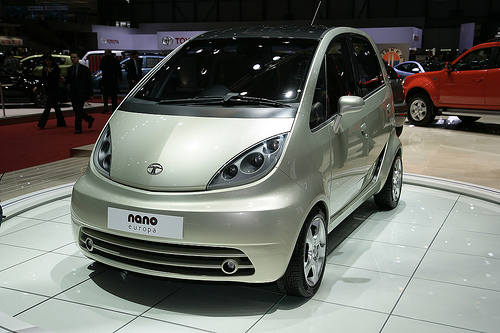 Is the diminutive Tata Nano Hybrid coming to America? According to a report in The Maeil Business Newspaper out of Korea, Ratan Tata, chairman of Tata Motors, says the Indian automaker could sell the gas-sipping four-seater in more established markets like those of the U.S. and Europe.

Tata was tight lipped about the development of the Nano hybrid, but we reported in January that it will likely be equipped with a "stop-start"system supplied by Bosch. This technology will disengage the engine when the Nano is stopped, resulting in a 5% increase in fuel economy.

The Nano is already the cheapest car money can buy, with a base price just south of $2,500. The hybrid variant is expected to be a few hundred dollars more expensive - which is to say that it will easily be the most affordable hybrid available. The European version is expected to hit the market in a couple years, but there's no word on when the Nano might make it stateside.

One wonders how successful the Nano would be in the States, where small cars only seem prevalent when gas prices soar.