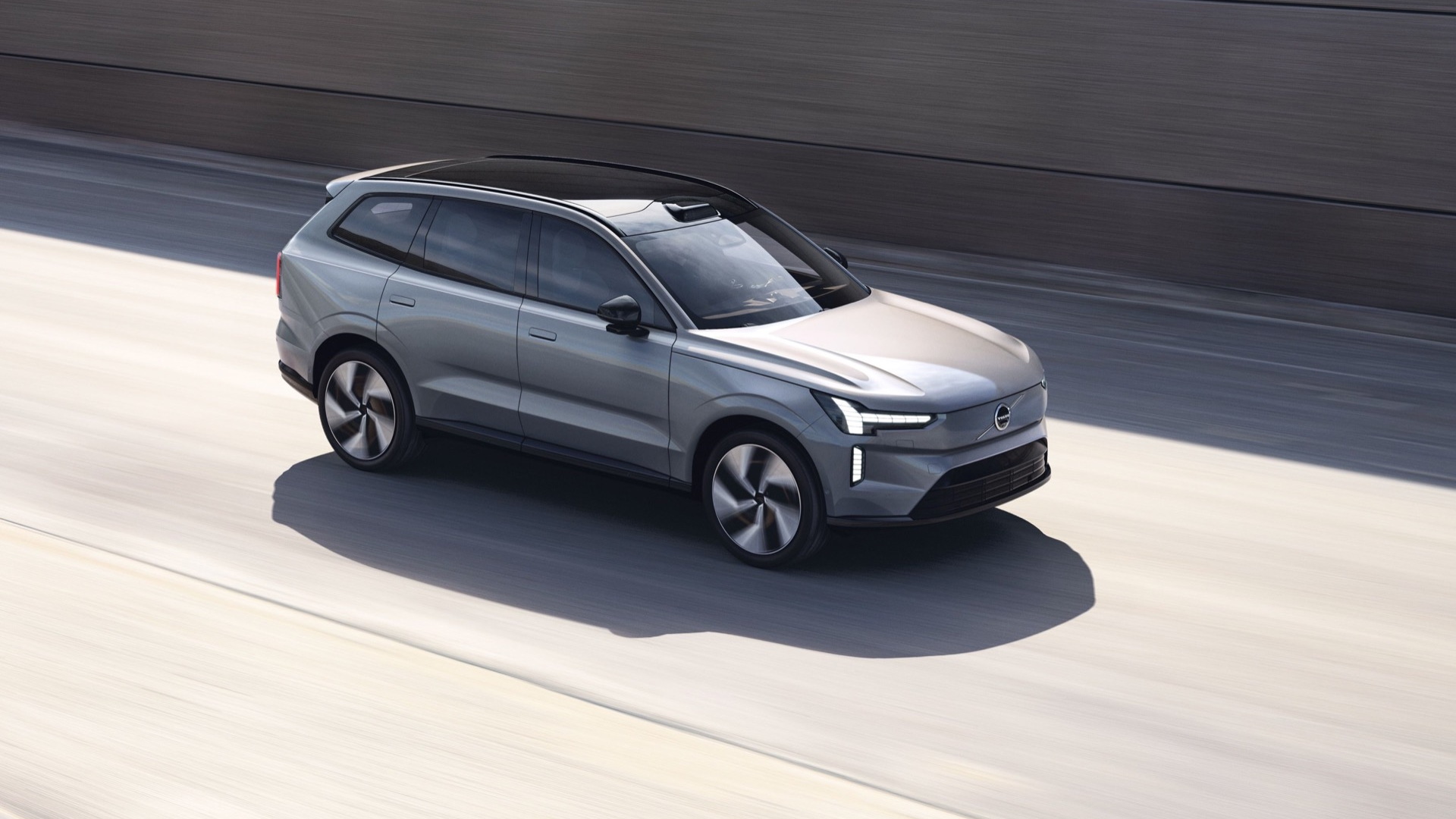 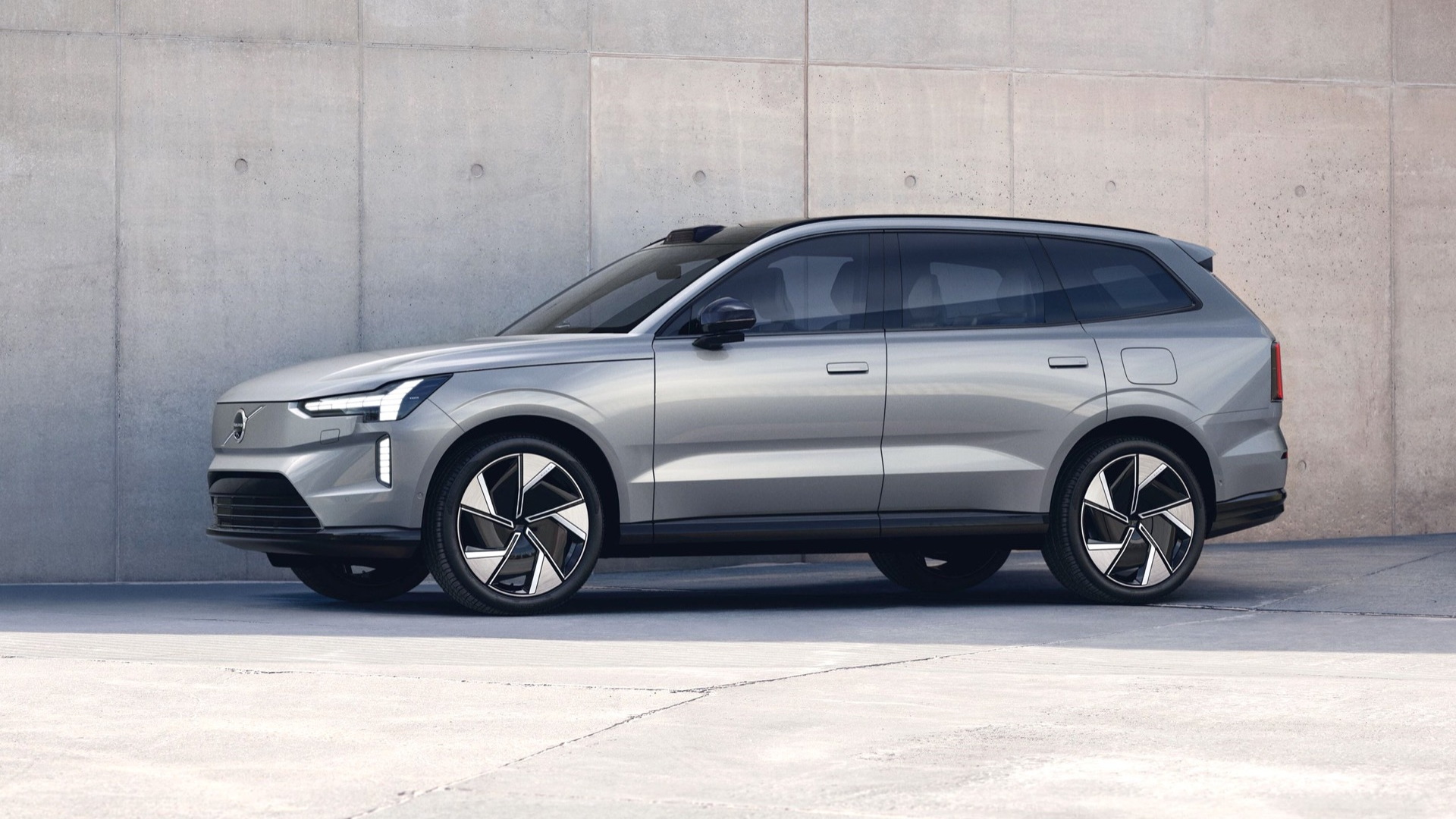 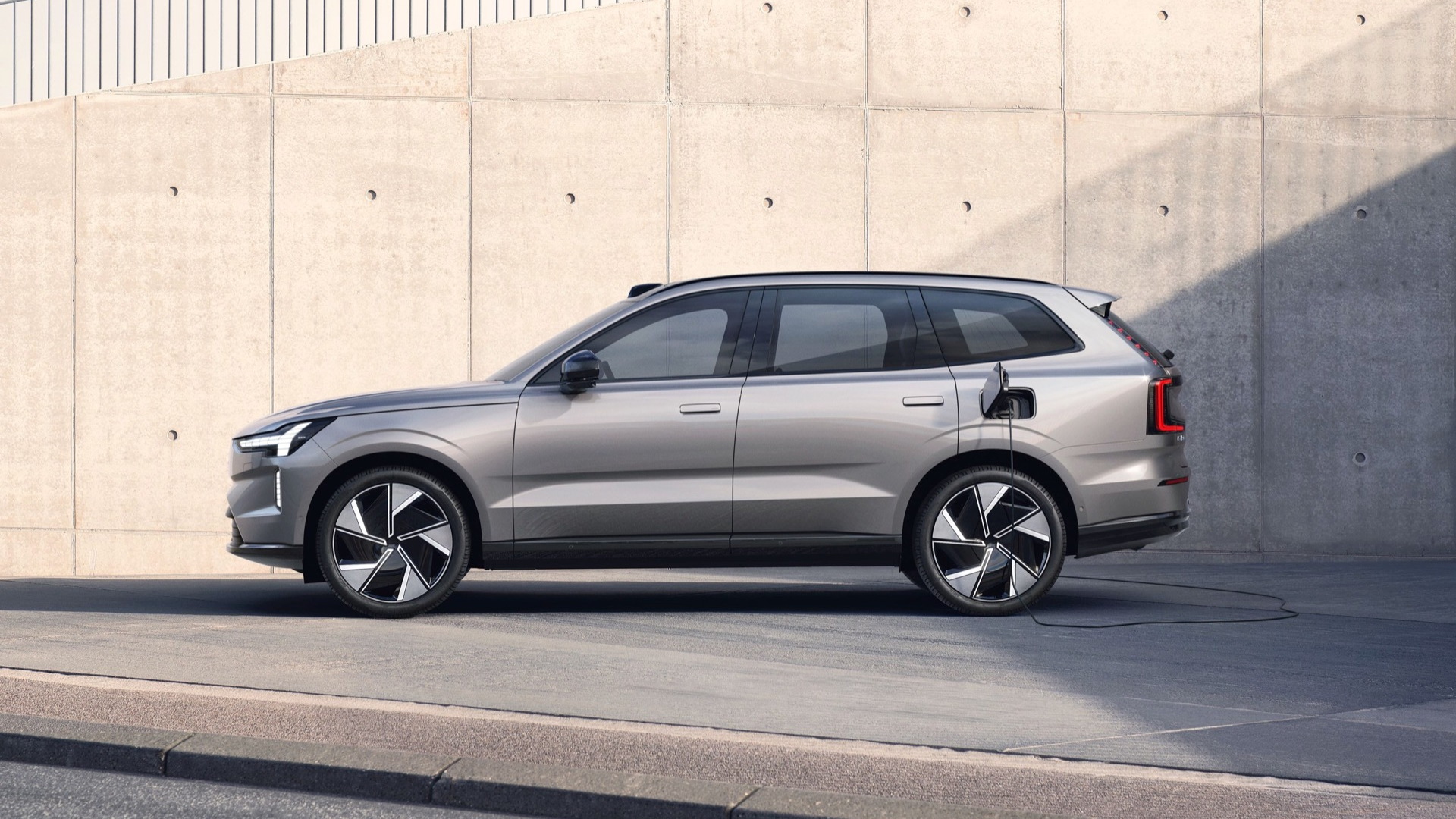 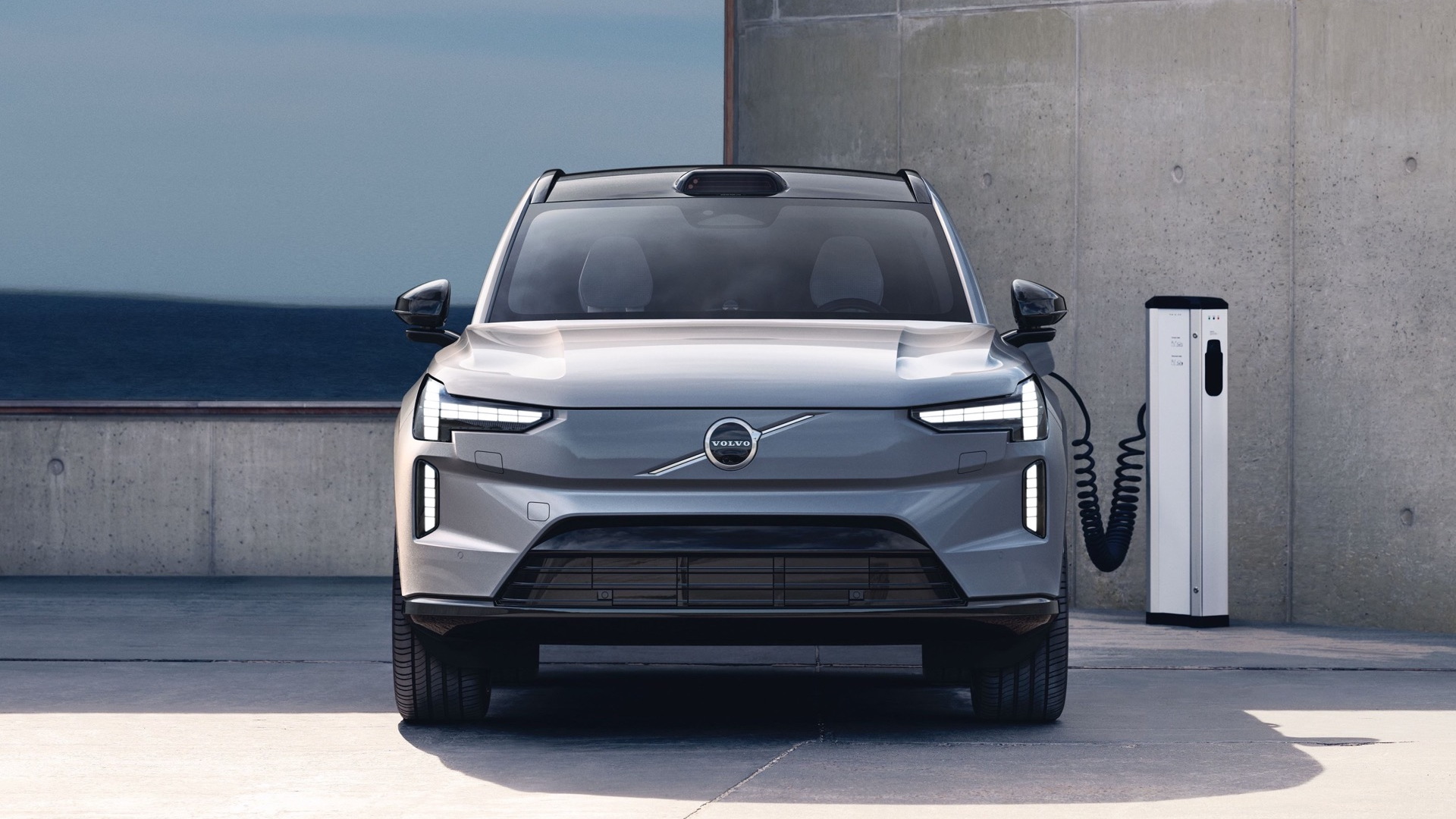 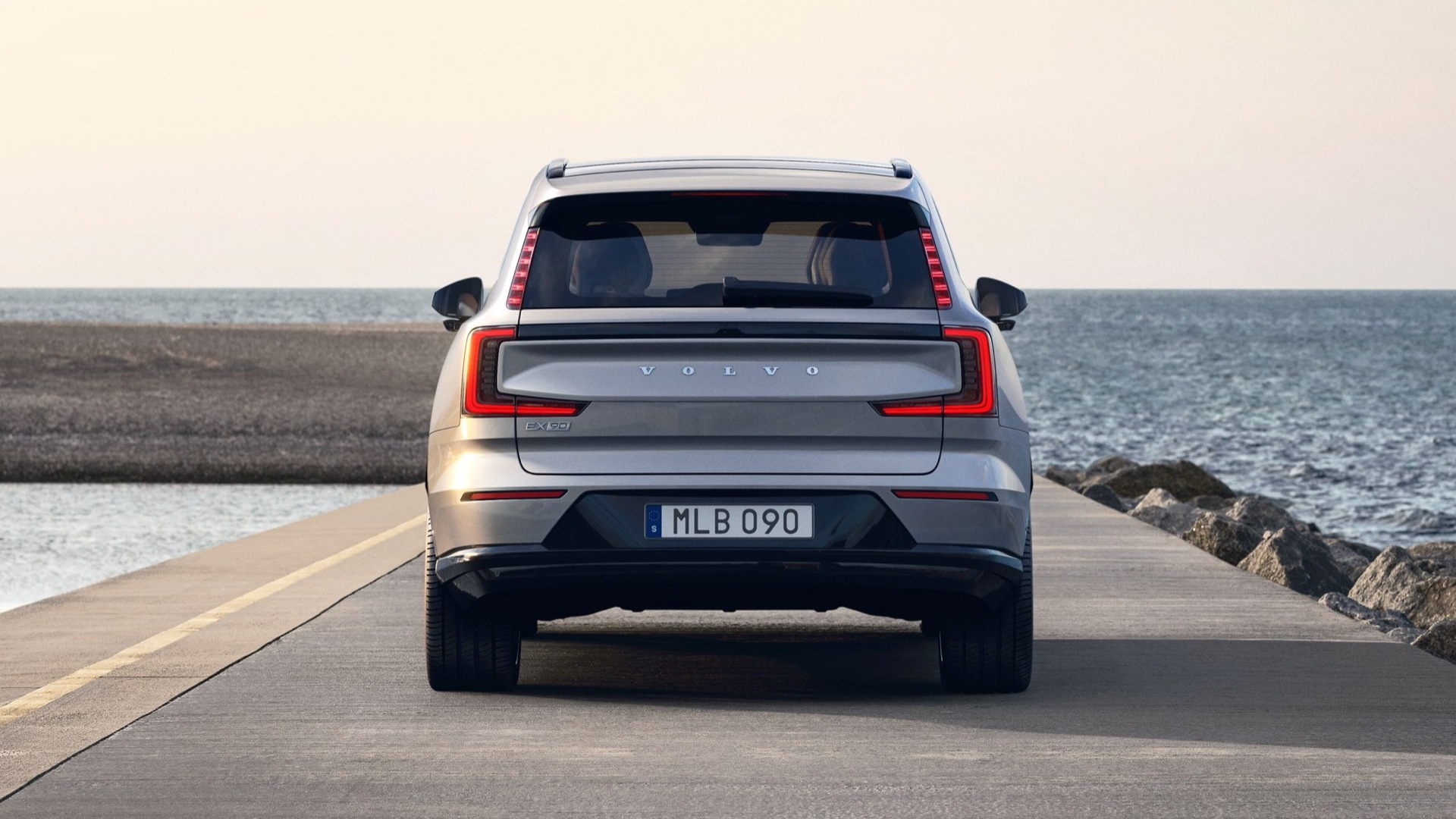 The 2024 Volvo EX90 will be the car that cements the Swedish maker’s pivot into electric vehicles for North America. Revealed to the world Wednesday morning in Stockholm, this new seven-seat crossover points to Volvo's fully electric future while falling into step with the form and function of the gasoline XC90 SUV that redefined the brand.

With three rows of seats and projected range of up to 300 miles, the new large EV (shown here in European trim) is the defining model for Volvo in the U.S. As with the Volvo XC90, which will still be made in parallel with the EX90, it will be followed by smaller siblings that sell at lower prices and in higher volumes—but the EX90 sets the tone for what will follow. Volvo says it will launch one new battery-electric vehicle every year, and will sell only EVs by 2030.

Important for U.S. buyers, the EX90 will be built in Volvo’s assembly plant in Ridgeville, South Carolina, starting next year. That meets one of several new requirements to qualify it for federal incentives under new rules adopted after the passage of the Inflation Reduction Act. It will also be built in China. U.S. customers can configure their cars starting next fall, for delivery early in 2024. Prices for a “well-equipped” EX90 will start at less than $80,000, Volvo said.

Faithful echo of its predecessor

The EX90 isn’t the high-end electric transport previewed by the Volvo Concept Recharge “brand manifesto” design exercise shown in the summer of 2021. Instead, the 2024 model is instantly identifiable as a big Volvo SUV in the vein of the XC90. It’s so faithful to that trailblazing model, it could almost be a mild refresh of that model—until you look more closely at the details.

In profile, the tailgate is slightly more raked and the upper body tapers at the rear. The now-traditional vertical taillights remain, but now they’re separated from the bracket-shaped lower lights, which are connected across the top in a new variation on the trademark Volvo rear.

Up front, a smooth blanking plate with the brand’s large “ironmark” logo continues into more swept-back corners under headlights with Volvo’s “Thor’s hammer” pattern into the fenders. But the body-side and wheel-well sculpting faithfully echoes that of its predecessor, to the point where we expect friends, neighbors, and relatives to see the EX90 as the new model of the XC90 and perhaps completely miss that it’s powered by electricity.

Inside, three rows of seats sit under a full glass roof, providing headroom while shaving a precious inch or two from the EX90’s aerodynamic profile. The central tablet-style touchscreen in is larger, at 14.5 inches, and there are fewer knobs and buttons on the dash itself. We’ll wait to drive the EX90 before we weigh in on how effectively that works. Some other EVs have gone overboard in eliminating hard controls for tap-and-swipe onscreen buttons, to their detriment.

The 2024 EX90 is powered by two electric motors drawing current from a 111-kilowatt-hour battery pack located under the cabin. The standard version has a combined output of 300 kilowatts (408 horsepower), while a “performance version” will have a higher output of 370 kw (496 hp) and 671 lb-ft of torque. Volvo quotes an estimated range of “up to 300 miles” on a single charge, though readers should wait for the EPA range ratings, which aren’t likely to arrive for a year or more.

The company spent quite a bit of the debut on the idea that the EX90 is a “software-defined vehicle,” shorthand for a car whose defining characteristics are determined as much by its operating software as the hardware it controls. As Tesla showed 10 years ago, software by definition can be updated, meaning such vehicles can add new capabilities (as well as fixing any bugs) via over-the-air software updates.

The EX90 will run on Volvo’s own operating system, with software developed in-house running on a pair of central computing platforms from Nvidia Drive AI called Xavier and Orin. Much of what drivers see on the digital screens are running on Qualcomm’s Snapdragon Cockpit Platform. All of it has been integrated to provide the next generation of user interface that replaces the Volvo Sensus system in the XC90.

A front trunk is deep enough to accommodate at least one suitcase in the center, with shallower trays at either side to hold items like a portable charging cord.

It’s all but invisible in a black housing at the top of the windshield, but the EX90 is one of the first vehicles in the world that will offer a Lidar scanner as factory equipment. It joins both cameras and radar sensors to create what Volvo calls a “surrounding shield” of safety.

Lidar is now considered a requirement for advanced levels of automated driver-assistance software, permitting hands-off driving on highways and other roads. Volvo’s assisted-driving function is called Pilot Assist, and in the EX90, automated lane-changing adds to existing functions found in earlier vehicles, including active lane-keeping and adaptive cruise control.

Cameras inside the cabin monitor the driver’s eyes, and the system will provide alerts—of increasing frequency, first “gentle” and then “more insistent”—if it detects distracted driving. If the driver simply fails to respond, the car will stop itself and call for help (the driver heart-attack scenario).

Like many makers, Volvo sees enormous benefits in allowing electric cars to serve as mobile energy storage—for household backup and other functions. The EX90 is the first electric Volvo with that capability built in, though Volvo cautions that it’ll be made available “later” in certain markets.

For fast charging, the company says the EX90 will charge from 10 to 80 percent in about 30 minutes. That is, of course, under ideal circumstances that include battery temperature, ambient temperature, and a charging station that can deliver the required current.

Much more remains to be learned about the 2024 Volvo EX90, and the company will have more details as the U.S. launch gets closer. Meanwhile, we now know what it looks like and some of the technical details. Owners of current-model Volvo XC90s will likely be reassured—and excited.